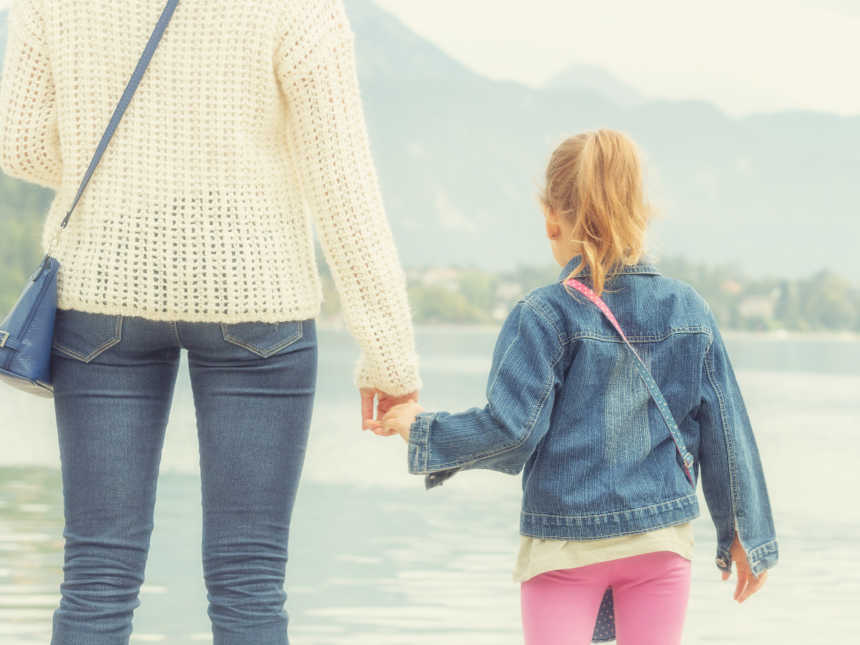 I’m a mom and a stepmom. I know both jobs are two of the hardest, sometimes most thankless jobs on the planet. But one of those roles has been more of a personal challenge for me than the other. Can you guess which one it is?

Yup — it’s the stepmom one.

I went through the first several years in my stepmom role trying way too hard, beating myself up at every perceived failure, and ultimately reaching my breaking point more than several times.

For those first years I was pretty much a full-time stepmom. It was hard. It was overwhelming. Summer and Christmas breaks were rough, especially after I had my own baby. School pick ups and events for my stepchild were often difficult to manage with a newborn in tow.

I was pulled in a lot of different directions trying to show up, be there, and fulfill the needs of a child who needed their mother as well as being a new mother to my own child. But time and again, I got it all done.

After I quit my job to care for the kids full time and my husband started working longer hours, I started to feel like I was on an island alone. The isolation of being a stepmom to a young child was actually worse for me than being a new mom struggling with sleep deprivation and breastfeeding challenges.

There were times I wished I could quit being a stepmom. There was resentment (which is one of the ugliest emotions a person can experience). It took every ounce of patience I had sometimes not to lose it.

But I didn’t lose it. At least not in front of anyone. And there was a good reason for that which kept me hanging on to sanity. I knew in my heart that somewhere down the road all of the dedication and all of the holding my sh*t together would pay off.

And now it is.

Seven years later I can see all my seeds of love, time, and effort blooming into what is a truly wonderful relationship with my stepchild. Our relationship isn’t perfect but I believe it’s grown in a healthy direction because I took the time to nurture it and hung on for dear life when quite often all I wanted to do was escape from it.

I’m an incredibly devoted, passionate, and highly involved stepmom. I’m also that way as a mom. And as a person. That’s just me. I can’t help but be a passionate stepmom. It’s in my nature.

Should I have given myself a break all those years ago when I was practically bending over backward for everyone as a stepmom while also struggling with my own child? Yup. Should I have asked for more help? Sure. But when it comes down to it, the kind of woman who takes on the stepmom role has been called to it for a reason. It may not even be a reason that’s realized at first. That answer will come in time.

I’ve discovered that every problem that’s come up in my role as a stepmom has taught me more about myself than I could ever have imagined. Every time I hit a wall and wanted to quit, I had to pick myself back up and learn a new way around a problem that was productive and healthy for my stepchild. Just as having your own child teaches you that it’s not just about you anymore, so does having a stepchild — especially one you’re very close to.

You can be a good person and still struggle with being a good stepmom. It comes with challenges and dynamics which most of us are not born knowing how to handle.

A good stepmom is not made — she is built. She is built by the hardships of her role, the tears she cries in secret, and by the lessons she learns by trial and error.

The passionate stepmom lives in all of us. She makes mistakes. She has strong opinions that she often can’t express. She remains quiet when she wants to scream. She makes sacrifices others may not be capable of. She learns how to love in many different ways. And she gives. She gives her heart, her soul, and her life to making sure a child she didn’t give birth to smiles, has wonderful memories, and — most importantly — feels loved.

This story was written by Michelle Zunter of The Pondering Nook. The article originally appeared here. Submit your story here, and be sure to subscribe to our best love stories here.

“My husband is funny, thoughtful, nerdy, outgoing, caring, and sweet. Everyone who knows him knows this. But still, it could have been him.”

‘It’s too soon. No one would approve.’ I met K at the wrong time. At 26, I had already been married 6 years, parented 7 children and miscarried 2 babies.’: Woman gets real about dating after divorce

“My phone vibrates in the middle of my text. It’s an unsaved number. I just stared at my phone. ALL I could think about was the tall handsome dude at the store, whom I didn’t even catch the name of.”

‘Why did my parents break up anyway?’ It took me by surprise. I wanted to be honest.’: Stepmom caught off guard by stepdaughter’s ‘tough questions’ over dad’s relationship with ex

“I put my stepdaughter’s plate on the table. She looked at me. ‘Is being a stepmom really hard?’ All I could think was, ‘we don’t have enough time in the day.’ I braced myself for more. She sat for a minute, eating her eggs and fruit. I thought I was in the clear. Wrong. Here came the hardest question. ‘Why did my mom and dad break up?’ she asked. ‘Uhhhh… Uhhhh… Uhhhh…’ I couldn’t give her all the dirty details.”