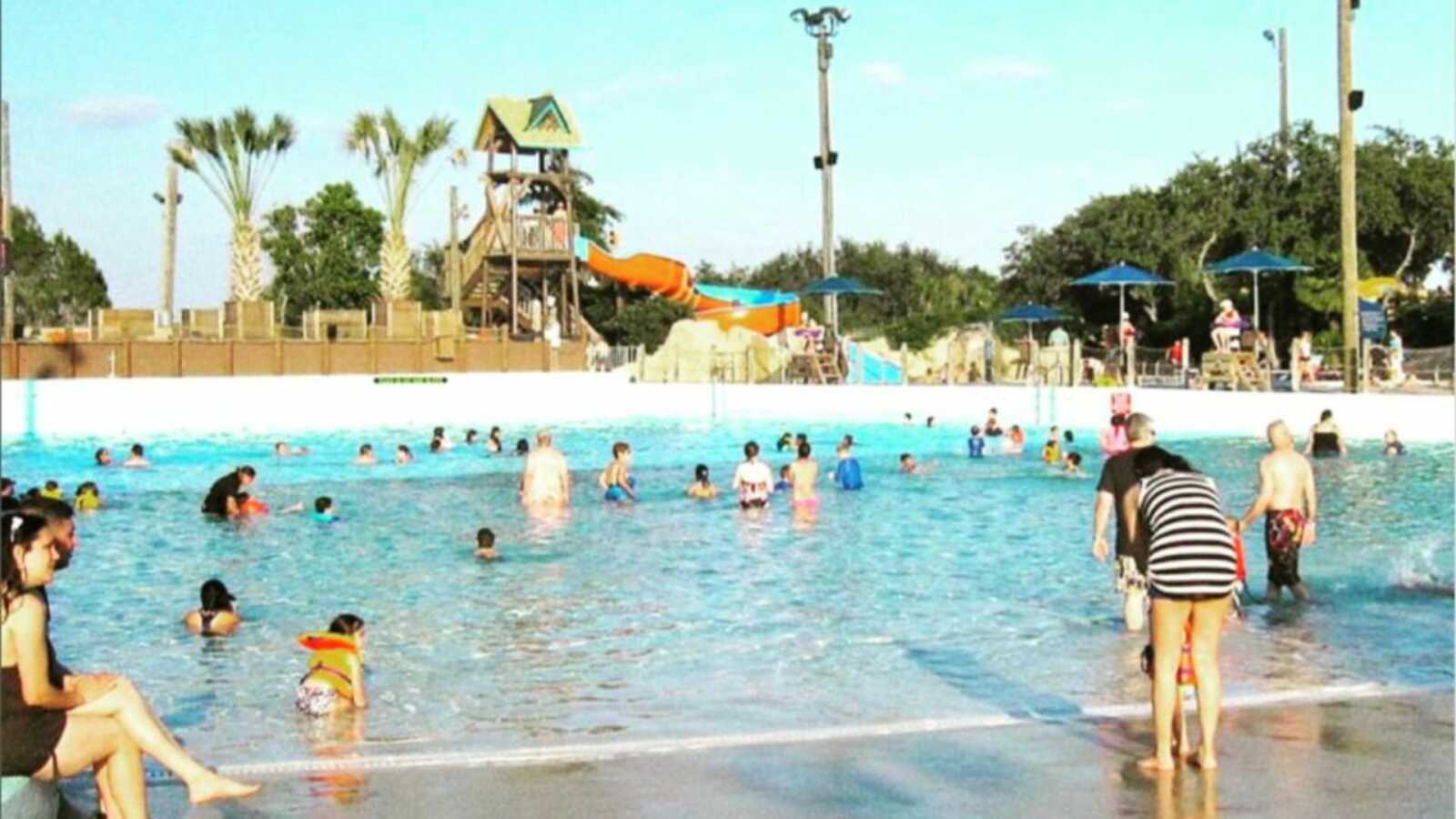 “My mother very kindly bought my 7-year-old daughter and I season passes to a local water park this year.

We had only been a handful of times while temperatures soared above 100° this summer, but decided to take advantage of a slow day at the park last Friday morning.

Most other kids were back in school and the temperatures had finally dropped a bit, so we swam for hours, fueled by soft pretzels and Hi-C.

One of the places we spent the most time at was the wave pool. I’d squat down to my daughter’s height in the water and together, we’d jump with and into the waves, over and over again. After a while, she noticed one area of the pool where the waves were crashing down harder and insisted I pull her to that spot while she floated there in a Superman pose.

Once we arrived, the waves were a LOT. They were crashing down, getting into our eyes and noses, and just generally beating us up. At one point, my daughter received an especially big splash in the face and seemed a little shaken up. We were far from the wave pool exit, so I grabbed her by her life jacket and lifted her up and down with the waves while she recovered.

While I was lifting and lowering her, I was getting beat up…slapped in the face by waves, nearly pushed over several times. I was feeling frustrated when I suddenly remembered…why was I still squatting down in the water?! I immediately stood up and realized at my full height, the waves were annoying but manageable.

It turned out that after squatting and floating on my knees for nearly an hour,  I was so accustomed to it that I forgot I was a full-size adult. I shrugged in stupid amazement as I told my daughter, ‘Hey! I just remembered I’m tall!’ and we both cracked up laughing.

But friend…how easily do we forget who we are? We often spend so much time surrounded by drama or small minds or angry words or pettiness or whatever…that we forget we’re bigger than that. That we can just…stand up!

Stand up and save your friends and family from that mess. Or just stand up and leave it altogether; but whatever you do, don’t allow those negative surroundings to slap you in the face, push you over, or try to drown you. Don’t allow them to bring you down to their level.

Instead friend, remind yourself of who you are, who you were created to be, your purpose, your value, and your birthright. Your own two legs.

Stand up, because the waves aren’t stopping any time soon.”

This story was submitted to Love What Matters by Deb Preston. You can follow her journey on Facebook and Instagram. Submit your own story here and be sure to subscribe to our free email newsletter for our best stories, and YouTube for our best videos.

‘Can I let you in on a little secret? I hosted Easter dinner last weekend…and I didn’t cook any of it. My BFF, Cracker Barrel, did.’: Woman shares reminder ‘life isn’t about perfection’

‘Once again, Mary was at the back of the class, watching everyone else have fun.’: Mom shares heartbreaking photos of disabled daughter excluded from school Easter egg hunt

‘Easter is not about eggs, bunnies, that new dress, or even a packed church.’: Woman says ‘may it change the way we look at Easter forever’

In Our House, We Chose The Dinner Table