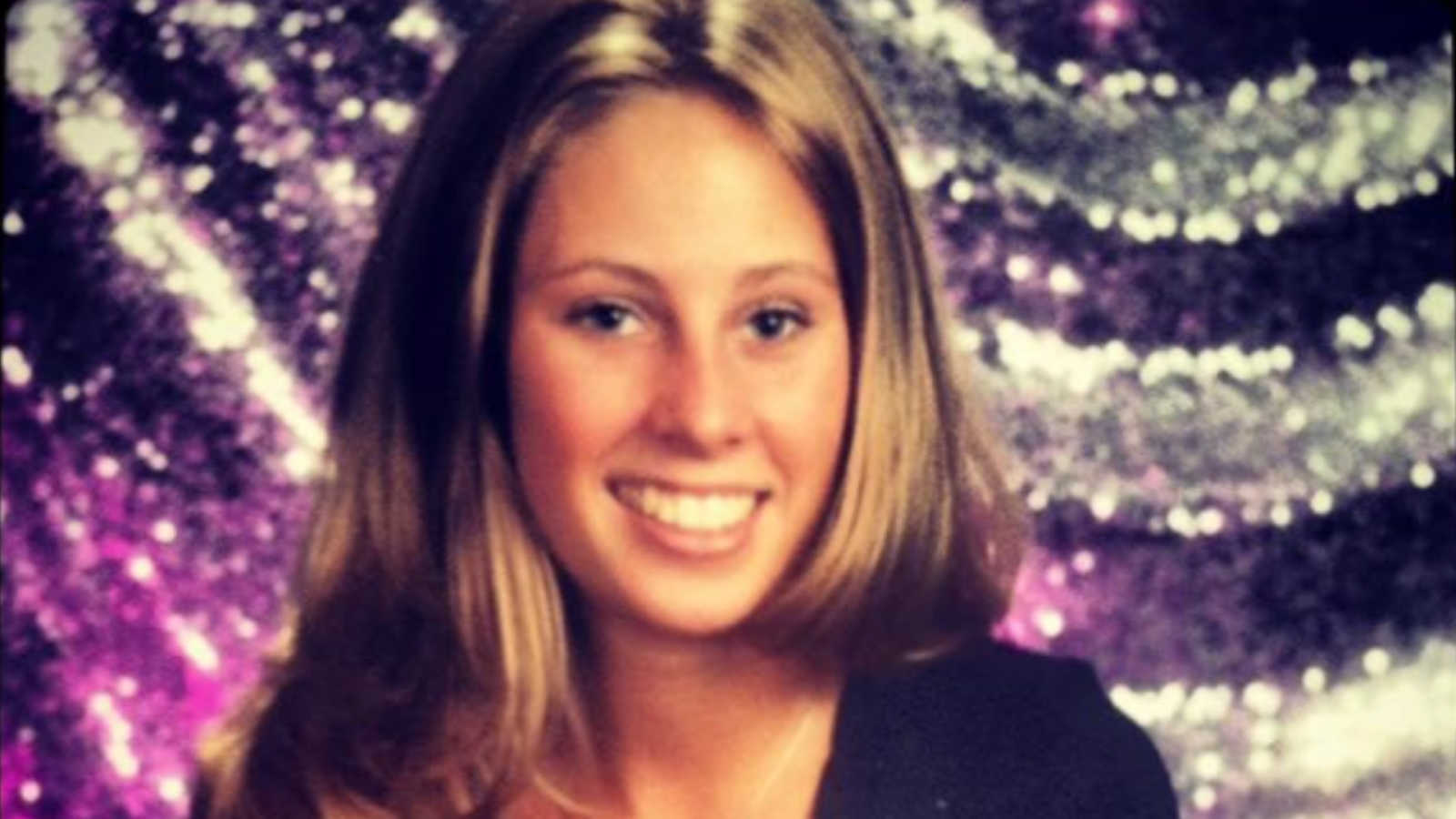 “Every year when the first breeze of brisk fall air smacks me in the face, I get a sinking feeling in my stomach. Maybe its seasonal depression, back to school blues? (Although, I am no longer in school)… or maybe it’s because it’s football season and my sister was a star cheerleader and I idolized everything about her. And also because October is her birthday month.

Self-medicate: To choose and take medicines oneself, rather than by prescription or on expert advice.

That’s how it all started.

Kerri-Ann internally battled demons and insecurities as a young teen and beyond.

Have you ever gone on a first date, and before you left, decided to take a shot or have a glass of wine to loosen up your nerves? This is how it all began for my sister – except she wasn’t just taking a shot of vodka before a first date. She began drinking in any possible situation because she felt that this brought her the confidence she needed to show her outgoing side and to be likeable. Kerri-Ann battled depression and anxiety – neither of which she spoke of, probably out of fear, shame and embarrassment.

A staggering amount of individuals end up with a substance use disorder that stems from mental health issues. It’s as if drinking alcohol or popping a pill alleviates any mental struggles, for a short time, that is.

Kerri-Ann battled her mental health issues beginning in high school. My first memory of realizing that my big sister was sick was when she tried to commit suicide senior year of high school, the week after New Year’s Eve. I was still pretty young and my parents tried to keep the details of what was going on from me. I had thought my sister was sick with an extremely severe case of the flu. To be honest, my parents thought this was the case as well for the 2 or so days that Kerri-Ann didn’t leave her bed and was throwing up profusely. Our other sister had a hunch that Kerri-Ann had taken some pills. She was correct – Kerri-Ann swallowed a whole bottle of Extra Strength Tylenol in hopes she would not wake up. She was rushed to a hospital in Boston. Both immediate and extended family gathered in the waiting room of the hospital because there was a chance my sister wasn’t going to make it.  They had brought the hospital Chaplain in for support during the difficult time. It was scary to say the least. By the grace of God, Kerri-Ann pulled through. The following days, weeks, and months were extremely difficult. Kerri-Ann was embarrassed, as rumors spread throughout the high school and she did not want to return to school, her senior year; only a little over 4 months left until graduation. Kerri-Ann was an outstanding student. Her high school guidance counselor and the school principal made a visit to our home and talked her into going back.

Shortly after graduation, Kerri-Ann got hooked on OxyContin and did not make it back to her second semester of college.  She had her own apartment at this time and she was starting to struggle in most areas. I’ll never forget wanting to hang out with her at her apartment, which she was fine with – but this one particular time, I walked in on her in her room while she was snorting powder off of her night stand.  I was angry and I don’t think I ever returned to her apartment. I also kept this to myself, because being the younger sister, I didn’t want to be a ‘snitch.’ I still had no idea she had a drug problem.

She came home to live with us shortly thereafter. One January week night, my mom, my boyfriend and I were sitting in the living room on the couch watching ‘American Idol.’ We heard this loud, echoing bang above us in the bathroom. It sounded like the sink had fallen off of the wall. Thirty seconds later, this scream came from upstairs. I can still hear it to this day. Everyone rushed up the stairs and I followed. Before reaching the top of the stairs, I ran back down, ran up a few stair . . .then ran back down a few. Until I finally pushed myself to get up those stairs. There she was, my big sister, after being clean and sober for quite some time, was overdosing and having a seizure on the bathroom floor. The horrifying scream came from my other sister, who found her first. When paramedics arrived and my sister became conscious – her first words were a distraught ‘Where is Heather?!’ – You see, my sister battled and struggled to the extreme, but the one thing she continuously tried to do was protect me from seeing what she was going through, just like she had always protected me since the day I was born. I still have an immense amount of respect for her for hiding the disturbing experiences from me to the best of her ability. But this time, it didn’t work and I suffered from severe anxiety and PTSD following the incident.

The following years consisted of ‘the addiction cycle’ –  detox, rehabs, outpatient programs, months of clean/sober time, MAT, and relapse… only to begin all over again. I was so angry during these years. I genuinely felt that disappointment was worse than being sad and heartbroken. You would get your hopes up, only to watch them crumble over and over again. I went through a stage of being angry and mean towards my sister – although it is no excuse, I was young and didn’t understand addiction as I do now. I was uneducated. So many questions went through my mind. How could she steal from me, from us? How could she choose drugs over her family? Why didn’t she want to spend time with me anymore, like we used to?  Why did this even happen? I grew up in the same home as her – I would never do drugs. I could not find the proper coping skills as a young teenager to handle my emotions. I was that girl who left the house whenever something bad went on and I avoided situations at home as much as possible. I have a lot of regret in me because of how I acted during these years. I wish I understood addiction back then as I do now. I wish I were older and had the resources to help her, as I do now. It just didn’t make sense to me. She was beautiful, intelligent, popular, athletic, driven. HOW DID THIS HAPPEN?

On April 30th 2010, my sister was found by housekeeping at a hotel, left for dead. I got the phone call to pick up her things at the hotel. When I arrived, I was told her stuff was still ‘upstairs.’ I’m thinking, maybe packed in the hallway near the room. No. I was escorted to the room where she was staying – my best friend was with me and entered before me. She begged me not to come in. I did anyways – I had to see for myself. It was like a crime scene straight out of Law & Order. There was blood all over the sheets and the comforter had fallen to the ground. All of my sister’s shoes were neatly lined up next to the footing of the bed. Her clothes were hung up and her beauty products were organized on the bed stand and in the bathroom. My heart was broken. Lost, in a battle with depression and addiction – she was still extremely organized and clean. I will never ever forget this day – it is implanted and forever vivid in my memories.

It will be 9 years in April 2019 that we lost Kerri-Ann to addiction, at the young age of 26.  This year, instead of pondering the ‘what ifs’ I decided to start a scholarship in her memory – The Kerri-Ann Blampye Memorial Scholarship. Even through all of the hardships, my sister still managed to graduate top 10 of her graduating class.  I can’t think of a better way to make tribute to my sister than to help students in need through her memory.

I wrote this poem in my first college writing class. It’s in the past tense – but Kerri-Ann was still alive at this point. It is absolutely heartbreaking to look back and read this knowing she wasn’t even dead, yet the reader would assume she was.

Gleaming, bright blue eyes
Flawless, long blonde hair
The perfect teenage body
With a smile to die for
You had the look many girls wished to have

A smile appeared from ear to ear
Whenever you wore that uniform
You could reach the stars
When you were tossed into the air
Cheerleading was your passion
And perfect you were, at that
You lived a life many people imagined to live

Beautiful, talented, smart
Is how you were described
‘I don’t see these things when I look into the mirror’
Many thought you were selfish
Some thought you were ungrateful
No one understood you
You suffered from an illness no one would want to endure

Read more stories from those battling with addiction and loss:

This is an exclusive story to Love What Matters. For permission to use, email Exclusive@LoveWhatMatters.com

This story was submitted to Love What Matters by Heather Blampye. Submit your story here. Subscribe to our free email newsletter here.

6 Signs Your Partner’s Narcissistic Parent Is Affecting Your Relationship

“If these red flags resonate with you, it is time for your partner to get un-enmeshed with their parent.”