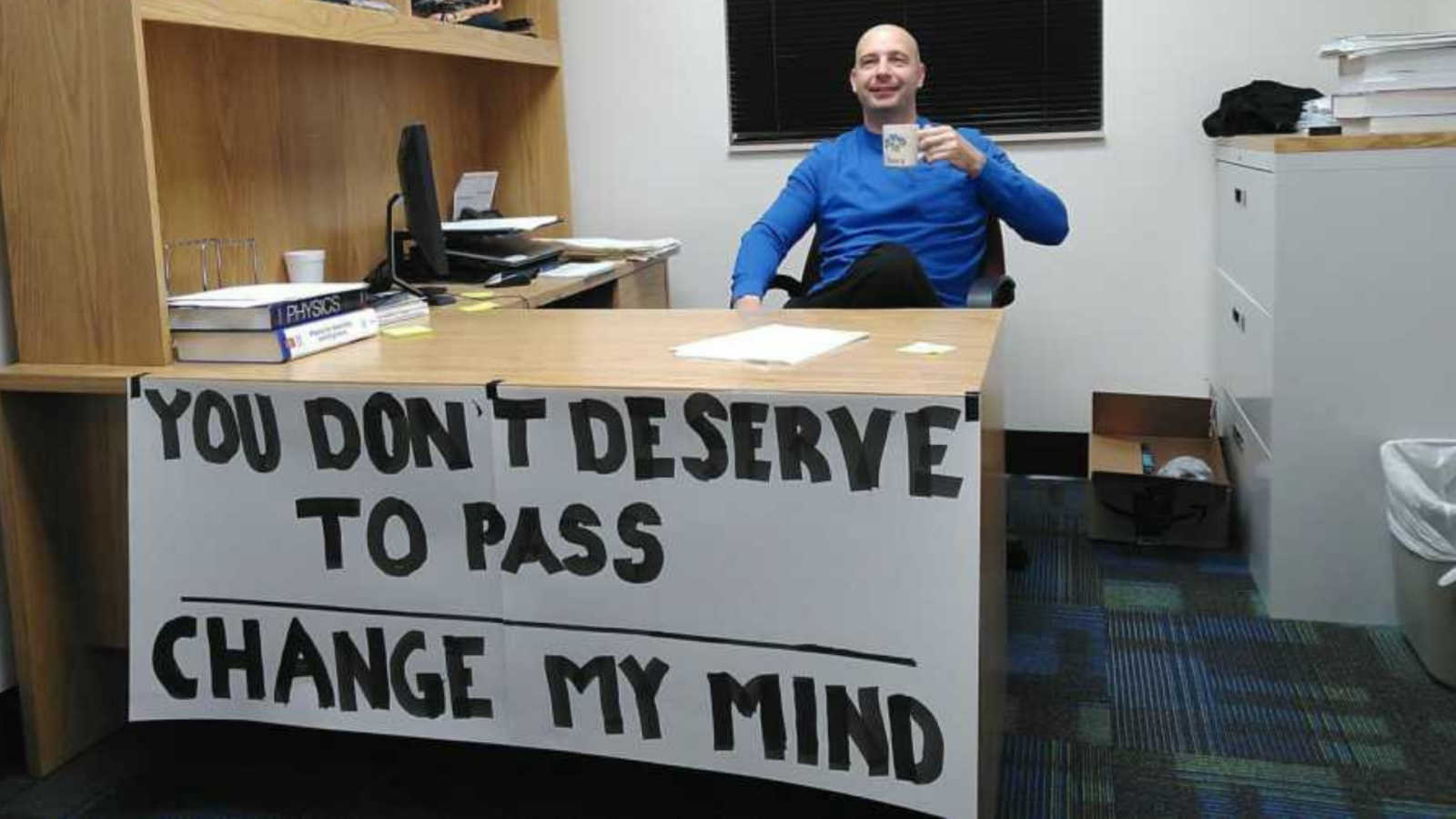 “I am generally very pro-student, or at least I like to think of myself that way. I am basically ‘on their side’ until or unless they do something to change that. Recently I encountered a particular student was a bright kid who did well on the first test and then decided he didn’t need to show up to class because he was smart enough to just pass on his own (that’s not an assumption, he said as much). I posted grades for my students going into the final exam, telling them all what they had in the class and what they need on the final to get an A, B, etc. for the course. That’s when this student found out it wasn’t going as well as he’d thought.

The student showed up for tests (dates were on the syllabus) but didn’t even know that he had failed them because he never came back to get the results. At the last minute, he suddenly wanted to come talk about his grade and what he could do to fix it, a situation that happens far too often… How best to try and communicate to the other young college students of the world that waiting until the end just won’t work . . . ?

So, I had the sign there to communicate to him that he was fighting an uphill battle he had created for himself, but there was a chance he could change my mind. I was all set for my meeting with the student that missed more than 30 classes this semester and emailed me to set up an appointment to talk about his grade.

Teaching introductory physics courses at small universities and state colleges over the last fifteen years, this is a reality that I am very familiar with. Physics courses are dreaded by the large majority of students at all levels. I am convinced that students walking into my courses in fact CAN learn the material so long as their brains stay tuned into what we are doing in class and lab. It is then my job to just keep those brains awake for the hour or so of physics. One of the ways I try to do this is by trying to speak to the students, not at them, as much as I can, and this includes trying to speak their language and express things in ways that are hopefully relatable to them. Social media has changed the way that college students of today communicate and one of their most common ways of expressing themselves is through memes. If a student is lost in a physics lecture and it’s all starting to sound like rapid babble in a language they don’t speak, then a meme or something else familiar is a foothold they can latch onto to lead them back into the conversation. In this case, the sign I created for the student was an example of a meme that I hoped would wake him up.

This is the disappointing part. Unfortunately, he never showed for the meeting. Had he shown up to the meeting, I would’ve listened to him and tried to work something out with him if it was in any way reasonable – maybe an incomplete while we got him caught back up or something like that, but we never got to that point because he, again, failed to show up.

Teachers, like most people generally, are not out to get them and want them to do well. Showing up in life and in school is important. It is impossible to have any version of success without actively putting yourself into what you’re doing and that of course requires that you at least physically show up in the first place. We WANT to work with them. I certainly could’ve just failed this kid without listening, and I was willing to listen.

This story was submitted to Love What Matters by David Red, a Physics professors who resides in Maryland. Submit your story here, and subscribe to our best love stories in our free newsletter here.