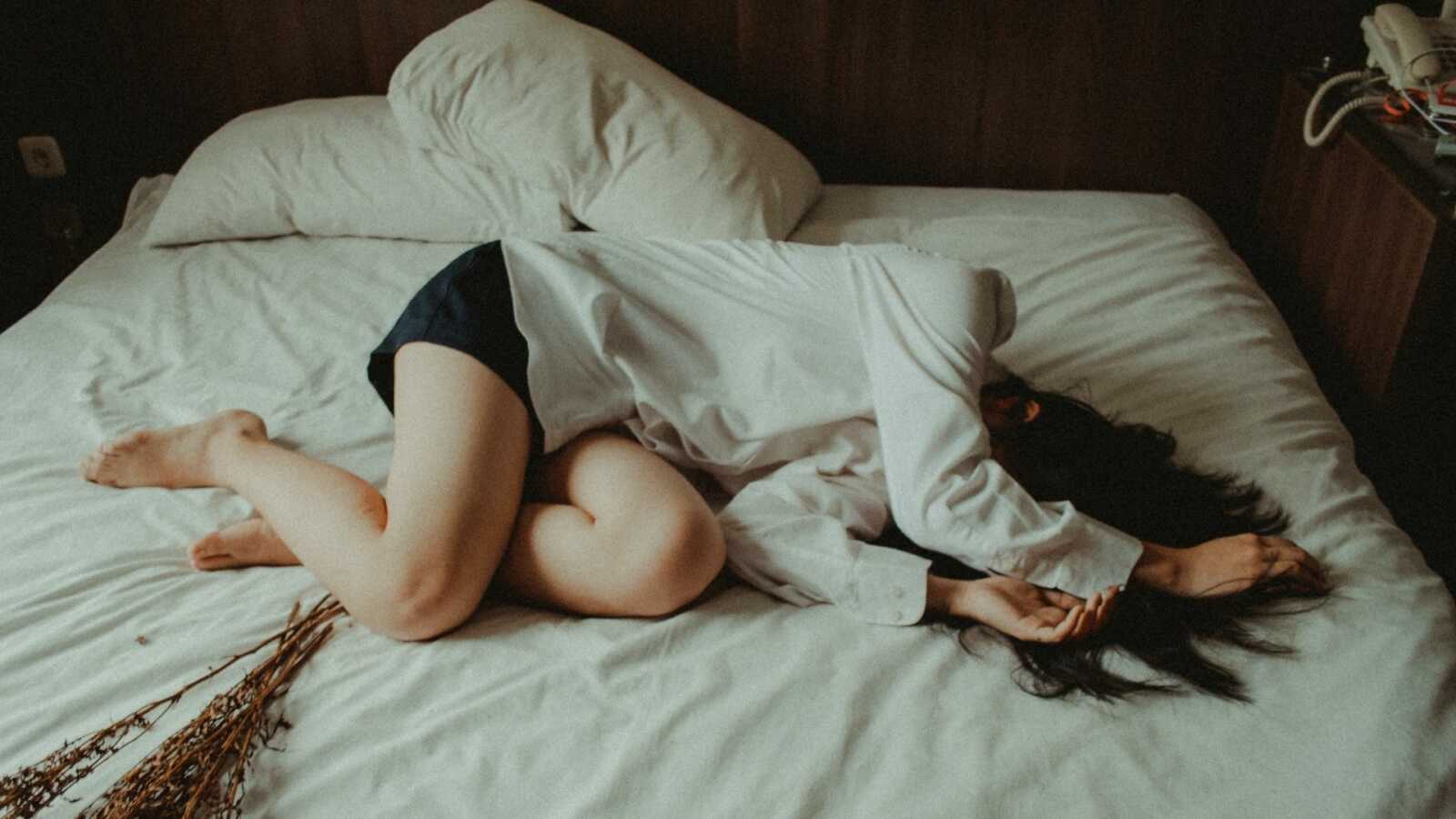 After living with Ulcerative Colitis, an autoimmune condition with no known cause or cure, for almost five years, I’ve heard everything.

“Just be happy it isn’t cancer!”

“You’re so lucky, you can eat whatever you want and still lose weight!”

“If I had to have an autoimmune disease, I’d probably pick Ulcerative Colitis. It’s the best one to have.”

Flying towards me when I was at my sickest, barely weighing 105 pounds and too unwell to stand for even a short five-minute shower, these remarks were never easy to endure. I struggled to comprehend how I was lucky or why someone would want my disease when I’d spent an entire year in excruciating pain, lost many of my friends, had to postpone grad school, was hospitalized multiple times, and had undergone three surgeries amidst the pandemic. I often stumbled over my words in response, unsure of how to bridge the gap between what I was experiencing and the painfully-apparent lack of understanding conveyed by peers, friends, family, and medical professionals.

The aforementioned remarks were a dime a dozen, spoken to me in bright colors of positivity or hushed whispers of pity. Instead of creating encouragement or support, most comments about my condition only increased the isolation I was suffering, making me feel even more alone in what I was going through. Despite the many physical hardships of ulcerative colitis, the lack of understanding, empathy, and care from those around me was just as difficult to maneuver.

Over time, I’ve found that the little, seemingly mundane actions often make the biggest difference. Words have power, and if you know someone with chronic illness, taking time to consider what you’re saying to them about their condition may help them feel more supported and less alone. Here are five remarks I’ve heard over and over again, that are best not to say to someone living with chronic illness:

I can’t tell you how many times a nurse, teacher, or friend has looked at me, eyes steeped in pity, and exclaimed, “You poor, poor thing. But you’re so young!” Despite generally good intentions, this type of comment always evoked frustration and distress, immediately reminding me that young people weren’t ‘supposed’ to be so sick and that I was missing out on all the amazing things other young people were doing, through no fault of my own. The reality is that I was young and desperately sick, and each reminder dumped salt in the open wound.

No good reply existed, and I’d often find myself smiling and nodding, blinking back tears I’d save for later when I was alone. The displays of pity only deepened the self-pity I was constantly feeling, but trying to overcome. Statements that emphasize empathy or compassion, rather than pity, are more emotionally productive when addressing someone’s chronic illness. Pity simply implies someone feeling sorry for you, likely viewing their situation as better than yours, which doesn’t supply the more active support those struggling with chronic illness need.

If there was one thing I was sure of, it was that my situation could be worse. While I knew I was lucky to have medical insurance, family bringing me to appointments, and access to excellent care, the flippant platitude seemed to invalidate the difficulties of what I was experiencing and ask for gratitude at times when it felt wholly impossible.

Most statements starting with “at least” completely disregard the reality experienced by those living with chronic illness. I received comments about my weight almost incessantly, many of them starting with “at least.” At least you can eat whatever you want and not worry about weight! At least you look like a model since you’re so tall and so skinny now! At least you look like a runner! The 20 something girls I knew were hyper-focused on weight, and the more I lost, the more comments I received, from peers and nurses especially. The fact I hated being so skinny and that being so skinny was a fundamental problem for my health and the life I wanted to live seemed irrelevant.

To me, being skinny meant I was constantly shivering and freezing cold, even when wrapped in blankets in the warm summer heat. To me, being skinny meant I was too weak to make the short, ten-minute walk to class, too weak to complete a Target run, and too weak to do the exercises I loved. Implying that I was lucky because my illness had reduced me to nothing but pale skin and sharp bones was disappointing and hurtful. Instead of showing concern or trying to learn how the weight loss was impacting me, comments about my weight slapped a toxic positivity Band-Aid onto a deep and painful injury.

I learned quickly that having a digestive disorder immediately qualified everyone around me to provide advice about what I should (or shouldn’t) be eating. Because the diet is extremely individualized, what works well for some may not work, or may even be harmful, for others. When Western medication continued to fail me, I tried diet after diet but experienced no better luck. As I visited different natural health doctors and dieticians, I was promised multiple times that if I just tried hard enough with my diet, I could heal the inflammation in my colon and save myself from surgery.

Unfortunately, autoimmune diseases are rooted in a faulty immune response and are not curable through diet alone. Though diet alleviates disease symptoms for some, for others it never does. But because the food was marketed to me as something I could control my disease with, I slowly began to internalize blame for the severity of my disease and believe it was my fault for eating the wrong things. People who are severely sick for as long as I was are often desperate and more susceptible to messaging that promises a return to health; it’s the one thing they want the most, and the one thing that has continued to elude them despite all efforts. While diet discussions are not inherently problematic, framing them in a way that blames someone with chronic illness for their illness results in fear when eating, toxic relationships with food, and the destructive belief that they are partially at fault for their disease.

Although I’ve encountered endless insensitive comments, saying something is almost always better than saying nothing at all. Illness conversations are treated with hesitancy and unease, but eventually, illness is something we will all confront, and being able to have those discussions is important. I’ve experienced friends, who, despite awareness of the severity of what I’ve been through, continuously avoid the topic at all costs. Multiple times, when I’ve voluntarily brought up my health, the people I’m with instantly change the subject. And just as many times, friends have texted other friends or family has texted my parents to see how I’m doing, instead of reaching out directly to me.

Chronic illness can be all-encompassing, and most aspects of life are affected. Tiptoeing around the subject shows a lack of care for the person suffering. While at times someone you know living with chronic illness may not want to talk about their condition, there are times when talking about it feels necessary, and avoiding the topic because it seems uncomfortable or you don’t know exactly what to say is not only selfish but hurtful. Asking questions when you don’t know what to say, or simply admitting you don’t know what to say but are there to help are the kinds of simple, seemingly mundane actions that do more for someone struggling than most anything else.

This story was submitted to Love What Matters by Jasmine B. You can follow her journey on Instagram or email her here to connect: jpouchjasmine@gmail.com. Submit your own story here, and be sure to subscribe to our free email newsletter for our best stories, and YouTube for our best videos.

‘Every morning I trudged, syringe in hand, to get stabbed in the abdomen on an exam table while my classmates grabbed Starbucks. I began silently screaming, ‘Why me?’: 19-year old diagnosed with IBD, ulcerative colitis advocates for change

‘The doctor said, ‘It’s just teenage girl stuff.’ I was living with everyday pain as if it were normal, forced to accept feeling this way forever.’: Young woman shares journey to Ulcerative Colitis diagnosis, ‘My life is just beginning’

‘I looked at the poop bag and cried. ‘I’d rather die.’ I didn’t want my partner to stop loving me.’: Woman with ulcerative colitis advocates for stomas, ‘Every body is worthy’

Provide hope for someone struggling. SHARE this story on Facebook with family and friends to let others know a community of support is available.