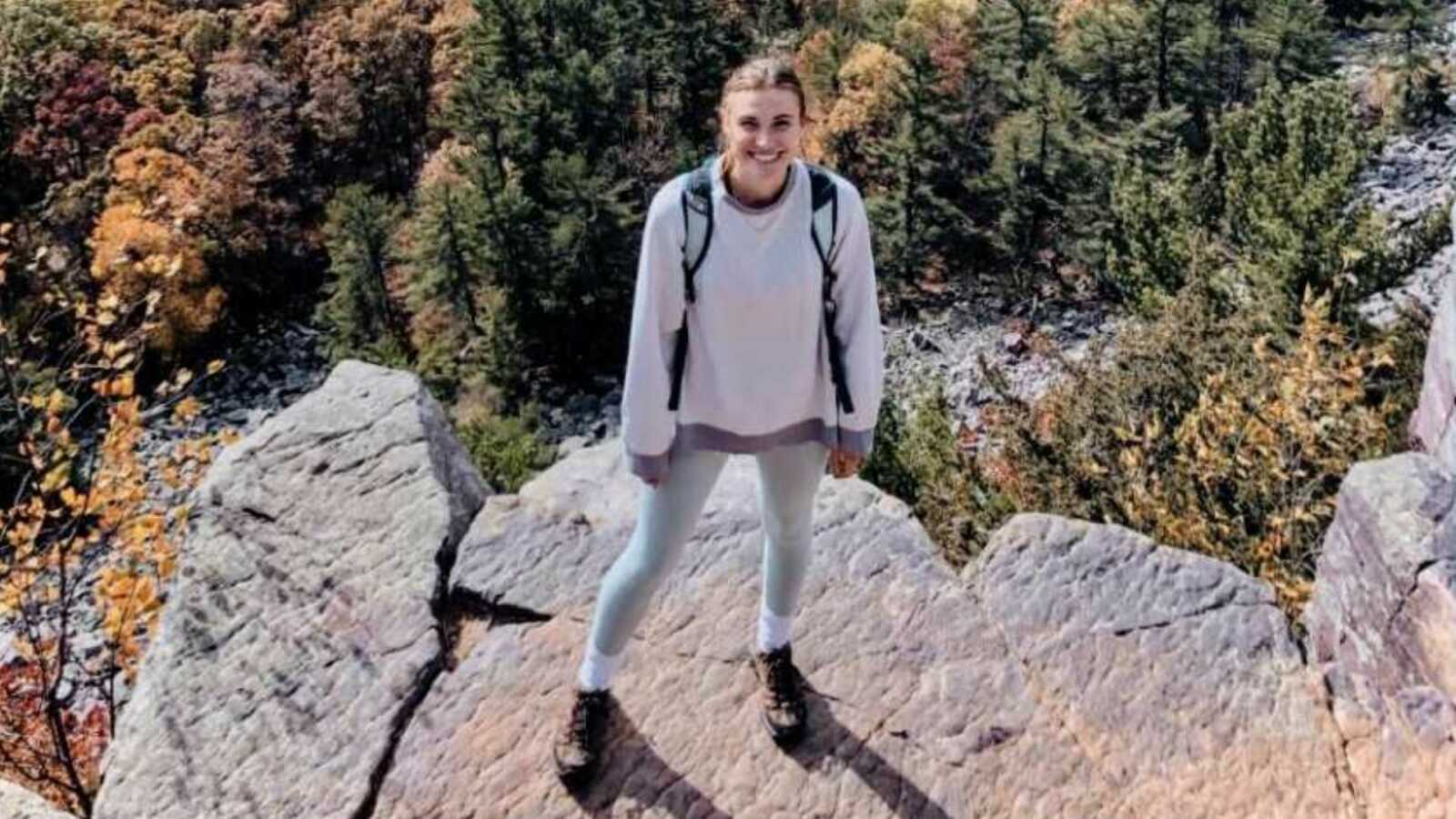 “In the past four years, ulcerative colitis has turned my bedside table into a menagerie of pill bottles, and my phone’s call log into a long list of nurses’ lines. It has also put me through eight medications, many with life-threatening and lifelong side effects. It has required more hours in doctors’ offices than in classrooms and, coupled with COVID, over a month hospitalized alone, no visitors allowed.

Ulcerative colitis has dropped a second autoimmune condition on my shoulders, along with a wide range of extraintestinal manifestations including blood clots, severe weight loss, chronic low platelets, and debilitating fatigue. It has made me someone who, at 23, better understands after-visit summaries, TNF inhibitors, and total parenteral nutrition than TikTok or Hinge. Reducing my senior year of college to nothing more than ‘sick,’ ulcerative colitis has stolen a full year of my life, putting me through more physical and emotional pain than I’d ever imagined possible. In the end, ulcerative colitis cost me my entire large intestine, requiring three major abdominal surgeries in nine short months, placing my plans for law school and the future on hold.

But despite all the procedures, the frustration with insurance, the indifferent doctors, the physical suffering, the missed classes for infusions, the disgusting supplements, the ridiculous diets, and the emotionally arduous transformation from ’19-year-old-Jasmine-who’d-never-been-sick-before’ to ’19-year-old-Jasmine-who-is-sick-forever,’ the most difficult aspect of being chronically ill at such a young age, especially in the college environment, has been the extreme lack of support from friends, peers, and the people around me.

For me, the hardest part about chronic illness has been that the friends from childhood and high school, who I didn’t talk to as often, but who always promised to ‘have my back’ during tough times, were nowhere to be found. While those friends checked in when my ulcerative colitis began flaring in July of 2019, by May 2020, when I was being wheeled into the OR, they hadn’t texted, called, or Facetimed in months.

For me, the hardest part about chronic illness has been spending night after night alone and sick in bed at college, while my friends were out at the bars almost five nights a week, trying to ‘make the most of senior year!’ It was being immersed in the university environment, where many classmates took their health for granted, seemingly abusing the underappreciated, yet invaluable privilege with nights of 10+ shots and 2:00 a.m. greasy pizza. It was not understanding why I was being denied the good health all the other 20-year-olds around me got to enjoy, despite doing everything in my power to be healthy.

For me, the hardest part about chronic illness has been seeing the pictures of my friend group at the senior year football games, on the fall and spring break trips, at parties and dances and dinners. Even though I should’ve been there, I wasn’t at any of the events or in any of the photos because I was so unwell. My empty space in the photographs was an open wound; I’d often cry scrolling through Instagram, feeling left out and forgotten, wondering when things would change, when I’d get better when I’d be allowed to do the things I so desperately wanted to.

As my illness progressed, the friends I spent my first three years of college studying, traveling, partying, playing sports, and living with disappeared. My need for support increased, but the amount I received subsequently decreased. Instead of offering to do activities I could participate in, over our senior year, my friend group instead simply stopped including me in plans. Despite knowing I was too sick to participate anyways, this conscious choice to stop inviting me felt like the worst kind of targeted abandonment, on top of everything else I believed I’d already lost.

When COVID hit in March 2020, I was at my most sick, and my medical team ordered me to finish the final months of senior year at home. My friends remained together at school, and the physical distance only solidified the space that had been growing all year. As I began the three-step surgical process, spent two months on TPN, and adjusted to life with an ostomy bag, there was almost no contact between me and the girls I’d spent the last three years of my life with.

After surgery, I slowly gained back my health and strength, which freed me to begin processing the way others had treated me while unwell. When I was so sick and in so much pain, I couldn’t defer any mental energy to the psychological. I was too consumed in the physical, in trying to make it through each minute of each hour of each day. And at first, I questioned myself, wondering if I deserved the lack of support because I was so tied up in my own situation that I wasn’t able to be a ‘good friend’ during our senior year.

But the lack of support continued through the rest of 2020, and into 2021. I was finally healthy enough to participate in activities, and I wanted nothing more than to make up for all the times I’d missed out, but my friends went on multiple trips during COVID and never invited me or offered to take any precautions to make the trips safe for me to come. Over and over again, my friends and the people around me refused to get tested, refused to quarantine, or refused to not go to the bars so I could feel comfortable seeing others. Despite going through so much to regain a sense of health and normality, I felt like I was in the same position I’d been when I was ill: sitting on the sidelines and watching everyone else live life.

I once thought talking about how I felt and understanding my friends’ behavior would provide closure/emotional healing, and in some cases it did, but for the most part, I was left feeling hurt and shocked by a far deeper absence of empathy than anticipated. I’ve read time and again that one of the reasons people are grateful for their illness is because it’s shown them who their true friends are. But what do you do when your illness proves you had almost no true friends?

Over the past four years, I’ve learned that people, especially young people, don’t like or don’t know how to talk about illness. Most seem to find conversations about illness uncomfortable or scary, and chronic illness remains badly understood in the public conscience. The lack of support I’ve experienced hasn’t just come from friends, but from doctors, the healthcare system, and my universities. Yet, illness is something we will all eventually face, whether it’s our own or a loved one’s. We need to be able to talk about these topics, integrate them into our understanding of the world, and better support the people actively dealing with them. In sharing my story, I only hope that others facing illness or experiencing similar isolation feel less alone and that the next time someone has a friend or family member struggling with illness, they are better equipped to provide empathy and support.”

This story was submitted to Love What Matters by Jasmine B. You can follow her journey on Instagram or email her here to connect: jpouchjasmine@gmail.com. Submit your own story here, and be sure to subscribe to our free email newsletter for our best stories, and YouTube for our best videos.

‘Every morning I trudged, syringe in hand, to get stabbed in the abdomen on an exam table while my classmates grabbed Starbucks. I began silently screaming, ‘Why me?’: 19-year old diagnosed with IBD, ulcerative colitis advocates for change

‘He confirmed I was disgusting and worthless. He instilled in my mind there was better out there.’: Woman battles Ulcerative Colitis, finds love after infidelity

‘The doctor said, ‘It’s just teenage girl stuff.’ I was living with everyday pain as if it were normal, forced to accept feeling this way forever.’: Young woman shares journey to Ulcerative Colitis diagnosis, ‘My life is just beginning’

‘I looked at the poop bag and cried. ‘I’d rather die.’ I didn’t want my partner to stop loving me.’: Woman with ulcerative colitis advocates for stomas, ‘Every body is worthy’

Provide hope for someone struggling. SHARE this story on Facebook with family and friends to let others know a community of support is available.