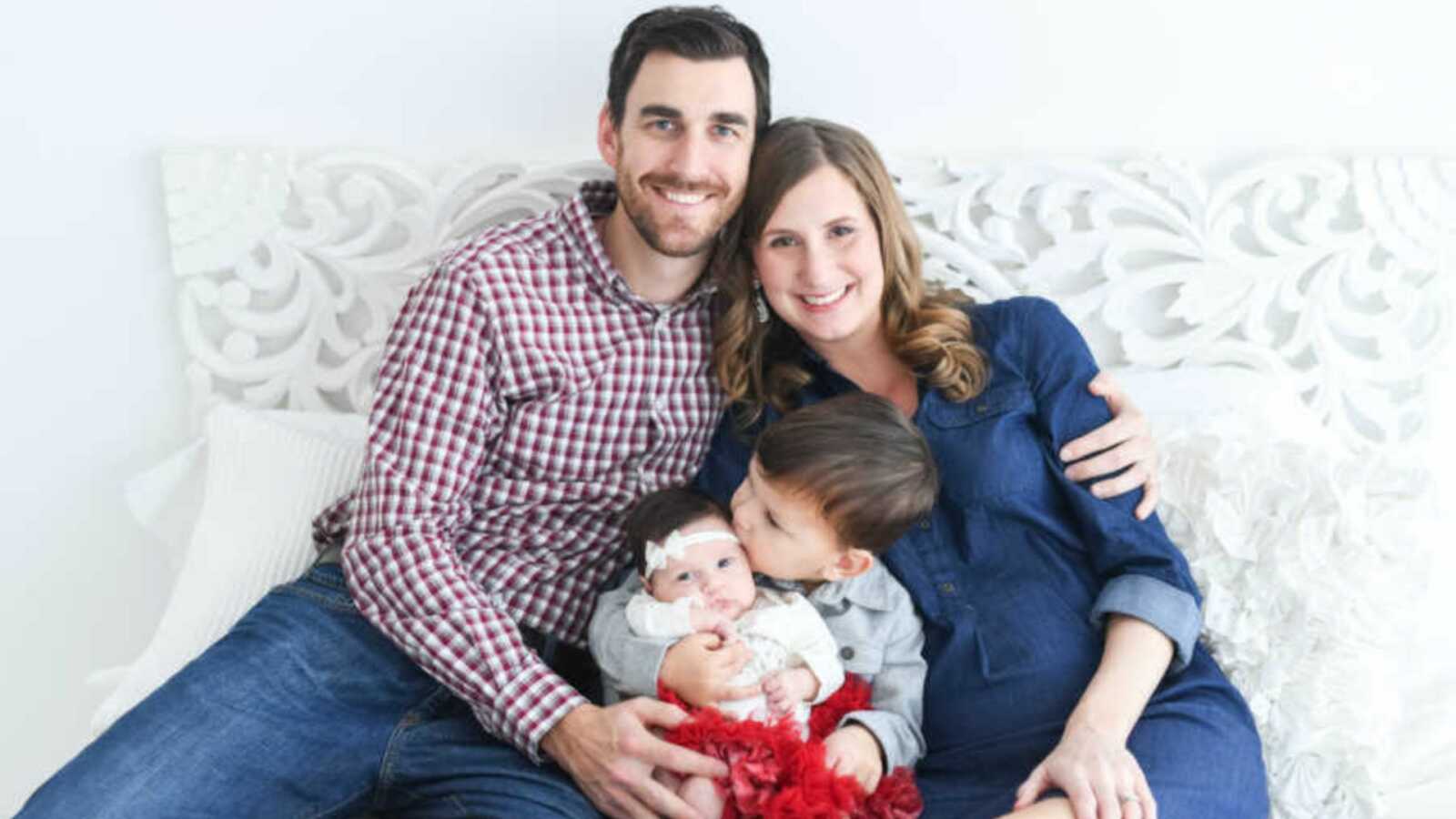 “I died after delivering my daughter in September 2016. I crashed and coded in the post-op room after my C-section and was given CPR for 10 minutes, by 6 different people, until they brought me back to life. I was placed on 3 life support devices – a ventilator, an impella, and ECMO.

An impella is a propeller-like device placed in the heart to pump the blood when the heart stops beating. ECMO is a machine that takes all of the blood out of the body, oxygenates and cleans it, and then moves it back into the body, again taking the place of the heart.

I was flatlined for about 36 hours because these machines were doing all the work of my heart and lungs.

I joke now that my summer anthem is ‘Flatliner’ by Cole Swindell. I fought with all of my heart (literally) to get back to my high-school sweetheart husband, and our babies. My heart slowly began to beat on its own after a week or so. I was able to re-meet my daughter when she was 2 weeks old.

I remember nothing about the delivery or even 2 weeks before she was born due to retrograde amnesia.

I survived Peripartum Cardiomyopathy (PPCM). This is a silent killer that is taking far too many new moms away from their newborns and families.

I was 30 years old and pregnant with my second baby who was due October 2016.  All seemed normal except for the last few weeks before my daughter, Amelia, was born, when my blood pressure began to rise.

In the month of September, there were a couple occasions where I was admitted to Mercy hospital as an outpatient to monitor my pressure. Bed rest and blood pressure medication didn’t work.

At 37 weeks, I went to Mercy due to high blood pressure and thus the decision made to begin an induction.  We were probably a good 12 hours into the induction when Amelia turned breech. Since this was now a breech birth, a C-section was scheduled.

The C-section went without complications. Amelia was born on September 29th. Kevin, my husband, Amelia, and I went to the recovery room.

The staff urged Kevin to leave the room with Amelia because my heart-rate was skyrocketing, my oxygen was plummeting, and the room quickly filled with doctors and nurses. Shortly after arriving in the recovery room, I was taken to the ICU. I had a rapid heart-rate, low oxygen levels, fluid on my lungs, and unstable blood pressure.

Within a very short time, arrhythmias in my heart developed and I was paddled several times to get back in rhythm. Cardiologists in the Mercy system were called emergently.

Kevin, my mom, and my mother-in-law were told that my heart was failing. It was one of the worst cases this cardiologist had seen, and I needed to be in the cardiac cath lab immediately.

In the cardiac cath lab, my heart stopped beating and I coded several times. A 6-person team began CPR for a duration of about 10 minutes. The cardiologist was able to place an impella in my heart to pump the blood for me since my heart wasn’t beating on its own.

The impella bought me some time to get me transferred to another hospital in St. Louis, Barnes. My family was told that the best chance of survival was to get to Barnes and get on an ECMO machine. It was about 3 hours before Mercy got me stabilized enough to be transferred to Barnes.

I arrived at Barnes on September 30th and was admitted to CV ICU (Cardio thoracic /Heart chest ICU). I was placed on the ECMO. At this point, I was on a ventilator, I was in heart failure, my liver was failing, my kidneys were failing.

After listing all of the complications and harsh realities, my mother-in-law asked my cardiac surgeon, Dr. Itoh, ‘What went right?’ He paused for a moment and said three things went right.

When I was transferred to Barnes, my family was faced with the harsh reality of the doctor’s words. My heart was not beating. I was completely flatlined on the monitor for about 36 hours because the impella, ventilator, and ECMO were working as my heart and lungs.

My husband was attempting to process the doctor’s words: that he was going to lose his high school sweetheart the day his daughter was born.

After a few days, my heart began to beat on its own again. It was just a blip here and there on the monitor, but it was enough to give my family hope. Miraculously, those blips became stronger and stronger and I began to breathe on my own again.

My ventilator came out October 8th.  On October 9th, I was celebrating our 6th wedding anniversary by sitting up in a chair and having my husband feed me ice chips one by one all night.

When my daughter was 2 weeks old, I was able to meet her for the first time since delivery. I was under sedation for so long that I had retrograde amnesia, meaning that I have memory loss even before the traumatic event. I estimate that I lost about 3-4 weeks of memories, some of which are the birth of my daughter, something that shouldn’t be erased from any mother’s memory.

I was also able to see my 2-year-old son for the first time since going into the hospital, who was having a really difficult time without his mommy. One day he asked my mother-in-law, ‘What happened to Mommy?’ in a very stern and concerned voice.

The day I was able to see my children and have my whole family together was one of the best days of my life.

I left ICU on October 18th and went to the cardiac step-down unit. I received OT and PT. As a speech pathologist myself, it was very strange being on the receiving end of therapies.

On October 19th, I was standing and learning how to walk again. After three weeks in the hospital, I was finally able to return home with my family.

When I got home, I still felt miserable. My blood pressure was out of control, even with my 10+ pills per day. One night it got up to 195/115. My heart rate was really high. Even at rest it was over 100 bpm.

I couldn’t walk around my house without stopping to rest. I was so discouraged I was going to be this sick for the rest of my life. In November, Dr. Lindley, my peripartum cardiologist, detected the presence of a paraganglioma, a tumor next to my adrenal gland.

I had surgery on December 7th to remove the tumor. To say I was terrified is an understatement. I knew the procedure was risky and I didn’t want to die… again.

Seven days of recovery later, I felt completely like myself again. I could pick up my son. I could care for my daughter. I had my life back! That tumor was the cause of my peripartum cardiomyopathy. Removing the tumor solved all my problems.

I returned to work full-time on February 1st.  My maternity leave was extended just 4 weeks longer than I originally planned. My heart rate stabilized to normal numbers and my stamina has returned. I was truly given my life back.

I want to share my story to educate people about PPCM.  The United States has one of the highest maternal mortality rates, even when compared to underdeveloped countries.

I never thought I could lose my life during childbirth in America in 2016. More pregnant women as well as health care professionals need to know the signs and symptoms of PPCM as well as how it can be treated.

If I can save just one mother from being taken away from her baby by PPCM, I know I will have succeeded in my goal.”

‘My doctor wrote off my symptoms as ‘being pregnant.’ I felt them cut me open.’: New mom urges awareness of PPCM