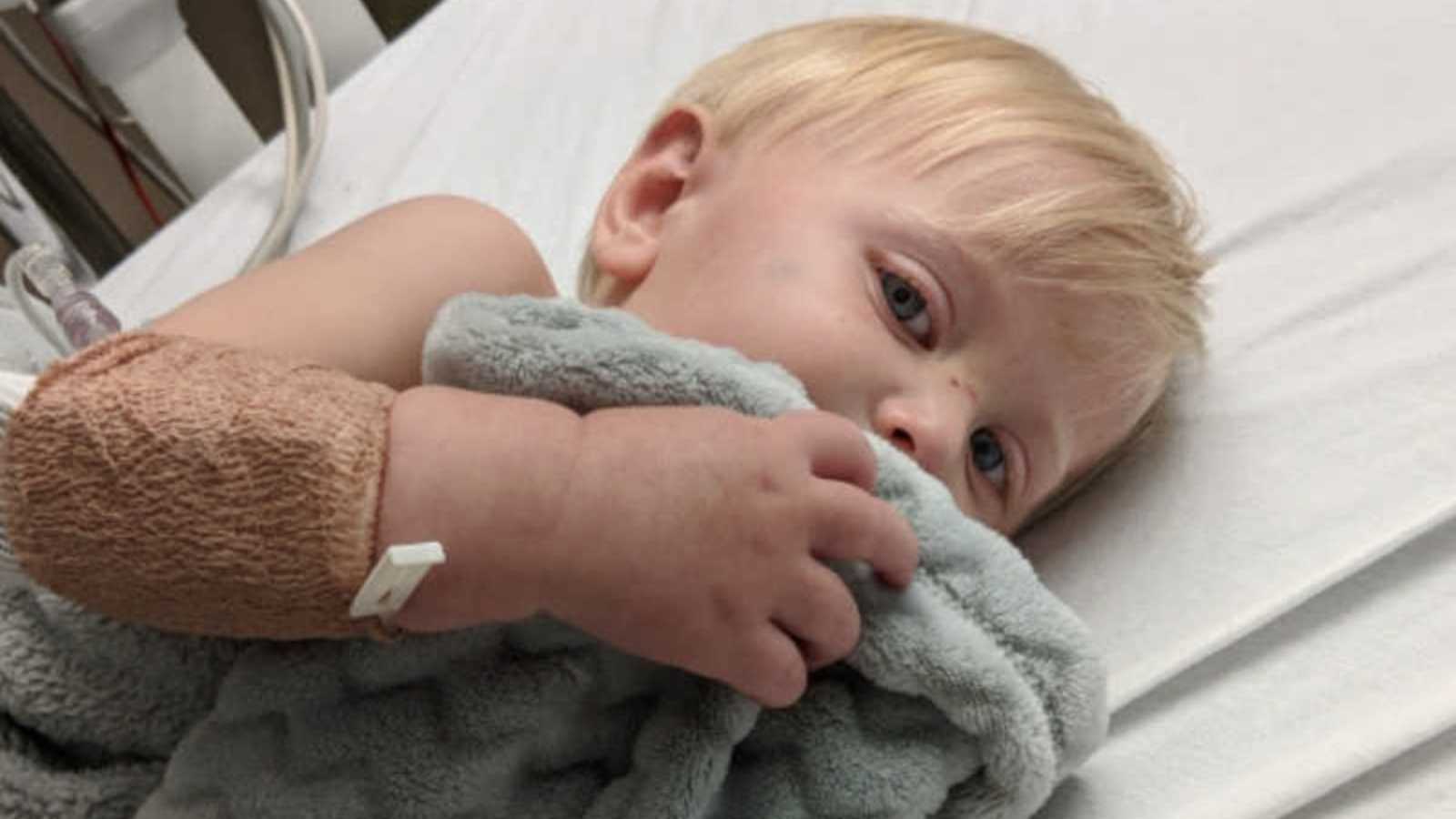 “I had Luke in September of 2016. He started at a public daycare in November of 2016. The teacher that kept him, we will call her Shelia, decided she was going to quit the daycare and open an in-home daycare. Luke loved her and we had begun hanging out and she seemed like a decent human being so I agreed. That was in July of 2017. Everything was going great. Luke seemed to enjoy his time with her. It got to a point where we were friends and our families would spend time together. Her husband, we will call him Richard, enjoyed hanging out with my husband and our kids got along. All was great until Richard got 3 weeks off of his construction job in December. The first week he was off, he called me and told me Luke had fallen off the couch. That happens so I thought ‘no big deal.’

The following week, the week before Christmas, Richard calls to tell me Luke was standing on a Bumbo chair and another child pushed him down and he scratched his face up pretty good. I was pretty frustrated but again thought kids will be kids. On both occasions Shelia had left to run a ‘quick’ errand.

On December 28, 2017, I was supposed to go to lunch with a friend and they cancelled. I had already driven towards their house so I thought I would pop in and check on Luke and give him some love before returning to work. My child is a happy child and he lights up when he sees me, as most children do with their mothers. I got there and he was asleep on the couch. I tried waking him up and he would barely open his eyes. I picked him up because I knew something was wrong. When I began examining his head I noticed it was extremely swollen. I asked Richard what happened because once again Shelia was not there. He said that while him and Shelia were in the other room Luke fell off of a rocking chair and he must have hit the corner or something. He said Luke was acting fine afterwards so he didn’t call me. I still couldn’t get Luke to stay awake so I stopped asking questions and loaded him up and tried not to overreact.

I called the pediatrician to see if she could look at him but she wouldn’t be in the office until 3pm. I thought NOPE I am not waiting. I called my husband and told him I was taking him to the hospital. I called my boss and told him I wouldn’t be in for the rest of the day. I went 90 MPH to the hospital and ran Luke into the ER. They immediately got us back and I explained what happened the way it was explained to me. They said that because it was a head injury they wanted to go ahead and get a CT. We sat in the waiting room for maybe 15 minutes and got a CT then they gave us a bed in the ER. The ER doctor came up to us and asked me again what happened. I explained to him what I was told and he told me he suspected this was child abuse and would be contacting CPS.

At this point, I really couldn’t believe it. These people were our ‘friends’ and they have children of their own. I thought these people just see the worst of it everyday so that is why he went there. When the results of the CT came back and said he had a skull fracture from his right temple to behind his right ear I realized maybe the ER doctor was correct. Scratch that, it took several doctors telling me he was abused to actually believe it. I just couldn’t wrap my head around someone wanting to hurt my son. They then took blood and x-rays. I called my husband and he left work and joined us at the hospital. I was doing my best to remain calm because the last thing Luke needed was for his mother to be hysterical. We were admitted because they wanted to observe and make sure Luke was eating and drinking; also that there was no brain bleed. A 1-year-old with a skull fracture and possible brain bleed. They kept saying it. When we finally got admitted to PICU we met with 2 different neurosurgeon’s that agreed with the ER doctor’s assessment.

We also met with 4 investigators that asked us what happened. We had my husbands parents and my best friend up there for support. My husband ran home to change clothes and get us a few things. The hospital provided a courtesy room so we could sleep. My husband told me I should use it to try and get some rest and that he would stay with Luke. The next day my dad and stepmom drove in and spent some time with us and Luke. They stayed in a hotel that night. We were released after 48 hours.

Then the investigation started. We went and gave our statements to the investigator and provided a complete medical history to verify we had not been hurting our child. Because when someone hurts your child they initially suspect the parents, it felt sh*tty. The investigator asked us to remain as normal as possible with them so they wouldn’t suspect that a case was being built against them. We called his old daycare and I explained the situation to the director and she made room for Luke. I fired Shelia and told her Luke would be starting Pre-K soon and it would be better for him. I went over there to pick up Luke’s things and (like an idiot) brought Luke with me. He acted fine while we were there until Richard arrived then he clung to me like his life depended on it. I felt like the worst mother on the planet in that moment in time. Richard and Shelia gave their statements. At this point Richard told the investigator that in the first instance where Luke fell off the couch he accidentally pushed him off the couch. The investigator asked Richard to return to do a lie detector test and he originally agreed. The day before the test he called and said he had hired a lawyer and he was advised against it. The investigator worked on the case and turned it over to the DA. They arrested him on February 21st. Richard was charged with 2 counts of Cruelty to a Juvenile for the first 2 instances. And 1 count of 2nd degree Cruelty to a Juvenile for the skull fracture. He spent a total of 5 days in jail and they gave him a court date where he would enter his plea. The court date kept being pushed back until December 10, 2018. Almost a year later. He took a plea deal and is now a convicted felon.

The hardest part of dealing with all of this is that I don’t have anyone to talk to about it because no one says anything helpful. Here are some examples of what has been said: ‘I would kill/hurt him.’ My response to that is no you wouldn’t. You say that you would because that is your emotional response. Once logic kicks in you wouldn’t because being in prison does not help my child. Another one was ‘I just can’t believe he would do that he is so good with his kids.’ I asked if they would like to see a copy of the CT or speak to one of the doctors who said otherwise. Another is ‘That will teach you that you can’t trust anyone.’ I had to immediately eject myself from that situation because as much as I know that it isn’t my fault I will always feel guilty about not knowing sooner.

What ends up happening every time I talk about it is people focus on how they would feel in that situation. I understand you are trying to show me empathy but I really don’t want to hear your process because you say some hurtful things. I do my best not to react in front of Luke because he gets upset when I’m upset and he had been through enough so I told myself if I needed to be an emotional mess then you carry it to the bathroom. It has been incredibly difficult. I am grateful for the fact that Luke is so young and it is not something he will remember. I am grateful for the strong group of friends and family we have supporting us. Lastly and most importantly, I am extremely grateful that there was no permanent damage and that he lived.”

This story was submitted to Love What Matters by Melanie Harris. Submit your story here. Subscribe to our free email newsletter here.

‘He asked me if he could murder the baby now. His father had been alone with him for 2 hours and everything had been fine.’