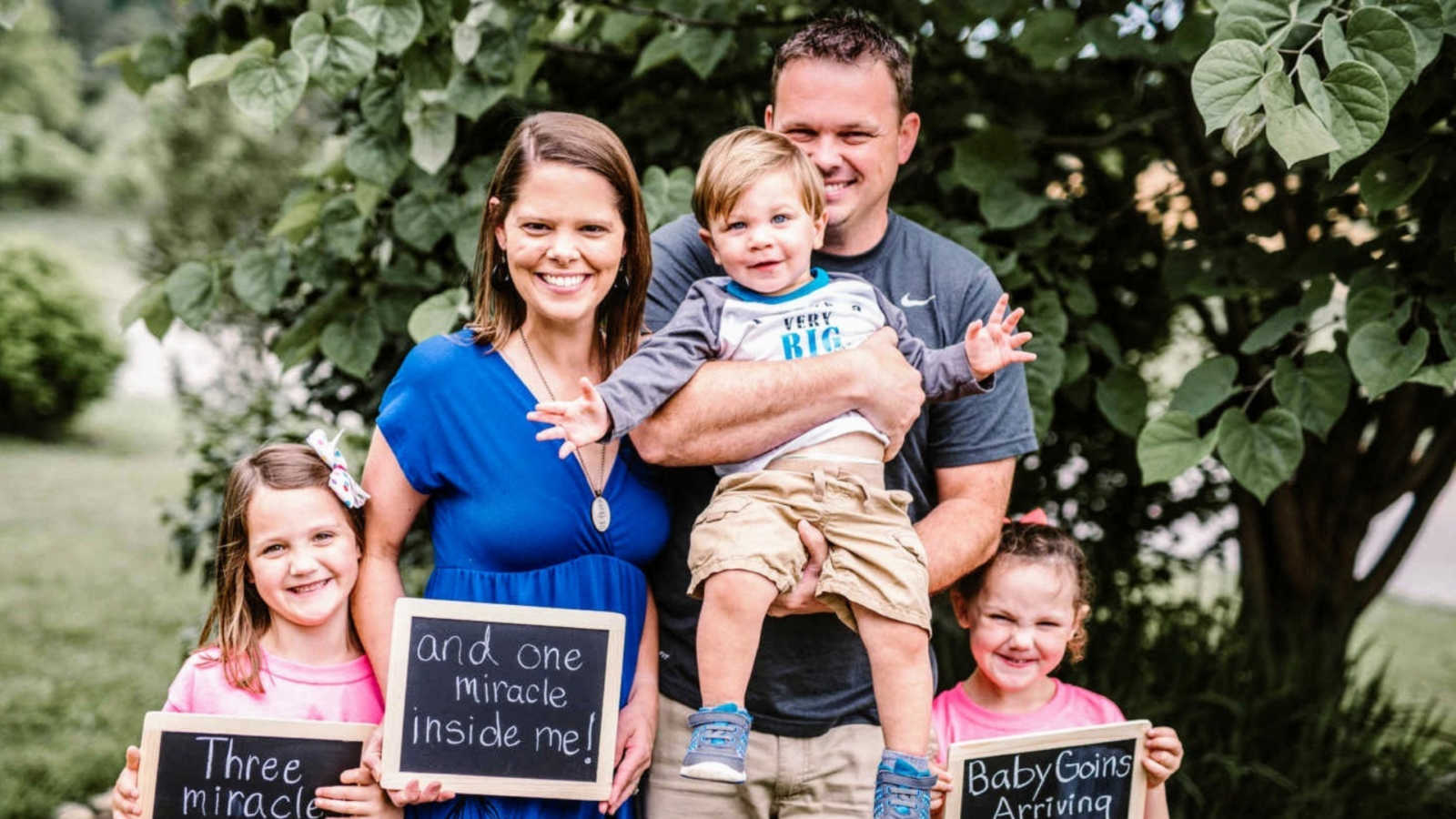 “I know there is someone who may be where I was just a few short years ago who needs to hear my amazing story of hope. My husband Allen and I started trying to conceive in June of 2008. After months of nothing, we started testing and looking at fertility stuff. After 10 failed IUI’s, multiple rounds of clomid and shots, plus 2 surgeries and over 3 1/2 years, we were tired, broke, and hopeless. I can remember sitting in Sunday school holding my breath during prayer requests because I knew someone else was going to announce a pregnancy. I had to stop going to baby showers. I held back tears when people asked innocently, why we hadn’t had kids yet? Doubts crept in. ‘Was this because of some unconfessed sin in my life? Did God really not want me to be a mother? Why was it so easy for everybody else to get pregnant? When would it happen?’ I got to the point where I didn’t even buy pregnancy tests anymore because it was always negative. Although I appreciated everyone’s advice, I was tired of hearing, ‘just stop thinking about it’ and ‘It’ll happen when you least expect it.’ I just wanted to be pregnant and no words were going to change that.

We began to look into adoption in the summer of 2011. We began the adoption paperwork through an agency and 1 day after we were officially ‘on file.’ My father in law called us with news of a family friend whose daughter was pregnant and was looking to place her child for adoption. 2 short months later, we welcomed a baby girl, Delaney Jane, into our family!

The adoption was final 10 months later in Dec of 2012. The next month, we found out, the birth mother had given birth to another baby girl! At that time the grandparents were helping raise her, but they contacted us 6 months later and asked if we would be interested in adopting this baby as well. Of course, this child being the full biological sister of our other daughter, we were ecstatic. The process took a while, but in June of 2014, our sweet Kylea Elizabeth officially became ours.

At this point, we felt our family was complete. Two beautiful baby girls given to us by God. During this time, I never got back on birth control, nor did we think pregnancy was a chance since numerous doctors told us we would not conceive without help. Fast forward a few years later, and we were contacted again by the maternal grandparents. The same birth mother was pregnant again, this time with a little boy. Our hearts yearned for this child to be with us as well. After a bit of court proceedings, we were able to gain custody of this precious boy in December of 2016. Little did we know this would be a 16 month long process of court dates and ups and downs. In April of 2018, Brooks Allen Goins’s adoption was final.

Allen had mentioned to me on a few occasions that maybe we should schedule a vasectomy for him. I remember laughing – I’m 36, I’ve been off birth control 10 years, we’ve never even had 1 positive pregnancy test! God has blessed us 3 times with children through adoption. What are the chances I’d ever be pregnant? Fast forward 1 month later. After feeling bad (nauseous, very tired, vomiting) for a week, I made a doctor’s appointment to see what might be going on. My money was on a stomach bug, E. coli or a vitamin deficiency. My husband later told me he ‘just had a feeling.’ I went to the doctor by myself just to ‘rule out pregnancy.’ The nurse asked me if I could be pregnant. Well technically, yes, I could, but I told her our story and my chances of conceiving without help and she said, ‘Let’s do a urine test just to check and go from there.’

While waiting in the room alone, my mind started to wander. ‘What if I was pregnant? Could that even be possible? Would God give us a miracle baby after all these years? Could we afford 4 kids? Did I even want to wish this because of all the hurt and disappointment years of infertility had brought us?!’ A few moments later the doctor walked in. She didn’t have any telling expression on her face and I went ahead and prepared myself that she was going to say the test was negative. She proceeded to ask me what symptoms I had experienced and if we had been doing anything to prevent pregnancy. I then told her about our 3rd adoption being final just the month before and that my husband had joked maybe he should go get a vasectomy! At that point she looked up from her computer and said, ‘Well, it’s too late. You’re already pregnant.’ That moment will stay with me forever. The years and years of crying every month over another negative test, money thrown into another procedure that didn’t work, watching literally everyone I know get pregnant and the one thing I yearned for, still not happening. All of those things were worth it, to hear that I was carrying a child inside of me.

Because you see, God had already answered my prayer to be a mother, 3 times! I was a mother, and no doubt I love all 3 as if I’d carried them inside me. But God never did take away my desire to be pregnant. To feel a child inside me kick and squirm. To have morning sickness, cravings, blood drawn, ultrasounds to see the little one moving inside me and to bring a life into this world. I prayed for Him to take it from me if it wasn’t in His will. And after 3 kids, I truly thought I wouldn’t experience it and I was truly at peace about it. So to walk out of that office that day knowing He still knew the desires of my heart, nearly brought me to my knees. The next few weeks were a whirlwind of OB appointments and telling friends and family! How do you wait to tell the ones you love about what God has done after all these years? I’ll never forget going to the first OB appointment a few days later and hopping up on that table to do an ultrasound. The only ultrasound I had ever had before was to check the growth of my follicles after taking clomid. I remember wishing all those years ago for the day I would proudly walk out of that office with a picture of my baby, not follicles! As I lay on the table waiting for the tech to start the ultrasound, I was nervous but so excited.

When she rubbed the wand on my stomach and then turned up the sound, Allen and I smiled at each other and high-fived as we heard our daughters heartbeat for the first time. Outside the room, our OB, nurse practitioner and other staff who knew our story and were patiently waiting, erupted into shouts and clapping! What a special moment! After estimating my due date based on my last period, they gave us a projected conception date, April 6. Brooks’s adoption was final on April 5. God’s plan was so perfect that HE didn’t wait weeks or months or even years after the finalization of our last adoption, HE literally closed the chapter on that part of our story and turned the page to a new chapter the very NEXT day! From that point, the story just gets more glorious. At 10 weeks we found out we were expecting a baby girl, all tests, the anatomy scan, glucose, etc. were perfect. I was a 37-year-old with a perfectly healthy first pregnancy! And 3 kids at home, ha.

On December 20, I was induced at 39 weeks. The doctor broke my water around 6 a.m., I labored most of the day, then I pushed for a little over 2 hours. At 8:07 p.m. the most beautiful baby girl came into this world weighing 7 pounds, 13 oz and 20 1/2 inches long. A baby girl prayed for by so many for over a decade. Caroline Rose. Our precious surprise and miracle from God.

It is still such a miracle to me that God allowed me to carry a child within my body for 9 months even after blessing me with 3 beautiful babies through adoption.”

This story was submitted to Love What Matters by Beth Goins. Submit your story here. For our best love stories, subscribe to our free email newsletter.

‘If this turns positive, it is freaking baby Jesus,’ I said to my husband as I finished peeing on a pregnancy test. He was holding our newborn baby girl we just brought home through adoption.’