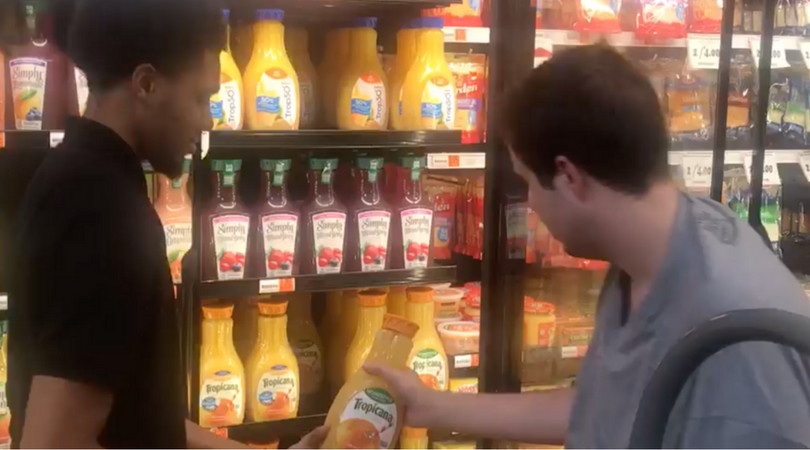 “I have two siblings with autism, Chase and Jack Ryan. Jack Ryan is 17 and struggles with communication and appropriate social interactions due to his diagnosis. His speech is limited, but the smile on his face while he was working with Jordan spoke all of the words he couldn’t say!

My dad took Jack to Rouse’s yesterday and apparently he was interested in stocking the shelves. We all know autism makes going out difficult, and sometimes grocery stores can be a challenge. My dad and Jack Ryan were walking around when Jack showed an interest in what an employee was doing. Instead of ignoring him or making an excuse as to why he couldn’t help, Joradan  allowed Jack Ryan to be a part of it and didn’t stop until Jack was satisfied. This young man, Jordan, took the time to slow down and allow Jack Ryan to help for over 30 minutes, guiding him as he finished his task. Jack Ryan is very detail oriented and meticulous, and you can see in the video that he did a great job stocking!

He could have ignored him. He could have made an excuse and said he couldn’t allow him to help. Instead, he let him have his moment and in turn gave my family a moment we will never forget.

My dad texted the video to my brother and I two days ago and I immediately teared up. This means so much to our family because there was a time when Jack Ryan could barely handle going into a store. To see him working and feeling a sense of accomplishment was a great moment for us. It might seem like nothing to others, but as you can hear my dad say in the video, ‘I’m watching a miracle right now.’

What I’d like people to know is they shouldn’t be scared to follow in Jordan’s footsteps. I understand that approaching someone with a disability may be intimidating if you feel as though you might not say or do the right thing to help them, but Jordan just went for it! Step out of your comfort zone and give someone a chance. People with disabilities are capable of producing quality work and thriving in a work environment if given the right support. I hope Jordan’s act of kindness and selflessness inspires others to ‘be a Jordan.’

I really was shocked completely by Jordan’s kindness and patience. He didn’t have to do that. That’s pure, raw selflessness. Let’s find out who ‘Jordan’ at Rouse’s on Drusilla is and hook him up with something awesome.”

This story was submitted to Love What Matters by Delaney Edwards Alwosaibi of Baton Rouge, Louisiana. Submit your story here, and subscribe to our best stories in our free newsletter here.