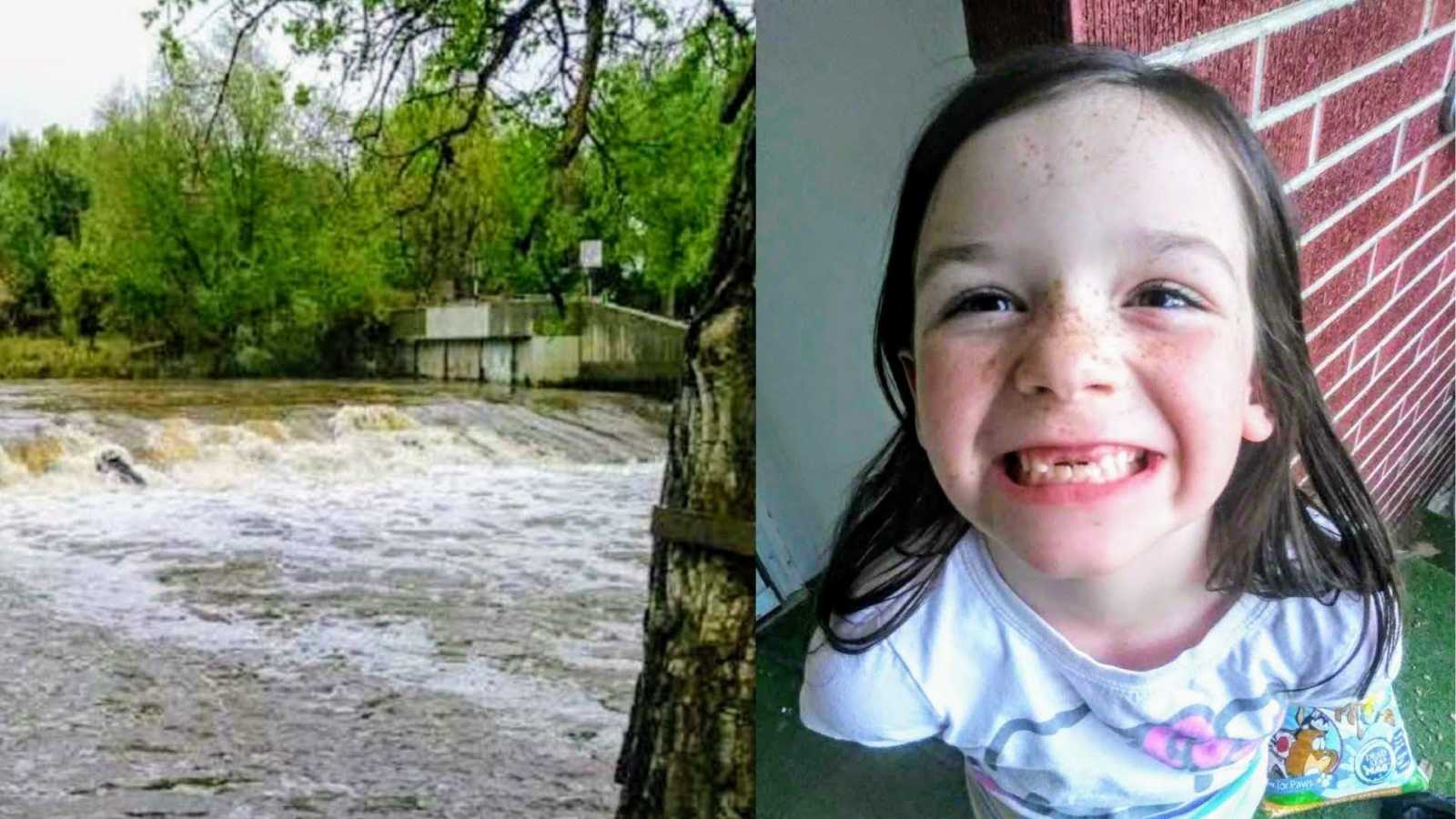 “My daughter, Rylee, was born on the 4th of July and is every bit of a firecracker that you could associate with that day.

Last year, we had her birthday party on the Sunday before her actual birthday at our local park in Loveland, Colorado. They host an array of events there as well as have a splash park and access to the Big Thompson River. That day, there was a Farmer’s Market going on during her party that we all checked out while the kids played.

Before her friends from school had to leave, we gathered them all to do cake and presents.

Then we sent them to the splash park for a little longer. After her friends left, we (myself, my two sisters, my best friend, my niece and nephew) decided to go down by the river.

The city built a large platform/patio type area along the river as well as large (wide) steps entering into the river gradually. The water was moving pretty quick that day and the steps were quite slippery, so we had all the kids sit towards the back of the step with strict instructions not to go further into the water because of how slippery it got.

I was sitting on the step with my feet in the water, my daughter Rylee to my left, my one sister right in front of me and holding her 2-year-old son. The other two kids were on our right along with my other sister directly next to them. My best friend, Stephanie, was standing just behind me on the platform. Rylee wanted to get closer to the other kids and went forward on the step more than she should have and slipped in.

She was pulled away instantly with all of us right there. Stephanie yelled, ‘Rylee’s in the water! She’s getting swept away!’ When I turned, she was completely under water, face down. There was no scream or cry. She was completely engulfed. I could see maybe about 1/2 inch of the top of her head. Pure panic was going through my mind, but didn’t have time to think of react. Without hesitation, I went in right after her and dove into the water. The current was taking her away rapidly. I am an avid swimmer, but this was different. When I got to Rylee (after what seemed like an eternity), I could barely keep my head above water and was having a hard time getting her back to the steps and out of the river.

A group of teenage girls witnessed this and were near where I was struggling with Rylee. They helped grab her to get her to safety and helped pull me out of the water. I already knew something was wrong with my foot and it was confirmed as I literally felt it crumble beneath me as I put weight on it once I got out of the water. I was in shock and focused on my daughter’s well-being, so I pushed through unbelievable pain and hobbled back to the area where the rest of my family was with all the party gear.

My mom saw me coming and thought I must have gone for a quick swim. As I got closer, she realized that I was not walking well and was terrified. My sisters and best friend had the kids coming back. We got Rylee sat down and checked her out. Physically, she was okay. She was very scared but alive and breathing. Praise the Lord! We got her dried off, warmed up, and comfortable as best we could.

I knew I needed to get to the hospital ASAP. My sister Stephanie went and got my car and parked it as close as she could to our tables. I was able to hobble over to it. She got me to the hospital and we got X-rays done right away. They showed that ‘nothing was broken.’ I knew better, so had them do an MRI. And, sure enough, I had shattered my cuboid bone and broken several others.

They said I wouldn’t need surgery and sent me home in a boot. Although relieved at that news, I couldn’t ignore the incredible pain. As it was a Sunday, I wasn’t able to get any pain medication until 11 am the next day. The pain kept me up but watching over my daughter kept me sane.

I went to an Orthopedist that same week and was told that the hospital was very wrong and I would definitely be needing surgery to fix it. After getting the run around from several doctors, surgery was set for September 12th, 2018, more than 10 weeks after the accident!

During the remainder of the summer, Rylee and her brother were in day care with lots of pool days planned. She had always loved to swim and loved to be near water. However, now she was afraid to get near any water and did not want to get in to swim for any reason.

Along with my family, babysitters, and friends we were able to work with her to overcome her fear and she was back to swimming by the end of summer with her ‘Frozen’ life vest on, which she still uses now. We still talk about water safety and how quickly accidents can happen to this day. We all have a much bigger respect for water and take no chances. We also no longer go to the fairgrounds park or river.

It’s almost one year later and my foot is still not healed and I have another surgery on the horizon (surgery #3), the most invasive one yet. However, my daughter is still here with me and safe. That’s what matters most. She calls me her hero and I thank the Lord for every day I get to be with her and my son.

When I think back on the accident, I am forever grateful. A broken foot can be fixed, but if I lost her, my heart would’ve never healed.”

This story was submitted to Love What Matters by Shawna Cowen of Loveland, Colorado. Submit your own story here and be sure to subscribe to our free email newsletter for our best stories.

‘At 17, I got pregnant with an older man with 3 kids. Months after labor, blood was trickling from my baby’s mouth. ‘Everything is going to be okay. It has to be.’ I begged him to breathe.’