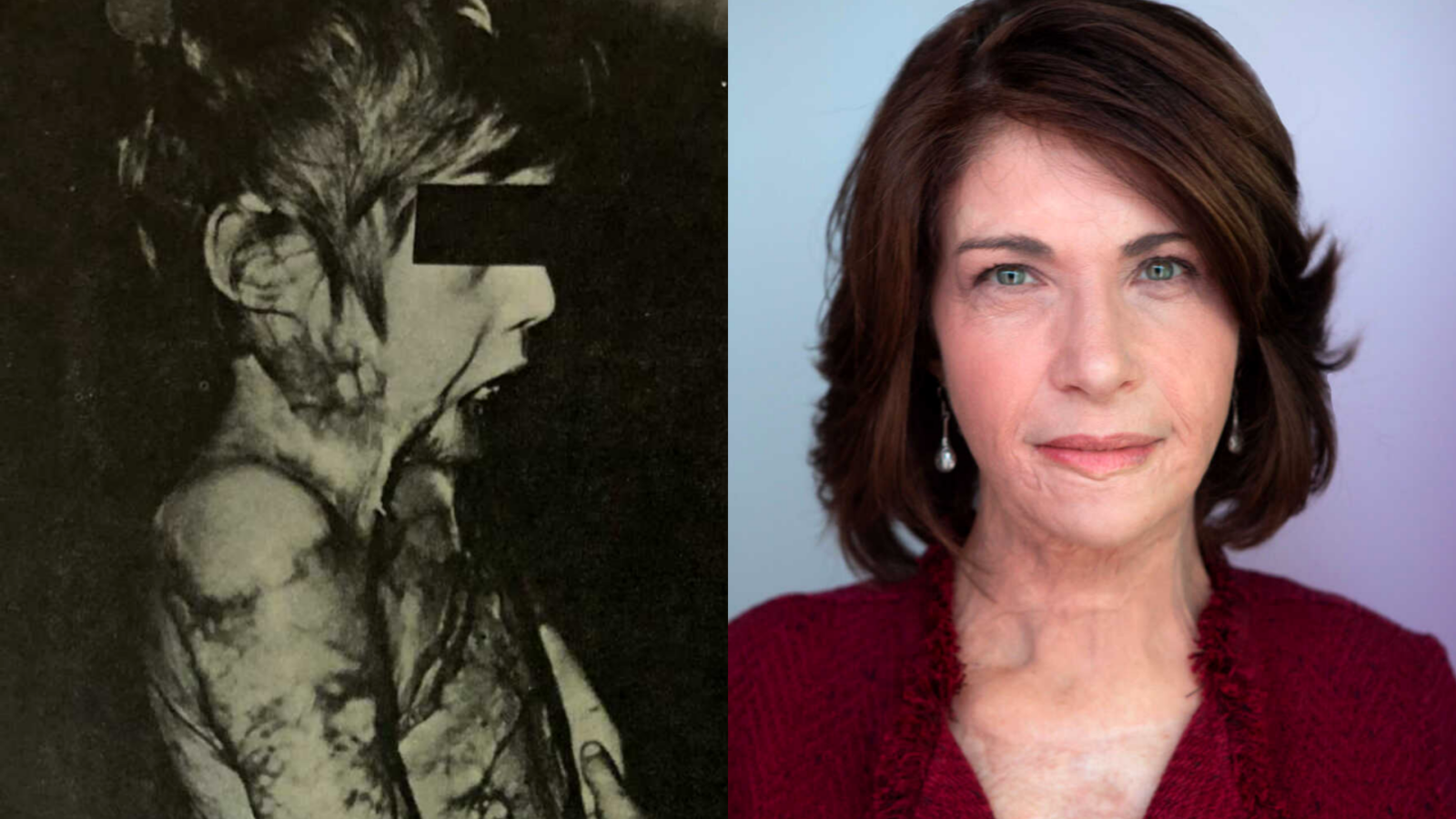 Bullying As A Burn Survivor

At five years old, I walked home alone from kindergarten, as kids ran past me, yelling these insults. To be fair, they weren’t wrong. My face and body were covered in burn scars, bright purple and red. The fire had burned away my bottom lip, chin, and neck, and my arms were fused to my sides. I did truly look hideous. However, I wasn’t evil…but I’ll get to that part in a moment.

My mother set us both on fire the year before. She didn’t intend to. She mistakenly used a highly flammable household solvent to start a barbecue, instantly engulfing us in flame. In a panic, my mother ran away, throwing herself into the nearby lake, but leaving me, her little girl, behind in the flames. Third-degree burns claimed two-thirds of my tiny body, leaving permanent scars which I carry to this day more than 50 years later.

Luckily, I received wonderful medical care. After about 70 surgical procedures, I look pretty good. However, I would like you to process what I just said. 70 surgical procedures represent tremendous swaths of pain, time, social isolation, blood, and fear. Burn recovery is a lifelong process; physically, emotionally, and especially socially.

Being bullied as a child was just the beginning. Cruel taunts ended as my peers matured, but social struggles remained. To this day, I am stared at in the grocery store, on the street, and oh boy, at the beach. Dating, or rather lack of dating, broke my heart. It took me years to find love, although eventually, I did. But even now, as a psychologist, author, wife, and mother, my social struggles are not over. And at least in part, I blame the movies.

I remember when Return of the Jedi was released. I went to see the film with friends, eager to learn more about our heroes Luke, Hans Solo, and Princess Leah, as they battled the quintessential villain Darth Vader, with his creepy labored breathing. At the climax of the film, we learned that Darth Vader wore his black mask to hide his hideous burn scars. So, the reason that Darth Vader turned evil was because he was burned? That’s the explanation? I sat in the movie theater, stunned.

This was only my first exposure to this theme. There were the Freddy Kruger movies, in which the blood-thirsty murderer’s backstory, again, was that he was burned. Phantom of the Opera, the most popular musical of my youth, featured a disfigured villain. There have been countless other disfigured bad guys over the years: Voldemort in Harry Potter, Kylo Ren and Emperor Palpatine in Star Wars, and The Joker to name just a few. What is going on here?

Even animated films aren’t safe. In my lifetime, there have finally been Disney princesses who were Black, Latina, Native American, and Chinese. But you know what all those princesses have had in common? They were all beautiful. On the other hand, how about Scar in The Lion King? Here was a scarred villain so defined by his disfigurement that it became his actual name. Beauty and the Beast could not be clearer about the messaging. Belle, our heroine, was good and therefore beautiful, and literally named for her loveliness. The Beast started off as a handsome prince. When he acted mean, an enchantress turned him ugly, but when he learned to be good, he became handsome again.

Beauty = good; disfigured = bad. Hollywood relies on this cheap messaging to signal to its audience. When an actor comes on screen with a facial scar, you can assume that character will be evil. You don’t need to hear ominous music. You don’t need the character to maniacally twirl a mustache. As soon as you see the scar, you know what’s coming.

Contemporary Film Is Still Getting It Wrong

My most recent encounter with this theme was The Batman. I had been looking forward to watching this movie for some Friday night escapism. But, when The Penguin appeared on screen, I sighed. Here was Colin Farrell, heavily made-up beyond recognition, and sporting a prominent facial scar on his cheek. To be clear, The Penguin has never had a scar before. It is not part of his back story. It was just lazy signaling that The Penguin was… you know…evil.

Other marginalized groups today generally receive fairer portrayals. Over time, Hollywood has come a long way in improving representation. Black characters can be heroic; gay characters are rarely reduced to stereotypes. Overweight characters can be presented in the full complexity of their humanity. However, disfigured people are still fair game. In fact, I can’t think of any other marginalized group that is so relentlessly negatively portrayed on screen. And it continues to happen.

The United Kingdom is ahead of us. The British Film Institute no longer funds movies featuring disfigured antagonists. There was a #IAmNotYourVillain movement, along with Face Equality International, an organization devoted to equal rights for disfigured people. In fact, it is about to be International Face Equality week, from May 17-24. But have you ever heard of Face Equality Week? I’m guessing not.

What You Need To Know

Let me ask, do you know anyone with facial scars? Someone who is burned, or has a birth defect, or survived cancer or a car accident? I imagine you do. I also imagine that this person is far from evil. Most likely, they have survived a challenge, suffered trauma, and are a potentially interesting human being of depth.

Beautiful people are no more likely to be good than disfigured people are likely to be bad. In fact, most disfigured people are kind, sensitive, and caring. They have suffered a fair amount just being in society and know the scarcity and importance of kind acceptance. Because they have suffered trauma, they can generally empathize when life is painful for others. My burned friends are often the first to reach out to me on Facebook when I am having a down day, offering words of encouragement, boosting me up. Burned people frequently volunteer, visiting other burned people in the hospital, and running camps for burned kids in the summer. You know, not evil at all.

I hope that someday Hollywood will take a lesson from the British Film Institute and stop making their villains disfigured. It is a discriminatory and outdated trope. These depictions foster prejudice and fear of people whose lives are already hard enough. And for disfigured folks, it is upsetting to be portrayed with such negativity, again and again.

The next time you see a scarred movie villain, remember that disfigured people are just like you, kind, well-meaning, and not in the slightest bit evil. How else can you help? Smile at us and say hello. We are tired of being stared at, or (just as painful) awkwardly avoided. Teach your kids that disfigured folk are people just like them inside. We just look different, and we have survived something hard. We aren’t villains. We might even be a bit heroic.”

‘He went into a silent seizure. We heard ‘code blue’ over the loudspeakers. ‘If it’s his time, let him go.’ My mama heart just knew.’: Mom loses son to fatal Sanfilippo syndrome, ‘God entrusted me with the most beautiful human’