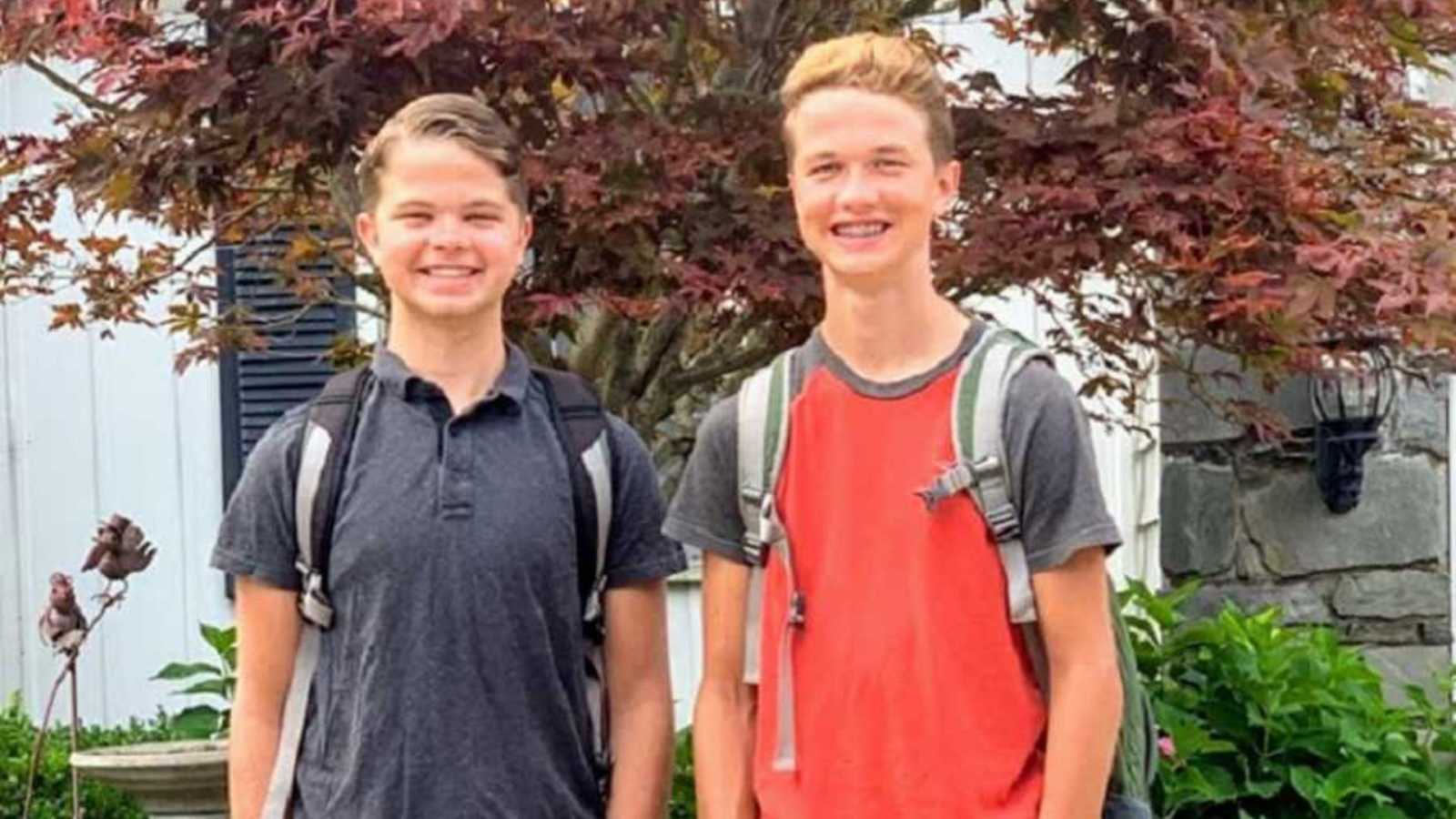 “According to UNICEF, 26 percent of people on Earth menstruate. That’s 1 in 4 of us. And yet, most women and girls will tell you that merely talking about having your period in public is still pretty taboo. But as the mom of a 10-1/2-year-old daughter and two teen sons, I’m hoping to change that.

Earlier this month, I posted a photo of my sons, Micah, 15, and Elijah, 16, to the private Facebook page and watched it spread.

It was an image I snapped in Target while we were back-to-school shopping.

‘My teenage boys helped me shop today,’ I wrote, ‘which included buying their little sister’s first bras… because breasts happen.’

And for good measure, I added, ‘Both boys carry a tampon and a pad in their backpacks in case one of their friends needs one. Just a mom out here, trying to erase gender taboo!’

Within hours, the post climbed to thousands of likes and comments, and as I write this, it has over 65K reactions (and counting).

For the most part, the post has gained incredibly positive feedback.

But it’s also prompted many women in their 40s, 50s, and 60s to share horror stories from their youth, recalling times when they desperately needed period supplies and did not have them.

One lady recalled a time she bled through her clothes as a young girl, and a male friend offered her his sweatshirt to wrap around her waist. She has never forgotten his kindness.

Most stories, however, had a recurring theme of humiliation, shame, and helplessness.

Countless women recalled fathers and husbands who ‘would NEVER have gone to the store to buy me period supplies.’ Some people were downright offended that I was attempting to change the age-old ways we’ve handled periods.

One thing is clear: Menstruation is still a major gender taboo that we have not let go of. But I’m doing my best to raise men who see past it.

‘Bleed-throughs happen,’ I’ve explained to my boys. ‘They are mortifying and can be traumatizing. Kindness and understanding from ANY friend goes a long way. Be that person.’

In reality, our bodies are doing what they were physically made to do. So, why should it be embarrassing?

I first started talking about this with them last year, after reading an article about a man on the Appalachian Trail who gave a tampon from his backpack to a woman who had bled through. He reportedly said something like, ‘It’s no big deal; I grew up with a mom and sisters … ‘ and that rocked my world.

As I was driving in my car one day, I looked at my boys in the rearview mirror and nonchalantly told them that they should probably put a tampon in their backpacks in case any of their friends had an emergency. They seemed to think it over and didn’t say much, because teenagers.

But at the end of the last school year, they saw firsthand what I’d been talking about when one of Elijah’s friends had a bleed-through.

All of her friends had tampons, but this student is only allowed to use pads. Elijah speculated that it might be because of her religious beliefs, and after that day, took it upon himself to make sure that he and Micah had pads in their backpacks, just in case.

Like many public high schools, ours does not offer or sell period products. And with the student population being 60 percent female, you can see how that can present a problem.

According to one 2019 US study, 92 percent of high school students reported needing period products while at school, but only 42 percent of schools offer them (and most of those cost money).

This year, Micah let all his close female friends know that he always keeps a sweatshirt in his locker and a tampon in his backpack.

(‘You know, in case you have an emergency,’ he told them. ‘My mom wanted you to be covered.’)

He said that the girls seemed a little embarrassed for a minute, but ultimately accepted it.

Elijah, on the other hand, told everyone, all of his friends, both male and female.

He told me that although a few boys mocked him, most were like, ‘cool, dude.’ He said his female friends were much more receptive, even telling him he should keep some products in his car as well.

Raising teenage boys is basically a constant cycle of laundry piles, feeding voracious hunger, nagging, laughter, and little, quick, teachable moments just like this one. Anything you can do to help them navigate the difference between things that are a big deal (like keeping your friends safe at parties, being aware of your surroundings, and the safety of others around you) and things that are NO big deal (like puberty, periods, and yes, bleed-throughs) can make a huge difference.

As you normalize these things in your own family by regularly discussing them, they become normal to your kids, too. It’s my hope that kids of all genders, including transgender kids, know that my boys are a safe place to get period supplies, should they ever need them. But it is an even bigger hope of mine that these small actions change the way kids in our high school handle and view the whole subject.

When I first posted in that private Facebook group, I thought that a few other parents might think sending their boys to school with period supplies would be a great idea for their kids too. And while there were a few (very vocal) naysayers, the vast majority of people did react positively. From single mothers of teenage girls to parents of young boys (who will ‘remember this for when they are older’), they all seemed to agree that the road to change includes erasing period taboos, maybe a couple of teenage boys at a time.”

This story was submitted to Love What Matters by Tara Ahrens of Fort Wayne, Indiana and originally appeared on Cafe Mom. You can follow her journey on Facebook. Submit your own story here and be sure to subscribe to our free email newsletter for our best stories.

‘Step right up!’ my teacher said. I half shook my head no, turning pink. I slowly rose, my legs glued together. The floodgates opened. I was 5 feet from the board when someone shouted, ‘OH MY GOD!’

‘Do you know what sex is?’ I pointed to the diagram. ‘I’m SIX, mom!’ He squirmed and furrowed his brows.’: Mom says we shouldn’t ‘have the sex talk,’ ‘we should have many’