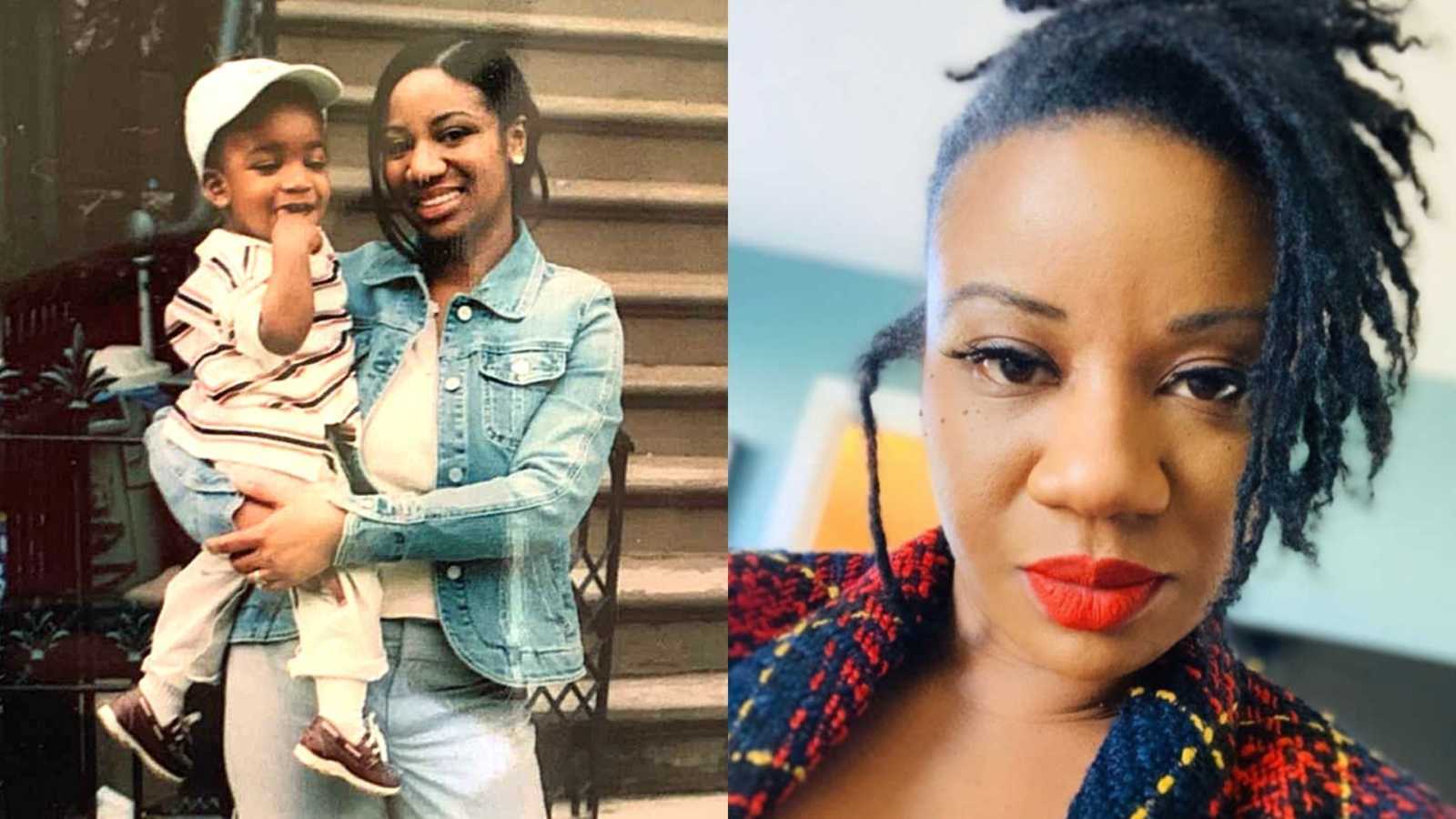 “It was the first morning I didn’t experience any morning sickness in the first 3 months of my pregnancy. I was so excited I ordered a huge breakfast from our company’s cafeteria. Bacon and cheese omelette with rye toast, potatoes, and an orange juice. I got to work early, just so I had time to eat, then begin my work day. I hadn’t gotten through even half of my breakfast when all we felt was the building shake, violently. None of us knew what to think of it. I assumed it was one of those big dumpsters rolling through the floor above us. I recall looking up at my coworker in the cubicle across from me and saying, ‘What the hell was that?’

As I continued to eat, my boss, who had a corner office by the window facing the World Trade Center plaza, began yelling, ‘Bomb! Bomb! Get out of the building!’ Honestly, we all looked at each other questioning his rant, but we also realized our boss worked for Dean Witter during the first bombing in 1993. So, he must know something! As we walked over to the window, we saw nothing but papers floating in the air. Everyone became hysterical in what seemed like seconds. Everyone then began screaming and saying, ‘BOMB! BOMB! GO! GO! GO!’

I went to grab my purse, but found myself pushed forward in a line of people going towards the stairs. We worked in 5WTC on the 6th and 7th floor. We all walked calmly down the stairs, but when we got to the concourse, it was complete mayhem. We were still unsure of what exactly occurred. We were checking in on where our other coworkers were and just looking at each other, baffled. Everyone was trying to make calls and no one was able. I remember it being so bizarre no one could use their cell phones.

We walked outside the building and stood in front of the cemetery. I was just looking up, and that’s when I saw the tower was on fire. As I continued to stare, I realized people were hanging out the windows waving what seemed like clothing. I felt completely helpless and terrified for them. I just couldn’t imagine the pain they were feeling to hang outside such a tall high rise. They had no fear of falling because the pain they had to endure burning was much worse.

A little time passed before I realized I was still way too close, and I started to walk further away from the building. At that time, people were crying and screaming and looking to others for some type of explanation. Pure confusion and dismay were on everyone’s face.

As I walked down Nassau St., I met up with my other co-workers, and we stood together. We were still questioning what was happening, but also witnessing the people jumping from the building and waving clothes out the windows. We were all horrified and trying to figure out what to even do next.

As we stood and waited for a while, we saw two unbelievable sites I couldn’t wipe from my memory even if I wanted to. First, we watched two people jump from the fire holding hands. We screamed in horror. It was like we were watching a movie in slow motion. Second, we all watched the second plane hit the second building. When the plane hit, we ran, and most of us were separated again. My friend fell, and I went to help her get up, but she was getting trampled. I began pushing people off of her, and she finally got up. She couldn’t run or barely walk, but I stayed with her. ‘OH MY GOD! OH MY GOD!’ people were yelling. ‘What the f*ck is going on! JESUS CHRIST!’

We met up with a few more people and got my friend to the NYU medical, where she was admitted. We left her there and continued on our way. At this point, there were three of us who were still together. We decided to try to get on a train to get home. We felt better knowing she was safe and truly thought it couldn’t get any worse, so it was just time to get out of the city.

As we were going through the turnstile, all we saw were people running towards us and a huge cloud of what seemed like smoke, but was in fact, dust. We quickly turned around to run out of the station. On my way up the stairs, I saw this old lady who was holding on to the banister  for dear life while everyone pushed passed her, and eventually, knocked her over. I tried to help her, but she was in too much shock to understand what I was trying to do, so I had to leave her. I always wonder what happened to her. I think how my grandmother used to travel out to Nassau St. often to shop.

When coming out of the station, you couldn’t see in front of you. It was like walking in a sandstorm. People were passing us covered in soot and blood. It was so quiet… surreal. All I could hear was coughing and sobbing.

There was a vendor who had some head scarfs and I grabbed one to cover my face. My mom still has the scarf til this day. I decided to walk toward the Brooklyn Bridge. My friend lived in Harlem, so we both hugged and went our separate ways. While heading towards the Brooklyn Bridge a lady was asking if anyone was going to Brooklyn. I said, ‘I am,’ and we linked arms and started to walk the bridge. We didn’t know each other at all, but you could tell, in that moment, we both needed someone to get us through this, even if it was just to get across the bridge. We never spoke a word to each other. We just linked arms and walked.

People were running across the bridge hysterically screaming, ‘They are going to hit the bridge next!’ All I could remember was thinking about how drowning was my biggest fear in life, and it WAS NOT going to happen that day while I was carrying my unborn son. As we walked the bridge, the first building collapsed. Everything shook and we both knew we had to get across this bridge faster. She looked at me and asked, ‘Baby, can you walk faster?’ I shook my head yes, and we were damn near jogging at this point. When we got to Brooklyn, we hugged and cried, and then I began my journey home alone. She met up with some folks she knew. I had no bag and no money and was still just pressing forward to get to the nearest pay phone to call home collect. Every pay phone line was ridiculously long. People were covered in soot, screaming and crying.

I continued to walk, and finally, I got to a point where there was no line for the phone, and I called home. I will never forget how my mother and grandmother screamed and cried on the phone. Since I dialed my grandmother’s phone collect, she screamed and cried to my mom, ‘It’s Kim! It’s Kim!’ My mom got on the phone and was crying asking where I was and if I was okay. At that point, it all hit me what I had just survived, and I cried uncontrollably while rubbing my stomach, until they came to pick me up.

The days following, I went to the doctor to check on my pregnancy. They checked his heart rate, and my breathing as well, and all seemed good. I’ve heard a few horror stories about babies born after 9/11 with so many issues. I consider myself and my son so blessed. I recall, after my son was born, which was 6 months later, there was a terrible rumble of thunder. It shook the whole block, and all the car alarms went off. I grabbed my son, his bottle, my purse and cell phone, and went into the bath tub. My mom called me asking if I heard, and I was hysterically crying. She began to laugh at me, and I even laughed at myself, but then we both realized I was definitely traumatized from 9/11. Til this day, I refuse to get on crowded trains or elevators, due to all the stories I heard about people being stuck during 9/11. We just had an earthquake out here in NC, and I jumped out of the bed, got dressed, and was wide-eyed and ready to run… My reaction time is still extremely fast after the events of 9/11. I feel so blessed to be alive.”

This story was submitted to Love What Matters by Kimberly John-Burns. You can follow her on Instagram. Submit your own story here and be sure to subscribe to our free email newsletter for our best stories, and YouTube for our best videos.

‘My daughter arrived on 9/11. I woke up to see the first tower falling. I thought my family was watching an action movie.’: Mother gives birth on September 11th, ‘I was not emotionally OK’