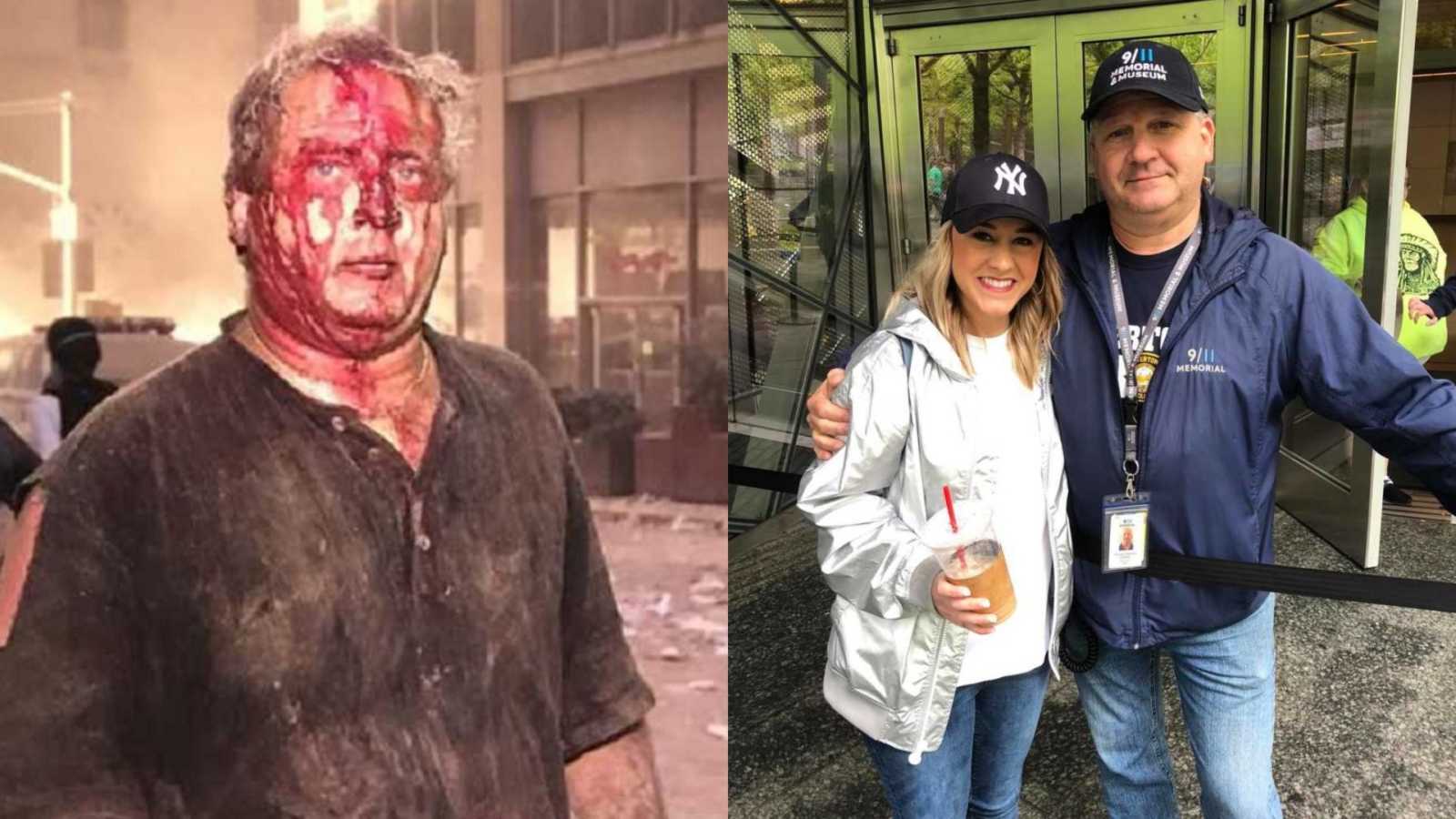 “Our driver dropped us off near the 9/11 Memorial entrance. It was POURING down rain and the line was long so I ran to the nearest cover, which was by the museum exit door, while Clint went to buy tickets. Standing there was a police officer and a museum facilities dispatch worker. I eavesdropped on their casual conversation for a few minutes and finally mustered up the courage to ask them where they were on 9/11.

‘The 47th floor of the North Tower’, the museum worker said. Thomas Canavan, one of 20 survivors of the collapse. Wow. He proceeded to tell me his harrowing story of being buried alive, crawling through 46 horizontal and roughly 30 vertical feet of rubble, making it out alive, severely injured (but not realizing it due to adrenaline) and sadly having lost the friends he started with.

We talked for 20 minutes as if no one else were around. I asked questions, and he gladly answered. One of the many things from that conversation that stuck out was that he said it’s so deceiving on TV when all you see is one cloud of dust and a small hole from the plane. The reality you don’t realize at home is that it was desks, file cabinets, chairs, staircases, elevators, and people falling down on him. The little holes in the Towers on TV from the planes were really 6 stories tall. The magnitude of this tragedy was so much more than most of us can imagine from our television screens. Something that’s hard for us to comprehend.

Clint came back with museum tickets for 11:30 a.m. It was 10:45 a.m. so we were going to have to wait a bit. The rain had subsided by now. Tom without hesitation said, ‘You guys come with me.’ He escorted us past the (still) long line, past the police officers, and told the security guards, ‘these are my two friends, let them in.’ And without question we were quickly escorted inside, as if the President had just given orders. I could tell Tom was highly respected by everyone around. Before he left us, he told us to look for him in the museum; we would find his picture and the watch he wore that fateful day.

Sure enough, we found Tom’s watch displayed in a shadow box.

From the impact of the collapse, his wristwatch stopped; a moment stuck in time. The eeriness and irony. Tom told me that was the last day he ever wore a watch. It’s easy to think of September 11 as just a terrible tragedy in our country’s history. We so often forget that these were/are REAL PEOPLE, many who still feel the effects every day. Even something as simple as not being able to wear a watch, because it brings back haunting flashbacks.

We spent two hours in the museum, but could’ve spent days. As we exited the museum we saw Tom not far away. We hollered his name and ended up chatting a bit longer. Before leaving he said in his Northern accent, ‘See, us Yankees aren’t so bad after all. You never know what you’ll learn about people until you sit and talk to them.’ This made me reflect a little…while I was talking to Tom, probably 10 or more visitors came up to him and asked where is the bathroom, where is the museum entrance, nearest restaurant, and the list goes on. But I got the feeling that not many people took the time to ask him about 9/11: the reason we were all here. No one knew everything he had been through. I could only be thankful it was raining that day and I picked that particular awning to run under, or else I might have missed this happenstance and humbling conversation of fate. I can only hope he was equally as touched to share his story with us as we were to hear it.

When we told him goodbye, I let him know that we would bring his story with us back to The South, which is why I felt compelled to share with you today. I may never see my FRIEND Tom again, which makes me sad, but every September 11th I will fondly remember him and all of the other men and women who died and lived in the face of pure evil. As always, I am Proud to be an American.”

This story was submitted to Love What Matters by Kylee Tinney. Do you have a similar experience? We’d like to hear your important journey. Submit your own story here, and be sure to subscribe to our free email newsletter for our best stories.

‘He would count, look up, then scream ‘GO!’ The officer was helping us avoid the falling bodies.’: Woman describes feeling like a ‘walking zombie’ after surviving 9/11 attack in World Trade Center

‘I’m on an airplane that’s been hijacked. I’m putting a plan together. Tell the kids I’ll talk to them later.’: 9/11 hero’s final words to his wife, his heroic actions played out minute-by-minute

‘My daughter arrived on 9/11. I woke up to see the first tower falling. I thought my family was watching an action movie.’: Mother gives birth on September 11th, ‘I was not emotionally OK’