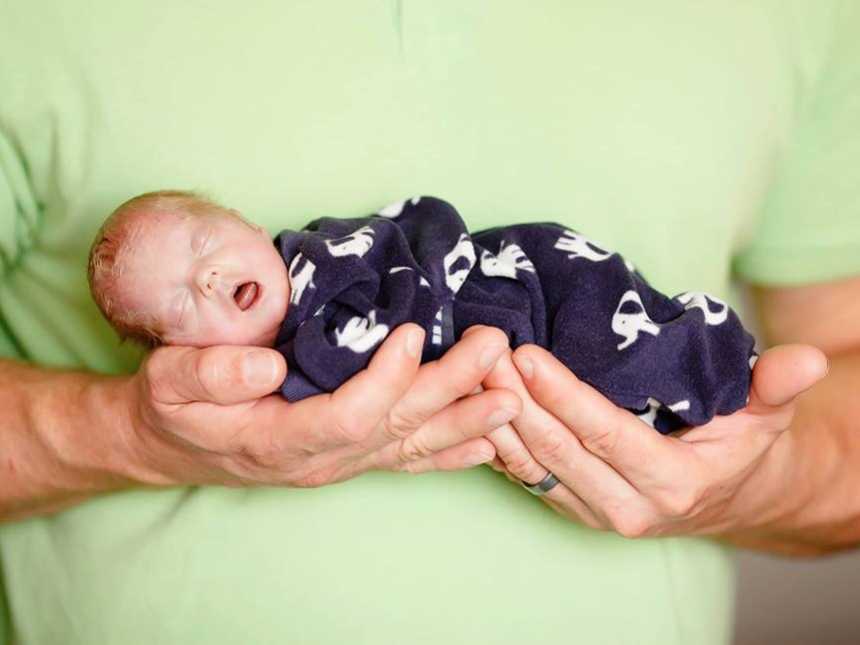 “The moment your baby is born, life changes forever. It’s a day every parent remembers, often filled with excitement as you meet your precious baby. After years of infertility, my husband and I finally received the news we dreamed of. But, that feeling of hope was met with heartache just months later, when we faced the unimaginable losses of two of our children. The day my triplets were born, I became a parent, forced to learn how to balance life between heaven and earth.

I’ll never forget the moment I found out I was pregnant. For me, it was a day my husband and I had hoped and prayed for. Infertility led to many sleepless nights, frustration and hope, followed by heartache. It’s strange how life works out—my husband and I spent years trying not to get pregnant, yet when we were finally ready to start a family, infertility plagued us.

As we sat in the fertility doctor’s office, my heart was racing. We knew there was a good chance of twins, but we were in for the surprise of our lives. I was pregnant with triplets, two identical girls and a boy. As the news settled in, our shock turned to excitement. My husband and I were meant to be parents and we knew we could handle whatever God had blessed us with. Our excitement continued for months, as we began to stock our home with three of everything. Our hope was as high as the boxes of diapers stacked in the nursery; our lives would soon be complete.

But life doesn’t always go as planned. After several complications, the days of my pregnancy glow transitioned to fear as I faced hospital bed rest and a last ditch effort to keep my babies alive. On June 23, 2013, our lives changed forever. I went into labor at 22 weeks gestation, more than 17 weeks premature. My triplets weren’t considered viable by most hospitals around the world, yet our local doctors vowed to give our babies a fighting chance.

A glimmer of hope arrived as my first child, Abigail, was delivered. We witnessed a squeak and a kick from our tiny 1-pound baby. But within minutes it was apparent, her lungs were too weak. Our firstborn child passed away in our arms two hours later. The weight of our tragedy slowly sank in as doctors called her time of death.

‘Our baby girl would not survive’: Why the day this mom gave birth to triplets was ‘the biggest regret of my life’

By what we can only explain as a miracle, my two remaining triplets sat tight for 17 hours, critical time in the womb that proved to be life saving. While doctors expected the same fate as Abby, the entire room was shocked as both Parker and Peyton arrived with strong enough lungs to survive that first night. My two babies were whisked away to the neonatal intensive care unit, their frail bodies translucent, their eyes fused shut due to prematurity.

At just over 1 pound each, my children had a slim chance of survival. Those first critical minutes turned into hours, then days, then weeks. After making it through the first month, my husband and I were optimistic. We thought Parker and Peyton would eventually come home with us. But, our lives came crashing down like a wrecking ball, destroying our hopes and dreams in an instant.

When our babies were five weeks old, we were given gut-wrenching news. As we sat in a medical conference room, we waited anxiously for what we thought would be a routine update. While our daughter, Peyton, was doing well, our son faced a setback. Parker suffered a major brain injury. His weak little body survived surgery on his intestines, but the stress on his body was likely too much.

55 days after our triplets were born, we held our son as he took his final breath. Within two months, two of our children passed away. There are no words to describe the unbearable pain of losing a child. Some days, the grief consumed me, making it difficult to even get out of bed. While people around me were going about their daily routine, my life was at a standstill. But through the pain, I found the will to move forward, balancing the grief while staying strong for our lone surviving triplet.

After four months in the NICU, our miracle baby came home from the hospital. It was not an easy transition, though, as our daughter was medically fragile, attached to an oxygen tank and monitor at all times. And as a parent of child loss, I found myself living in fear, paranoid that something might happen to our daughter. Those early days at home were often spent watching our child as she slept, a mix of hope and heartbreak as I watched our tiny miracle, wondering what life would be like if all three of our triplets came home.

Over the years, my husband and I have settled into our ‘new normal.’ It’s a tricky balance being a parent to both children in heaven and here on earth. As our daughter grows up, we are faced with the struggle of making sure she understands how special she is, yet finding ways to remember and honor her siblings who didn’t survive. For a long time, I thought I should sweep my grief under the rug. People don’t want to talk about child loss. Statistics show 1 in 8 couples suffer a loss through miscarriage, stillbirth or infant loss, yet it’s still considered a taboo topic. I see it firsthand all the time. The awkward look from a stranger often comes with pity and sadness when I mention that my daughter is not an only child. The one thing many of us grieving parents hope for is for people to remember our children. Something as simple as saying their name is a beautiful reminder that our babies existed.

It’s been nearly five years since that fateful day. These days, my husband and I are truly happy. Our surviving triplet is healthy, with an over-the-top personality and a special zest for life. As a ‘22 weeker,’ our daughter is the youngest baby to survive in our area. When we look at her, we can see all three of our children within her. And while the grief still creeps in at random times, I have learned to embrace the tears. I never want to forget my children. Those difficult moments have helped shape who I am today.

Rather than dwell on what could have been, we have learned to find life after loss. My triplets have shown us that strength isn’t measured in size, but in the will to live. As they continue to touch lives around the world, my children have proven that you can make an imprint in this world, long after you are gone. Life is short; you never know what tomorrow may bring. And thanks to my three beautiful children, I have learned to live life to the fullest, finding hope and happiness every single day.”