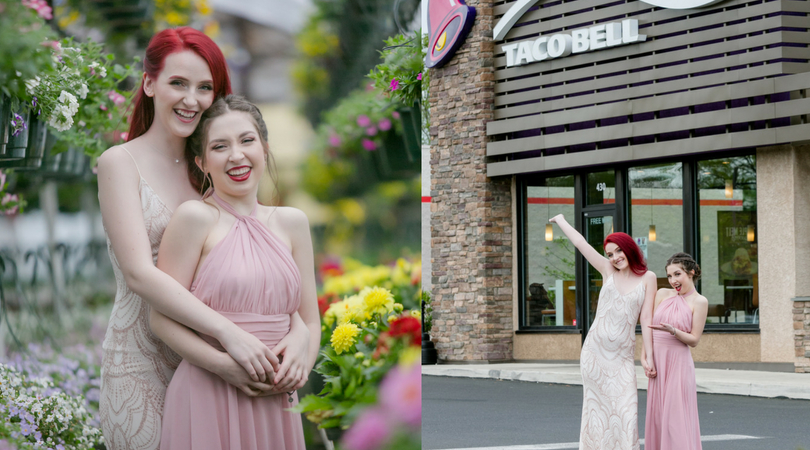 “My name is Abby Creneti; I knew I liked girls since I was around 14 and I never thought there would ever be the slightest possibility I would be out during my high school career. But things happen and good people come into your life. I came out to my family over the summer and they immediately embraced me with love and acceptance. I never take that acceptance for granted because I know so many LGBTQ+ kids don’t get to have that in their lives and it’s heartbreaking. I’m extraordinarily lucky for that.

I’ve been out at school starting this year, my junior year. The people at my high school are some of the most caring and supportive individuals I’ve had the pleasure of knowing. I hold Ry’s hand in the hallway and people grin and smile at us. We have countless peers commenting on our pictures with heart emojis and #goals and it’s everything I think a queer teen should be able to have. Everyone deserves love and no one should feel scared to share that love. I know that the world is changing for the better. I know soon everyone will be able to flaunt their love without fear.

As far as how we met, we kind of knew each other around school, but mainly around the school’s theatre department. Riley is an incredible actress, and I’m a sound technician in stage crew. She’s honestly radiant. A few months ago (yet it feels like forever ago), Riley asked me out to dinner, and I obviously said yes to this sunbeam of a girl. And after that, I’ve pretty much fallen completely down a hole of ‘Riley Riley Riley’ and I’m entirely okay with it. 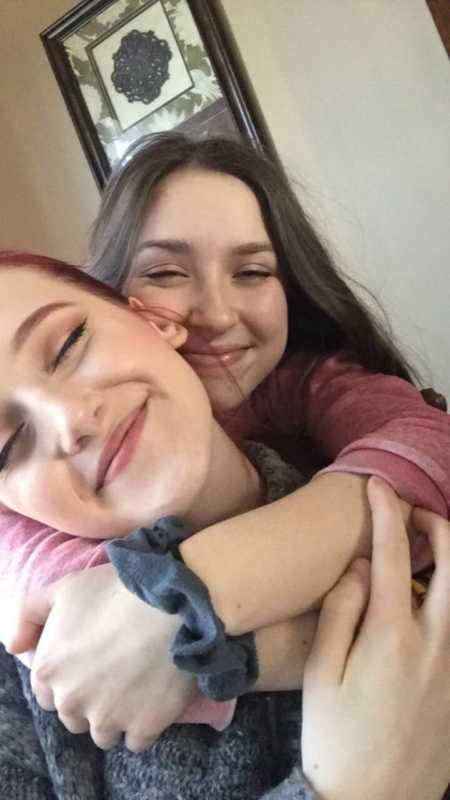 She inspires me. She really does. She writes music. Her voice is golden. She’s releasing her first single this month and I could not be prouder of her. Everyday I’m able to hold her hand and am reminded of the fact she’s going to change the world someday. Riley is my best friend and girlfriend and I could not feel any luckier than I am.

We’ve been together for almost five months now and I learned early on Riley would die for Taco Bell. She probably loves their tacos slightly more than she loves me. It’s a fact. I know her order by heart, and so do all of the incredible employees who work there and see her in the drive-thru five out of the seven days of the week. She often gets a ‘Hey! How ya doin’, Red?’ from the workers whenever they see her, she’s that much of a regular. I’m very fond of it.

We took pictures outside first, getting several stares from those inside. The two of us and Rachel had tears in our eyes because we were laughing so hard at the ridiculousness of two girls in prom dresses getting their prom pictures done in a very untraditional setting. I couldn’t believe it was real. I’m extremely lucky I get to do these kinds of things with the girl I love.

I think we’re also very lucky to get swept up in this whole Taco Bell ordeal because it overall makes people laugh and smile. It’s funny.

But the other side of it is we’re two teen girls in a very happy and healthy relationship. It makes me feel so proud of us, of myself too, for being so exposed about who we are. Seeing two girls in a relationship going to prom together creates open conversation. It allows for any LGBTQ+ kid to feel welcomed, to feel hopeful. We’ve gotten so much positive feedback from many who have seen the photoshoot, and it warms my heart just knowing these pictures can make people happy. Everyone should be able to go to prom with whoever they want.

I love my girlfriend, and I also love tacos. But probably not as much as she loves tacos.”

The following was written by Abby’s girlfriend, Riley Papile:

“My name is Riley Papile, my girlfriend’s name is Abby Creneti. I am a senior at Hatboro Horsham, she is a junior. I came out as bi last year. My parents are both supportive! I opened up to my friends and family about who I am and was welcomed with open arms. I am lucky to go to an amazing school filled with great students who support each other. when I prom-posed to Abby, I did it during school and everybody screamed and cheered for us. 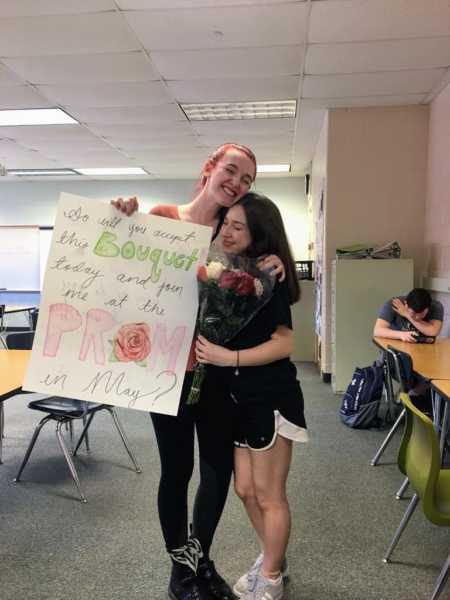 I’ve known Abby since her freshman year because of the theatre department. I was always on stage, and Abby was behind the scenes making us all sound good. We would say hi to each other in the hallways and hang out with groups of people, but we wouldn’t really text or snapchat or anything. Then, in our school’s fall play this year, I started to realize I thought she was absolutely adorable (still is) and I wanted to know more about her.

I kept this little crush on the down-low, until Christmas time came around. A bunch of people all over the whole school and other schools were doing a secret Santa text thread thing where whoever you sent it to had to get someone a gift or something—I don’t really remember how it worked. Abby just so happened to be my secret Santa! She got me a cute gift and wrote me a super sweet note. I decided to respond to it by asking her on a date. And here we are now after almost 5 months.

For Abby’s junior prom, she actually prom-posed to me by writing ‘Ry, taco bout prom?’ on a poster and getting me my go-to order. It was perfect. Everybody was just like ‘yup. makes sense.’ 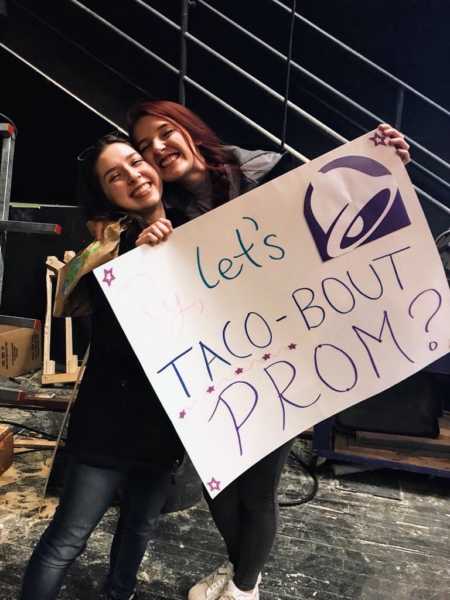 The idea for the Taco Bell shoot was actually brought about by the photographer, Rachel Beck. I’ve known Rachel since I was 8, and she has always taken my photos for every big event since then.

She of course knows of my love of Taco Bell and thought it’d be hilarious to end the shoot there after going to a couple other locations in the area. Abby and I loved the idea! The employees and customers laughed at us, and we had a blast.

This story was written by Riley Papile & Abby Creneti, 17, of Pennsylvania.  Submit your story here, and subscribe to our best love stories here.

‘I wanted to make it a night to remember.’: Football player goes all out with Promposal to make girl with Down syndrome ‘feel like a princess’ at Prom

‘Be My Beauty?’: Special needs prom-proposal at Disney World is the ‘best day ever’