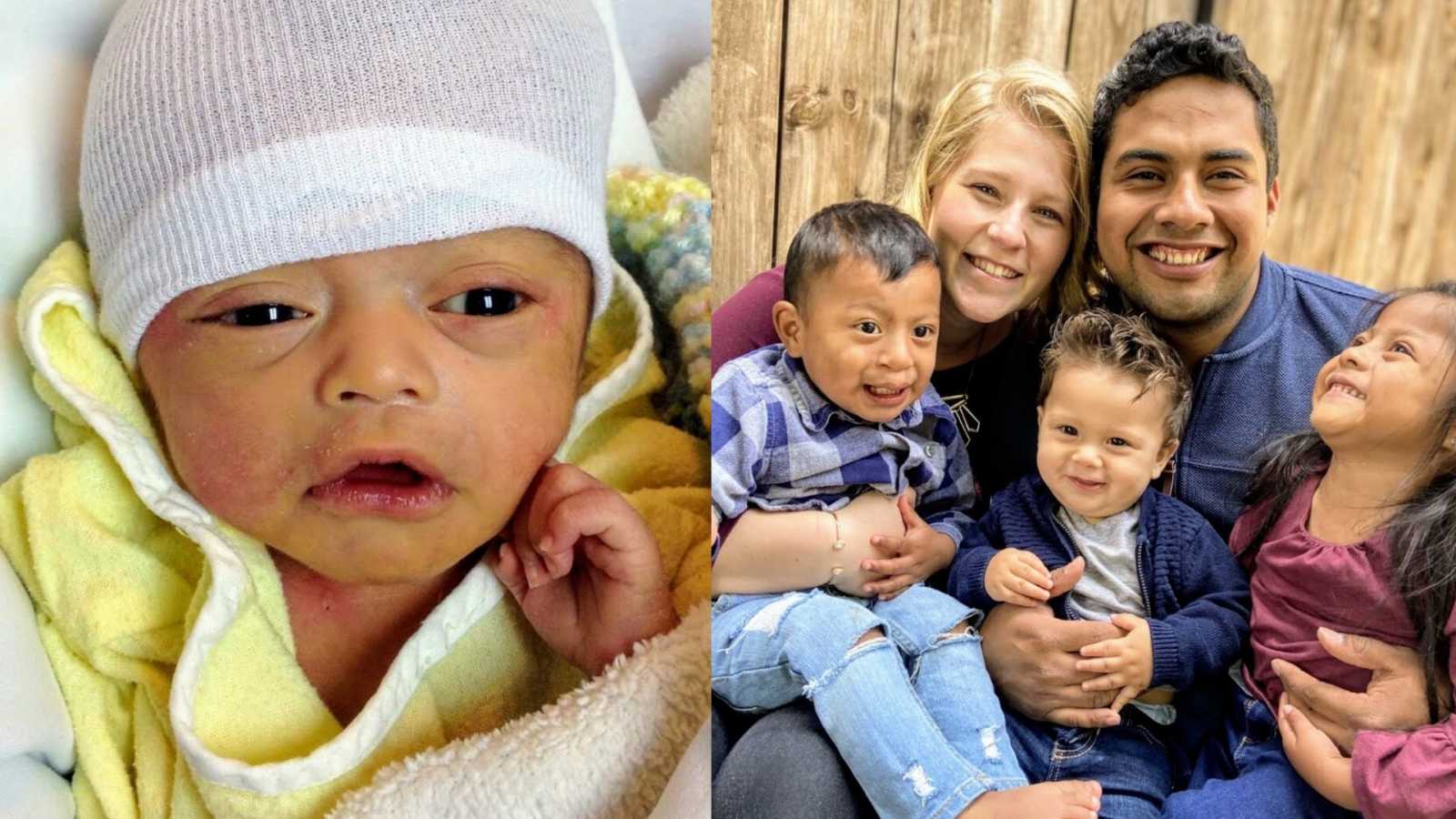 “I was 16 years old when my family moved to Guatemala. Up until that point, I had basically been living the American dream, but that move caused a radical 180 in me when I began to really see the world from a new perspective.

My life looked a lot different than most American teenagers. I was no longer learning how to drive, or playing on the high school volleyball team, or going to prom, or hanging out with friends. Instead, I was roasting marshmallows on active volcanoes, watching surgeries in the local hospitals, holding the hands of 11-year-old girls as they gave birth, translating paperwork, standing up against abusers in court, and bringing home abandoned babies.

Before moving to Guatemala, my parents adopted 5 children. We saw the damage institutional living could do, and how they thrived in a family. And so, my family founded Village of Hope in Guatemala. A family-style children’s home for children with special needs as well as adolescent mothers. We currently care for 55 children of various ages in our orphan care village, and we hired 54 Guatemalan staff members, providing jobs and in doing so, preventing more children from becoming orphans.

As a missionary kid, it was sometimes hard to find my place. I didn’t fit in as a Guatemalan, but I no longer fit in as an American either. I was stuck in the in-between. That is until I found my calling.

‘I’ll take her,’ I told him without hesitation, and a few hours later the social worker was at our door holding a bundle wrapped in an orange blanket. She explained that the baby girl had been abandoned due to her diagnosis. She had been left with nothing, not even a name. And she wasn’t expected to live very long.

I soon learned that this baby girl had a diagnosis called Hydranencephaly. In other words, she only had about 3% of her brain. Days passed filled with MRI’s and hospital visits, until one day I stood before the judge in the courthouse, asking if I could adopt her and give her a name.

‘Her own family didn’t even want her,’ the judge told me solemnly, ‘She’s probably not going to live, and even if she does, she’ll never have a normal life. So why would you even bother? Why do you care so much?’

I looked right back at her and I told her I cared because her life matters, and the value of our life isn’t decided by the number of our days.

I named her Emma Leigh. Emma means whole and complete, which is what we were praying for her brain, and Leigh is mine and my mom’s middle name and the name I had always wanted to pass on to my first daughter.

On April 16th, 2015 Emma Leigh passed from my arms into the arms of Jesus. She was born into a completely hopeless situation, but she died being loved.

During my time taking care of Emma Leigh, I learned that’s not the case for every child. Most children like Emma Leigh are left to die all alone. And I wasn’t okay with that, and I could no longer pretend kids like Emma Leigh didn’t exist. And so, Into His Arms was born. A place for kids who are diagnosed as terminally ill to be loved until the very end.

Through it all, there was Ronald. He drove me to most of her medical appointments, and he was the one standing by my side at her funeral. But I had never thought of him as more than a friend. After all, I thought, what man wants to marry the girl who takes care of babies who are terminally ill?

But Ronald knew from the very first day we met, as I interviewed him for a position at our ministry, I was the one he would one day marry. It took me a little while longer. I saw that he cared for these kids as much as I did. I let my guard down, and fell in love. We were married on April 22, 2017, in the ruins of Antigua, Guatemala. We had 18 ring bearers and 37 flower girls in our wedding because every child at Village of Hope wanted to be a part of the ceremony.

Just a few months after our dream wedding, I was sitting in court. I was talking with a judge and briefly mentioned about the profile of children our ministry works with. I told him we took in children who were considered ‘incompatible with life.’ He rapidly stood up, muttering something to the courtroom reporter, and went into his office. Dumfounded, I waited. Within a few short moments, he came back in and handed me a file. ‘There’s this little girl,’ he explained ‘For over a year now we’ve been calling places, but no one will take her.’ I scanned through the court file, reading page after page of medical diagnoses I didn’t understand, and then I came to the list of people and places that had been contacted, and their reasons for saying no.

‘We don’t have enough staff,’ some listed.

‘We don’t take kids with special needs,’ was the reply of others.

‘Not THOSE special needs.’

As I read down the list I realized any of those excuses could have applied to me, but I also realized that there was an innocent baby girl in need of a place to call home, and so despite every reason to say no, my answer was yes.

And Zailee Grace came to live with us at Into His Arms.

Just a few months later came our next surprise when we were woken up at 3 a.m. to the sound of police sirens and flashing lights. We hopped out of bed to find a police officer holding a baby boy.

The police in a town several hours from us had been contacted by the local hospital about a newborn who had been left there. They were transporting prisoners from one prison to the next, and since they were already making the trek, they decided that this baby boy could ride along to the place they heard would take children like him.

We invited both the police and the prisoners in for a warm meal before they continued on their way, and we welcomed Ezra Justice into our home, not knowing what the future would hold for him.

Since 2015, we have continued to foster children with different special needs. The Lord would also bless us with a little miracle from the womb–Atlas Jude. Atlas Jude means ‘to carry God’s praise all over the earth.’ Which is exactly what we stand for. We pray nothing would ever stop us from doing just that. Our hearts are that through our family others would see the value of these children who have typically been marginalized.

While some of the children in our care receive love and comfort measures during the brief time they have on this earth, others we get to see heal and thrive. But most of them don’t stay with us forever. We just get to be the lucky ones who walk with them during one of the most difficult and vulnerable times in their life. It’s not easy, opening your heart up to children over and over again, knowing the pain that comes with letting them go.

But with Ezra and Zailee, we get to be the lucky ones who love them forever.

After months of paperwork and jumping through hoops trying to learn the Guatemalan adoption laws, we became a forever family of 5 on June 3rd, 2020.

Ezra Justice is two years old now and still has multiple surgeries ahead of him, but he’s a warrior. He’s strong, and caring, and makes us laugh all day long.

Zailee Grace is a princess. Her list of diagnoses is still long, and her life expectancy is short, but she lives each day with joy and spunk.

Atlas Jude is the sweetest baby brother, he loves his siblings, and they love him too.

The journey that brought us here wasn’t always easy. Along the way I’ve had guns held to my head, I’ve held babies in my arms as they took their last breath, and I’ve sat in doctor’s offices holding one-year-olds after they’ve been raped.

I’ve seen the depths of the darkness, but I’ve also seen so much light.

I’ve seen families come together to feed villages of 2,000. I’ve seen doctors travel across the world to provide life-saving surgeries. I’ve seen orphans become sons and daughters. I’ve seen people rally around the widow, the orphan, the family struggling just to get by, because they care. Because they see their value.

There’s a lot of bad in the world, but I believe there’s even more good, and it’s up to us to be it.”

This story was submitted to Love What Matters by Addisyn López. You can follow her on Instagram and Facebook. Submit your own story here and be sure to subscribe to our free email newsletter for our best stories.

‘He sobbed when I drove him home, ‘No, Mommy!’ It was unbearable. In his eyes, we abandoned him.’: Woman adopts brothers 2 years after saying goodbye, ‘God had bigger plans’

“I fell to my knees. It couldn’t be. This baby boy was going to go to an entirely new home. I cried myself to sleep, praying he was safe and loved. My phone rang. When she said his name, I thought I was going to throw up.”

“My boyfriend didn’t pick me up, so I started to walk home. A man in an SUV asked, ‘Do you need a ride?’ He got right back on the road and headed in the opposite direction. It was so strong and out of place. I contemplated jumping out, but he told me to shut the door. He kept driving. The lights became fewer and the houses became fewer. I kept crying…I couldn’t stop.”

‘Frankly, I was about to pull a Jesus at the Marketplace and send tables flying. Parents, we have to LOWER OUR STANDARDS.’: Mom shares act of ‘grace’ while out with family, urges ‘pay it forward’

“‘Great idea, hon. Let him eat on the filthy restaurant floor!’ A woman at the table behind us turned around in her seat. She was definitely preparing to make some commentary, and my stomach dropped a little. But then she smiled.”

‘He’s only 11! He’s too young for college.’ She set out to prove I wasn’t smart. I got grouped with disruptive kids.’: 13-year-old attends college, ‘I found a place that challenges me’