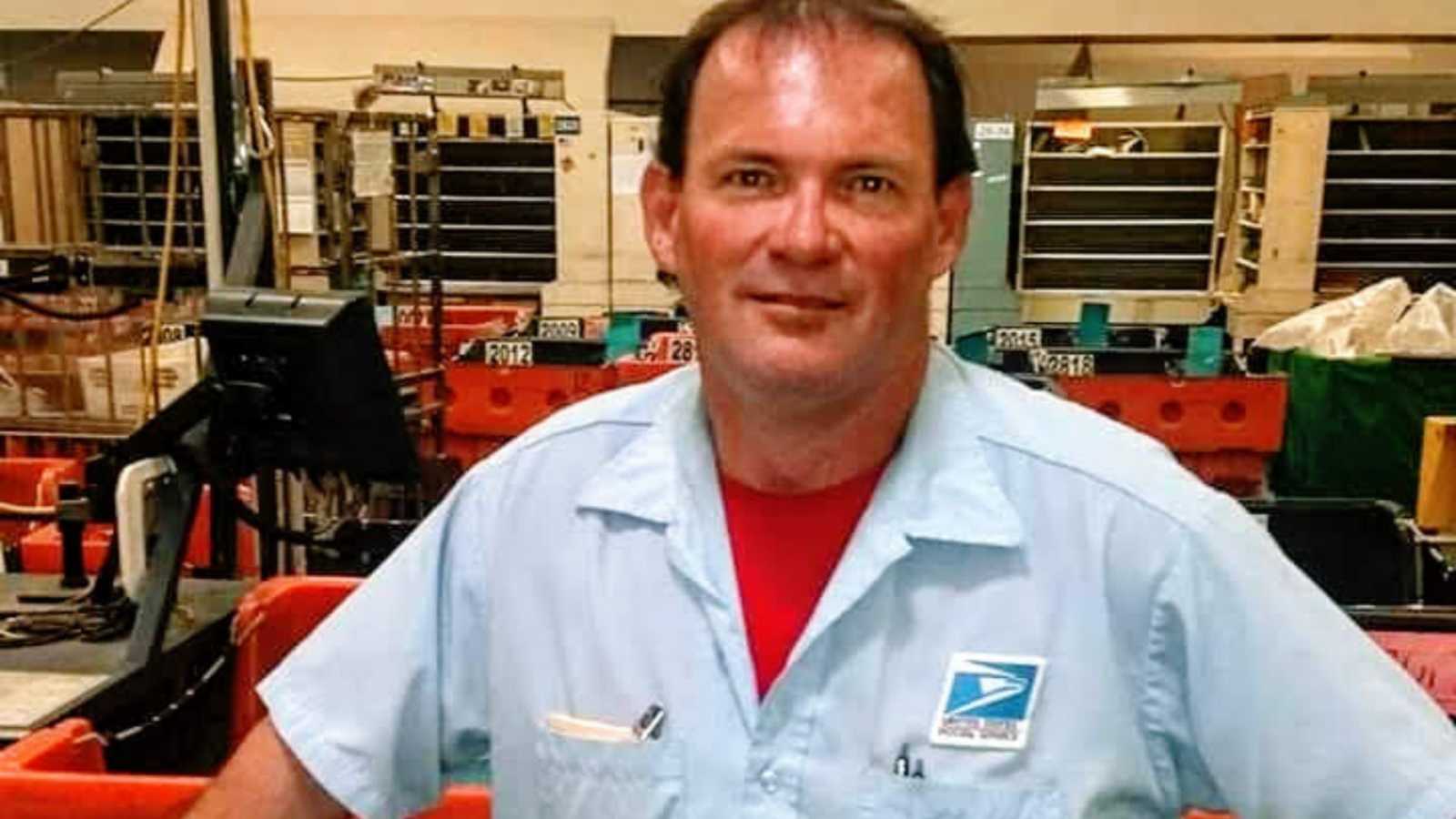 “They say, ‘Never judge a book by its cover.’

I have no doubt that a majority of you have walked out to your mailbox and grabbed your mail and placed most, if not all of it, in your recycling bin on your way into your home. Cussing the ads and ‘junk.’ This is the perception that the general public has of the U.S. Postal Service. We just deliver a bunch of crap that you don’t want anyway. So, the general public looks at the cover of that book, judges us, without opening it to view it’s true contents. So, I decided to share some of those contents with you and maybe help change some of your perception.

There are a good number of you at home right now during this very difficult time. We all are wondering and worrying about what’s going to happen next. I guarantee you, that if you watch closely today, you will see a postal vehicle in your neighborhood. Why? Because regardless of what is happening in our country, we will be out there providing a service to the American people. Probably the only service that you get that you are not taxed for. The postal tax was done away with in the early 70s. So yes, through catastrophes, extreme heat, brutally cold temps, blizzards, earthquakes, tornadoes, hurricanes, exhausting Christmas seasons, or whatever is thrown at us, we will be out there for you.

We also are not supposed to leave mail for the next day. So, if 5 carriers call in to work on 1 particular day, that’s 40 hours of work that the others have to make up in that day. We don’t have the luxury of leaving after 8 hours and picking up the next day where we left off. So when you see a mail carrier out delivering at 10 p.m., it’s not because they are slow and lazy, they probably had many down routes that day. On the day of the earthquake here, our office alone was down 27 routes without a body on them. I am still mindblown that we pulled that off and every route got delivered.

Much of the American people take for granted the service we provide and what services we offer. I guess if you went to renew your driver’s license and then had to go back and stand in line again 2 weeks later to pick it up it wouldn’t be a big deal for you, would it? If you registered a newly acquired car at the DMV and had to return and stand in line again to pick up the title, again, no big deal, right? Yes, you can renew your vehicle registration online, but, who delivers that sticker to you? Maybe you live in a rural a location and now every 2 weeks you have to drive 30 miles to pick up your medication that used to get delivered right to your mailbox.

1639: The first post office is designated in the 13 colonies in a tavern in Boston Massachusetts. (I’m wondering if Cheers producers thought of this when Cliff the mailman was added to the cast.)
1753: Benjamin Franklin creates efficient postal routes between the 13 colonies.
1775: Benjamin Franklin is appointed as the first postmaster General.
1776: The declaration of independence is signed. At this time, there were already 75 post offices in the colonies.
1792: The ‘post department’ is formed by our government. It was later changed to the U.S.Postal Service in 1971.
1792: Charge for theft of mail = death penalty.
1830: Most violations regarding obstruction of any kind with the U.S. mail becomes a federal crime.
1863: Cleveland, Ohio home delivery is introduced after a gentleman gets the idea from watching women and children stand in long lines in frigid temperatures at the post office waiting for a letter from a loved one fighting in the civil war.
1923: All residential dwellings are required to have a mailbox or mailslot at their home.
From the early 1800s up until the LB Johnson administration in the late 60s, some postal employees carried sidearms as it was part of their job duties to protect the mail at all costs.
1958: The ‘hope’ diamond was donated to the Smithsonian institution. The donation was sent through the mail. Yes, he shipped it through the mail. The cost at the time for postage was $2.44. He additionally paid $142.05 to insure it for 1 million dollars. The Smithsonian institution still has this package in their archives.
The U.S. Postal Service today: Daily…
485 million pieces of mail processed daily.
121,000 change of address forms processed daily.
4,000 addresses added to our system daily.
159 million delivery points daily.
276,000 money orders produced daily. (The money order was created by the postal service to lower mail theft from people sending cash.)
Annually: 1.4 billion miles traveled by our carriers to deliver the mail.
6.8 million passports are processed.
47% of the entire world’s mail is handled by USPS.
We deliver more in 1 day then FedEx does in 1 year.
We deliver more in 1 week then UPS does in 1 year.
Military post offices are currently in 76 foreign countries, including 283 post offices on U.S. naval ships around the world.

I agree with you that what is happening economically right now in our country is very scary. 3.4 million Americans filed for unemployment benefits last week. We are all so uncertain of our future. This also includes the future of the U.S. Postal Service. I included all of these numbers to sum up what could happen. If you took the U.S. mailing industry as a whole, not just the post office, but every involved company in the industry from the printing companies to the manufacturing companies of mailing supplies, all of it as a whole industry… If the post office closed its doors tomorrow, it would devastate a 1.4 trillion dollar a year industry in our country and essentially place 7.5 million Americans out of work. That’s 5% of the country’s tax-paying workforce.

I’m adding this here for those who aren’t aware: Congress passed a bill requiring the post office to fund benefits 75 years into the future. So, we are required to put money in a fund for future employees who haven’t even been born yet. Look it up. We are the only entity required to do this.

You see, your mail carrier…they’re the front-line. However, the mass amount of employees behind the scenes outnumber the carriers. Clerks, mailhandlers, machine operators, truck drivers, custodians, maintenance personnel and the list goes on and it takes every one of us to pull it off. We operate 24 hours a day, 7 days a week, 365 days a year.

So maybe you can do without the U.S Postal Service in your own little world. However, I don’t think this country as a whole could.

I mailed a few items and a small package over the weekend. Not because I had to, because I wanted to. When was the last time you mailed a card to your mom? Or sent a postcard to a friend when you were on vacation? I am 1 person and cannot change it all. However, if every person changed their habits slightly, we could move mountains. The numbers are simple. If every tax-paying American spent an additional $20/year on postal services, we as a whole industry would continue to be a vital part of this country’s movement.

This picture was from a few years ago. When I put my uniform on each morning, I know the task at hand. I’m proud to wear it, and proud of my job. I help provide a service to my fellow Americans in this great country we live in.
Thank you for reading and take from this what you choose. The next time you utilize services provided by the U.S. Postal Service, you are supporting an American entity that’s roots are older then our organized government and our organized military both. I hope we will survive for the sake of America. And now you’ve looked past the cover of the book.”

This story was submitted to Love What Matters by Roger Peck, and originally appeared here. Submit your own story here and be sure to subscribe to our free email newsletter for our best stories, and YouTube for our best videos.

‘I put down my window. She handed me a bag and said, ‘We want to thank you for what you’re doing. You and all truckers working hard to keep our supply lines open.’: Truck driver ‘touched’ by stranger’s act of kindness during pandemic