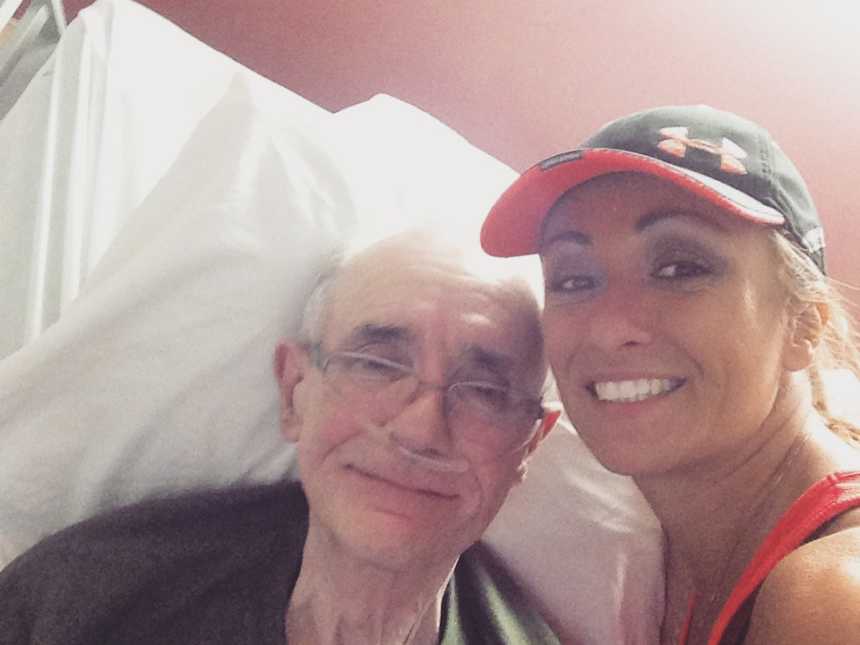 “I am a fatherless daughter. For seven long years I watched my heroic father suffer and scream in pain. Cancer stole bits and pieces of my father nonstop for seven tortuous years. Despite the fact that my father was surviving on a peg tube unable to eat or drink orally, enduring endless pain, I begged God not to take him because I simply could not imagine life without my father.

I watched my parent’s fairy tale marriage evolve into never-ending hospital visits. The flowers that my father would bring home just because became a faded memory. The love notes my father used to leave around the home for my mother were replaced by his shaky penmanship notes reminding him to take his never-ending list of medications.

Our family spent seven years searching for a cure for my father, begging God for mercy. And then, just like that my father was gone. When I lost my father I lost a big part of myself, my identity.

The days following my father’s death, were spent in my “bereavement bunker”, my safe zone. When my father took his last breath, I lost my voice. I could not speak to anyone and leaving the house was exhausting. I have a confession…I didn’t wash my hair for the first five days following my father’s death, I was exhausted. I was certain I was thrown into my own personal hell the moment my father died. My pain was gut wrenching and never-ending.

There were moments; there still are moments that I am positive the sounds of my breaking heart are deafening to anyone around me.

My father just wasn’t my father, he was my friend, my best friend. I will miss that bond for the rest of my life. See, I didn’t just speak to my father once in a blue moon, we spoke daily, sometimes multiple times a day right up until he took his last breath. Each day without my father is an adjustment, and as more time passes it is a cruel reminder of the massive void in my life. I still have moments when I retreat into my bereavement bunker because it feels as if the world cannot handle my grief.

Friendships, and even some family relations, are not immune to grief. Despite what you may think, what television leads you to believe, some people will vanish when you need them the most. Some people will say hurtful things at the most inappropriate times, even going as far as telling a new widow to “get over it”. Many have no clue what to say or how to act. Others are extremely uncomfortable around someone drowning in grief. Some are petrified of how your grief makes them feel. Some people are harboring their own guilt and resentment and simply cannot handle the depth of your grief. Grief has a unique way of forcing you to do a friend and family purge, forcing you to retreat to your bereavement bunker.

We get uncomfortable being in the presence of a woman who has lost her child, especially if you have your own little ones that you can’t imagine being without for even two seconds. Or the new widow. It’s terrifying to think of life without your partner. Simply put, it’s difficult to know what to say to a person who has experienced a traumatic loss.

Unfortunately we all experience loss at some point in our lives, it’s inevitable.

Your grieving friends and family need you now more than ever. Time will lessen the sting, but for the griever the moment their loved one died they were handed a life sentence without parole. Grievers wake up each morning and pray that something, someone will give us a glimmer of hope to get through the day.

Reach out and touch your grieving friends in any way you can. Now is the time to shower them with unconditional love, their hearts are shattered. I promise you, your grieving friends will never forget the ones that were their light, their glimmer of hope as they sat isolated in their bereavement bunker.”

This story was submitted to Love What Matters by Lisa Ingrassia. It originally appeared here.  To submit your story, click here. For our best love stories, subscribe to our free email newsletter.