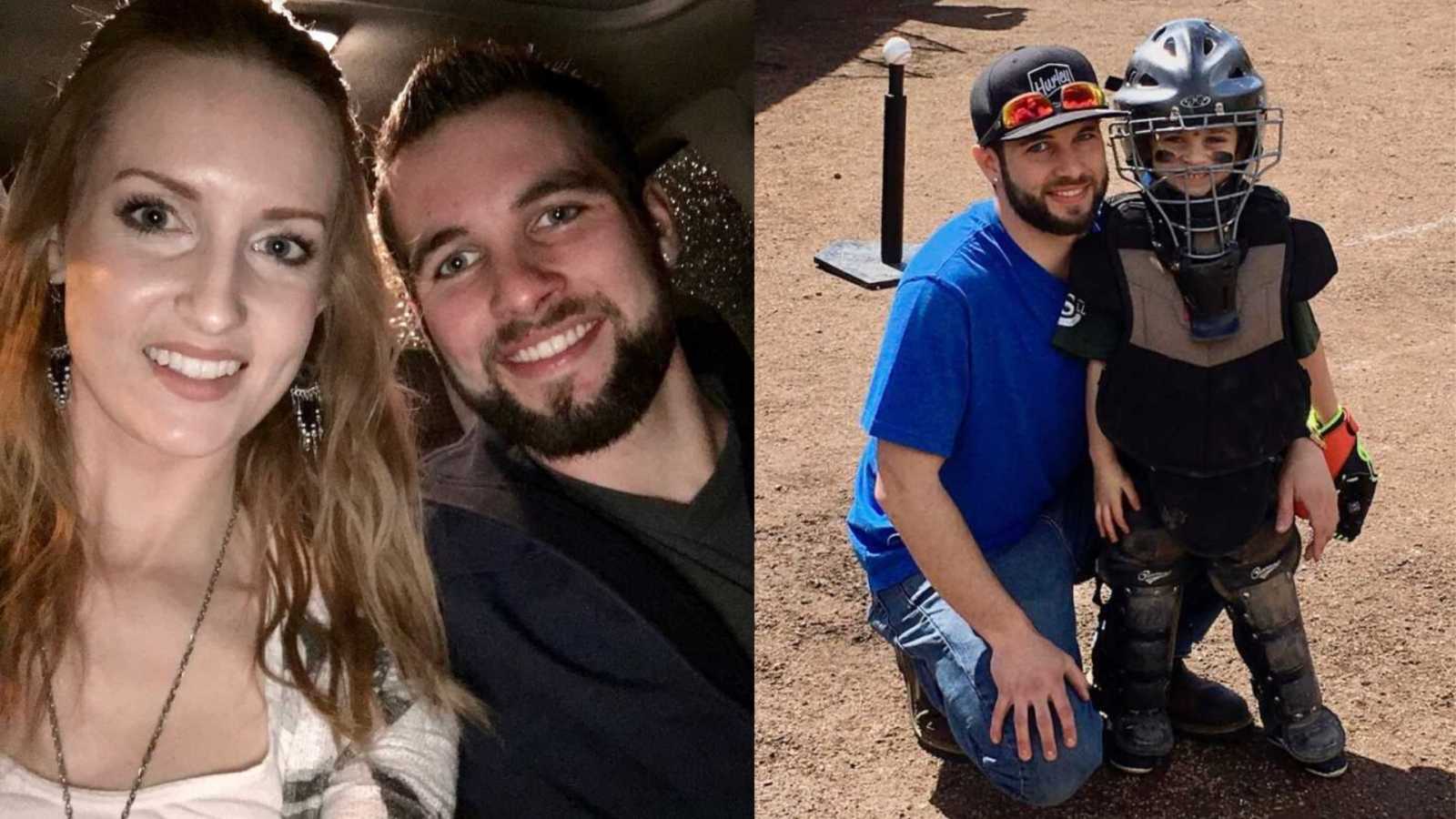 “I met Jon when I was 13 years old. He was always the guy I ran back to after a heartbreak, my first love, my best friend. We had a connection that was hard to explain because it ran so deep.

At 19, we got back together for the final time. He was down on his luck addicted to pills, and I had just graduated cosmetology school but knew I didn’t want to spend my life doing hair. I thought I could save him, but it wasn’t long before I followed his path. I refuse to blame him though, because looking back my addictive tendencies had been hiding inside me all along, I had just awoken it with Percocet. It took one and I was hooked. They say it’s easier to pull someone off a wagon than it is to pull them on to it, and it’s true. I didn’t realize I was addicted until it was far too late.

At 21 I got pregnant with our first child, and I finally felt like we would get on the right track, but it didn’t last. When our son was only 7 months old, we stumbled upon heroin. Again, I refused to see the danger until I was full blown addicted. I was disgusted with myself. Luckily, we lived with Jon’s amazing parents who helped with our son, and by the grace of god we never lost custody.

We spent the next few years going between getting clean and relapsing, before finally Jon got arrested and in to drug court. He graduated a program that something like only 1/5 participants graduate from. While he was there, I did two months in an inpatient center. We were both clean, happy, and felt like we had the rest of our lives ahead of us, we were so hopeful, but it didn’t last. I could write a book with all the things that happened in those years, but for the sake of time I have to condense the story.

Eventually, I got pregnant with our baby girl when our son was 4. Ryder was so excited to be a big brother, and we were thrilled to have a daughter. But slowly Jon started to slip in to addiction, the pressure of another child weighed so heavily on him. I caught him many many times and begged him to get back on track for our kids, and he’d promise to be good, but inevitably it would only be a week or two before I’d catch him again. I’d cover for him and lie to our families, pretending all was perfect. I was a full-time student and buried my head in school work and baby preparations to distract from the seriousness of the situation.

Finally, I gave birth to Iyla on February 13th, 2018. For the first month of her life Jon was so in love with her, and his behavior showed it, he was actually amazing. That’s who he was when he wasn’t using. He was one of the kindest most loving men when he was clean, his heart was huge. But like all the other times, it didn’t last. I was so preoccupied with our daughter that I didn’t notice how bad he had actually gotten. I remember crying to him one time telling him something bad was going to happen, begging him to picture our sons face when he hears he’ll never see Daddy again. I never imagined how soon that would happen.

On the night of May 19, 2018, we got in a big fight. I went outside to check on him and he yelled ‘What Lauren?!?’ So, I just closed the door, held my baby, and prayed for something to change. About 45 minutes later I went outside, 3-month-old in my arms, and found Jon passed out in the driveway. I’d found him like this many times before, so I ran my daughter inside and came back out to try to help him in the house. When the foil with black lines fell out of his hand, I knew I needed to call 911.

My son heard me screaming and came outside and was asking me what was wrong with Daddy. I hurried him back inside and began CPR. We lived at my grandmas in an area that’s hard to find so she tried to instruct them to our house while I did CPR, screamed, begging for him to wake up. I knew in my heart he was gone but I wouldn’t give up hope, I just kept working on him. I could hear the ambulances in the neighborhood, but they were at the wrong side. It took them what felt like forever to get there.

When they finally arrived, I went inside to get my baby, I was covered in puke, knees scraped from the driveway. It felt like a dream. By the grace of god my son had fallen asleep, so he didn’t have to see that. For 45 minutes I walked around holding my baby to my chest and just praying for a miracle. I couldn’t even cry I was in such a deep shock. Finally, a man came in and said he was sorry, they did everything they could, but it just wasn’t enough.

I almost fell to the floor. They wanted to ask me questions, but I really didn’t have answers. All I could hear was the sound of all the cops and EMT’s talking outside, zipping his body up, putting him on the gurney. I blamed myself; if I had just gone outside a few minutes earlier I could have saved him. If I had seen the signs that he was high I could have stopped him somehow. It didn’t feel permanent, it just felt like he was going away for a while. My breast milk dried up and I started smoking cigarettes again that night. They had to be his brand to remind me of him. I stayed up all night dreading the moment that my son, who loved and admired his dad so much, would wake up and I would have to tell him the truth. I was living in my worst nightmare.

Telling my son was the hardest thing I’d ever done. He asked if God could give his Daddy back. He was confused. He asked some questions that I tried to answer as honestly as I could, but it took a few weeks for it to really set in for him that Daddy wasn’t coming back. I tried hard to keep it together for him, but most days he spent with his grandpa, or his aunt, or my mom. All I could do was stare at the wall and cry and sleep with my baby. When she would wake, I would pass her off to my mom or grandma so I could stay in bed. Sleeping was the only time it didn’t hurt. The only comfort I had was trust in God that he had a plan.

My guilt was tremendous, I ran over different scenarios in my head of how I could have somehow saved him. That was almost a year ago now, and I have peace knowing Jon is in heaven with the God he so deeply loved. Our son cries sometimes, and other times he is very matter of fact about it, but his teachers and counselor always assure me that he is well adjusted. In spite of his tremendous loss he is thriving. I never imagined my daughter would call another man ‘DaDa’ and it breaks my heart that her blood father isn’t here to see how much she looks like him.

Every day I think about Jon and what he could have been, but the pain and survivors’ guilt isn’t consuming me anymore. I am amazed at how much can change in a year. The man I’m with now is a great dad, and we have a great life together. He considers my kids as his own and has been patient with me on the days I am grieving my first love. I have learned that we don’t get to control the obstacles life throws at us, but we do get to control how we react to them. I will always have a hole in my heart, but I would do it all over again because I have two amazing kids that will carry the memory of their father. I am glad that I got to be the one that gave him a family, even if it means being the one that lost him. I know some day I will see him again.”

This story was submitted to Love What Matters by Lauren Pritchett, 27, of Washington. Follow her on Instagram here. Do you have a similar experience? We’d like to hear your important journey. Submit your own story here. Be sure to subscribe to our free email newsletter for our best stories, and YouTube for our best videos.

‘When our son was only 7 months old, we stumbled upon heroin. I remember begging him to picture our son’s face when he hears ‘you’ll never see Daddy again.’ I never imagined how soon that would happen.’