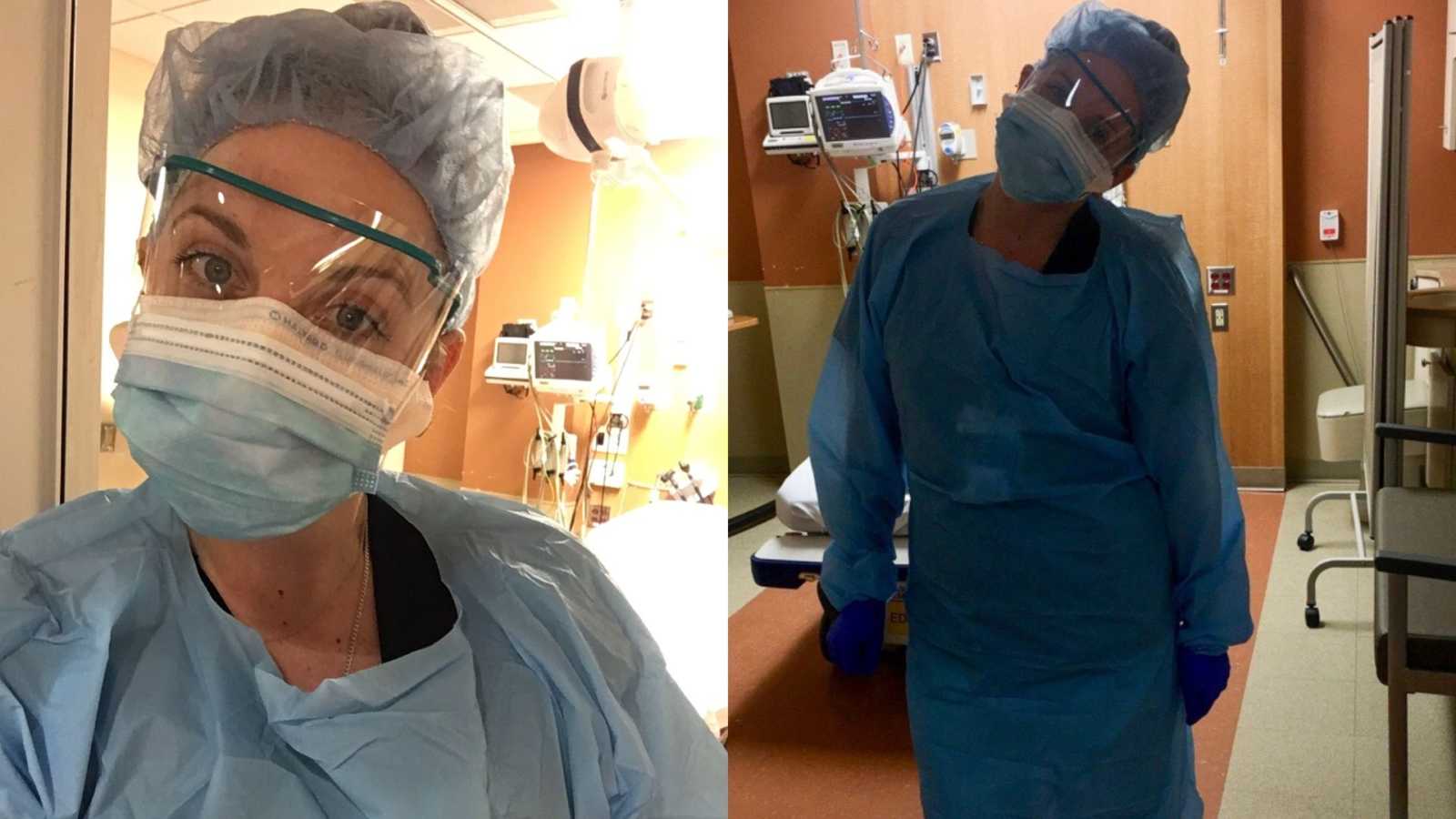 I came onto my shift at 7 PM that night, March 27th. I was splitting a zone with a colleague. During report I was told ‘don’t worry about room 302 ‘Simon’ will keep him.’ All I knew at that moment was a Covid rule out. As I began taking care of the rest of the zone my attention kept going back to the man in 302.

He was young compared to most of the other critical covid patients, but he was very sick. He was intubated, on multiple pressure drips, sedation and pain medications and still you could see his body working hard. Simon soon needed my help in the room to turn him so I went in. Two masks, a gown, gloves, goggles and a face shield. The man in the bed opened his eyes as we were turning and changing his linens, bright blue and soft eyes staring up at me. I smiled at him but he couldn’t see that through my mask.

He finally had a bed upstairs in the ICU within a couple hours of coming in. As Simon got everything together I called his wife to update her. One ring and I was greeted with an anxious ‘Hello?’ I introduced myself and spoke to the wife about her husbands condition, she thanked me. I could hear the uncertainty in her voice so I tried to reassure her that her husband was in good hands. She told me about the man in the bed, their family and how he was okay just a few days ago. After talking I asked her if there is anything I could tell him for her and she said yes, clearing her throat, ‘that his two daughters and I love him very dearly and are here for him’ as she broke into tears. I myself on the verge of losing my emotions responded, ‘I promise I will.’

I wished her well and ended the call. I went to the man in room 302 and grabbed his hand, ‘Sir, your wife called.’ His eyes shot wide open and he looked at me with as much joy as someone in his condition could. I told him his wife and daughters loved him and are rooting for him. He squeezed my hand and gave me a thumbs up. The critical care transport came and brought him to the ICU and that was the last I saw him. For the following two weeks I would check his progress notes every shift, as the days went on he was still intubated. I would skim through the doctor notes trying to look for anything that showed improvement. The first week the notes only seemed to show his condition getting worse. But the second week he started to get better. April 10th, it had now been two weeks that the man from 302 had been in the ICU. I came in and got the report for my zone and checked on his progress. EXTUBATED!

My heart filled with joy! He was finally off the vent after two weeks. I knew he still had a long recovery ahead but It was clear he was going to make it home soon. On April 17th I checked on the man from 302 and saw a discharge note. A sense of relief went over me for he had beat this nasty virus. In the ER it is our job to stabilize and get patients upstairs. We must separate ourselves from being emotional so we can get the job done. In the ER, we rarely see the outcome. So to the man from 302, you may not remember me, but I remember you. Knowing you made it home gives me hope as we continue to battle through this time. May God Bless you and your family.”

This story was submitted to Love What Matters by Amanda Kirchoff. Submit your story here.