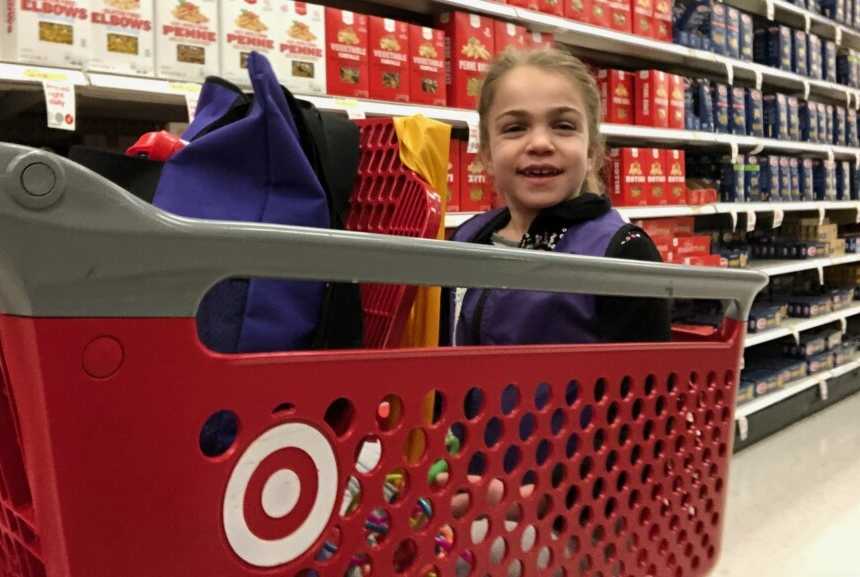 “Keira goes to Target multiple times each week. That’s right — multiple times — she loves it! When thinking of how often she’s at the store and how wonderful the employees have been to her, we decided Keira’s Halloween costume this year would be a Target employee!

Our frequent trips to Target began in 2015 when Keira was diagnosed with Sanfilippo Syndrome, a terminal disease in children. This disease led to an increase in hyperactivity and restlessness to the point that we had to get her outside of the house at least a few times a day to avoid severe meltdowns and decrease safety issues.

Target was an ideal location (especially on bad weather days) because there was so much to hold Keira’s attention. When her mobility was better, she loved to wander (or sprint!) up and down the aisles of the store. Since it’s become more of a safety issue to have her walk or run by herself in the store, we primarily put her in the cart now, where she’s happy to ride and sing while she looks at everything in the store.

We’ve always found the Target employees to be very helpful, accommodating and compassionate. Many of them in both our previous home in Charleston, West Virginia, and our current home near Charlotte, North Carolina, recognize Keira when we come in! We are also very excited that the closest Target has a Caroline’s Cart. Thank goodness for this since this has made her frequent trips to Target so much safer and made shopping easier for us all!

Watch the video of her singing her ABC’s in Target, which was filmed just over two years ago. This video is both precious and heartbreaking to us, because it’s the last one we have of her singing the alphabet clearly, since Sanfilippo has robbed her of almost all of her words now.

Since we likely only have a limited number of Halloweens left with her, we will cherish the memories of this holiday, as we try to with all holidays now. Thank you, Target!”

This story was submitted to Love What Matters by Elise Esposito, 43, of Charlotte, North Carolina. To learn more about Keira and Sanfillipo Synddrome, go to curesff.org. Submit your story here.