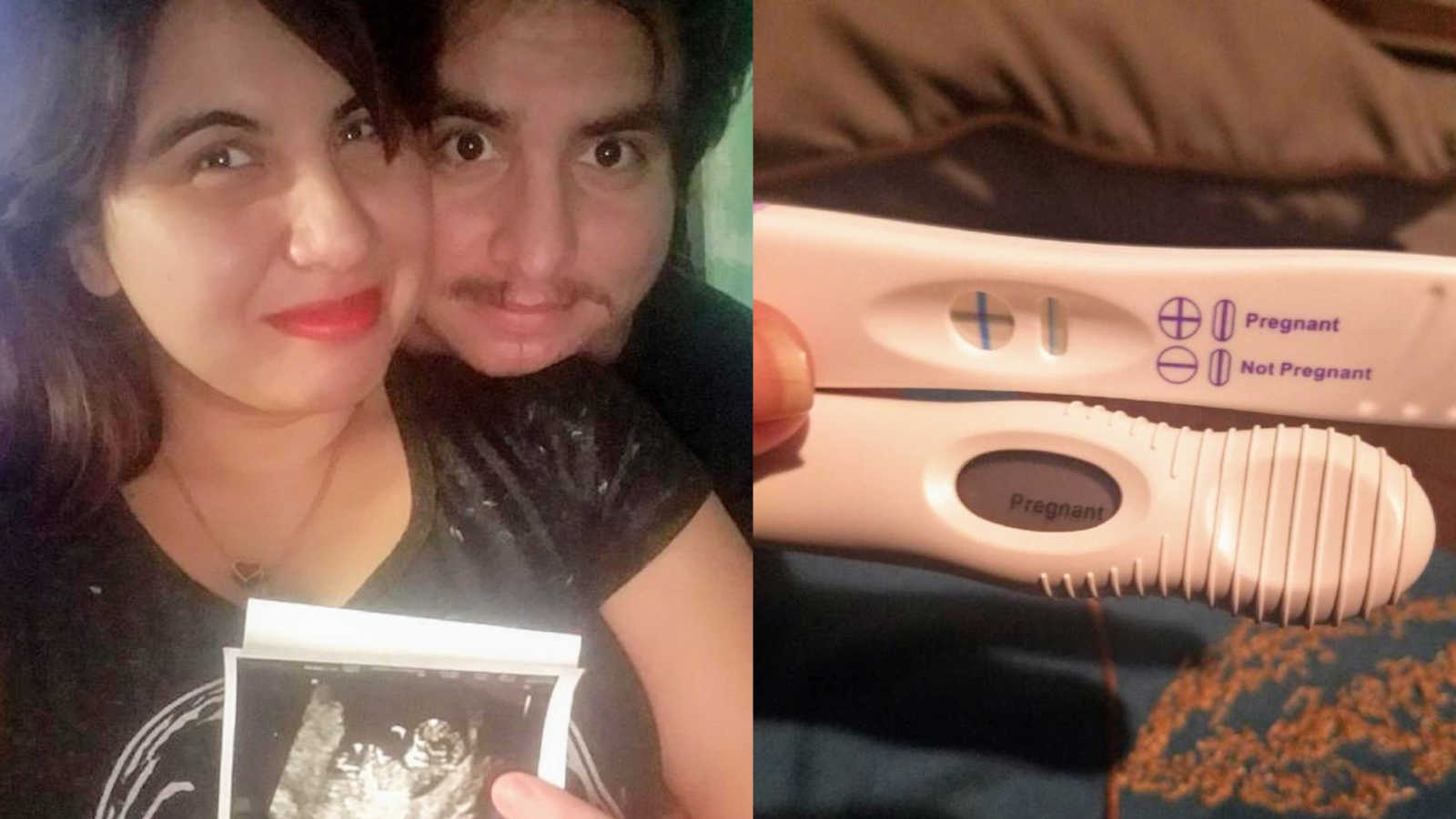 “Our story began August 2017. I had just gotten my bachelor’s in liberal arts and was planning on taking a year off before going back for my master’s. My boyfriend Art and I had been together for a year and half and were happy as can be. Up until that point I had struggled to find a good birth control because I have a hormonal imbalance that causes me to blow up like a balloon on certain contraception. So, I decided maybe the copper IUD was the best option. It had no hormones and protection for 10 years? Yes please! We were in no way ready for kids yet.

The procedure to get the IUD in was hard. I had to find a doctor who even did that, and eventually just went to Planned Parenthood. I had it put in in August, and boy did it hurt! One of the most painful things. I had the worst cramps to the point where Art told me to just get it out – it wasn’t worth it, but I refused. Eventually aside from a long period, I was okay.

That is until September 2nd… Art and I were heading to a John Williams concert and I was getting ready. As I was showering, I noticed the IUD string was longer than usual. I immediately called Planned Parenthood and made an appointment for the Monday coming up. I went in and was told everything was okay. The IUD hadn’t moved, the string was just long. This was confirmed September 28 by my gynecologist during a Pap smear. I was told the IUD was in place and the string was unusually long. We eventually forgot about it and went on with life.

It was early November when my mom was the one who noticed the change. I was running up our front two steps because I really had to use the bathroom and I commented how my breasts hurt when I ran, and my mom asked me if I thought I was pregnant. I laughed it off telling her I had the IUD and there was no way, but a seed of doubt started to bloom. That’s when I realized I hadn’t had my period for a month or two… I told Art and we went to get a pregnancy test. Usually they tell you to wait 3 minutes for the results. Well, we didn’t even wait 30 seconds before it showed positive.

We were in shock! We went to Planned Parenthood, but they couldn’t see me that day, so we went to buy a couple more tests which showed the same. We were expecting. Here’s where the bad comes in…

During my pregnancy I had the misfortune of having horrible care. It began when I went to Planned Parenthood to get a confirmation. The nurse who took my vitals asked why I was there and laughed when I said I was pregnant. She asked why I would even think that, and said there was no way. She would talk to me with such a tone and laughter in her voice. Once I told her my symptoms, she accused me of being pregnant when I got the IUD put in, and didn’t stop with her judgmental tone until she saw in my records that I had had two negative tests done right there when I went in for my IUD insertion and to get it checked. Then she saw I was pregnant and told me to wait so I could get it taken out. We waited 2 hours before we were told that no one would take it out there. They didn’t want to be responsible because taking out the IUD could make me miscarry and even bleed out. We were left in the dark.

I called my primary doctor and was sent to my gynecologist, so he could be my OBGYN. I saw him November 22nd right before Thanksgiving. I was told I needed to go get a special ultrasound but because of my medical insurance, we had to wait for the authorization. Well we waited and waited, and it wasn’t until several phone calls to my doctor and insurance that I got the authorization. Turns out the doctor’s nurse never turned it in until we kept calling to ask on the status. I finally saw the specialist December 27. A whole month after seeing my OBGYN. It was infuriating. We were on a time limit. The IUD could make me miscarry any minute, and in fact, I was having spotting by the time I got the ultrasound done.

Thankfully we found out the IUD HAD MOVED, and it was in my vaginal canal. It was an easy removal with no risk to my baby. I know it could have been worse, but those days of uncertainty were torture not knowing if I would lose my baby or not. If taking out the IUD would it make me miscarry. I was told during that time to not get attached to my baby because I may lose them.

During my prenatal care I dealt with the doctor not being in a lot of the time, no real checkup, just a measurement and were done. During my 20-week checkup he told us, ‘Wow, I didn’t think you would make it this far!’ Until then, he had never shown any concern or really told us anything.

I hated the prenatal care. I felt I was not being taken care of. I would wait 3 hours to see the doctor for 2 minutes. And sometimes he wouldn’t show. I had horrible pain during pregnancy in my pelvic area and finally I had to ask a nurse what it was, but was told it was normal. It took me going to the hospital to find out it was round ligament pain and told how to ease the pain. At 36 weeks I asked if I could find out how dilated I may be because I had been having on and off contractions, but was told the doctor doesn’t check that. I was basically in the dark most of my pregnancy.

I’m telling my story because, although I love my son, I feel my whole experience was taken from me. I don’t know how two doctors missed the IUD being moved. I hate how I couldn’t feel close to my child during the first few months because I was scared I may lose him. I hate how that impacted me during the whole pregnancy with me feeling I would never bond with him. I hate how I couldn’t tell anyone because I was scared it would jinx it. Then I hate how I felt I wasn’t taken care of during my pregnancy or given the proper information. A lot of things I had to Google – as bad as they say that is, I felt that is all I had. I wish I could have changed doctors but with the problem of the IUD I knew doing so would delay things even more. Like I said, I love my son and he is the biggest blessing, but for my second child, I do plan to check on the doctor I get and which hospital I go to. Stay tuned for part 2 of how my delivery went. If there was one thing I would change it’s just the doctor I had. Never ever would I change having my son.”

This story was submitted to Love What Matters by Laura Mendez, 27, of Los Angeles, California. Submit your story here, and be sure to subscribe to our best love stories here.