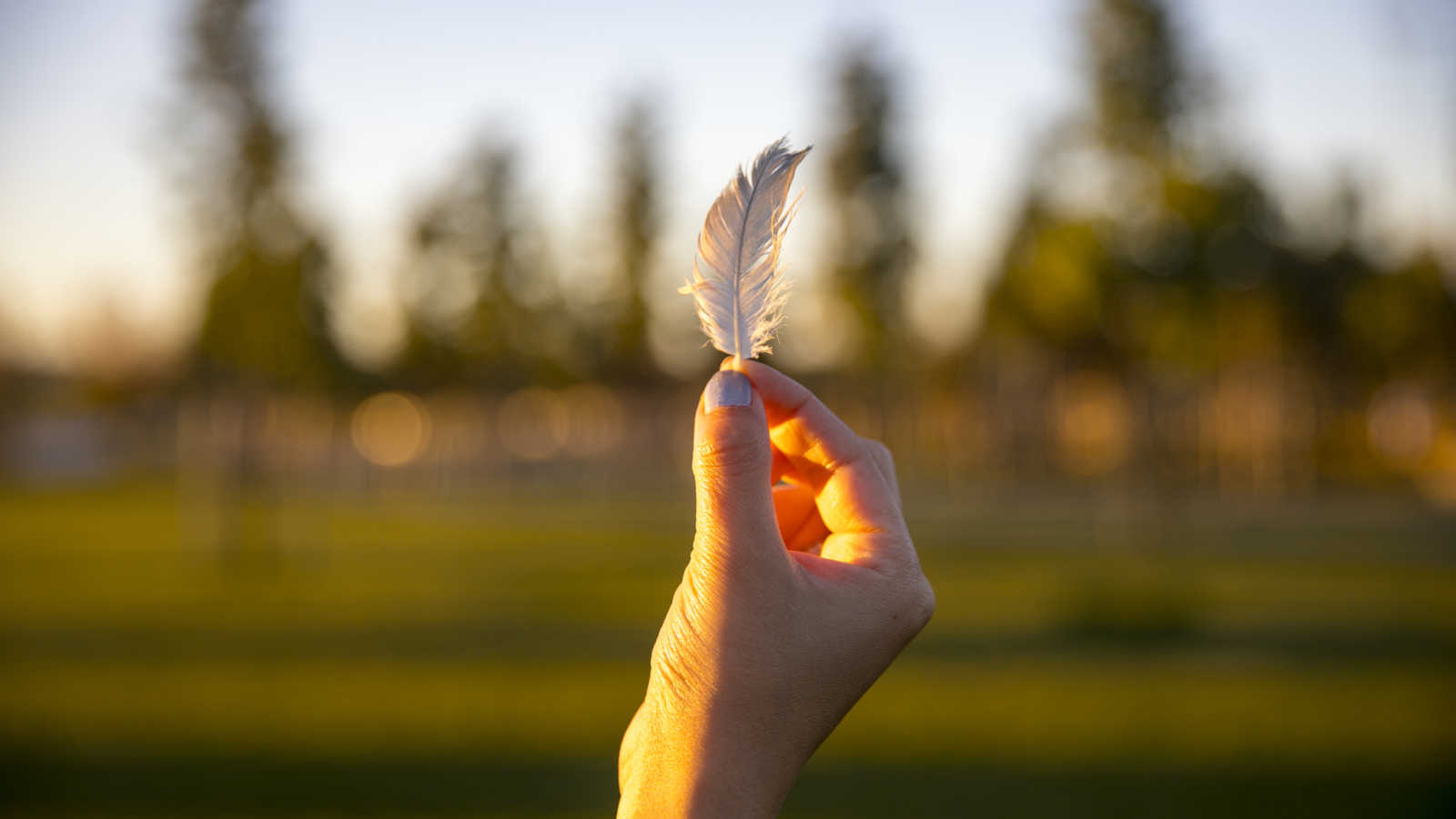 “The first thing I noticed was the feather.

He held it firmly in his fingers, and I watched as he traced the tip along the wall edges. Up, across, over, a pattern and a rhythm understood only by him.

It was a Friday afternoon in Target, and the din of people talking, machines warming food humming behind the counter, and the less-than-friendly overhead lights were all difficult to drown out. I kept my eyes downcast, focused on the breadsticks that I was eating, dipping them into the tiny cup of marinara sauce like a brush in paint, watching the crisp brown turn red.

I have not needed a feather of my own in many years. I knew why he did.

The woman with him—a sister, perhaps, or caretaker, I couldn’t be sure—spoke to him in that peculiar way. Autism-speak. The pitch of her voice just a shade unnaturally high, as if talking to a child instead of a 15-year-old boy.

‘Can you come over here, Oliver?’

I felt her teetering perilously on the tightrope-thin hope that he would listen, be good, be still. But it’s hard to keep still when you know you make people uneasy just by existing in an autistic body.

Her praise for him came shortly after: ‘Good job listening!’

After a moment’s pause, Oliver kept moving, pacing around the cramped food court in slow, steady steps. The woman stood at the counter with a shopping cart, placing their order while keeping her gaze fixed on him. A myriad of emotions swirled through me as I tried not to stand up and shout solidarity at the top of my lungs. Instead, I kept quiet, carefully eyeing them both.

And then he stopped. Right behind my chair.

He hovered in what other people might consider uncomfortably close proximity. The feather was still clutched in his grasp, that source of comfort kept so close by. Flashes of the hair scrunchie I had always worn on my wrist came to mind, along with the memory of nearly clawing at my skin to escape the world around me, muted only by the soothing sensation of the fabric.

The woman with him didn’t know that, though. She was looking in our direction, mild panic creasing over her face as Oliver continued to stand behind me. Her shoulders tensed like I know my mother’s must have when I was a child and we were out in public. I could sense what would come next, could feel the word before she ever uttered it. She looked right at me, teeth pressed together tightly in an impossibly white row:

‘Sorry…’ she said, the apologetic twinge in her voice cutting like a knife in my stomach.

A stream-of-consciousness set of responses whirled through my mind:

I shook my head, pushing away the tears threatening to appear at the corner of my eyes, and waved a hand dismissively. I answered her, my voice quavering slightly:

Behind me, Oliver continued what he was doing, and I fought the urge to hug him.

The woman alternately glanced between the counter and Oliver, still uncertain. As I ate the last few bites of my breadsticks, I realized I had to say something.

I walked over to her, half under the pretense of throwing out the breadstick box in the garbage behind her, and took a deep breath.

Cautious optimism colored her cheeks, along with a hint of surprise. She turned to face me, her demeanor almost relaxed compared to how tense it had been moments earlier.

‘Yes. Yes, he is,’ she replied, confirming what I had known all along.

Without hesitation, I responded:

We quickly fell to talking, and I learned that she worked at an autism school nearby, where Oliver was a student. I told her of my work as an international speaker and autism advocate, and how I knew all-too-well what Oliver was going through, having been on that path myself many years ago.

It was a moment that none of us could have expected, our paths crossing in Target on a Friday afternoon. The relief on her face was drawn in shapes; round cheekbones that rose instead of sank, and lines on her forehead that had stopped creasing even just briefly. Happiness and wistful sadness filled me in combined measure, wishing that my family could have felt that relief when I was Oliver’s age. How it would have meant the world to encounter a stranger in public who didn’t stare, didn’t whisper, point, or disdainfully glance in our direction. How it would have given us all such comfort to know that we weren’t alone in walking this strange, unpredictable, incredible journey of autism.

For me, those years are long past, but for Oliver and so many others like him, and for their loved ones and caregivers, these moments are present and alive. As we move into the start of a new year, I am thinking of all the Olivers out there, the autistic individuals and families looking for promise and hope in the days ahead. As an international speaker, advocate, and someone who has been where you are: I see you. I understand, and I am here to help.

You are not alone.”

This story was submitted to Love What Matters by Amy Gravino. Submit your own story here, and subscribe to our best stories in our free newsletter here.