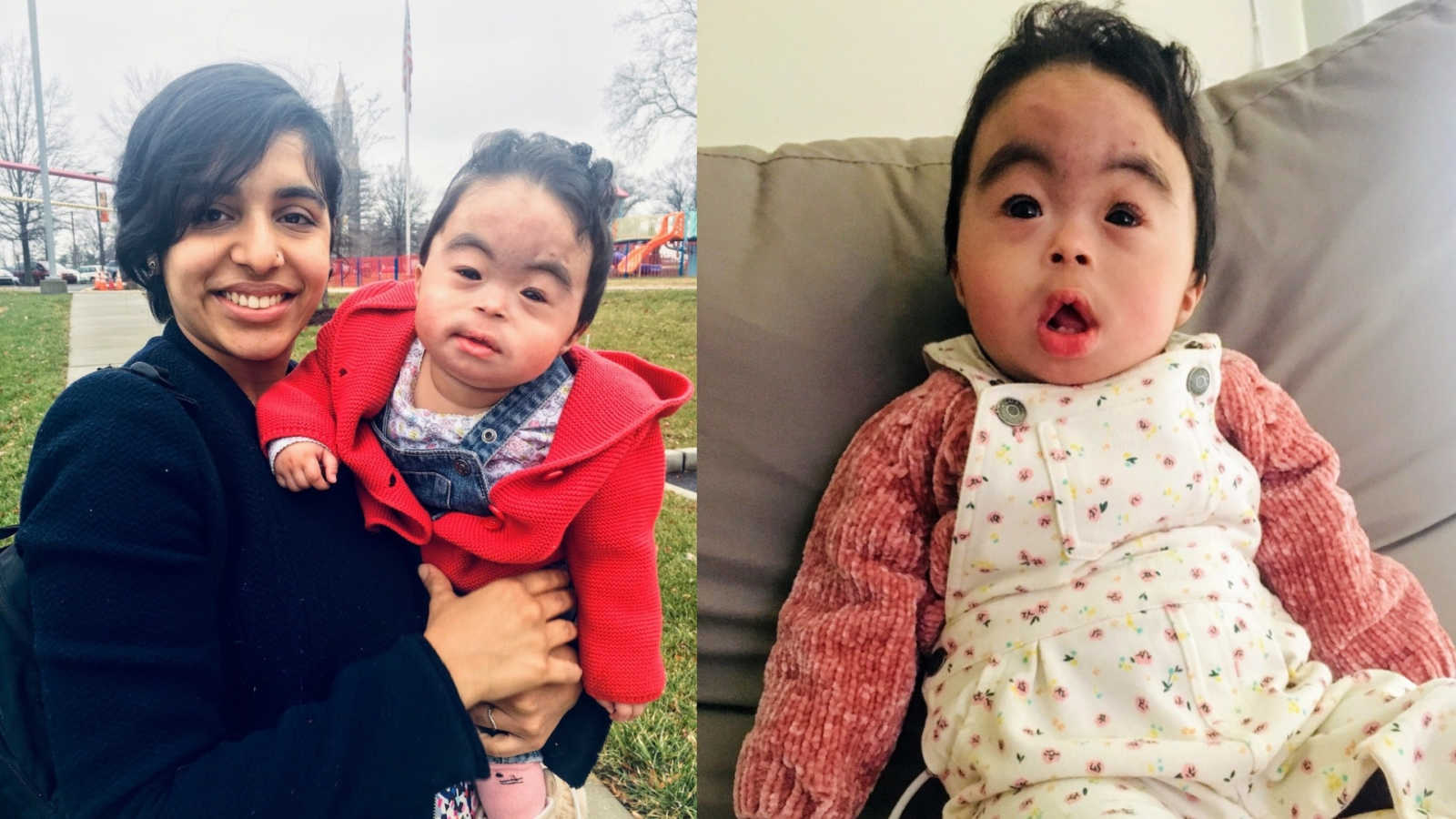 “December 2nd, 2017, the day my life changed forever. My baby girl was finally here with me. I should have been high on endorphins and deliriously happy, but unfortunately, there was doubt, fear, anxiety and my ‘new mom’ high was stolen from me. Amelia came in to this world with a short, extremely weak cry and bearing unexpected news that sent my family and me spiraling into the unknown world of a life with a medically complex child.

My pregnancy with Amelia was after a pregnancy loss at 11 weeks. So, besides the anxiety that comes with a rainbow baby, the pregnancy was uneventful, textbook and every mothers dream – EASY! I delivered her at a birthing center and even labor and delivery was pretty uncomplicated. She came out, nice and red, but weak and tiny, even though she was full term. Well, as first-time parents, we didn’t suspect anything was wrong. We spent a blissful couple of hours snuggling our new baby girl. Besides her inability to latch, nothing else seemed concerning. But, once the pediatrician came in to take a look at her, things weren’t so hunky dory anymore. The doctor, after a thorough examination, calmly told us that Amelia probably has a ‘genetic condition’. Words like ‘cleft palate’, ‘feeding trouble’, ‘hypothermia’, ‘hypoglycemia’, ‘low tone’, ‘Down syndrome or something’ were thrown at us.

FEAR was the only emotion I felt in that moment. I felt like I was slapped in the face and all the excitement was sucked out of me. How was it possible, that something so small and perfect could have such an unexplainably devastating effect on me! After the initial shock, it was numbness that took over. It was as if my body had left me. All I felt while I cleaned up and got ready to move Amelia to the NICU, at the hospital across the street, was this sensation of floating through space; an emptiness. I briefly remember, watching Amelia’s face and stroking it, and struggling to find my emotions. The face I longed to see was finally in front of me, and I didn’t feel ANYTHING. It was scary. Once Amelia was in the NICU and I knew she had the medical attention she needed, I realized my unconditional love for her was way more than I could have ever imagined. A mother’s love will never be a cliché. It’s the most beautiful thing I have ever known. Ever since that day, began our relationship with the medical world. I became a ‘medical momma’.

Amelia was later diagnosed with a rare chromosomal disorder, 9p minus syndrome, and thereafter we continued to get other diagnoses at a steady rate. It seemed unending. Beeps, alarms, tubes, probes, pokes, tests, medical equipment – these, became our new normal. The NICU life was a baptism of sorts in to the life of a child with special needs; into Amelia’s life.

Four months later, on April 10th, 2018, was Amelia’s first ever surgery. She was getting a feeding tube that went straight to her stomach (Gastronomy tube). I was nervous to say the least, but also completely convinced of the need to get it done.

Surgery went as planned and she was in recovery. My 4-month old girl had come out on the other side of a surgery and was doing ok, or so we thought. We were told she was good to go home, so we brought her home. She wasn’t back to being herself, but we were told this was expected and not worrisome. So, the night she came home, we were feeding her through her tube and she just looked extremely uncomfortable. It just seemed like she was struggling to breathe, and her belly didn’t feel right, and apparently this was all typical behavior right after surgery. So, we pushed through these signs and just waited for her to get through it.

It was about 3 a.m. and her feed had just completed. My husband was holding her upright in his arms and I was seated by him on the floor. Both of us watched her like hawks, because she just seemed so distressed. We were trying to console her, when suddenly she started heaving and breathing extremely heavily. It was as if she wanted to throw up, but just wasn’t able to. And then I noticed she was losing color. ‘Something’s happening’, I screamed! ‘She’s going blue. I don’t think she’s breathing!’ My heart was racing. ‘Is she choking? Flip her around. Do something’, I desperately said. My husband turned her upside down and thrusted her back, in an attempt to help her, while I watched her face in absolute horror. SHE WAS NOT BREATHING. ‘No, no, no, no! Amelia, breathe!’ She wasn’t just blue, she was lifeless. ‘Start CPR, I’m calling 911’, I told my husband as I ran to get to my phone.

‘My 4-month old baby girl is not breathing; she’s not responsive at all. You need to send HELP, now!’ Words I still don’t believe I actually said; all this while watching my husband work through breaths and compressions on my little girl, who lay on the floor, grey and lifeless. I was instructed that the medics were on their way. But it just didn’t seem soon enough.

‘They need to come sooner, please!,’ I begged the stranger on the line. How long was it? Seconds… minutes… an eternity – the hardest moments of my life so far. I thought we lost her. How could it be?! And just like that, during the second round of CPR, her fingers tingled; she moved ever so slightly and then she took a breath. Before the paramedics got there, Amelia was breathing and responsive again.

That day, April 11, 2017, gave me the most horrific memories of my life, but it also taught me some extremely important lessons. I learned that we have to take every day as it comes and believe that beyond every hardship, is victory and utter bliss.

I learned to cherish every small milestone, every little accomplishment. Small things bring tremendous joy. Every day I learn to love more, to appreciate more, to be more patient, to trust more, to be kind and to accept and surrender. There is only so much one can control in life. Amelia is my biggest teacher. In her mere 13 months of life, she has had 3 surgeries and numerous medical appointments, but she is so resilient and always comes back full of life and spirit.

Her developmental delays do not hold her back from living life to the fullest and being a constant source of light and life. That beautiful soul touches the hearts of people everywhere, people she hasn’t even met. Watching her fight her daily battles and yet smile through them, makes her such an inspiration.

She’s the epitome of strength. From her, I learn to find courage in the lowest moments, to hold on to hope, when it’s dark. Her effect on people is irrevocable and unexplainable. In one syllable alone, she can pass on so much joy. She inspires me to love and love triumphs all.”

This story was submitted to Love What Matters by Tresa Joseph of Wayne, Pennsylvania. Follow her on Instagram here. Do you have a similar experience? We’d love to hear your journey. Submit your story here, and subscribe to our best love stories here.