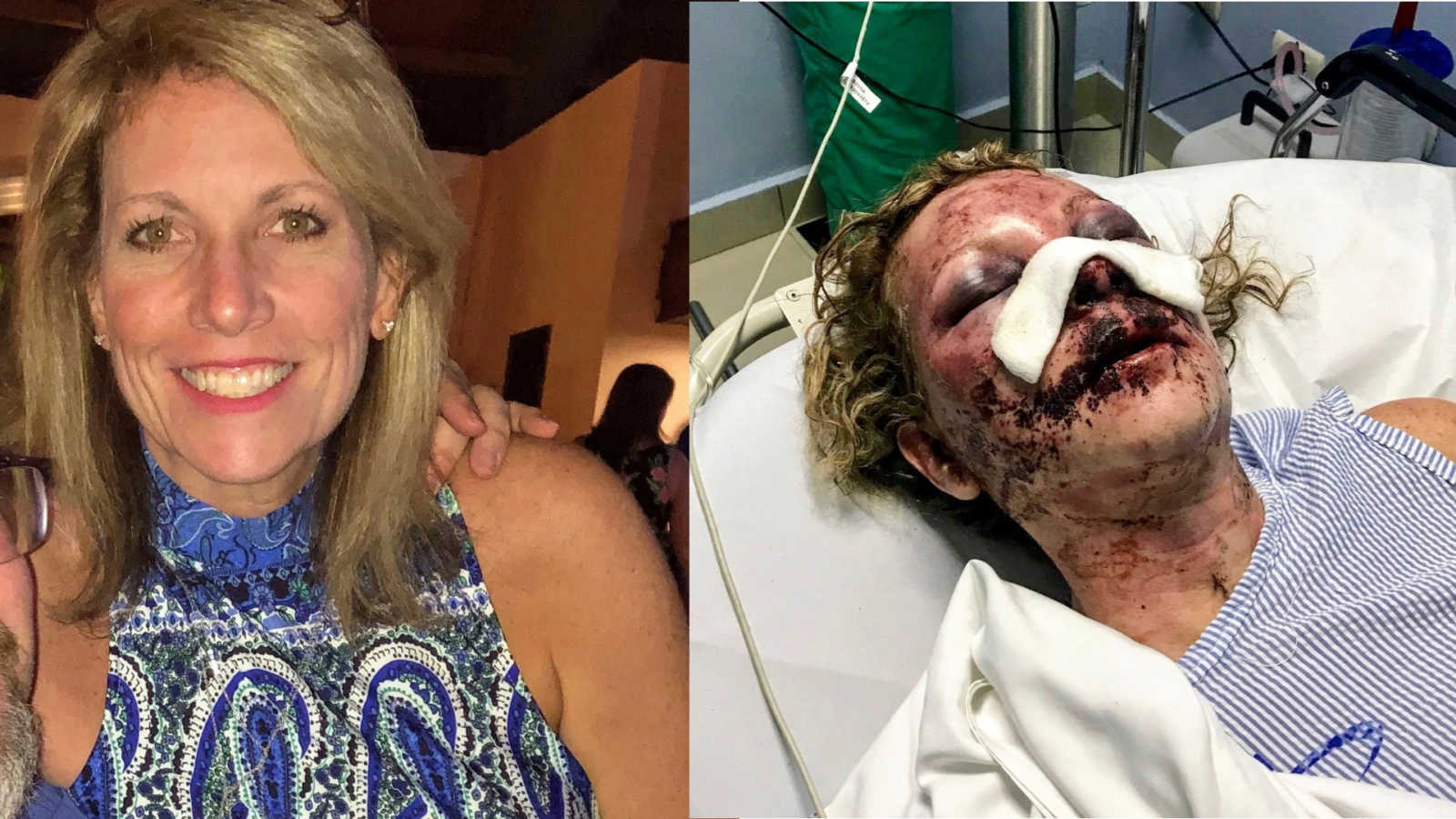 “How do you explain to your kids you were almost killed by some random stranger and that ‘Mommy is coming home, but I don’t look like myself’? How do you look into your parents’ eyes as they gaze upon your battered face telling them, ‘I’m okay, I’ll be okay’. Seeing friends break down in tears as they look at you. Everyone asking, ‘why?’, ‘how?’ You tell them a story. You recount every detail very matter of fact so that you don’t break down, that you stay strong… so they don’t see how you are crumbling inside with fear, disappointment, and weakness.

Now that I’ve had some time to heal, it’s time to tell my story, in the hopes that women will be more aware, and hopefully prevent what happened to me. I also want people to understand that the resorts will claim NO liability or responsibility and you will have no recourse for any reimbursement of expenses.

I went on vacation at the end of January with my husband and our best friends, Diane and James. We went to an all-inclusive resort, Majestic Elegance, in the Dominican Republic. We arrived on a Monday night. After checking out the resort, we went to bed relatively early (10ish), because let’s face it… it was a long day and we aren’t so young anymore! Tuesday brought sunshine and beach-time! That night we met up with our friends for the theatre show. It was all about 80’s music… right up our alley.

The show ended somewhere around 10:30 p.m. and we went back to our rooms. I had worked up an appetite dancing so I called down to room service. I received a ‘busy’ message, so I tried calling again. At that time, I got a message that they were no longer serving (I can’t remember the exact message). I told my husband I was going to run downstairs to the lounge in our building for a snack and I’d be back in 5 minutes. I ended up bypassing the lounge in our building and opted to go to the lounge in the next building. which was on the beach. I thought I could get some pictures of the moon on the water, but I never made it to the beach.

As I went through the rotunda between buildings, I noticed there wasn’t anyone in the hallway. Not majorly odd, but still eerily quiet. I took about 10 or so steps just swinging my wristlet back and forth, not a care in the world. That’s when I heard it. Heavy footsteps… one, two, three, four, then they sped up, and then before I could react, I was plowed into from behind and immediately immobilized. His arms wrapped around me and he started pulling me immediately into an unlocked maintenance room…

I’m not going to go into the gory details of everything, however, please know that I fought with everything I had at that moment. He was too strong. The next 8 hours brought me pain and fear. I was strangled multiple times to unconsciousness. My lifeless body was drug down concrete stairs to an underground waste water area. I was kicked in the head; I was beaten with a club. And then strangled again for the kill; at which time he disposed of my body into an area I refer to as the ‘hole’. I was unconscious multiple times during this savage attack, so I have no idea what else was done to me during that time. Somehow, I survived. Again, I won’t go into all of the hell that I went through being basically ‘buried’ in that hell hole for so many hours.

I spent 5 days in the medical clinic (an offsite hospital) and had surgery to repair my injuries. I am still dealing with several issues, including nerve damage, as well as, all of the medical expenses since being home. Majestic Elegance claims no responsibility for the attack since I couldn’t identify the attacker (even though he was wearing a uniform WITH the resort logo and hit me directly in front of the unlocked maintenance room and dragged me down concrete stairs to a basement so that no one could hear or find me.) Police did find evidence of the blood smeared mop handle and a maintenance hat in the area I was found, but this means nothing in these countries.

There are no cameras, no bright lighting, etc. My husband and friends went to the front desk at least 3 times throughout the night before security even agreed to look for me. This consisted of them taking a quad to the beach and looking on the beach. The security at Majestic Elegance thought I was drunk somewhere. I went missing at 10:30 and was found over 8 hrs. later. It was hell.

This man thought he killed me, but he failed. He is still out there, a predator, waiting for his next victim. Only the next woman may not be so fortunate. Please, please do not walk alone. These attacks are happening too frequently, and the criminals are NOT being prosecuted even though evidence is found. Victims are not being compensated for medical or pain and suffering, and the resorts are not held liable. Majestic Elegance didn’t offer to reimburse us for our vacation, let alone my current medical bills. Litigation went nowhere. Stories are being squashed.

The pictures are from prior to the attack and after they cleaned me up at the hospital. My story… please no negative comments, this is my truth as I lived it.”

This story was written by Tammy Lawrence-Daley of Wilmington, Delaware. Submit your story here, and be sure to subscribe to our best love stories here.

‘I was lost at 4 a.m. I needed help and this man assured me he could help me get home. In a puddle of my own blood, he left me in the dark.’

‘He claimed he was going to leave his mark on me for my next boyfriend. I had a scar wrapping from cheek to cheek, now known as the ‘girl that had her lip bitten off.”