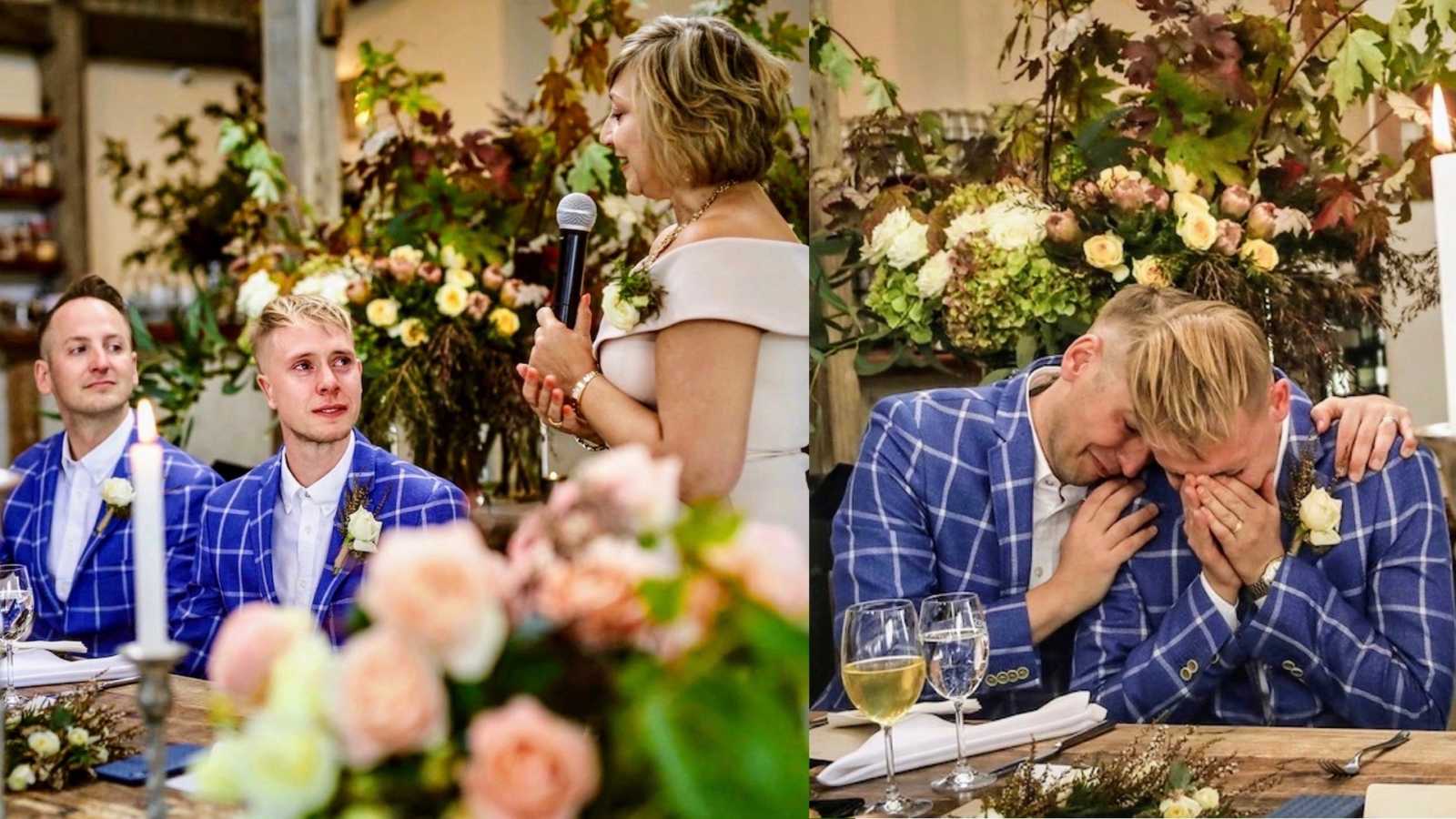 “There has been some curiosity and confusion for some of my Christian friends who are wondering how it is that I happily walked my son, Lachlan, down the aisle to marry his partner, Paul, just a few weeks ago.

Lachlan and I have always been very close, particularly as my first husband, Lachlan’s father, Matthew, died when Lachlan was only almost 8 months old. Lachy has always been a creative child. Drama and dance were his love, and he would often be dressing up, and as my friend Jan will attest to, loved dressing in his friend Aria’s fairy costumes!

Lachlan was teased at school from a very young age for being ‘different,’ and as he became seriously dedicated to dance, the bullying became equally serious, and sadly was worse in the Christian School he attended where he was called ‘gay dancer boy,’ was constantly being hassled by the boys in his year, and at one stage received death threats. As a mother of a beautiful, loving boy, it is extremely distressing to see your child bullied for simply being himself.

His heart for giving was amazing – I remember at Christmas time one year he had gone through his bedroom and found little things he could wrap up and give me as gifts, as there was nobody to take him shopping for me. Even when I was handing him his gifts from ‘Santa,’ he would put them aside and say ‘No, Mom, I want you to open this!’ I still have the little box full of shells and beads he gave me that year.

It was no surprise when, fast forward a few years, we were having dinner in Melbourne and he said to me ‘Mom, it’s inevitable.’ He had dated a girl for 3 years, but had struggled with the fear that if he went down the track of trying to be what he felt was expected of him (and purely to please others), marrying a girl and having children, that one day he would end up hurting people.

It was when he said to me that it was not what he would choose for himself, and that if he could flick a switch and turn it off, he would, I realized this was no choice. I knew from watching him all his life, but this was another confirmation. He had read every book, researched where this had possibly come from, and had been wrestling with it for years.

The hardest thing for him, the thing that took him years to come to terms with, was that by him taking this stand, he may have had to cut himself off from me, as he knew I was a woman of faith and there were plenty in the church who believed it was wrong, including the man I was then married to. I admired Lachlan’s strength and courage. It was a bold and brave thing for a young man to do. We cried together that night, sitting in the restaurant, hugging each other. I knew then that I loved my son, and nothing would ever stop me from loving my son. But I had some thinking and some praying to do. Lots.

I read a lot, talked to pastors, theologians, I studied different perspectives, and frankly, it was confusing. There are clearly verses in the Bible that speak against homosexuality. But there are way more verses that speak against greed, idolatry, and a range of other things that we see far more prevalent in the church, and often from those very people who are speaking out against sexual immorality.

Lachlan knew I loved him, and when I met Paul, I loved him, too. What an amazing young man, with such vision, and he loved my son greatly. I know some of Paul’s friends warned him he was in for a tough time, that we would not be accepting of him, and I believe he was surprised that we embraced him as easily as we did.

I came to a crossroads when Lachlan and Paul announced their engagement. The same-sex laws had just changed in Australia, so it was now legal for them to marry. At the time Lachlan told me, I was living in Montreal, Canada, after separating from my husband, and was going through an incredible soul-searching time, a time of healing, and a time of writing, reading, praying, and waiting on God.

Late one afternoon I got down on my knees and prayed like I had never prayed before. I was sobbing, and I said to God ‘You know I love you, and you know I love my son. What I don’t understand is why you are asking me to choose between the two of you. But if this is an Abraham and Isaac moment, and I need to sacrifice my son in order to stay true to my faith, as much as it would grieve me, and as much as I don’t understand it, you know I would, but please, please tell me that is not what you want from me.’ In that moment an almost audible voice spoke these words to me: ‘I gave up my son so that you don’t have to.’

And that is why I happily walked Lachlan down the aisle to marry Paul on April 22, 2019. And that is why, at the end of my speech, I tied the rainbow sash around me and raised a toast to love:

This story was submitted to Love What Matters by Vanessa Hall of  Trust and Transform. Submit your own story here, and be sure to subscribe to our free email newsletter for our best stories.

‘I usually hug a crap ton of strangers but because of Covid, I’m home in my bed, with no rainbow to wash off my face.’: Mom calls for LGBTQ love and acceptance

‘I prayed every night for years God would change me.’ The loving environment I created for my kids was now in full question.’: Christian mom to LGBT daughter urges ‘LOVE is the answer’