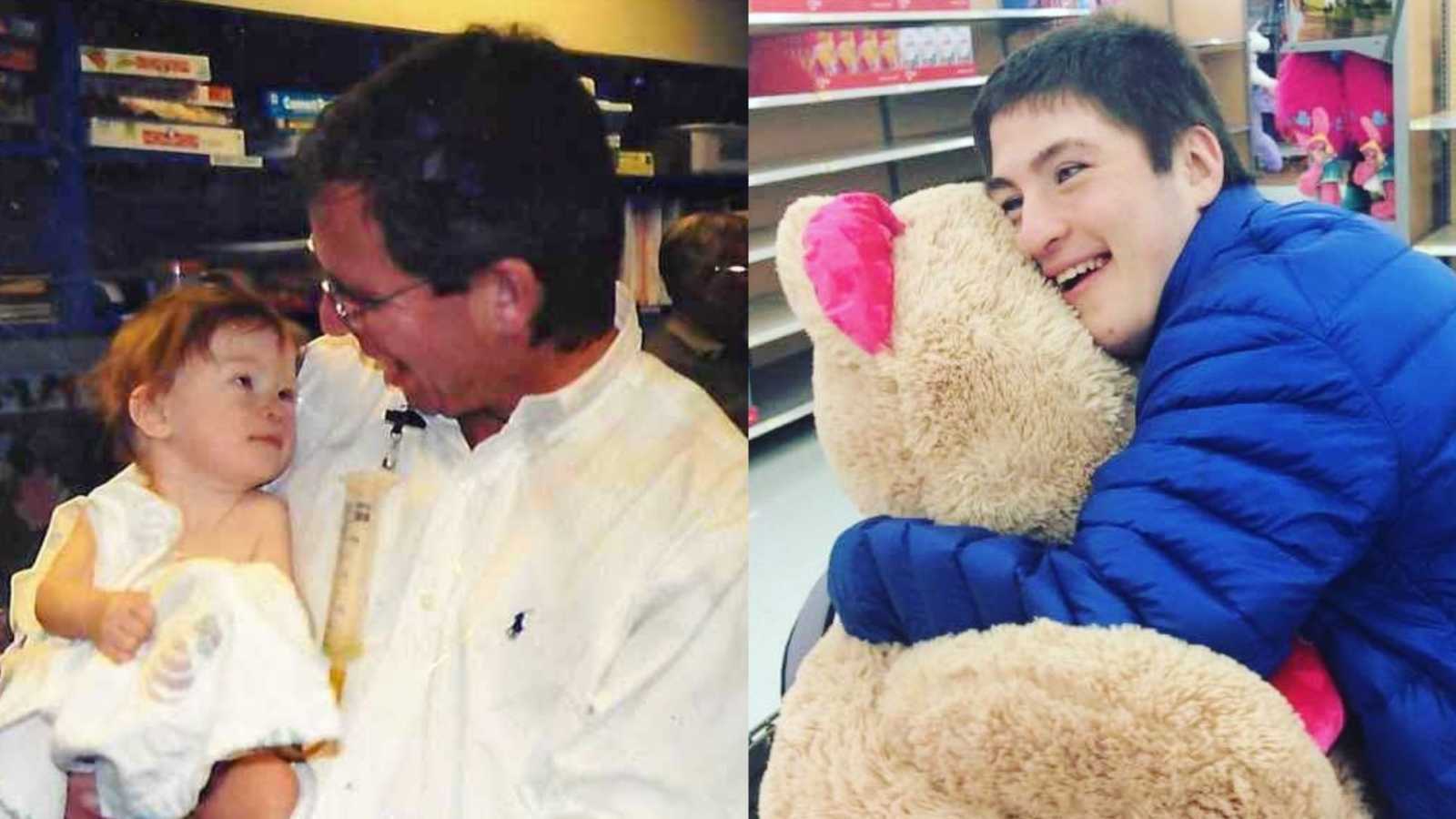 “I never even wondered what challenges a family faces when raising a child with special needs. I never had to. Until October 26, 2001.

Despite numerous ultrasounds by several physicians including his own father, we did not know our sweet Wesley would have special needs until the moment of his birth.

His dad brought him over to me wrapped up, barely five pounds. He was weak and limp. In the gentlest way possible, Gary told me Wesley had several anomalies and needed to be seen by a geneticist. As I lay on the operating room table, not even stitched up from the c-section, I was thrown into a mental and emotional panic. I was thrilled to have my baby but terrified by the words used to describe him. I don’t believe humans are designed to feel two such diametrically opposite emotions at the exact same moment but there I was caught in the torrent of them. How on earth could my heart be rejoicing and breaking at the same time?

Unlike his older brother’s birth when my room was filled with flowers and a constant flow of people, with Wesley we had no visitors. Not one person came and no flowers were delivered. No one knew what to say, so they said nothing. How I wished they would have just said something even if it was they didn’t know what to say. We felt completely alone and isolated and that added to the grief we were enduring.

Three weeks later we went to Omaha to see Dr. Bruce Buehler seeking answers. It was November 16th and one of those days that forever defined my life as ‘before’ and ‘after.’

After polite introductions he and a colleague examined Wesley. My small baby was flipped from side to side and studied. It was very clinical as if they were two mechanics figuring out why a car was stalling. ‘Did you know he has a cleft palate?’ Dr. Buehler asked. I shook my head no. Another anomaly. My heart sank as the number of issues my son had escalated.

They excused themselves to confer and returned 20 minutes later with a large text book. Dr. Buehler flipped it open, pointed to a picture and said, ‘We believe your son has Rubinstein-Taybi Syndrome.’ Syndrome. There was the word I dreaded. The room began spinning. As he went on to describe the syndrome, I interrupted and asked, ‘Will he be mentally retarded?’ Dr. Buehler looked at me with compassionate eyes and said, ‘I don’t like to label children. If you believe he will be an average child with RTS he will be an average child with RTS. But yes, he will be mentally retarded.’ I heard little else he said. Excusing myself to the restroom, I collapsed to the ground sobbing.

How I wish I could speak to myself laying there on that bathroom floor seventeen years ago with the knowledge I now have. I would say, ‘Do not be scared. This journey will make you strong yet soften you at the same time. You have the privilege of entering this new world where love knows no bounds even though no words are spoken. You will be his voice and find your own. He will teach you more than anyone else ever has or will. You will be exhausted. You will cry out of frustration and then try again. You will be a better mother, wife, daughter, sister, and friend because your son has special needs. So stand up. Brush yourself off. Grieve because you have lost a very significant dream but you will dream new ones. This isn’t the worst day of your life. It is the day you begin to become who you were meant to be.’

I lived in one world before Dr. Buehler began his sentence and by the time he put a period at the end I had been thrust into an entirely different reality. It was a foreign land with an unknown language and landscape. This new world had various therapists and a long list of physicians with specialties I never imagined I would need for my child. It had hospital stays and surgeries because every cold would turn into pneumonia. It was a place where I would be told my son had failure to thrive and he would need a feeding tube to live, the first of many surgeries. I would need to learn a new language with acronyms I still try to figure out. I would need to quickly learn medical terms, how to speak to physicians, and to advocate hard for my child.

Three times I would find myself in hospitals crying out to God, begging him to let me keep my son after the doctors shrugged their shoulders and said there was nothing more they could do. Three times God answered ‘yes’.

We would celebrate his first birthday in the Pediatric Intensive Care Unit. Wesley would learn to crawl when he was 18 months and walk when he was four years old. It would not matter in the least that it took so long. All that mattered was he did and he never gave up. Verbal words would never come other than one. Mom. And that was more than alright with me.

The world of special needs has taught me to take nothing for granted because absolutely nothing is a given. Not every milestone is reached and certainly not according to a chart in any book. Every accomplishment is a major victory and celebrated as such. Life here is amplified. The highs are exhilarating and the lows are crushing but having the honor of being Wesley’s mom is worth the ride. For I am mother to my hero and he is unconquerable.

I often hear words of pity from those who find out my son has special needs. In reality, it is I who feel sorry for those who don’t live in my world. It is a place where hugs are given freely and genuinely. It isn’t an ordinary hug either. It is the kind of hug you expect to receive from someone you love deeply but haven’t seen in a long time, only Wesley hasn’t just met you. Love is unconditional and pure. Wesley doesn’t care where you came from, what you did, or your political stance. He loves you because you exist and, therefore, have value. It is a world where love wins the day, everyday.

On February 10, 2011, I found my husband in the woods behind our home, dead from a self inflicted gun shot wound. He was a good man who struggled with a bad disease. Those issues won that day and our lives have not been the same since. Because of Wesley’s cognitive impairment he does not understand. When he sees a man who shares similar features as his dad did he will become excited and sign ‘Daddy.’ He waits for him to come home still and my heart breaks all over again. However, suicide is such a complicated grief and at times I am grateful Wesley does not feel it.

We have faced incredible challenges, set backs, and brokenness. The two constants that have guided my journey thus far are Wesley’s determination to never give up and my deep dependency on God. Miracles appeared at every hospital room, surgery, and ambulance ride.

Wesley has had miraculous recoveries after the doctors told me he would most likely die. I was told he may never walk yet he did. He consistently proves the doctors wrong. The miracle is my son smiles gigantically and loves deeply despite his challenges. The miracle is I am a better human being not in spite of, but because of special needs.

Other times my miracles were not the ones for which I prayed. The miracle I wanted was for my husband to put the gun down and come back inside. The miracle I received was strength, peace, comfort, and the tenacity to carry on. The miracle is God shows up. He shows up each and every time. Living in the world of special needs has taught me to look for and, more importantly, find the miracle that is always, always there.”

This story was submitted to Love What Matters by Jocelynn Helmbrecht. Follow here on Instagram here and her website here. Submit your own story here and subscribe to our best stories in our free newsletter here.

‘People don’t understand how important it is to NOT park on the blue/yellow lines’: Mother of child with special needs urges others to respect handicap parking rules’

‘He swooped in and saved her’: Prom dates with special needs finally able to share their ‘amazing’ night’ 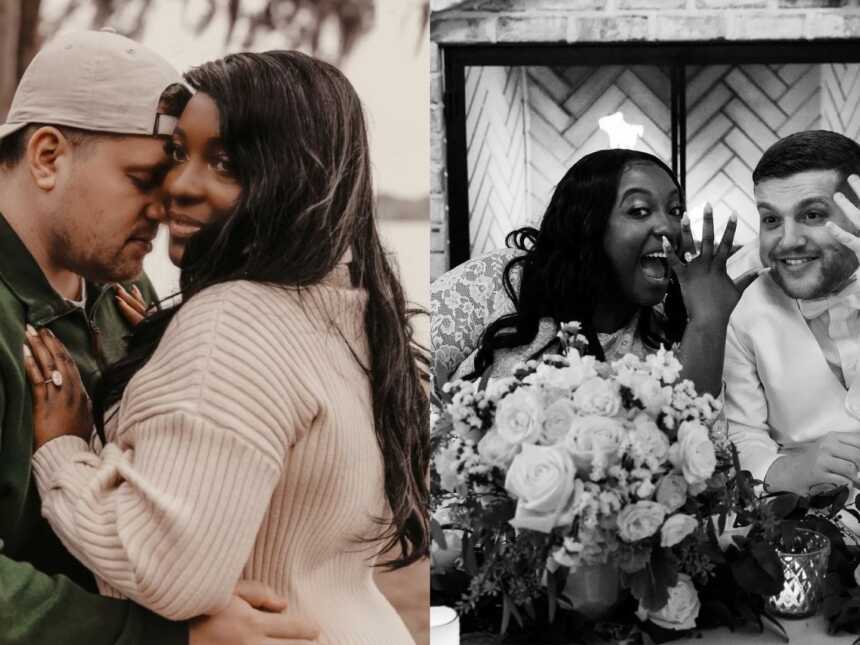