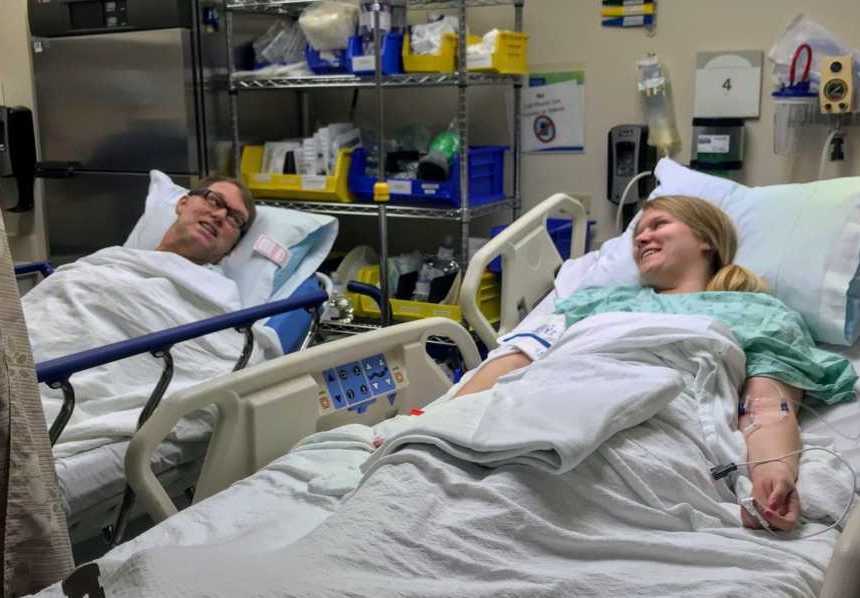 “I’ve always been a daddy’s girl. I’ve always looked up to him as a hero of mine. He came from hard times and made it known that he would do whatever possible to give us the best life. So, of course, I was so honored to be able to give him an extension of his life.

I’ve known my whole life that I would someday have the opportunity to give my dad one of my kidneys.

My dad, Dennie McGee, was diagnosed with Focal Segmental Glomerulosclerosis (FSGS) in 1995 when he was 30 years old. I was just 4 years old when my dad was diagnosed. FSGS is a disease that causes scarring on the kidney’s filters. This allows too much to be filtered through, which basically defeats the purpose of the kidneys. He and my mom had noticed that he was retaining water in one of his ankles. She eventually nagged him enough to get him to the doctor to see what was going on. He was told he’d have 10 to 15 years until his kidneys would eventually fail.

In 2010, his kidney function dropped below 20% which deemed him eligible for the transplant list. His sister (my aunt) immediately got herself tested andended up being a 100% match! My dad was only on peritoneal dialysis (PD) for 3 months before having the transplant in September of 2010. The surgery was a complete success. He was producing urine immediately. Their recovery went very smoothly.

However, my dad’s new kidney lasted him about 5 years. His disease infected his new kidney. This was a known risk going in, we just didn’t know how long it would take. My mom got tested and was hopeful they’d match because her blood type is O, but unfortunately, his antibodies were attacking hers which made it impossible to go forward.

They scheduled us for March 7, 2018. We found out, from a Redditor, that March 8th is National Kidney Day and International Women’s Day, which was a pretty neat coincidence. My dad and I were both so nervous that one of us would get sick somehow. It almost seemed too good to be true. Thankfully, we both stayed healthy and we were making plans for the big day!

My surgery was scheduled for 7:30 a.m. and my dad’s for 9:30 a.m. It was an emotional morning for us both. I could tell my dad was so nervous for me. He kept asking me over and over how I felt and if I was doing okay. At the same time, I had so many thoughts going through my mind. I was so worried about him. He just laid there looking over at me the whole time making sure I was okay and trying to overhear everything the nurses and doctors were telling me.

The surgery was a complete success! I woke up in recovery immediately asking how my dad was doing.

My dad was sent to ICU for recovery. He was producing urine right away! We both had to walk around as much as possible, so we would walk to each other’s rooms so we could check on each other. I was released on Friday and my dad went home on Saturday. My dad walked out of the hospital on his own, but I had to be wheelchaired out because I’m a big baby.

‘Our daddy needs a kidney’: Father’s desperate need for a transplant ‘to watch the boys grow up’

Currently, my dad is doing wonderfully. All his numbers are right where they need to be and he’s feeling better than ever.

I’ve always considered myself a very fortunate person to have been raised by a man like my dad. He ultimately created me and gave me this opportunity. I never thought our relationship could get any stronger, but even just 2 weeks after the donation, I can hear the joy in his voice a little more and the sparkle in his eye shines just a little brighter. He will now always have a part of me with him. And I will always have the scars to remind me of this special moment in our lives.

So many people have told me that what I’ve done is such a selfless act, but in reality, I feel kind of selfish because I only did this so I could have my dad in my life as long as possible. He’s been the most supportive, loving, funny, and caring father to me my whole life. I am so incredibly thankful that I was able to do this for him.

This has by far been the most gratifying experience of my life. I can’t wait to make the most of these extra years with my dad. He will never know just how much I love him and respect the father, husband, and man that he is.”

This story was submitted to Love What Matters by Tessa McGee, 26, of Fort Worth, Texas. Submit your story here, and subscribe to our best love stories here.