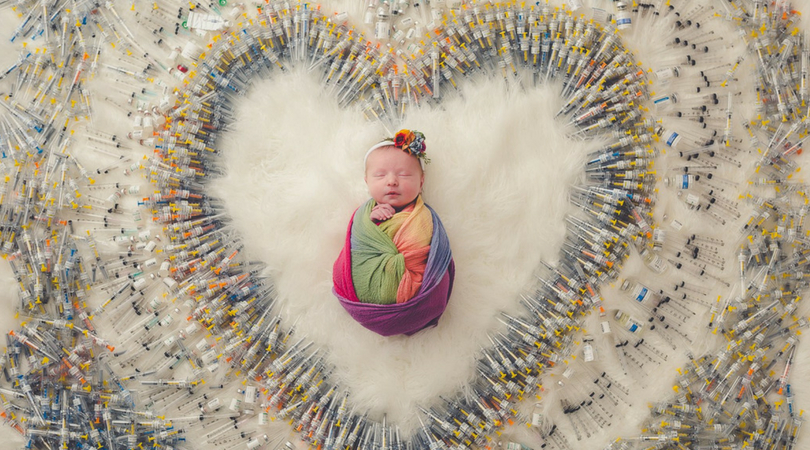 “Patricia and I met in February 2013 and started dating a couple months later.  After almost a year we decided we wanted to grow our blended family by one more. I have a biological child from a previous relationship and she has a non-biological child from a previous relationship. We assumed it would be pretty easy. We would pick a donor go to a doctor and in 9 months we would have our baby! We were completely wrong…

In Feb 2014 we want to a fertility doctor and started the process. He recommended doing IUI which is far cheaper and less invasive then IVF. We picked our donor and went in to start when our first 2 rounds of IUI failed we knew we needed to get more aggressive. We found another doctor and he began the process of IVF.

We went in for an egg retrieval with high hopes only for it to fail and we got no eggs!  The doctor said let’s try again next month so again we went back in again and was able to get 20 eggs. After the fertilization process and genetic testing, we had 5 good quality embryos.  3 girls and 2 boys.  We were so excited!

So, we started the first transfer and quickly found out we were pregnant!  At 6 weeks Patricia miscarried. We were crushed but told that it’s common to lose one before success! So, we went in to try again. Once again, we were pregnant! But lost that one a few weeks later at 8 weeks.

At that point the doctor started genetic testing on Patricia and we discovered she has Factor V Leiden, a blood clotting disorder that is thought to cause blood clots to develop in the placenta and then miscarry. Now that we knew the issue we knew what we were working with. We went in for the 3rd but never actually got pregnant. By the time the 4th one came, and we got a positive pregnancy test we just knew that it was it for us!

We went in at 8 weeks and saw his tiny heartbeat and his little arms wiggling. We were overjoyed!  We went in at 11 weeks to find his heart had stopped. We were done…  Crushed, confused, and heartbroken.  We took a break from it all and almost through in the towel. But we knew we had one embryo left. If we didn’t try it, we would have to discard it and there was no way we could do that.

We found a 3rd doctor who specializes in Patricia’s genetic disorder and went in for a consultation. He started Patricia on a crazy diet and a regiment of pills we had never even heard of. We joked often that if he told her to stand on her head we would try it!  Digging deep into our faith and our own courage we decided to try the last one.

On December 8, 2017 we went in for a transfer. We tried hard to keep hopes high, but we were terrified… This was it. No more chances. We found out a week later we were pregnant for a 4th time. We had a trip planned to Disney World for New Years and were so nervous about going. The day before we left we went in for an ultrasound, but it was too soon to see a heartbeat or anything. So, we said a little prayer and went to Disney World with the family. The day we came back we went in for another ultrasound and there it was our baby girl’s perfect little heartbeat.  We like to say she’s a true Disney baby since that’s where her heart started beating! Ha-ha.

Patricia had a rough pregnancy. She was sick the entire time, and as much as we wanted to celebrate we were a nervous wreck every day.  Each ultrasound was just as scary as the last. But each time we were told she looked great. Then finally on August 3, 2018 our little London made her debut! Seeing her little face and hearing her cry was the best feeling in the world.

We had planned from the beginning to do a picture with all the shots, although we had no idea there would be so many, but we wanted to document a journey that was very personal to us. When I contacted Samantha at Packer Family Photography I asked her about doing the picture she said she was excited for the challenge.  I brought the shots all to her and told her to do what she thought was best.

When we showed up for the shoot and saw them all on the carpet we were blown away. Watching her take the picture was super emotional.  When she posted it for us to see we fell in love. But we had no clue so many others would love it too. It blew up so quickly after that.

This is the first time I have been asked to do a photo like this! I was honored and wanted to create something…

We love that our image can bring hope to so many in similar situations. It’s a rough journey but hope and faith are the only things that can bring you through it.

The best advice we can give is to find someone that’s been there too someone to talk to. Don’t keep quiet!  Talk about it. We had a great support system and relied a lot on our faith and the power of prayer.”

This story was submitted to Love What Matters by and Kimberly O’Neil, 37, and Patricia O’Neil, 30 of Phoenix, Arizona. Submit your own story here, and subscribe to our best stories in our free newsletter here.