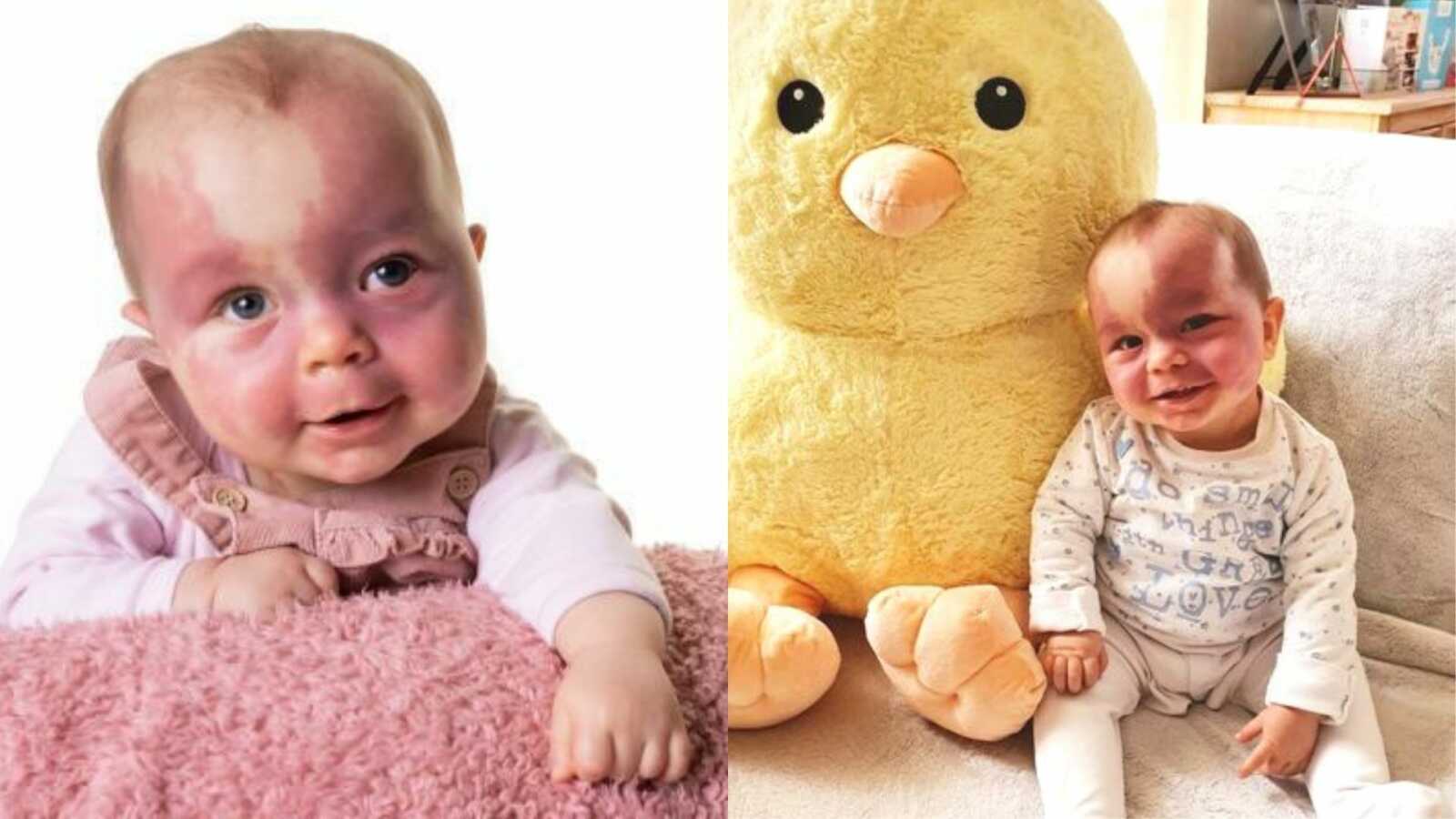 “Lily was born December 13, 2020 at 12:15 a.m. at exactly 37 weeks. I had a normal delivery that was very fast. I was only in the delivery room for an hour and Lily was here. During my pregnancy everything was normal apart from she was measuring small, so we had to have extra growth scans.

As soon as Lily was born, the doctors put her in an examination crib. She was 4 lbs. 7 oz. — so very tiny. She came out with a purple face. Initially the doctors were not sure if the coloring on her face was from birth or if it was a birthmark; only time would tell if it would fade or not.

A few hours old, and after her first few feeds, Lily began to bring up yellow mucus. The midwives called the doctor to check over Lily. It was by pure luck that just as the doctor arrived at my hospital bedside, Lily was starting to turn blue and was not breathing. This was the moment our journey began… She was only 18 hours old!

She was taken straight to the resuscitation unit, stabilized, and then taken to the neonatal unit to be placed in an incubator. During the time Lily was apart from us, we were taken to a private side room and told the doctor would come get us once Lily was stable. It felt like hours, but it was only around 40 minutes.

We were taken to the NICU ward where we saw our tiny baby girl, 18 hours old, hooked up to monitors, in an incubator, with an oxygen mask laying beside her for quick accessibility.

The doctors explained to us that Lily was having episodes of apnea (where she stops breathing). These episodes came in clusters and happened quite frequently for the next 24 hours. We remember seeing the medical team crowd around her and all we could do was stand back and watch the numbers on the monitor get smaller and smaller, then finally they would return to normal level where she was stable.

Lily had an MRI scan and an EEG scan at 2 days old. With the results of these, plus her birthmark that was called a port wine stain, the doctors were able to give an official diagnosis of Sturge-Weber Syndrome. This is a syndrome that is formed in pregnancy. It’s where some of the brain nerves do not develop during pregnancy. It’s not genetic and it’s very rare. It includes different types of epilepsy; Lily’s kind is called apnea episodes.

We were both numb for a couple of days after her diagnosis. We kept thinking, ‘Why us? Why our little girl? Was it something I did while pregnant?’ All these questions were running through our heads. Due to the pandemic, none of our family were allowed to visit, so that made it harder. We were just grateful we had each other to lean on and be each other’s support. The hospital was very kind and allowed Dan to sleep over for a couple of nights. We were so grateful for that and always will be.

Lily has an older sister, Chloe (age 5). It was the hardest thing being away from her for 9 days. She didn’t understand why she couldn’t come meet her new baby sister — thank God for video calling. It was the next best thing. When Chloe finally met Lily, it was an instant bond. She is the best, strongest big sister, despite Chloe being a little girl herself. She fully understands Lily’s condition. She is caring and protective toward her.

The left side of Lily’s brain is affected, which means she will always have weakness on the right side of her body. Due to Lily’s birthmark covering her left eye, she also has glaucoma. This is a condition where the extra blood vessels behind the eye increase the pressure, causing cloudy vision.

Lily was 9 days old when we were finally discharged to go home. At 2 weeks old, we had our first ophthalmology appointment at Birmingham Children’s Hospital, to officially confirm her glaucoma. The outcome of this appointment was learning Lily needed eye surgery to drain the cloudy fluid to help improve her vision. This procedure was performed at 4 weeks old and then repeated at 12 weeks old.

On top of her neurological and ophthalmology appointments, we attend physical sessions every 4 weeks to help build Lily’s strength. Due to her right side weakness, Lily is unable to use her right hand.

Lily takes two types of seizure medication twice a day, a blood thinner to prevent a stroke in later life, and eye drops to control her eye pressure.

She has to wear a wrist splint at night time on her right hand. The aim of this is to help stretch her muscles and prevent tightness. Alongside this, she also has little boots to help weight bare her lower leg muscles.

Eventually Lily will be having brain surgery to disconnect a section of her brain on the left side. The outcome of this is to make her seizure free and medication free. This operation has been put on hold for now as she is doing so well.

Despite all of this, Lily is the happiest little girl. She is approaching 16 months now and never stops smiling. Her little personality is starting to shine through; we can already see how sassy and determined she is going to be. Although she can’t crawl or walk, she is really quick at rolling. She loves to play with all types of toys.

We are so proud of everything she has accomplished so far and can’t wait to see her go from strength to strength.

If you are a parent reading this article and are going through a similar situation where your child has a rare condition, lean on your support system, whether that be family, friends, doctors, or nurses. They are all there for you. We are so thankful for our family and friends; each and every one of them has helped and we know they always will.”

This story was submitted to Love What Matters  by Alice and Dan of Worcestershire, UK. You can follow their journey on Instagram. Submit your own story here and be sure to subscribe to our free email newsletter for our best stories, and YouTube for our best videos.

‘Please, make it stop. Don’t take my baby from me!’ The 16 minute helicopter ride felt like an eternity.’: Mom has child with Sturge-Weber Syndrome, ‘I am so honored to be his mom’

‘He has a big birthmark on his face.’ I didn’t care at all. He was so perfect, I was in awe.’: Mom gives birth to baby with Port-Wine Stain, ‘Don’t let fear rule you’ 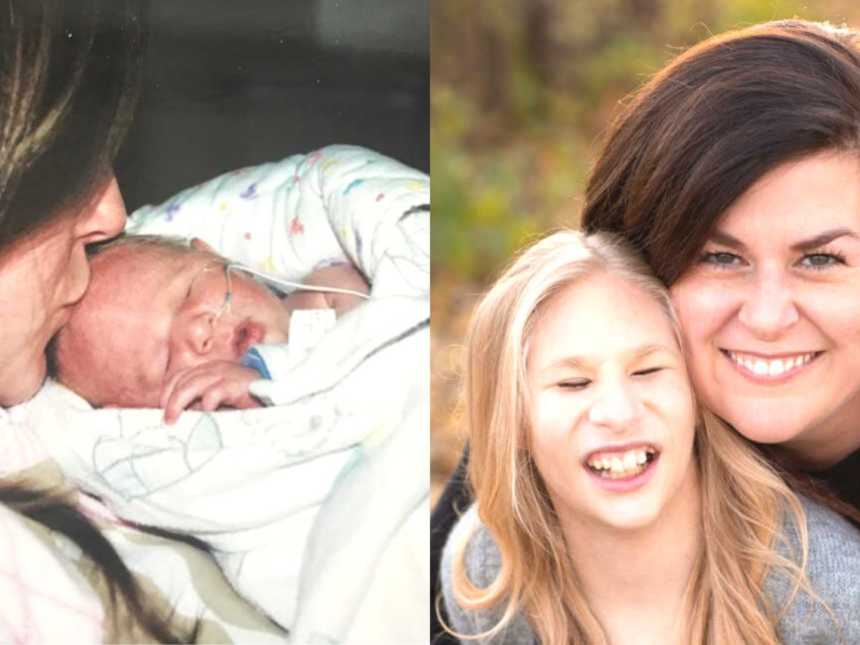 ‘We were young. He didn’t want to continue the pregnancy. Later that day, my baby’s father died of suicide.’: Mother overcomes ex’s suicide to care for blind daughter

“I knew I had to see this pregnancy through. The father was furious with me. I had always hoped he would eventually come around. I had not only lost my friend forever, but my baby had lost her father. I didn’t have much time to grieve.”