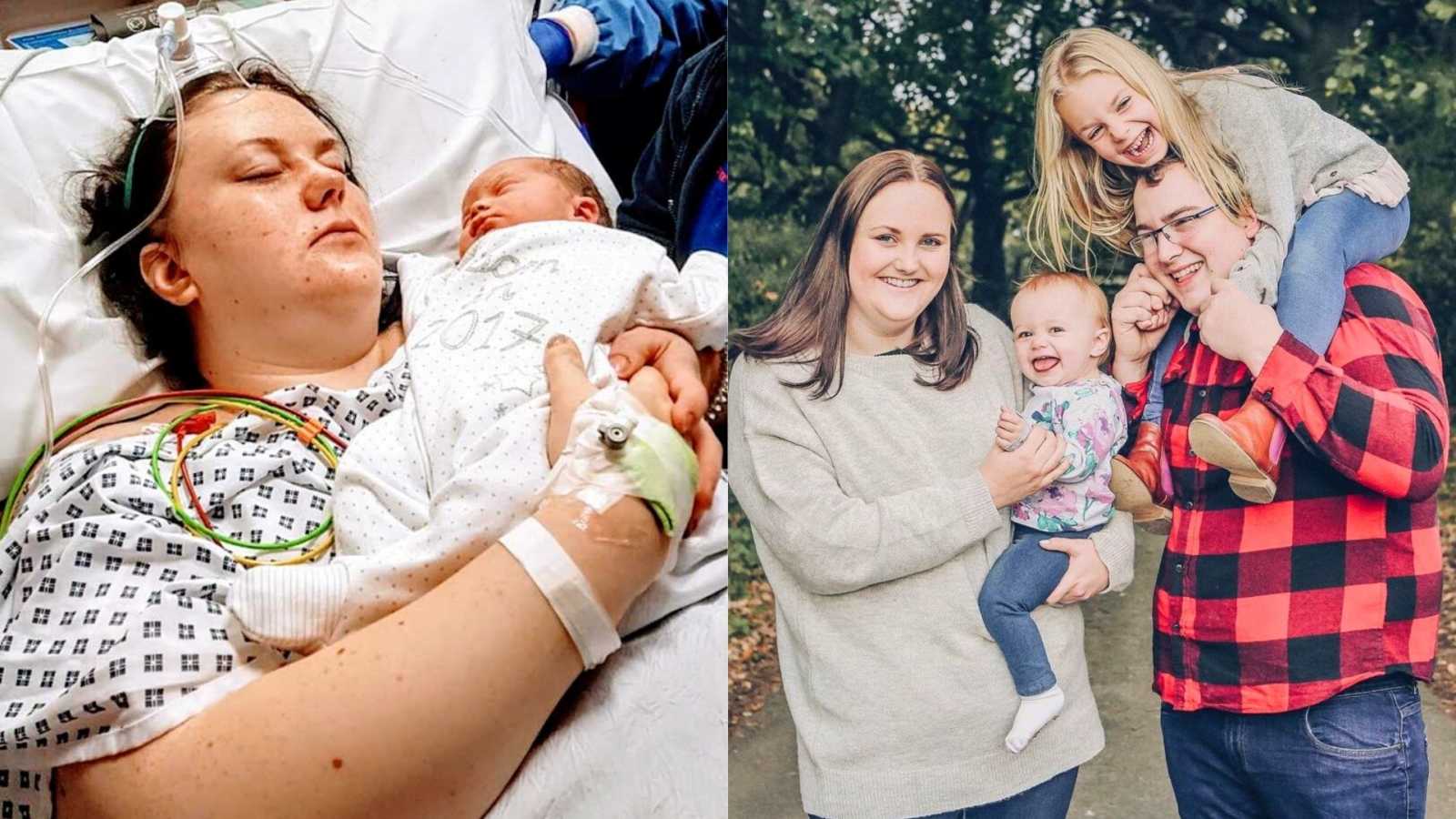 “I was due to have my second baby in October of 2017, and it was agreed that I would be induced at 38 weeks due to repeated episodes of reduced movements. This was mainly due to having an anterior placenta, I found movements were very cushioned – which meant I didn’t always feel them and there was no pattern to them at all. So I was just relieved that the end was finally in sight, as I’d had a very stressful and anxious pregnancy. Never did we think that we would finally leave the hospital a week later, completely traumatized.

I’d had a successful induction with my first daughter (four years previous), so I naively expected a similar, if not easier experience second time around… but I couldn’t have been more wrong and nothing could have prepared us for what was to happen.

I remember feeling both excited and nervous at the same time; at the thought we were finally going to meet our new baby. That morning, I was induced using the hormone gel and after multiple attempts over several hours, nothing was happening. I eventually had my waters broken and was placed on the hormone drip for over 8 hours, but I still wasn’t progressing, despite being in labor and having contractions. Several hours passed and it was eventually decided I needed an emergency c-section, due to ‘failure to progress.’ Those feelings then went from disheartenment, to pure fear; knowing I was about to endure a major operation. I just remember the doctors saying that this was the safest option now, for both myself and my baby and my partner did his best to reassure me that it would be okay.

Thankfully, the c-section itself was very straightforward and our second daughter, Amelia, arrived safely into the world. We had skin-to-skin almost immediately, which was just amazing and I felt a huge relief that it was all over, now that she was here in my arms.

However, it was from here that things started to go horribly wrong. We had not long messaged family and friends with our news, when my midwife noticed I was having a severe Postpartum Hemorrhage. To be honest, I didn’t really know what was going on. I was very tired, although I’m not sure if this was me recovering from the c-section or the fact I was losing a lot of blood – or maybe a combination of both. Pads underneath me were being changed frequently and my partner could see I was losing a lot of blood – which he knew wasn’t normal. He said he knew it became serious when it went from being just one midwife in the room, to three or four midwives and doctors. Despite several methods to stop the bleeding – nothing was working. Some of my memories are quite blurry around this time, however I clearly remember them telling me that the only option was to go back to theatre and be put under general anesthetic and that there was also a 1 in 1000 chance of a hysterectomy. I was absolutely terrified. I don’t remember saying anything, I was just very upset and they were trying to calm me down so they could take me back to theatre. I remember them whisking me away, leaving my partner and newborn baby behind, not knowing when – or even if, I would see them again.

In theatre, after the Bakri balloon method failed, I had another operation where they stitched my uterus (called a B-Lynch Suture) and thankfully this eventually stopped the bleeding and I narrowly escaped a hysterectomy. Whilst in theatre, I also had a blood transfusion to replace the blood I had lost – which was 4.5 liters in total. I spent some time in a recovery room and then in the High Dependency Unit.

I remember being in a lot of pain for a long time afterwards and I spent the first couple of days high on morphine. I was so weak; I could barely hold my baby for long and I felt so useless not being able to look after her. When I was alone, I would get upset – as I was trying to come to terms with what had happened and I was having flashbacks, as I was just so traumatized. My partner was also traumatized, as he had witnessed everything from a different perspective. I wasn’t completely aware what was happening, whereas he had previously seen me losing a lot of blood. Then while I was in surgery (for the second time), he saw someone rushing to theatre with the blood for my transfusion. Unfortunately, there had been a lack of communication and he didn’t get an update for a number of hours. I had already been in there longer than they anticipated, so he naturally thought the worst had happened.

Although I know if it wasn’t for the midwives and doctors looking after me, things could have been so different. They were all amazing and technically saved my life and we will be forever grateful to them.

Over the past few years, I have openly shared my experience of birth trauma and PTSD after birth trauma, as I feel it isn’t spoken about enough and I’m passionate about raising awareness and helping other people who have gone through similar experiences. My advice to others is that your feelings are valid and birth trauma is more common than you think. It just needs people to talk about it and break the stigma. There is support available, including charities such as The Birth Trauma Association and therapy. I find talking about it helps and if by sharing my story, I can help just one person feel less alone, then it’s worth it.”

This story was submitted to Love What Matters by Emma Lambert. You can follow her journey on Instagram. Submit your own story here. Be sure to subscribe to our free email newsletter for our best stories, and YouTube for our best videos.

Sweet 2020 Baby, You’ve Been The Light In The Darkness

‘To my 2020 baby, you are the brightest spot of this difficult year. You are not cursed, you are not bad luck.’: Mom says newborn is ‘the beauty amidst the chaos’