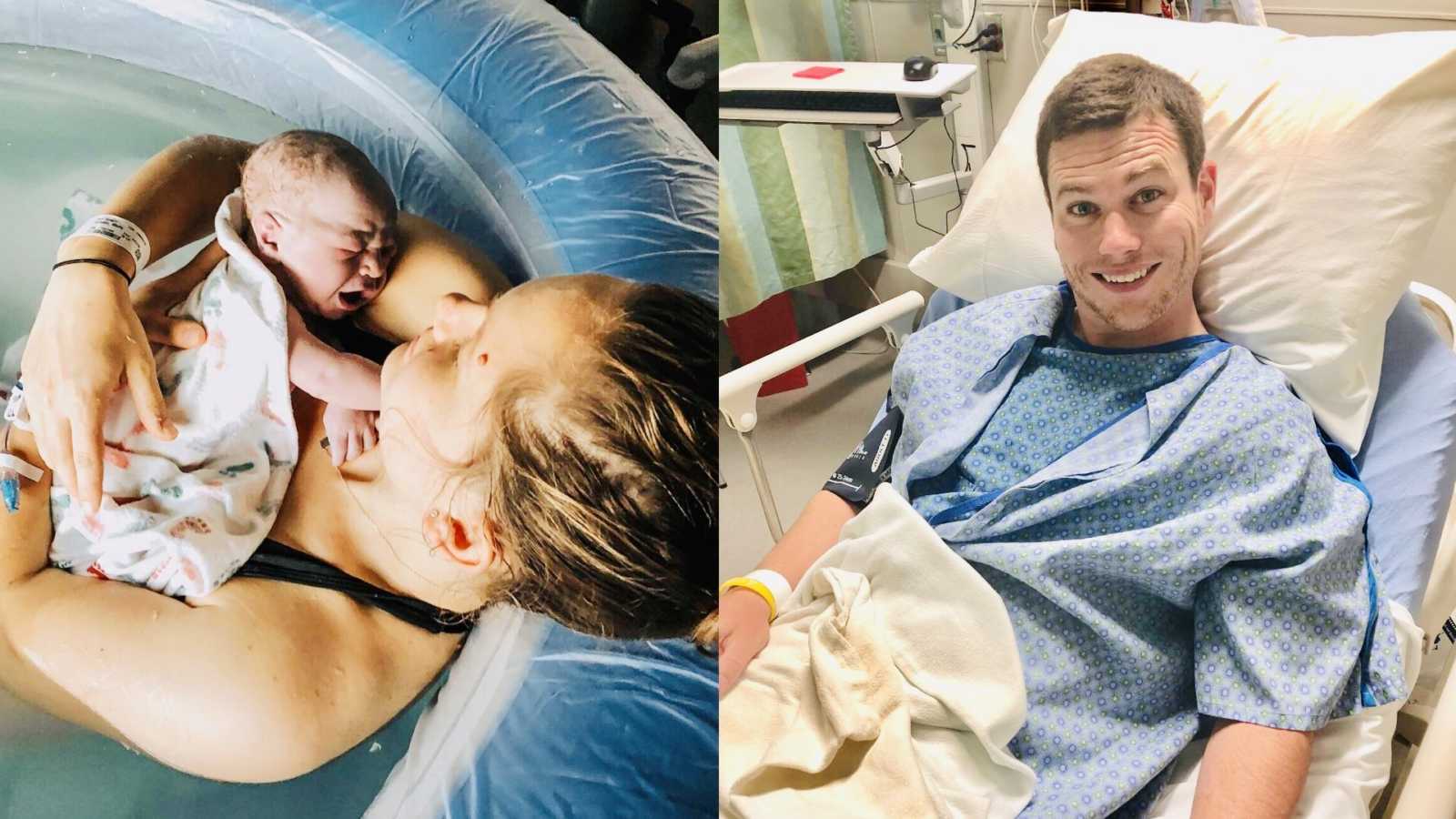 “7, 6, and 4 years ago I gave birth to my babies in three different states. After each of those births, I was given narcotics. The birth of my twins ended with them in the NICU and even though I really should have taken the pain meds, I didn’t take them as well as I should have since I believed ‘if my babies are suffering, I had to, too.’ It was a weird mentality to have but postpartum emotions make us do and think crazy things. The recovery from their birth was the worst one I had out of the three, but I just powered through knowing my twins had to be in the NICU for two weeks.

This past May I gave birth to my fifth biological child and I opted for an all-natural water birth with a midwife. I had this picture in my mind that I could handle all of it and I’d be fine. I have become a pretty ‘crunchy’ mama since my twins were born, so I barely take medication as it is. My plan was to do everything naturally and barely take pain medication afterwards. As proud as I was to have been successful with it, it really freaking hurt. I wasn’t prepared at all for the aftermath, even though I had done this three times before. This baby was almost two pounds heavier than any of my other babies. My hemorrhoids were raging and I seriously thought my bottom was going to explode. Not to mention the uterus contractions afterwards! After having five babies, it was not the most pleasant feeling.

After the few hours recovering in my birthing room, I was transferred to the post-partum wing. Once we got there I asked for some medication. The nurse explained my options were just ibuprofen. Huh?

My midwife came around and I asked for something stronger. I was told that they have done away with narcotics after birth and that only C-section patients are allowed to have stronger medication. I surely won’t argue that a C-section patient deserves some pain meds, but I really was dumbfounded that I would be denied anything stronger than what I can find in my own medicine cabinet. I felt instant discredit for how I was feeling physically and knew I wouldn’t be able to complain about my pain for the rest of my stay. I took the mentality of, ‘alright, Molly, you can survive this. Yes, it still sucks. But suck it up buttercup.’ Oh, and here’s a newborn baby to take care of in the middle of your most uncomfortable sate. No time to skip a beat!

The next few days were torture as my hemorrhoids were the worst they have ever been. I contemplated going to the ER again since I seriously thought my insides were falling out. But I knew there was probably nothing they could do anyways, so I just stayed as still as I possibly could with a one-week-old infant. My mom flew into town and she and my husband took care of my other children as I could not move. I cried for hours and hours, day and night. My bottom was so raw and so sore. Was my non-medicated, natural birth really worth this hell afterwards?

In hindsight I should have contacted my midwife for other options but I truly just didn’t think it would matter or that she would really care. I really got the vibe that I was on my own for this anyways so I didn’t even want to pay a copay to basically hear the same thing.

A month later, my husband Tim went in for his vasectomy. His procedure was at the exact same hospital I just gave birth in five weeks prior. This is really the first medical thing he’s ever had done so it was weird for me to be on the opposite side of the bed, watching him be the patient. I walked the halls with our baby while he had his little procedure. The nurse came out to get me once he was finished and I sat with him in recovery for a bit.

I asked him how he was feeling and he just said, ‘pretty good actually! This is nothing compared to what you’ve been through. I don’t care what any man says.’ It honestly made me feel validated in all of the craziness my body has been through over the years, bearing our children. He was awake for the whole thing and said it was a lot faster than he expected. They also gave him pain medication through an IV line they started when he first got there. I realize now this isn’t standard procedure and more of the ‘Lamborghini of vasectomies.’ Lucky him!

The doctor came in and explained everything I needed to know for the weekend ahead. At the end he stated, ‘I’ve also written him a prescription for 10 narcotics. You can pick that up from the pharmacy down the hall.’

I about fell out of my chair! HOLD UP A MINUTE! You mean to tell me that cutting vas deferens is more painful than pushing an 8-pound baby out of your vagina? You mean to tell me a bloody scratch is more painful than a 6-week bleeding vagina? A sore testicle is harder to handle than swollen labia and raging hemorrhoids? A 10-minute procedure is more agonizing than hours and hours of labor?

‘Men are such babies when they’re sick or injured!’ It’s a joke we all say. ‘Women are superior in pain tolerance!’ So let’s reward the men, but make the woman suffer because ‘they’re so strong.’ Noted.

A vasectomy is done on a Friday so that the men can have the weekend to recover. They return to work on Monday. They’re fine and it’s over within a matter of 72 hours. Some men are totally fine even hours later. My husband? He was completely fine. Or maybe he knew better than to complain for a second knowing how hard my post-partum was a few weeks earlier.

A woman gives birth and the thought of doing anything other than laying around for (at least) two weeks is a solid no. Our bodies just went through the absolute wringer. Everything hurts. Everything is mushy. We are leaking bodily fluids from many different facets. The marathon we just participated in takes a lot of time to decompress from. I mean, another human just came out of us. The whole experience is a beast of its own.

But none of that matters. Women are just expected to move on with their lives as if they just had a minor bruise. ‘Your bodies are made to do this. Women have been doing this for millions of years.’ Men are treated like a limb just fell off and are almost coddled until they feel better. The medical institution will determine women’s pain levels with a blanketed opinion but will throw pain medication at a man like candy? How is that ethical?

Again, we both were patients in the same hospital. If you’re not going to offer it to one person, why offer it to the other? I absolutely understand the argument of the opioid and narcotic crisis hitting our nation. But why offer them at all then? The blatant one-sidedness is truly mind blowing. Telling women they aren’t worthy of pain control is insane. It’s completely messed up to hold men to a more superior level.

A few months after my birth, my best friend and stepsister delivered babies in states on the other side of the country. Neither were offered higher pain meds even though one of them had 4th degree tears.

Our opioid crisis is out of control, so I understand the concern. But these are still human beings we’re talking about that have been through some crazy crap. Some women are totally fine after birth, but some are not. Instead of treating everyone the same with some made-up assumption, how about we start treating patients individually?

And how about more women become Urologists so that men aren’t prescribed absurd medication for a tiny cut. If a woman can survive birth with only ibuprofen, so can a man after a vasectomy. They can suck it up, too.”

This story was submitted to Love What Matters by Molly Schultz of Tried and True Mama. You can follow her on Instagram. Do you have a similar experience? We’d like to hear your important journey. Submit your own story here. Be sure to subscribe to our free email newsletter for our best stories, and YouTube for our best videos.

‘I stood up. ‘Screw this, I’m done! Get upstairs! You’re taking a bath!’: Mom credits ‘random post’ for reminding her water is the cure-all for her kids’ epic tantrums

‘This is crazy! We don’t have any pink hats left. This has NEVER happened before.’: Mom realizes signs from her dad in heaven were ‘loud’ throughout pregnancy with son

“I didn’t understand why people were screaming at the top of their lungs that abortion is healthcare, but now I do.”