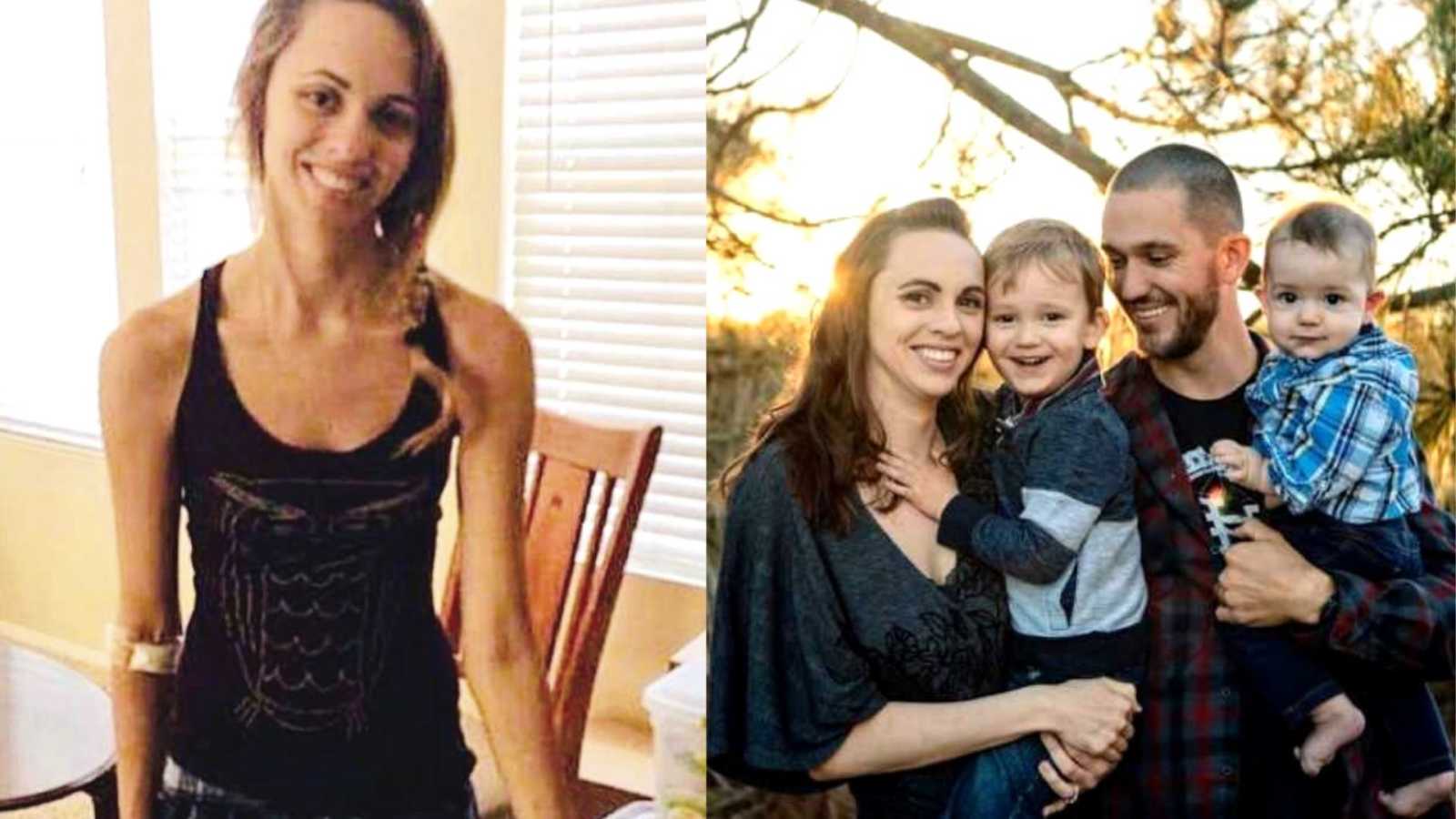 “My name is Megan, and I am 25 years old. I had suffered from gastrointestinal problems since the age of 4. Stomach aches, diarrhea, nausea, vomiting, stomach cramping, weight loss, etc. When I went to the doctors, they told my parents I had ‘IBS’ (irritable bowel syndrome.) I would complain daily of stomach aches. I couldn’t eat without feeling sick or having to run to the bathroom. School was torture. People made fun of me for ‘going to the bathroom too much’ and complaining of my stomach aches. Most people thought I was doing this all for attention. I tried to cope with my problems as life continued.

When I started high school in 2007, my problems got worse. I started seeing multiple specialists. I remember having an upper endoscopy and a colonoscopy done. Everything came back ‘normal’. My parents were just as baffled as I was. We were hoping the tests would have at least showed something to point us in the right direction as far as treatment goes, but again, we were at a loss. I started to lose more weight and nothing I ate or was offered to eat ever sounded appetizing. I was 110lbs and 5’7″. People started to think I was anorexic.

I could never go on field trips or go out to dinners with friends or family because I was constantly in and out of the bathroom. I missed quite a few important high school activities like prom, and Disneyland Grad night. It was horrible. I would wake up in the middle of the night, my heart racing, dry heaving until I finally threw up. My senior quote in the year book was ‘My stomach hurts’. I tried to make fun and light of my situation, but inside, I was miserable, misunderstood, and alone.

When I was 21 years old, I started seeing a new gastroenterologist who did yet another upper endoscopy, colonoscopy, abdominal ultrasounds, blood work, gastric emptying study, and hida scan. Basically, every gastro test possible, I had done. My doctor every included an order for a brain MRI to check for tumors! Again, everything came back ‘normal’. The doctors began telling me it was all in my head, and I should consult a psychiatrist. Feeling even more defeated, I started to doubt myself as well.

On September 8, 2014 I woke up around 3 a.m. feeling sick, yet again. I ran to the bathroom and like usual I had diarrhea. I was able to fall back asleep only to wake up a short time later feeling worse. My husband (then boyfriend) drove me to my parents’ house and while in the car, I started to violently throw up. I couldn’t keep anything down. I had him take me to the ER to get fluids because I was becoming increasingly dehydrated. They got me back and started giving me fluids and nausea medicine (which did not help much). After they took some blood work, they came back to tell me that my white blood cell count was twice as high as it should be. They told me my body was trying to fight off the stomach flu. They prescribed some anti-nausea pills, took my vitals one last time before sending me home, only this time, my temperature was slightly elevated. After arriving home, I got worse. I started getting major chills and was having cramping in my lower abdomen, vomiting so violently I was almost passing out, and diarrhea so bad I wasn’t making it to the bathroom. I was literally sleeping on the bathroom floor because every time I got up to go lay down in bed, I needed to throw up or go to the bathroom again. My fever was now over 101 and rising. My mom got home from work and asked me to lay down. She then pressed on my side and the pain I felt was excruciating. She took me straight back to the hospital. After an hour and a half, I was finally seen. I told them I was just in earlier and sent home and now was feeling worse with cramping and a fever. I told them I wanted to have a CT scan of my abdomen. The doctor was trying to dismiss me and kept telling me that all signs were showing I had nothing but the stomach flu. I insisted on having a CT scan and he reluctantly agreed. 3 hours later, I was finally seen for the CT scan. While we were waiting for the results I was sipping on water and having a conversation with my mom and husband. 20 minutes after the CT scan, the nurse came in and immediately told me I needed to stop drinking the water and the doctor was going to come talk to me. I thought everything was fine, but I noticed my husband and mother exchange a very worried look.

The doctor came in and told me something showed up on the CT scan but the symptoms I had were a little out of the ordinary, and that if I did have the condition, they thought it to be, it was extremely rare. He also decided for some strange reason that it was a good idea to tell me is last patient with this condition died… NOT COOL. They told me I needed to have surgery and that the surgeon was going to explain to me what was going on. The next day around 4 p.m. the surgeon finally came in and showed me the CT scan. He told me what I had was called ‘intussusception’ Here is the definition:

Less than 5% of adults are diagnosed.

At 8 p.m. I was finally wheeled back for surgery. The surgeon removed 6 inches of my small intestine and I was in the hospital for 6 days. He told me this was very likely the cause of all my problems since I was 4 years old and they were finally able to catch it on the CT scan when I had a bad ‘flare up’. It’s possible it may not have shown on a CT scan if I was not feeling ill. He also told me I was very lucky they caught it when they did. It’s possible my intestines could have torn or ruptured, and I could have passed away. 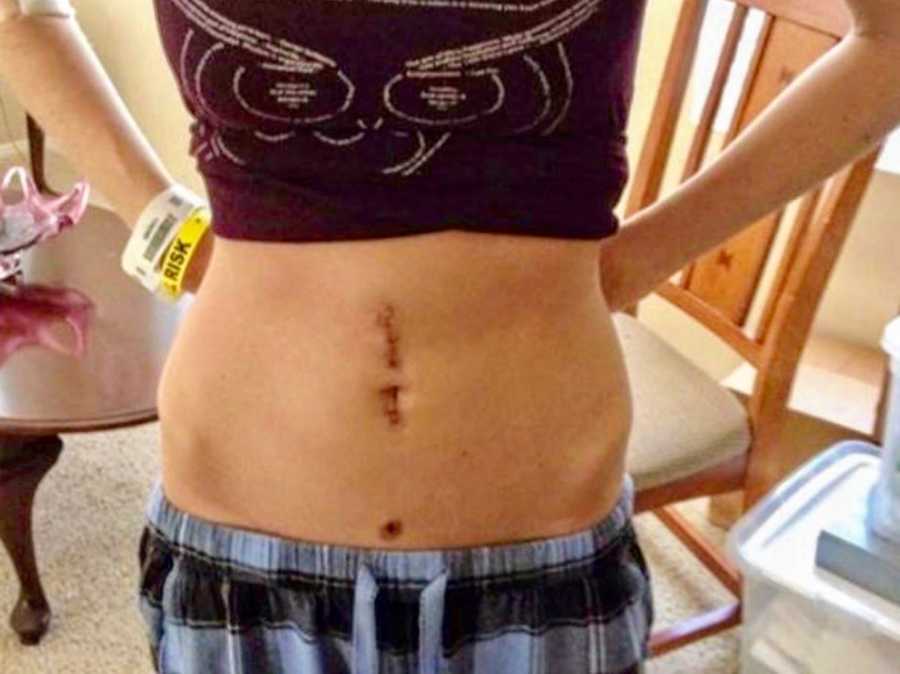 I weighed 94 lbs. when leaving the hospital. I looked like a bag of bones. I struggled for months after the surgery to regain my weight. 6 months after my surgery my husband and I found out we were expecting our first child. Being pregnant made me really take care of not only myself, but our unborn child as well.

I am much healthier now and have not had any problems since my surgery. I am able to go out to eat with friends and family and enjoy food and quality time without having to run to the bathroom or worry about getting sick. The surgery was quite literally a life saver. My husband and I now have two beautiful and healthy little boys. I have been told it is not a hereditary condition, but regardless, I will be keeping a very close eye on both of my boys as they grow up and if they show any signs of possibly having this condition, I will not hesitate to take them in.

My reason for sharing this story is simple – to save someone’s life. About a year ago I read a local news article about a 2 ½ year old little girl who had similar symptoms to mine but was misdiagnosed (just as I was) with the stomach flu and sent home. She passed away a day later. If her parents could have read my story, they may have their little girl with them still today.

PLEASE follow your gut. I knew something was seriously wrong, even when medical professionals tried to tell me otherwise. Had I listened to their advice, it’s very possible I would not be here today. No one knows your body, your symptoms, and your health better than yourself. If you think something is wrong, get checked out. Get 2, or even 3 different opinions if you can. Be thorough, your life depends on it.”

This story was submitted to Love What Matters by Megan Cline. Submit your own story here, and subscribe to our free newsletter for our best stories.

‘Do you ever worry about dying? You’re killing yourself.’ She was right.’: ‘Misguided teenager’ credits her unexpected pregnancy for saving her life after ‘horrible’ eating disorder

‘The doctor said, ‘How do you want to leave this hospital? With a poop bag or in a box?’ I denied consent 8 times.’: Woman with ulcerative colitis, ostomy bag says ‘you only get one body, love it!’

‘It’s nobody’s business!’ I’d tell myself. I was in survival mode. I dropped to 75 pounds. I thought I’d never wake up.’: Woman shares recovery journey from eating disorder, ‘I chose a life of fullness’