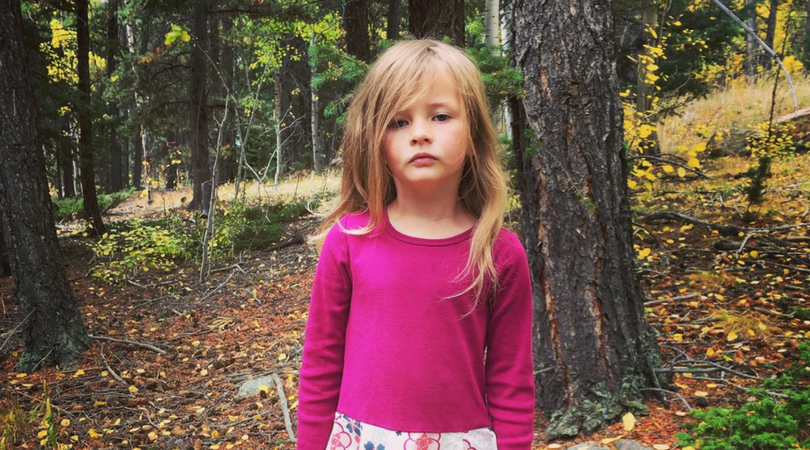 “She is six-years-old and she has no problem with looking me straight in the eyes and saying, ‘no.’

She does this often, for many different reasons. From not wanting to wash her face, eat her dinner, go to bed, clean her room, brush her hair, come inside, go outside, stop saying words for five seconds.

She doesn’t always get her way, obviously. She’s not rude. She always says, ‘please,’ and ‘thank you,’ at the appropriate times. She’s loving. She’s kind-hearted. She’s just very comfortable with saying no. To me. To anyone.

I’m much older than her, and I still have trouble telling people no, let alone looking them in the eyes and saying it.

Her ‘no’s’ have been the most frustrating part of parenting for me so far. That’s because I’m a rule-follower, an obliger, someone who doesn’t want to make waves.

I’m fine, everything’s fine. Don’t mind me. If I had a severed limb, I’d probably apologize to the paramedics for getting blood all over the place.

She is my opposite. And maybe I’m jealous. Jealous that she’s so SURE of herself. Of her place and the validity of her opinions. So sure of her no.

I wish I could always walk through the world knowing exactly what I want and telling everyone about it and then making it happen. Like she did last week when she decided to create a paper backpack. Her brother said, ‘that’s never going to work.’ But that thing works. It has a lot of duct tape, but it works.

She will wear you down when she believes in something strongly. She was so convinced that the Easter Bunny had left her candy at this specific place in the forest, that she talked for HOURS about it until her brother finally took her there. Hours.

Parts of me are so proud of her for saying no to me, and for wearing people down to get what she wants, that I could burst at the seams. Part of me is so completely frustrated and bewildered. She couldn’t care less that things aren’t ‘done that way.’

She is strong and opinionated and loud and talks too much. She is, at all costs, a self-promoter. She is also a fierce cuddler, an unrestrained artist, and, when she loves you, she loves you with all of her being.

She will walk into the world unafraid. She will probably get fired from jobs because of her ‘no.’ She will dye her hair blue. She might drive too fast. She will definitely sing too loud. She won’t ‘talk like a lady.’ And she won’t tolerate any man (or woman) telling her how things are supposed to be.

But she will also create stuff that could never come from a woman who is afraid. She will knock down walls and ceilings and possibly entire buildings with the force of her will. She will change the world because she is not scared to say no to you.

And I truly fear for the man who ever tells her to smile.

So, in the end, I want her to keep saying no. To me. To her dad. to her brother. To teachers. To boys. To bosses. To rules that she doesn’t believe in.

For all of you parents who are dealing with your own brand of girl warriors, we are in this together. If we can survive their childhoods, the future will be, indeed, female.”

This story was written by Jorrie Varney. Submit your story here, and subscribe to our best love stories here.