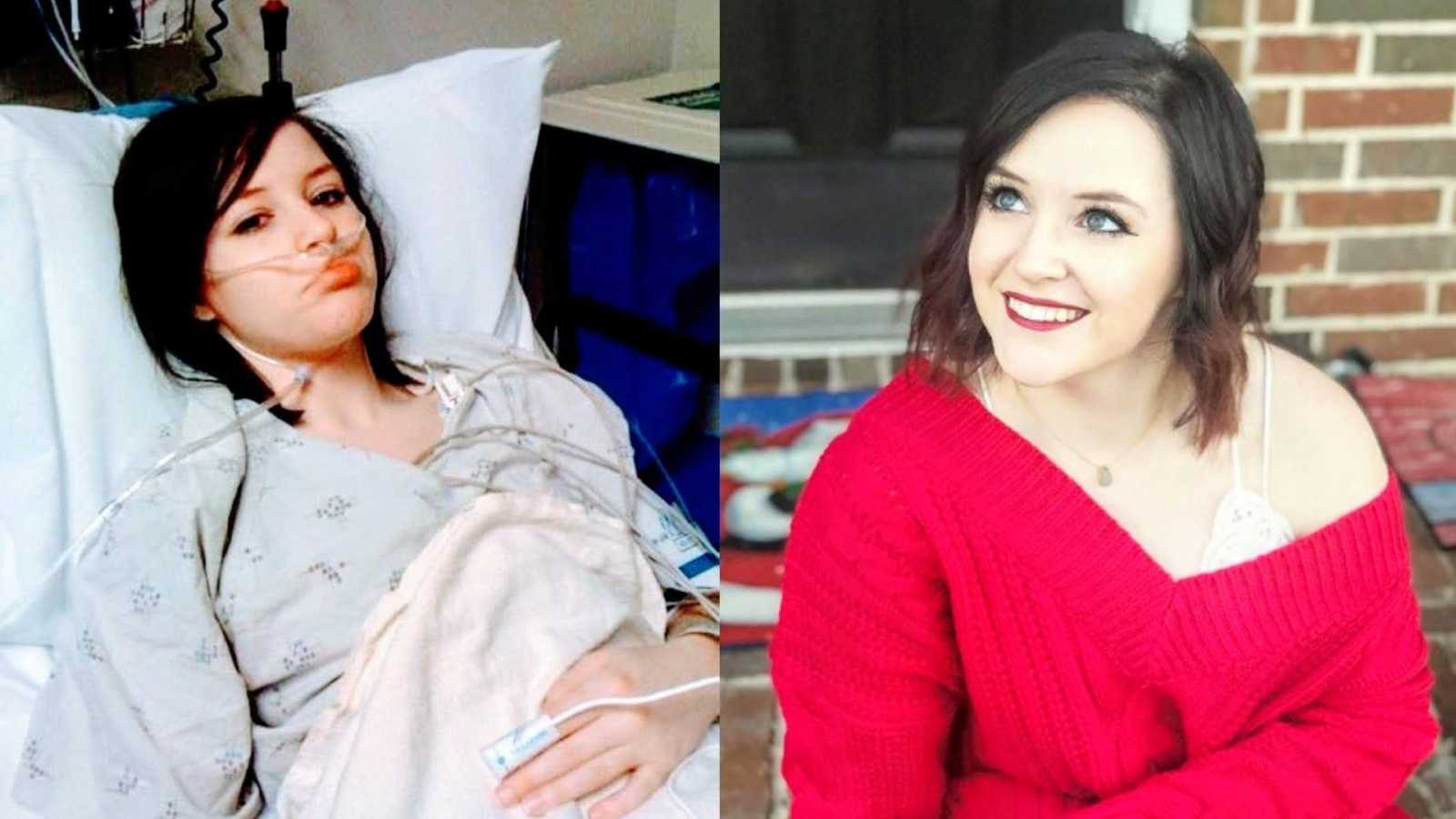 “She has to be exaggerating.

She must be dramatic.

All things that flash through my brain as I get rushed into the Emergency Room. Reassuring the doctors, I’m not an addict. I’m not an alcoholic. This was a common conversation I had to have. Constantly begging to be taken seriously by doctors who wrote you off is one of the things that haunt me to this day.

My story actually begins long before the diagnosis. After all, I never had the typical stomach problems associated with Celiac Disease. I was an all-star cheerleader and from the outside I seemed healthy by definition.

I was 17 when I had my first attack of Pancreatitis. After spending a week in the hospital, I was discharged and told this was a ‘fluke thing.’ As a precaution, I should go on a low-fat diet for a few months to give my pancreas a rest. I was never tested for Celiac Disease and it was never considered that something could be wrong. I tried to go back to a normal life while maintaining a low-fat diet, but I just couldn’t seem to be myself again. I was experiencing stomach pains, my hair was falling out, I was covered in bruises, barely 90 pounds and miserable. I had 8 sinus infections in a row and sport injuries that couldn’t heal.

Less than 5 months after my first attack of pancreatitis, it happened again. The pain is unlike anything I’ve ever experienced. One minute I was okay, the next I was blacked out on the floor and being assessed by the paramedics. We soon find out I was having another attack of Pancreatitis. After a couple days in the hospital, they had a Pediatric Gastroenterologist come see me. He took one look at me and said, ‘Sweetheart, you don’t look so good. We need to figure this out.’

After spending 10 minutes with me and asking questions, he said he thought I had Celiac Disease. I remember a flood of panic ran over me because I had no clue what that was. Celiac was not a common disease talked about yet. We did an Endoscopy to confirm and boy did it confirm! The inside of a healthy esophagus is lined with a villi that is usually a light pink color. My villi was gone and my insides were nothing but dark purple. There was so much damage, it looked completely burned. My blood work was atrocious too. My body was literally attacking itself and I wasn’t absorbing nutrients. My Celiac Disease genes were triggered but unknown and I was still eating gluten for months leading up to the diagnosis.

The doctor assured us I would have a new life, a healthier one. I just wasn’t prepared for what I was about to research on this disease. Gluten came in so many forms. It’s in everything! Deodorant, hairspray, tooth paste, makeup, even GLUE! It also has many different names. Most times you won’t just see ‘gluten’ listed in the ingredients. It could say barley, rye, oats, wheat protein, malt, and so many others. Thank goodness for Google, but it took a long time to not be completely discouraged by having to look up every product or food I came in contact with. Eating out was like a Russian Roulette game. Restaurants not taking me seriously almost put me back in the hospital so many times. Cross contamination is the ultimate enemy. One crumb of Gluten and you’re down for the count.

11 years ago it was not as easy to find Gluten Free items as it is today. You can go into any grocery store now and find food that actually tastes good! For this, I am thankful!

A couple years later into my journey back to health, I started having stomach problems again. I was strictly Gluten Free and I was supposed to be normal again; the doctor said I’d be okay. What wasn’t anticipated was all the inflammation my body had endured pre-diagnosis. It caused Cholecystitis, which means bile couldn’t flow from my liver to the duodenum. My gallbladder had to come out. A mild set back is what I told myself. I would be healthy after this! Unfortunately, that wasn’t the case either.

I was still experiencing stomach pain. After several ER visits and tests, it was determined all the inflammation pre-diagnosis had caused damage to my pancreas. Scar tissue had developed and clogged my Pancreas ducts. The procedure I needed was called Sphincter Of Odi. It was successful, but getting so close to the Pancreas brought on a full blown Pancreatitis attack. I remember lying in the hospital bed after 12 days, wondering if this is what my life would always be like. Would I always have problems? Was being healthy just too far out of reach? At this point, my Celiac diagnosis was 4 years ago.

But life started to turn around for me.

I was still navigating what it meant to have Celiac Disease. Reading labels, finding recipes, learning about cross contamination. Dating was awkward. Trying to explain why I couldn’t eat places or why I couldn’t be kissed after a meal because of cross contamination was always embarrassing. I eventually gave up trying to get people to understand me and this disease. It just seemed like everywhere I went I was being judged and assumptions were made. This wasn’t a ‘fad diet’ and there were no ‘cheat days.’ I wouldn’t just have a small stomach ache if I ate gluten. I would spend weeks recovering from a gluten attack that could potentially put me in the hospital.

Over the course of the next 7 years, I adapted to what I thought healthy was for me. I still experienced unknown stomach pains and nausea. ER visits were still a frequent thing. I’ve been told I have Chronic Pancreatitis, Ulcers and, Gastritis. All of these resulted from my prolonged diagnoses of Celiac Disease.

11 years after diagnosis and I have stopped eating out to eliminate cross contamination risks. I have cut out as many processed foods as I can. Clean eating isn’t as boring as some may think. I’ve had fun finding new recipes to try, but to be honest the best part is, after over a decade, I’m finally experiencing what healthy is. It took so long to reverse the damage Celiac Disease had caused and I wish more people knew this disease isn’t just a ‘food allergy.’

Today, I use social media to spread awareness. I like showing people they can actually eat yummy meals! Self-care is also a crucial part to this disease. It takes a physical and emotional toll on your body. It’s okay to need rest. It’s okay to feel sad or angry. Overall, I am now a well-adjusted, healthy adult who’s far too obsessed with her dog, but otherwise I’m good. Learning to accept this disease and its challenges has not been an easy task. I realized I don’t have to make people understand me or this disease for that matter. So many people are diagnosed with Celiac Disease every day. Each person’s journey is different from the next.

My journey has not been easy, but I’m so blessed to be able to share my story and help others going through this too.”

This story was submitted to Love What Matters by Chelsey Burton. You can follow her journey on Instagram and her website. Submit your own story here, and be sure to subscribe to our free email newsletter for our best stories, and YouTube for our best videos.

. Submit your own story here, and be sure to subscribe to our free email newsletter for our best stories, and YouTube for our best videos.

‘I was vomiting. My doctor said it was because I was ‘promiscuous.’ My mom had just hung herself.’: Woman with chronic illness claims pain won’t rob her ‘passion for living’

‘If you send me home, I will die.’ The doctor looked me in the eyes. ‘We’re all going to die.’: Mental illness, chronic pain warrior finds peace through therapy, ‘I accept myself as I am’

‘You have a tough road ahead.’ That was an understatement. I had to accept the possibility of dying before I really got to live.’: Chronic illness warrior says ‘I’ve so much to be grateful for’