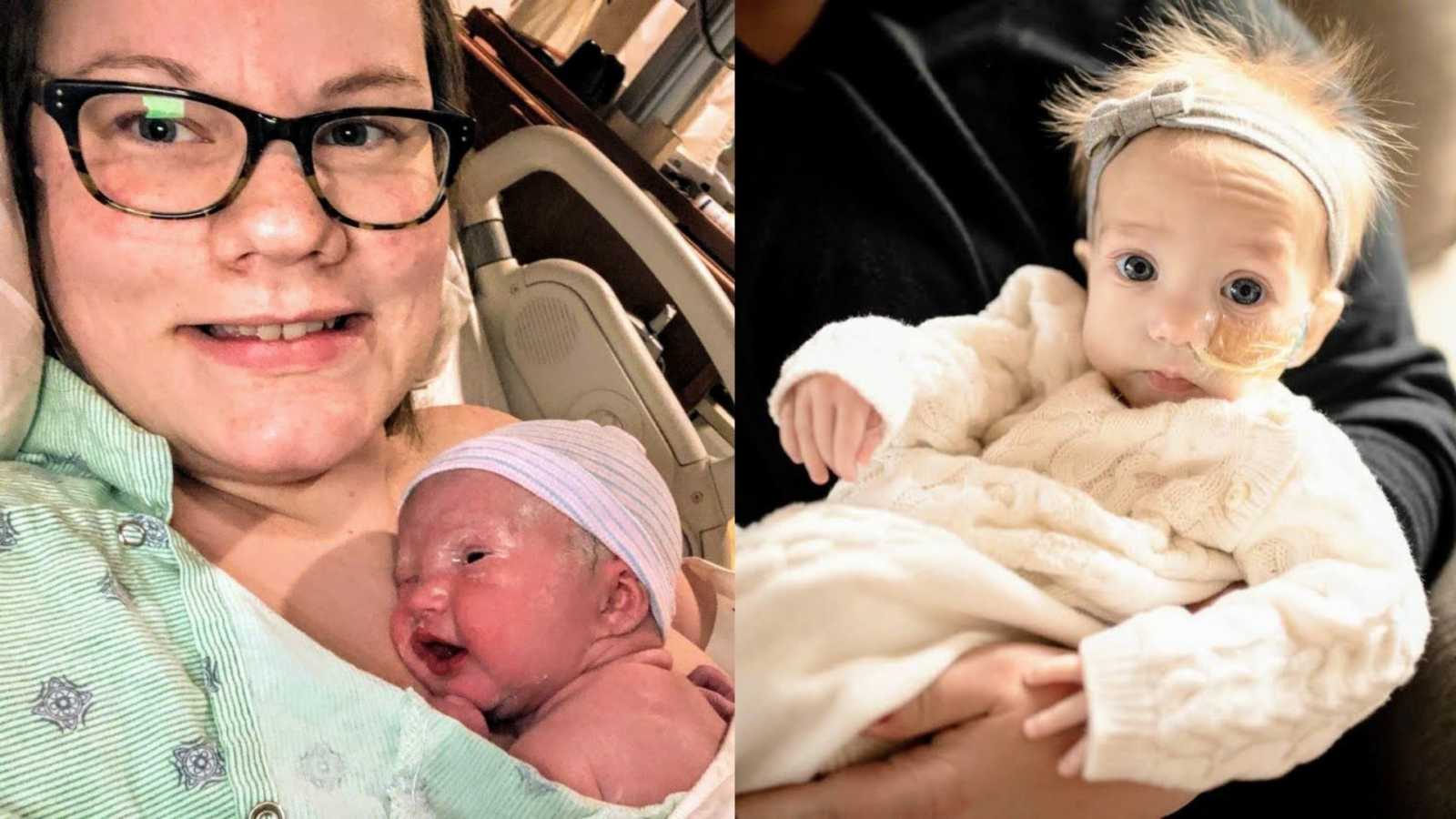 “I was a live-in nanny in downtown Chicago 11 years ago. I wasn’t sure what my future held, but I knew children would be a major part.

I met my husband while living downtown. I actually avoided his invitations for dates so many times he almost gave up. He decided to give me one more shot, and I decided to show up. Within two years, we were married and had a beautiful baby girl on the way. Within seven years, we had four beautiful, perfect children. Three are healthy, one is not.

My pregnancy with Felicity was so unexpected. After our third child, we were done. At our max. Tapped out. Discovering I was pregnant brought about a range of emotions unlike anything I’d ever experienced. Fear, joy, sorrow, terror, happiness, excitement, grief. All rolled into one very complex package. I had no idea Felicity was exactly what our marriage needed.

Felicity was born on a fairly warm (for Chicago) February day. She came into the world silent, much like her siblings. My children all like to scare me at birth, by coming super fast and appearing silent and ‘stunned.’

This time was different though. Felicity breathed very fast. Loud. She struggled to nurse. And, she felt like a wet noodle. I couldn’t put my finger on it, but she was just different. From the very beginning. I shook it off as exhausted mom of four nerves, and went home with my beautiful little girl, knowing my family was complete.

The problems started to pile on. I had successfully nursed three other babies, but I could not get the hang of it with her. She choked, coughed, vomited, and developed loud, noisy, and labored breathing. She didn’t grow as fast as my other babies had. She was wearing preemie clothing and diapers at four weeks old, despite being born a healthy weight. She had excess skin around her neck and arms. She didn’t make eye contact. She often appeared to be staring off into the distance at nothing. She was so unlike my other babies. ‘They are all different,’ I told myself.

The pediatrician diagnosed her with a cold. Allergies. Reflux. Colic. For six weeks, I knew there was something off, but no one piece was severe enough to make a big deal out of. At six weeks old, her breathing became more worrisome. She had spells of turning blue in the face. She sounded like a baby piglet and struggled. The skin around her neck sucked in with every breath.

I took her to an emergency doctor appointment and was immediately sent to the hospital. In the ER, she was diagnosed with pneumonia, and we were admitted. She had an episode during that admission where her oxygen saturation dropped and a few additional tests were done. Unable to find much, we were sent home assuming this was very bad reflux, and medication would solve it. We were wrong.

Two weeks later, we were in the ENT office. The breathing episodes had gotten more frequent, and her weight was falling off her curve. He decided to admit her for further testing.

It was during this admission genetics became involved. Neurology. Cardiology. Her tone was low. Her weight was falling. She vomited frequently. She was aspirating breast milk. She was placed on tube feedings and sent home, while we waited for further genetic testing. I assumed we’d arrive at an answer easily. I was wrong again.

My baby had been in and out of the hospital. She wasn’t growing, thriving, or meeting milestones. She didn’t roll, smile, or hold her own head up. She was four months old and much like a brand new baby.

Six weeks later, she was hospitalized again. Her weight was completely stalled. She was placed on a different type of tube feeding. She lost weight during admission. Further genetic testing was initiated. We were once again allowed to go home and wait.

This round of testing yielded an answer. Except it never made sense. It never fit Felicity’s presentation. Some pieces did, some did not. This was the major turning point for her. I think if I had accepted this diagnosis, she would be dead already. The diagnosis was considered fatal, and I don’t know that the aggressive intervention that has followed over the past nine months would have occurred had I accepted that diagnosis.

I pushed. I asked questions. I researched. For the first time, I listened to my gut. I knew it wasn’t correct. Follow up testing has revealed I am correct. The diagnosis initially given during genetic testing was incorrect.

Desperate, I reached out to a geneticist in Atlanta, who is well known for solving mysteries. We traveled there in October. She gave us a new possible diagnosis, and several ideas for testing. While that diagnosis was also incorrect, the testing began to set us on the correct path.

In November of 2019, Felicity was hospitalized again. At this time, she had a muscle biopsy and a central line placed to begin IV nutrition. Her growth had completely stalled, and we needed to make a change to save her life. The muscle biopsy was used to prove the initial genetic diagnosis was incorrect and test for other diseases.

Results began to roll in. I heard the phrase ‘abnormal but not diagnostic’ so many times. Every time the geneticist would call, I would feel rage, knowing that irritating phrase was likely coming. Blood tests, muscle tests, none of it quite right, but nothing standing out as a unifying diagnosis.

I wish I could tell you our story has a happy ending. Felicity is now 16 months old, 9 pounds, 24 inches. She can’t sit, crawl, or even hold her head up, on a bad day. She is exclusively dependent on TPN and oxygen. She is, in most ways, a newborn.

What I can tell you is to never ever give up. I have had the head of the National Institute of Health Undiagnosed Diseases Network Program on the phone with me. I have gotten personal responses from world renowned physicians from the Mayo Clinic, the Children’s Hospital of Philadelphia, and many others. I have pushed, asked questions, and made tough choices. I may not have an answer yet, but I can tell you this: I know, without a shadow of a doubt, I have done everything I could to advocate for Felicity. I have stepped outside my comfort zone and found my voice. My daughter doesn’t have a voice, so it is my job to advocate for her, and I will never stop.

I have sat in doctor’s offices and heard that my sweet baby is likely going to die, more times than I care to mention. Life expectancy isn’t something any parent should ever have to consider. I no longer fret about milestones being missed. The quality of her life is my focus. We work daily on skills to her tolerance, but after 16 months of fighting, I am also taking time to enjoy my sweet baby girl. She will do what she will do on her time.

I do not know what the future holds for Felicity. We have more testing and research in the pipeline. But, I do know she is loved beyond measure. She has taught me to stand up and speak. She has helped me to follow my gut. She has shown me how far past my limits I can go. I am strong. I can do anything. I will stop at nothing. I do advocate every chance I get. Above all else, I choose love. Someone once told me, ‘Hope dies last.’ I have a lot of it.”

This story was submitted to Love What Matters by Nikki Patrick of Chicago. You can follow their journey on Facebook. Submit your own story here and be sure to subscribe to our free email newsletter for our best stories.

‘Come feel this,’ the doctor said. I put my hand on her belly. My heart sank.’ Mom recalls daughter’s rare cancer diagnosis after thinking it was just an ‘umbilical cord hernia’