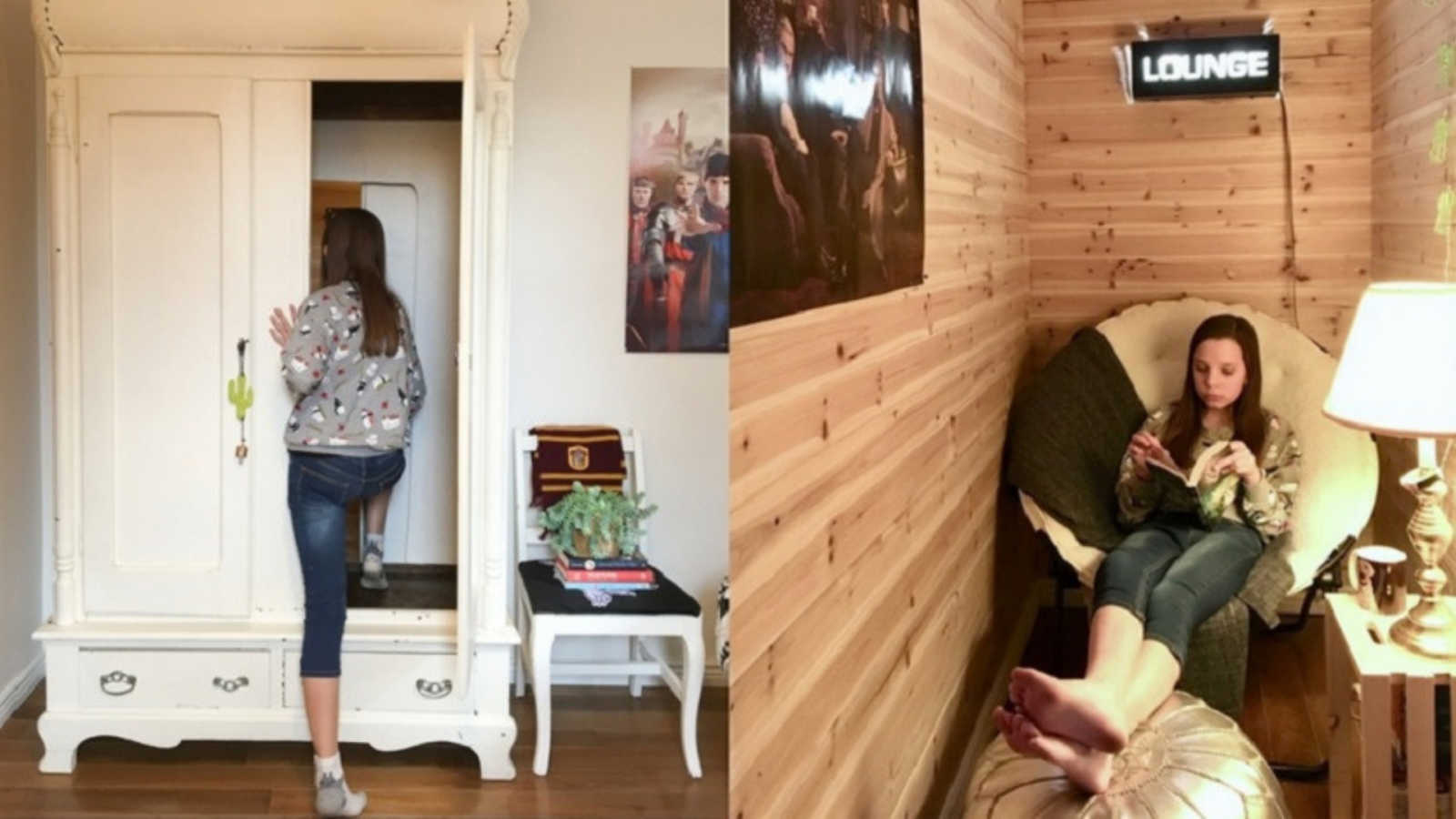 “I am an only child, and am also a parent to an only child. For me, being an introverted only child led me to live inside my head a lot. I had magical thoughts and feelings about places and ideas about hidden worlds that were there if you just looked hard enough.

I think that children are able to instantly access that part of their mind where they can flip reality upside down and really walk into a thought and a world that is not accessible to most adults who are, by necessity, living in the ‘real world.’

This ‘looking at the world differently’ is something that is still quite important to me and I would like it to be so for my daughter. Sylvia is a person who loves Harry Potter, Merlin and Sherlock Holmes (among others) and magic, mystery and fantasy really speak to her. Having a secret area that’s just hers is something that fills her with delight.

I told Sylvia my idea about the secret closet room and she got so excited about it that I knew there was no turning back. Then I had to explain it to my husband (quite a few times) so he could help build it!”

Medicus explained how to make her DIY (budget friendly) hidden room behind an armoire:

“We took an existing closet from our bedroom, walled it off and created an opening to it in Sylvia’s room (she previously had no closet). Just for fun, I placed an armoire in front of the door opening. I took part of the back off of the armoire, and now she can enter through the furniture to access her fun secret hide-out/closet!

Make sure the armoire is either anchored to the wall or completely secure. If it wobbles when you or your child gets in – fix it before you go any further.

Our home was built in 1938 just before the age of built-in closets. We have a closet in our room that was added when a homeowner at some point decided to get rid of a third bedroom and create a giant master bedroom, but Sylvia’s room has no closet.

Here’s a “Before” plan view:

Sylvia and I have always been excited about hidden, small places and I had the idea of putting her huge, antique wardrobe in front of the new closet opening and creating a secret spot for her that would be accessed through the wardrobe (thank you C.S. Lewis for the original idea).

I know she probably has three years (tops) of enjoying this before we will probably just tear the wall down and make her room bigger – but I’m excited for her right now.

It’s been in near constant use ever since it first became ‘livable.’ She reads in there, has talks with her best friend there and watches some TV on her iPad in there, as well as stores her clothes in one part of the area (oh yeah, this was meant to be a closet).

I think she’s got a few years of enjoying it like this and then we’ll move the armoire and set it up as a ‘normal’ closet. For now, it’s pretty fabulous and it’s very budget friendly. Nothing here was a splurge.  My philosophy was to make it work for right now, but not at the expense of having to undo much of anything when she outgrows it.

This project was about looking for small moments of delight in everyday life. Things don’t have to be normal or expected.”

This story was submitted to Love What Matters by Laura Medicus of Laura Medicus Interiors in Denver, Colorado. She originally featured her secret closet creation on her blog. Submit your story here, and be sure to subscribe to our best love stories here.

SHARE this story on Facebook if you love DIY projects and want to encourage the power of imagination. Yes, We Vacation Alone—Because In This House Full Of Kids, We Put Our Relationship First

“Someday our kids are going to leave us…they’re going to go out and create their own lives. And when they do, if we’ve never put our relationship first, we’ll be left with nothing.”