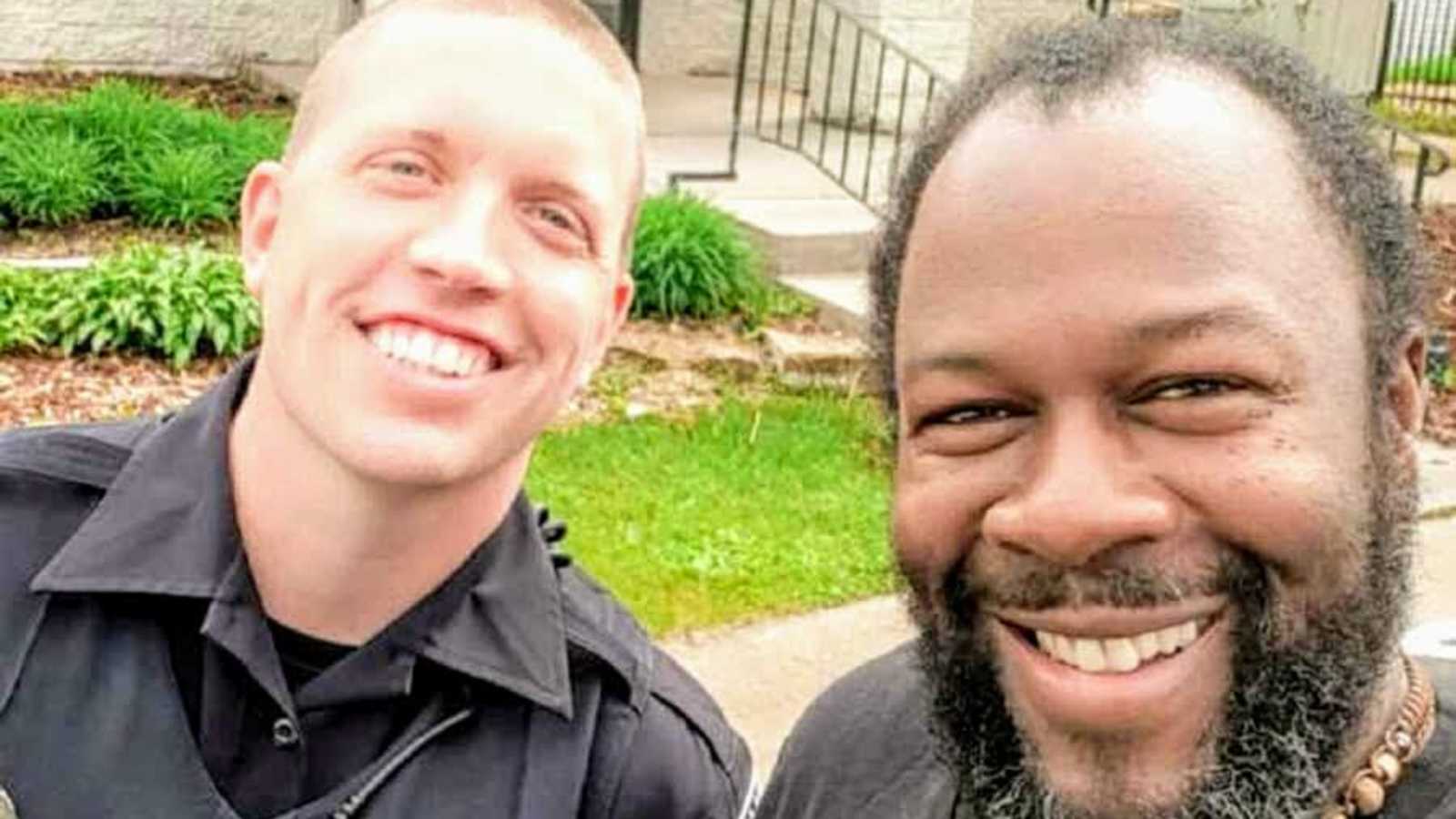 “May 25th, 2020 was my 10-year anniversary of becoming a cop. In the first picture, my wife is surprising me with a cake and my son is helping me blow out the candles. It was an important day for me, because – as most of you know – I’ve always wanted to be a police officer. As soon as professional hockey player and R&B singer were no longer options, there was no other choice for me. I went to college, joined the army, served in Kuwait/Iraq, all to be better prepared for becoming a police officer.

When I moved back to Minneapolis, I was certain I would be a cop for MPD, but due to the financial crisis, this wasn’t really a possibility. Not many places were hiring so I applied anywhere I could. When Columbia Heights gave me the job, I was thrilled. Not only was I working for a diverse city, but I was literally working on the border of Minneapolis. For the next ten years, I learned what it was to truly become a police officer. It wasn’t about the tickets and the arrests; it was about the partnerships you made. Don’t get me wrong, I love the action of the job, but it’s not what fuels me to make this world a better place.

On the same day as my 10-year anniversary, officers from the Minneapolis Police Department murdered George Floyd. There’s no other way to put this; this was a murder. I’ve watched the video so many times now, just trying to find some justification for the actions these men took, but I can assure you there are none. I watch this video and I get angry and I get sad and I clench my teeth and I hold back my tears and I ask, ‘Why!?’

I say this not only as a police officer, but as a white man in America. I understand the pain it causes me even if I don’t understand the reason for this violence. What I don’t understand is the pain and fear it must cause all people of color, especially black men. We live in two different worlds and no matter what I’ve done while I’ve worn this uniform, this has not changed. I may have changed moments, but I have not changed the world like I thought I would.

Today was my first day back since this incident occurred. Last night, as my wife and I lay in bed, I could hear the flashbangs going off at the 3rd precinct, less than a mile from my house. Today I got out of bed at the last possible second and barely made it to work on time. I was dreading putting on my uniform, but I did it because that’s what I do. I’m a police officer, in good times and bad.

My second dispatched call of the day today was a phone call. I called the number and a man named Calvin answered. Calvin said he was a health inspector and he would be inspecting some neighborhood homes today. Calvin said, ‘I’m a big black man with dreads,’ and he wanted to make sure that police were aware in case we got a call about him walking around the neighborhood. Calvin asked that I come out there to verify his employment so I could squash any calls before they became something bigger. I obliged and I apologized to him for this even being necessary, but I told him I understood. Anyway, I arrived, and we exchanged pleasantries when I noticed he had an Omega Psi Phi bracelet on, which is a black fraternity known as ‘Q.’

I told him my roommate in college was a Q, making the hand gestures, and that one of my officers now was a Q. Calvin smiled, I smiled, and suddenly the apprehension in the air immediately dissipated. He ended up knowing my college roommate pretty well, and we decided we would spend the next hour walking the neighborhood together. Calvin was about 15 years older than me, but we talked about how we both loved to travel and about our kids. We spoke about George Floyd and police brutality, and how it’s a different world for black men. We talked about the importance of getting to know people and how racism is borne of fear and ignorance. Calvin spoke and I listened.

This second picture is of me and Calvin. At the end, we both said almost simultaneously how much we needed this today. We were both hurting, and this was a small ray of light into a darkness that had covered us. We would have hugged but, being that we both believe in doctors and science, we elbow-bumped instead. We exchanged information and took this picture. An hour later my old college roommate texted me saying he heard I met Calvin and how happy that made him. Calvin then texted me a few hours after that saying that he believed things happened for a reason and that we would see each other again. I believe him. I’m not a religious guy and I mostly chalk things up to chance, but it really seemed that the universe was communicating today – at least to Calvin and me.

I’m not writing this to tell you that everything is going to be okay. I honestly don’t know if it will be. I have hope, otherwise everything I’m doing would lose meaning. I’m not telling people to not be angry or to not protest. Black people should be angry. White people should be angry. I’m angry. I’m just writing this to tell you that I love you all and that I’m here to listen to you, whenever you’re ready to talk. If you’re black and hurt and you don’t understand policing, I’m here to listen. If you’re white and you feel lost and you don’t know how to use your voice, I’m here to listen. I’ll answer what I can, and when I can’t we’ll work together to find the answers.

We need to listen to each other. We need to support each other. I’m only as good of a police officer as my community says I am. If my community doesn’t trust me, I need to listen. If my community fears me, I need to listen. I met Calvin today and I listened, and because of this, I gained an ally and a friend. I know enough about change to know that you can’t tell people what to do, you need to listen to them and build change together. So please listen to me for this brief moment as I tell you this one thing: I’m here. Not for you, but with you. I am, have been, and will be a member of this team. Our team. I’m here. As both a police officer and as your friend. So, speak. I’m listening.

This story was submitted to Love What Matters by Justin Pletcher. You can follow their journey on Facebook. Submit your own story here and be sure to subscribe to our free email newsletter for our best stories.

‘It was a long time ago. Get over it!’ The victim, I thought my family would hold me. Instead, I was blamed.’: Woman details healing journey after revealing brother’s sexual abuse

“I sent my brother an email. ‘I was a wake last night.’ He never came into my bedroom at night again. When it came time for my wedding years later, my mom insisted I do things ‘her way.’ She wanted my brother to stand beside my husband. We danced around it, but nothing worked. I had to tell her what my brother did to me. ‘How could you do this to us? You’re tearing our family apart,’ I was told. For years, I tried to navigate this deep, dark pit and find light. She threw me back into the dirt.”

‘This is CRAZY, but the judge just signed the order to move your son’s sister to your home TODAY. I’ll be there tonight.’: Woman adopts 3 siblings, ‘We became a family of 5 overnight’

“I asked John how he felt about adopting. ‘I just want to be a father, no matter how children come to me.’ We became a family of 5 overnight.” 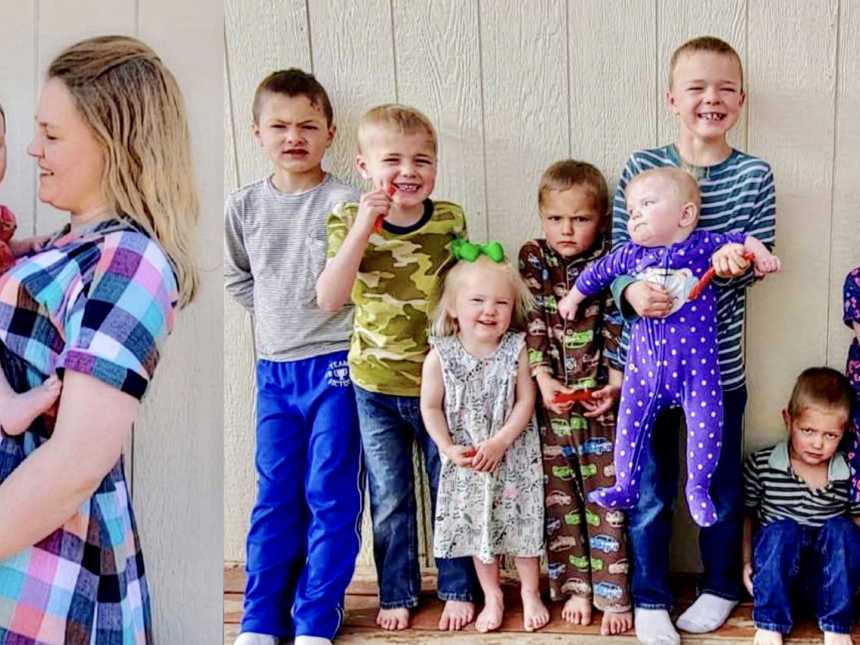 “We get asked at times whether or not we plan on having more children. The honest truth? I still get thrilled with each positive test.”