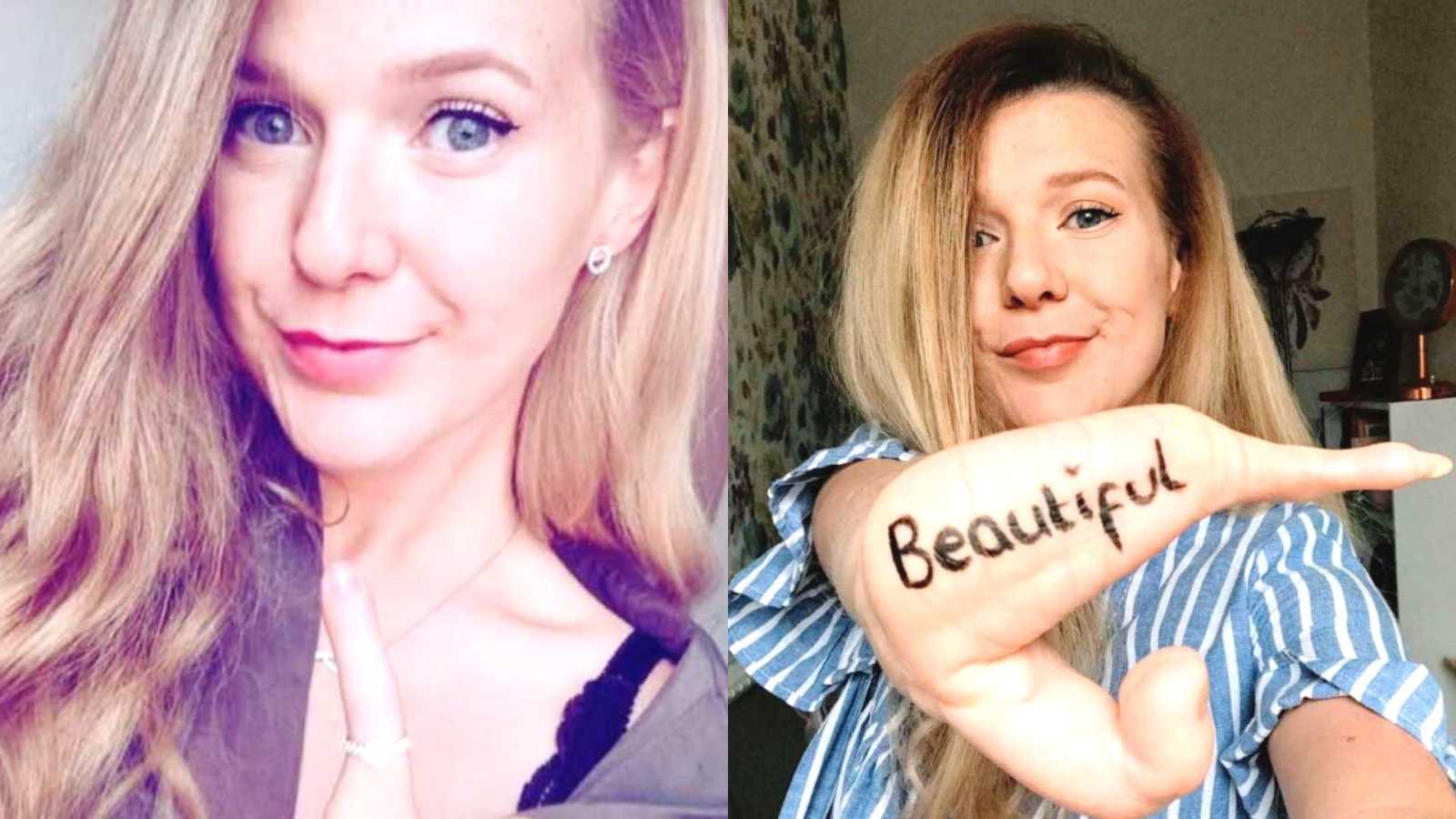 “I was born with a limb difference on both my hands and feet, also known as Ectrodactyly. For me, this meant I was born with one finger on each hand and two toes on each foot.

My physical difference was not detected on any pregnancy scans so it was a complete shock to my family when I was born. Following birth, genetic specialists confirmed it was caused by a defect in my DNA, chromosome seven. It could not have been avoided. There is a 50% chance I will pass this on to my children.

My parents had a consultation with a pediatrician when I was just 4 weeks old. They were told it was doubtful there would be anything they could do for me. This was very distressing for my family. They feared I would struggle in life and not be able to walk or live independently.

At 5 months old, I saw Professor Simon Kay, a plastic surgeon and hand specialist. It was decided I would undergo surgery to have a ‘toe-to-hand’ transplant. They would remove a toe from each foot and attached it to my hand to create a thumb. This would enable me to use my hands to grip and pick things up like a knife, fork, etc. They were also optimistic I would still be able to walk, even with just one toe on each foot!

The waiting list for surgery was incredibly long, my first operation took place when I was just 2 years old. It was successful and I was taking steps just 6 days after surgery. However, I contracted a nasty infection in my foot wound, which had gone unnoticed for over a week. My mom kept journals of the whole process and made regular entries, detailing the whole experience. Writing about my infection she noted, ‘It was absolutely horrendous, it looked like her foot had been eaten away.’ Luckily, it was caught in time and was cleared up with some antibiotics. The journals are so raw and honest. It has been emotional reading them back from my mom’s perspective and understanding all the trauma she went through. I had multiple operations between the ages of 2 to 4 to transfer my toes to my hands. It was not a simple one-time operation.

As a toddler, I was so happy! Always playing and dancing around. There really wasn’t much I struggled to do. I was so independent, I could draw, walk, dance, and feed myself. Up to the age of 11, I was confident and never really saw my limb difference as a massive part of who I was. 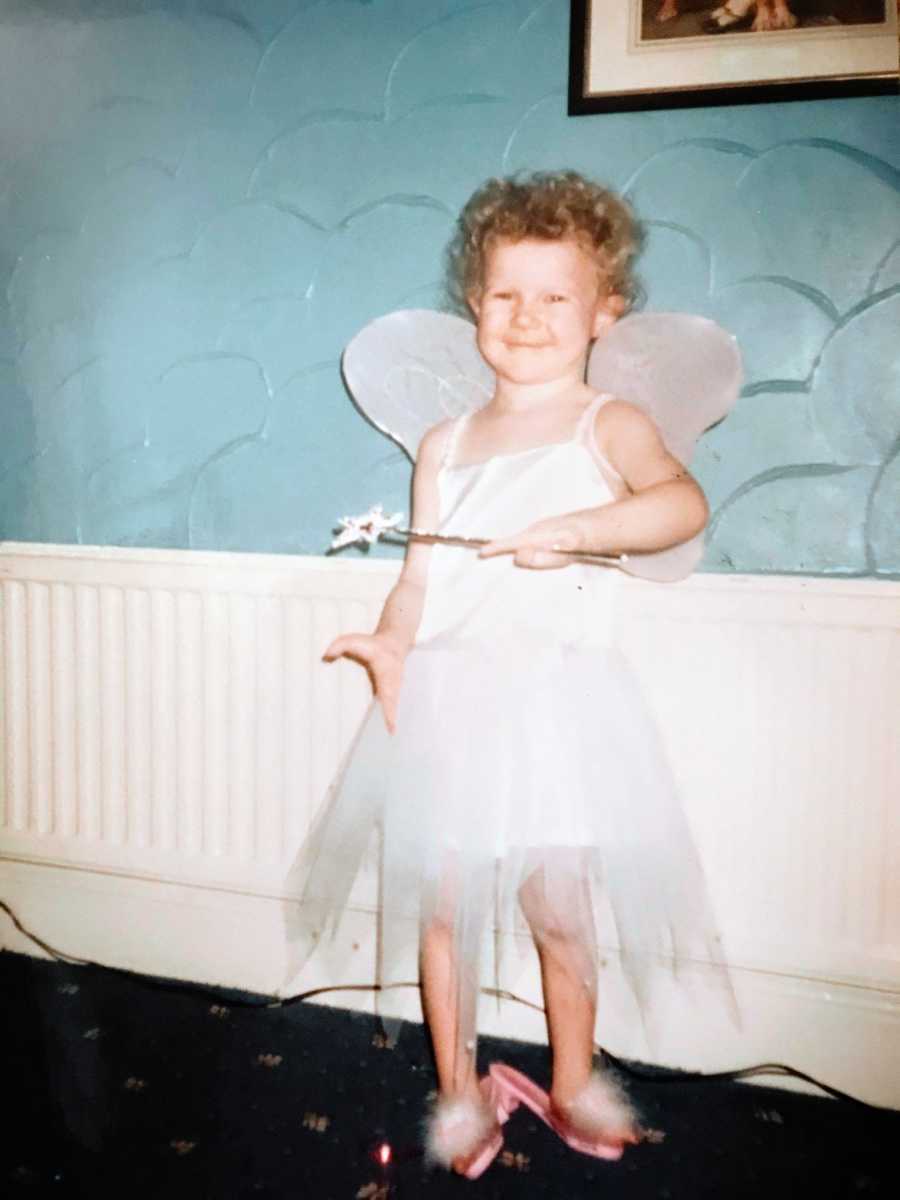 I was told I would never be able to drive, swim, write, draw, or even wear a ring. I proved ALL those things wrong. Having a limb difference does not limit your capabilities. I never let anyone tell me I couldn’t do anything. I’ll be the judge of that.

Starting secondary school was when my difference became a real issue for me. Moving to a bigger school with more people was daunting. There was a pressure to be liked and a desire to be ‘popular’ at that age. I was terrified I would have no friends due to my physical difference, I was convinced I would be judged based on my hands and feet and nobody would want to associate with me. I felt like a turtle hiding back into its shell. I made every effort to conceal my hands. I would cover them up by pulling my sleeves over them. I would never raise my hand in class to answer a question out of fear my classmates would see my limb difference. I dreaded being asked to come up to the front of the class to write on the board. In the summer months, I would still wear my cardigan to hide my scars and hands, despite being too warm.

School skirts were a massive NO for me. I would never wear anything that revealed my feet or legs. I wanted as little attention drawn to me as possible to avoid the chance of someone noticing my limb difference. My self-esteem was at an all-time low and I was extremely self-conscious. I felt unattractive and my hands and feet were always at the forefront of my mind. I let the negative thoughts consume me. I wanted to be ‘normal.’ There was no representation of limb difference in the media. I had no role models with disabilities to look up to. I felt inferior to my friends because I had ‘less’ than them.

At the age of 13, I decided to get some prosthetic feet made for me. I was SO desperate to feel ‘normal’ and have five toes. All my friends were wearing gorgeous heeled shoes and it was something I couldn’t do. I just wanted to fit in and as a teenager, you think that is the most important thing to do! However, the prosthetic feet were unsuccessful and were not practical for me. I continued to struggle with my body image through school and college.

On a random August night in 2014, I met Alex, my now fiancé. We chatted and connected instantly. Alex took my number and wanted to take me on a date – but all I could feel was fear. I was beside myself with worry he would notice my limb difference and would want to run for the hills. I’d met this amazing boy and my mind was telling me, ‘No, don’t do it!’ I had a fear of being rejected because of my hands. We met up a few times, and I tried my best to conceal my hands like I had done the whole way through school. Little did I know, Alex had already seen my difference and it didn’t phase him at all.

I struggled for a while to accept the fact someone could find me attractive and wanted to date me – this contradicted everything I had been telling myself for years! I was always waiting for the ‘catch,’ waiting for something to go wrong because this was just too good to be true! Fast forward to 2020, we own our first home together, we’re engaged, and I’ve never felt so comfortable in myself.

At the start of 2019, I decided to start an Instagram page as a way to document my journey to self-love in the hope it would encourage me to keep going. I knew I needed to stop hating myself and the limb difference I was born with. A switch flicked in my mind. This was no way to live, concealing my differences, and being ashamed of myself.

My online diary was such a turning point for me. Through the magic of the internet, I connected with thousands of other people just like me! Up until creating my blog, I didn’t know anyone with Ectrodactyly. I felt so isolated and alone like nobody truly understood how I felt. Instagram provided a community I never knew existed.

Reading other people’s stories and seeing photos of other people celebrating their differences really inspired me to do the same. I found the confidence to post photos showing my hands and feet, which I honestly believed would be impossible. Over the past year, my following has continued to increase and I am now a limb difference advocate. I am an ambassador for the I Am Possible Foundation, where I spread awareness around being different and encourage self-love.

Spreading awareness of limb difference is something I’m so passionate about. I receive SO many messages from people who have a similar condition, thanking me for posting photos and encouraging them to do the same. I have spoken to 40-year-old women who still hide out of fear of being judged. Representation of limb difference in the media is incredibly important. If I’d have seen positive disabled role models in the media as a teenager, it would have had such a beneficial impact on my mental health and the way I perceived myself.

I will continue to raise awareness and try my best to encourage others to celebrate their difference by telling my story and being honest on my social media platform.”

This story was submitted to Love What Matters by Shannon Crossland from West Yorkshire, UK. You can follow her journey on Instagram. Submit your own story here and be sure to subscribe to our free email newsletter for our best stories, and YouTube for our best videos.

‘His arms and legs, are they there?’ I couldn’t look at his picture.’: Mom says son with limb differences is ‘exactly who he is supposed to be’

‘We noticed some things about her hand and foot.’ Mom found doctor after doctor, even when they couldn’t do anything for me.’: Woman advocates for limb differences, ‘I tried until I got it right’