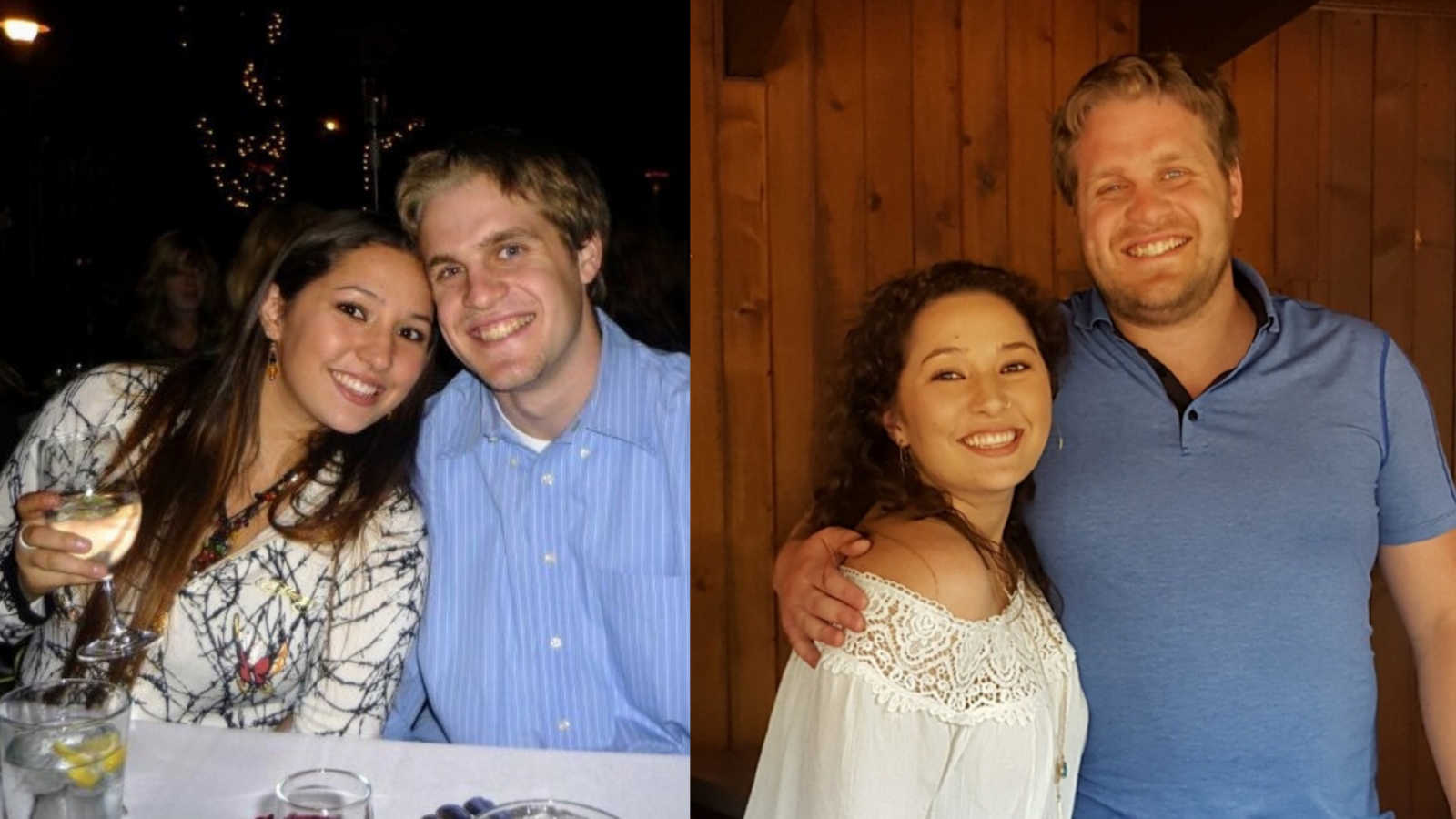 “I have never been crazy about kids. I’m good with kids, but never did I think I would be cut out to have my own. My dream was to live in the middle of nowhere in a small cabin with my dog, my horse, and my truck raising cattle. I never thought about falling in love and I was perfectly happy with that dream. Then came TK. I knew he was always meant to by mine. He is my balance, my soul’s counterpart, my best friend. We were together for 7 years before we got married and married for 2 1/2 years before I finally caved and agreed to try for kids but only under two conditions. First, that if we couldn’t conceive naturally, we wouldn’t go to great lengths to have a baby. No IVF, surrogates, medicine, calendars, or anything else. We don’t believe it forcing something that nature says isn’t meant to be. Second, nothing in our sex life would change. I didn’t want sex to become chore or to live our lives by ovulation calendars. If we were going to have a baby, it was going to happen during a normal, intimate moment.

We had finally decided to let nature take its course at the beginning of January and in my mind, I was sure it would take a few months to get pregnant. Enough time for me to really wrap my head around becoming a mother. Nope! I got pregnant two weeks after we had decided to try. I wish I could say I was happy, but the truth was, I was devastated. I didn’t think it would happen so fast and I felt like I didn’t have enough time to come to terms to let go of my pre-baby life. Add to that I was horribly sick and hormonal. I cried tears of sorrow every day. I was so unhappy. No joy. 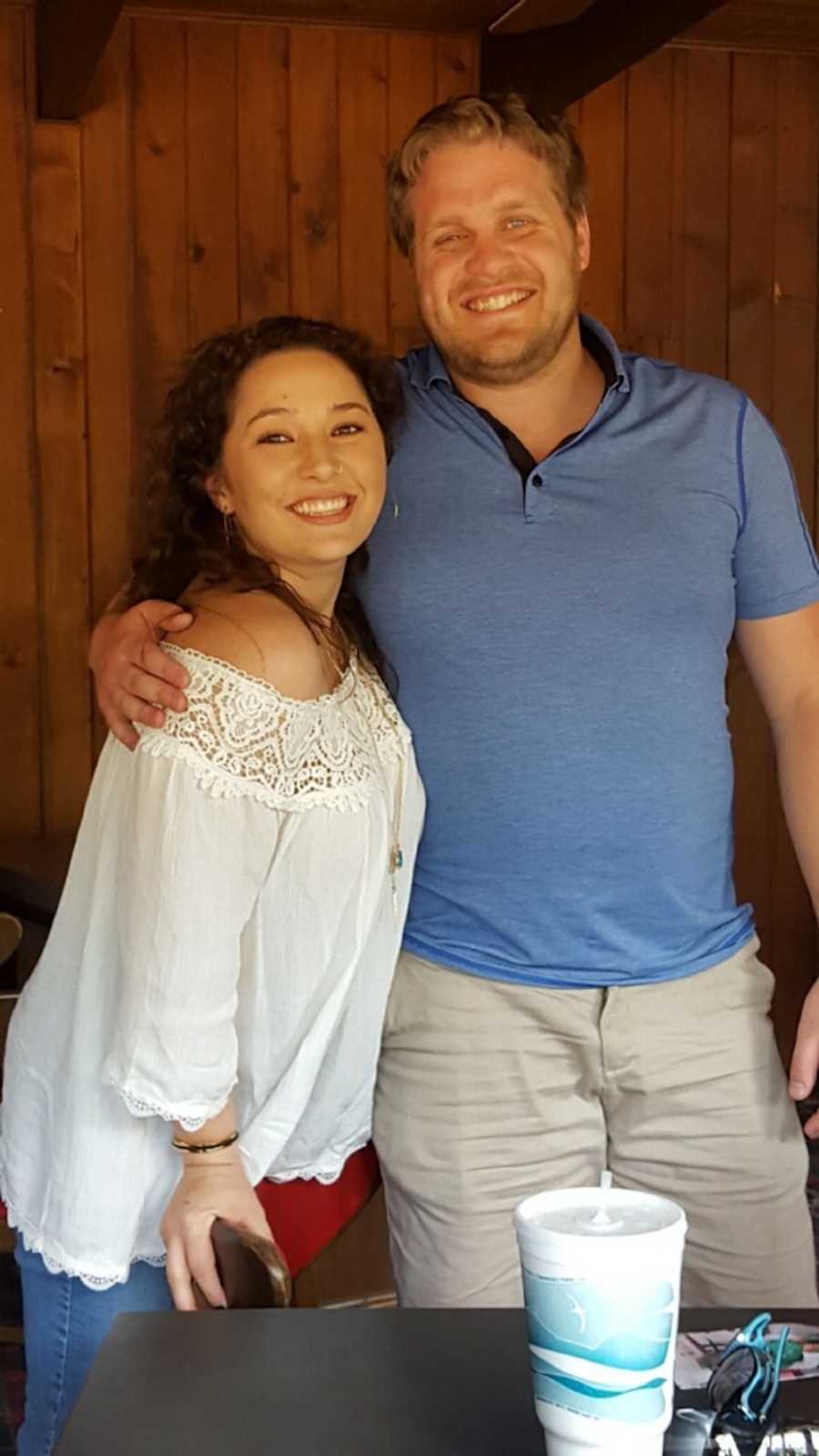 When I went to the doctor, they confirmed a viable pregnancy at 8 weeks. At my 10-week appointment there was no fetal check, just a meeting to go over all of my health history. At my 12-week appointment, TK came with me for the first time to see our little baby. During the appointment, my doctor looked on his little hand-held u/s device, didn’t say much, wiped my abdomen and asked us to go to another room where the large u/s machine was. There, his nurse practitioner turned on the screen, looked around and said, ‘I’m not seeing what I should be seeing. You’re 12 weeks along, but it looks like the baby hasn’t grown since the 8-week mark.’ I work in veterinary medicine, so I was in a very medical frame of mind. I just blurted out, ‘Oh, well that’s a bummer.’ In my head, it was all so medical. I wasn’t looking at my lost baby. I was looking at a non-viable fetus. To this day, my husband says that if I hadn’t kept my cool, he would have lost it. I had suffered something called a silent miscarriage where the fetus is gone but the body doesn’t recognize the lost pregnancy. We had to call our family and tell them the news. They took it much harder than we did or at least harder than I did. All my mom wanted to do was hug me. It was very smothering.

My doctor gave me the option of taking medicine to expel the fetal tissue at home or to have a D/C. I elected the surgery route. It was the fastest, easiest way to get this whole thing over with. It wasn’t until a few days later that the mindf$@k really hit. I was disgusted that I had been walking around for 4 weeks with a dead baby inside me, all the while I was puking, and my tummy had grown. I felt so betrayed by my body. If I had miscarried naturally, I don’t think it would’ve been as bad as it would’ve indicated that my body knew what it was doing, but it was the worst 2 days between learning the baby was deceased and having surgery. I think it was hard for my husband to look at me. I couldn’t look at me. I felt like monster. I cried silently for so many nights. I had been so unhappy when I thought we were having a baby and now in a cruel twist, I was devastated at its loss. I felt like I couldn’t admit all my complicated feelings to anyone. Everything was discombobulated.

We told our family not to pity us, talk to us about it, or treat us like fragile pieces of glass. All that sensitivity only made us feel worse. We just wanted to go back to normal and leave this dark memory behind us. I only took 1 day off work, had surgery on a Friday and was back to work on Monday. Yes, we had been knocked down, but we decided we weren’t going to stay down. We told everyone we were going to pick ourselves up, dust ourselves off, and try again. And that’s exactly what we did. We had to wait a couple of months before we could try again, and I used that time to think. I did a lot of soul searching and came to a wonderful realization. After 29 years of thinking I didn’t want children, my mind and heart had changed. I realized that I did want a baby. I was ready to be a mother.

Once we were given the all clear to try again, it took only 3 weeks before I became pregnant again. But this time, I had no tears of sorrow. In fact, my husband and I didn’t really acknowledge my pregnancy until after my 10-week appointment (I made the doctor’s office do an ultrasound because I was not going through that same crap again). But once we had made it past the gestational period of when we lost our first baby, I was full of joy. I sobbed after that appointment when I knew in my heart this pregnancy was going to stick. I didn’t mourn the life I would be giving up to be a parent. I was ready to close that chapter of my life.

We found out we were having a boy and Holden was born the following year in March. He is absolutely perfect, and my husband and I wonder how we ever lived life without this light in our lives. 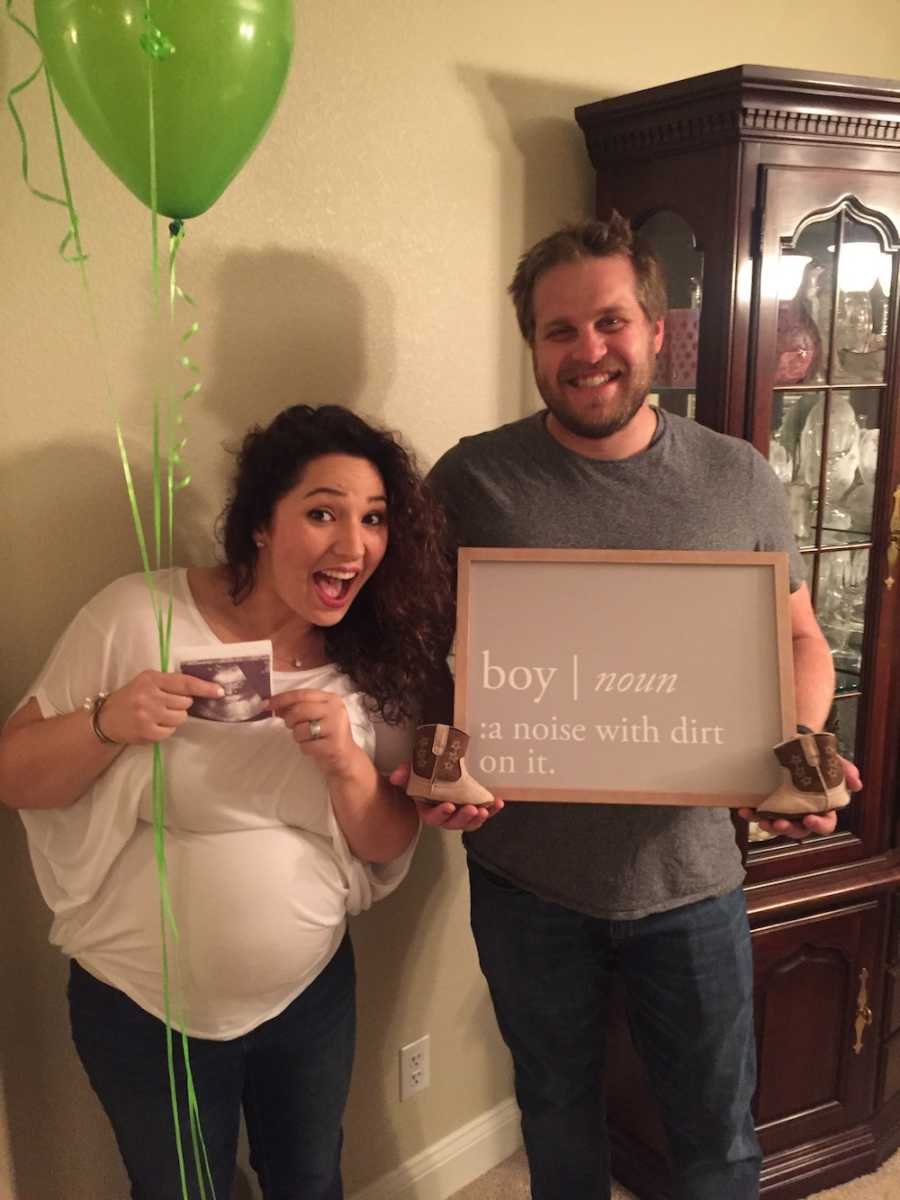 People have tried to refer to him as our rainbow baby and I am quick to shut that down. I don’t consider the fetus we lost at 8 weeks as losing a child. We are firm believers that nature knows what it is doing. Holden was meant to be, and I would go through all that again to have him. 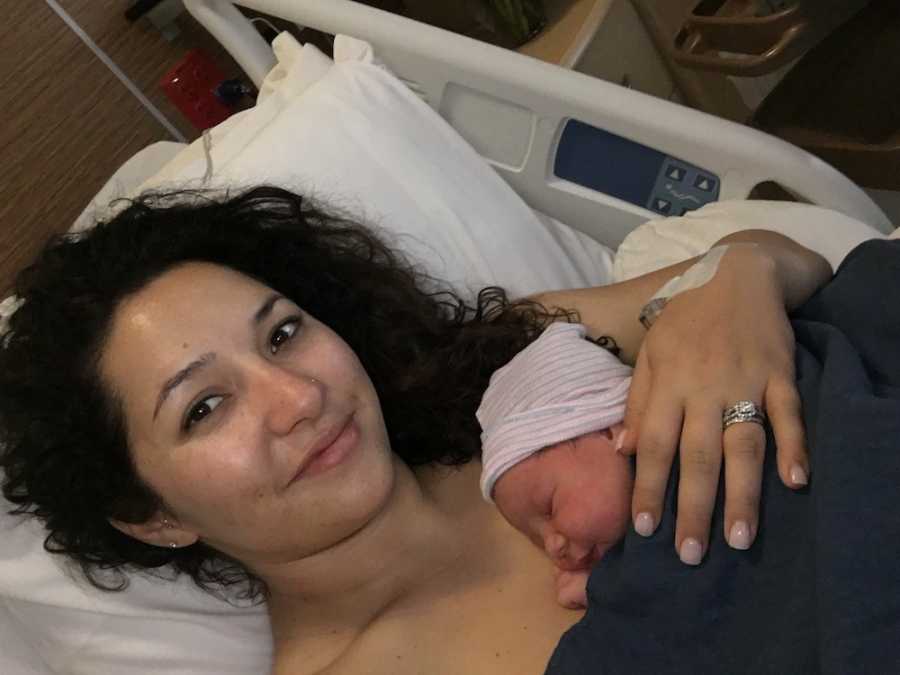 He is my everything. He is my Sunshine. 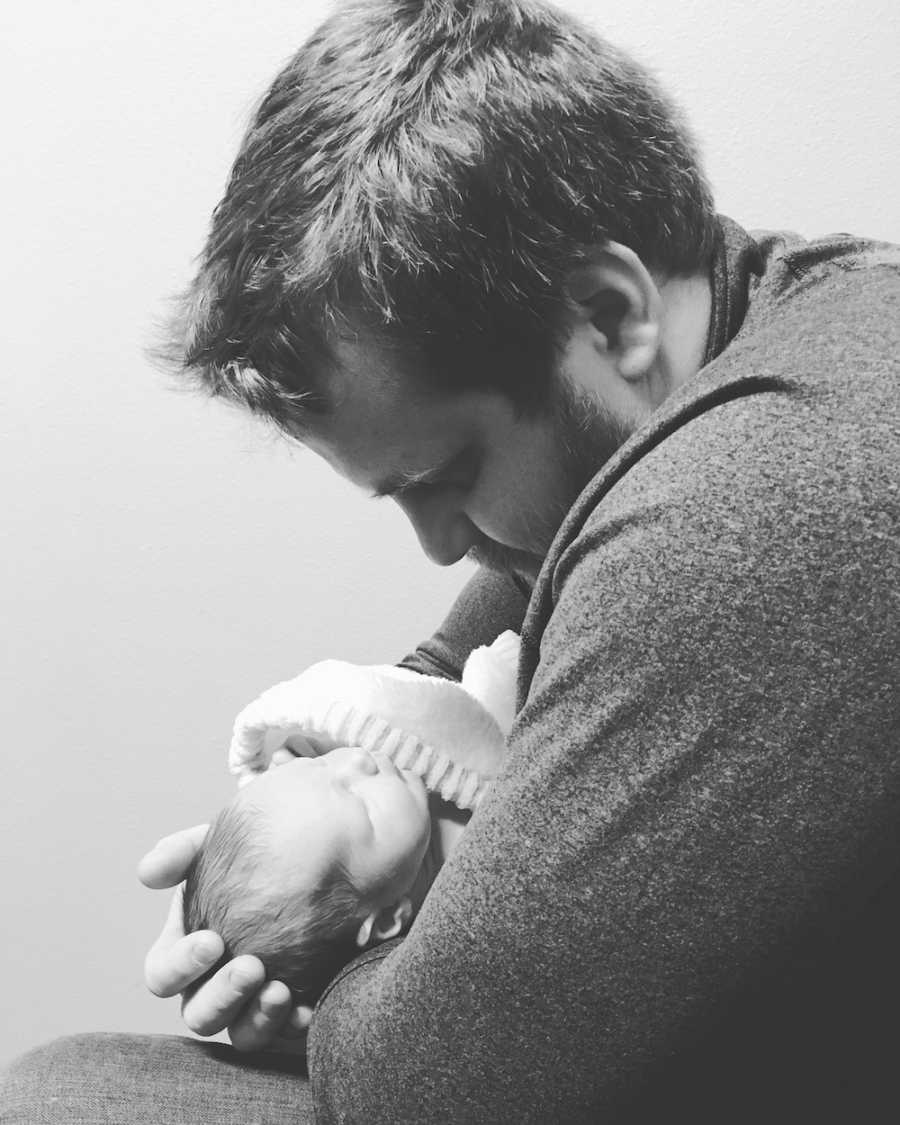 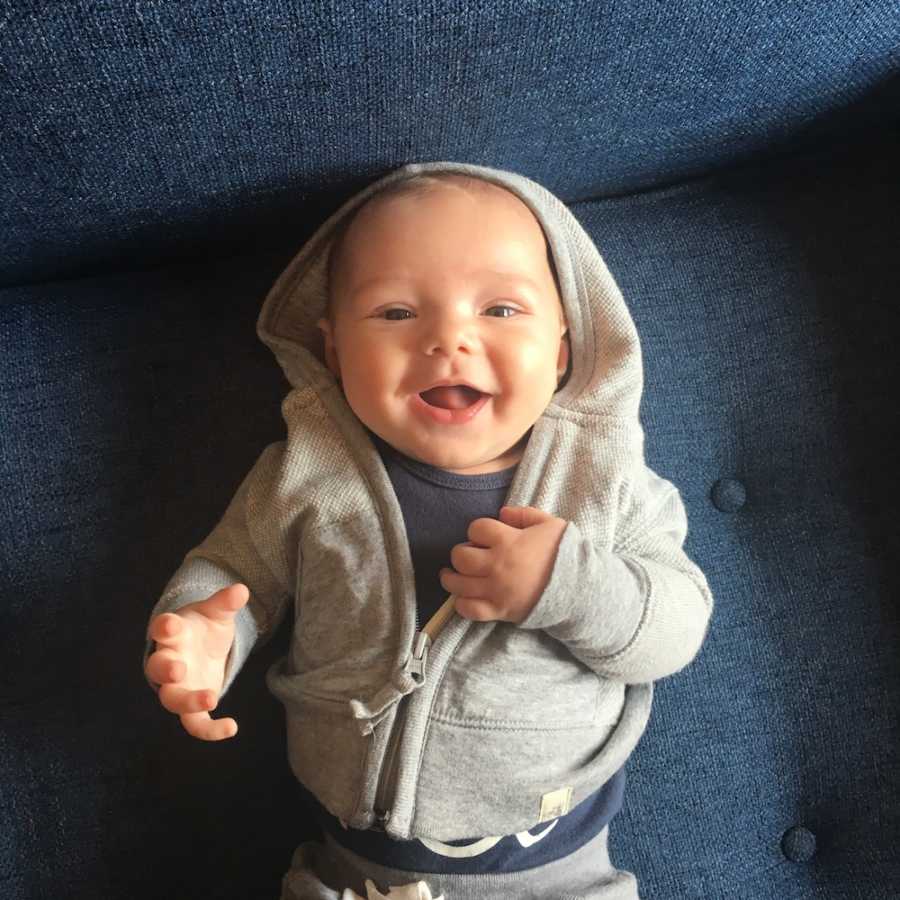 This story was submitted to Love What Matters by Sarah K. 30, of California. Submit your story here. For our best stories, subscribe to our free email newsletter. 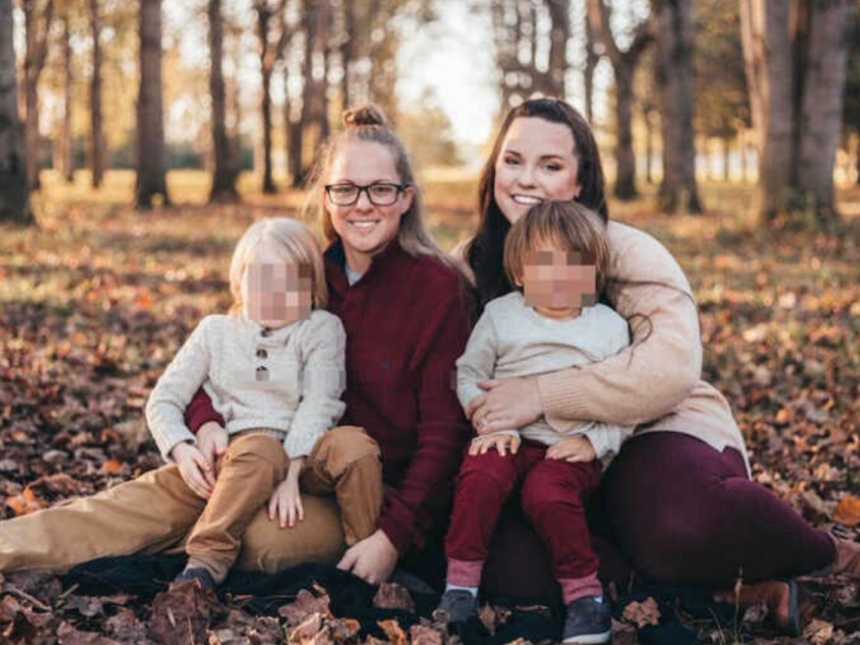