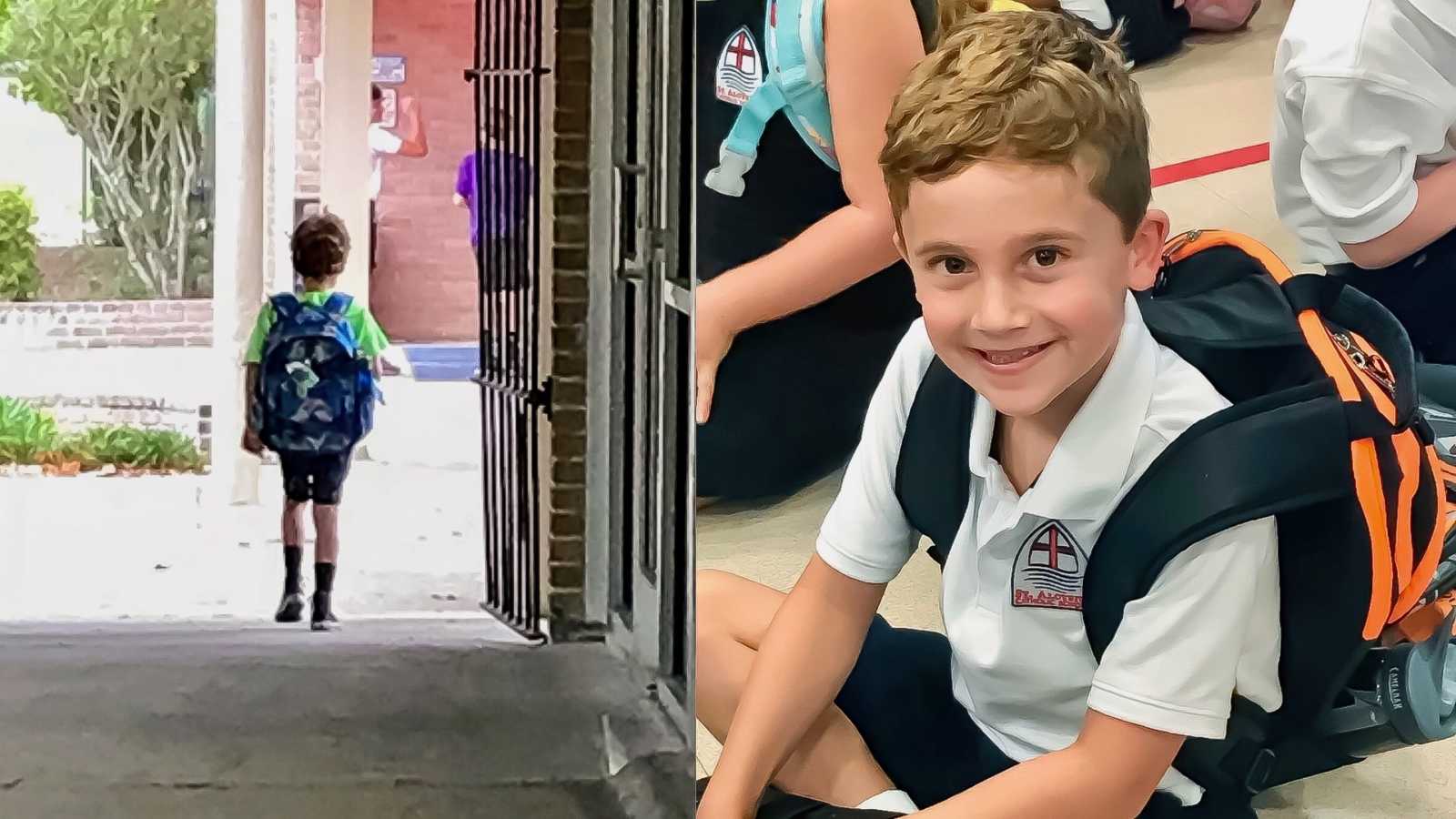 “Our bodies are amazing. When pregnant, I’d say they are miraculous. Less than 72-hours after one romp of unprotected make-up sex, I knew I was pregnant with our second child. Highly unlikely considering I was 36 years old and it was only one time, but I knew I was pregnant. Even before the stick was positive, I began counting. Always a planner, I began counting the weeks and months figuring in my head an estimate of a due date. It was early December which meant only one thing: a September baby.

Things are so different today. Like it or not, being a September baby is a thing, so it became a tiny, lingering thought tucked into the back of my mind. Then I found out I was having a boy.

A September Boy. I was having a September Boy. I was already thinking way far down the road and clearly so was everyone else. As the years went by and the date grew closer, I could feel the other mothers shift uncomfortably when they would ask me the question, ‘What are you going to do about school?’

All of the moms I spoke with who held their late boys back, all were overwhelmingly happy with the decision. Several who didn’t, and whose sons had to repeat a grade, regretted having to go through that; as the social pressure was difficult. They specifically told me that if they had to do it all over again, they would have held him back. They all encouraged me to think about holding him back because of the advantages he will have in the future. There were many reasons to consider: fine motor skills, ability to follow directions, maturity, and more. For some, the common theme had to do with the physicality of boys. They echoed the same sentiment: he will be older, bigger, faster, and taller; which will be way better than being younger, smaller, slower, and shorter.

Full disclosure, I am an educator. I was a classroom teacher for years and now I am at the university level preparing students to become teachers. I hold a Doctorate in Special Education, which, by the way, has proven to be utterly useless when it comes to actual mothering. I know teaching, best practices, milestones, progress, and developmental appropriateness. I also know that today, Kindergarten is the new first grade. I also know our school. I also know what will be required of my September Boy. Just because I knew all of this, didn’t mean I knew what to do.

I decided to red shirt my September Boy but not for the reasons you may think.

Our school registration process starts in January and for months leading up to that date I was in a constant state of, Should I? or Should I not? If I start him too early there could be consequences. If I start him too late there could be consequences. Some days I was hoping for a third option. I knew I would have to rely on a solid mix of my professional knowledge coupled with what my September Boy was telling me. I would ultimately let him be my guide.

My September Boy is smart and very able, and certainly could have managed through the year starting Kindergarten at 4 years old. But in the months leading up to registration day, I realized that while he certainly could manage, I wasn’t totally sure that he really had to manage. I watched him one particular morning, in his pajamas with the side of his head planted flatly against the hard floor, investigating the structural integrity of his Lego suspension bridge. He had a laser-like focus, studying his structure, thinking and strategizing his next block. He would test his engineering prowess with a line of 13 tanker cars pulled by his favorite powerful steam engine.

In that moment, I saw it. This was no longer a decision that I had to make, instead, it was a decision that I could make. I saw that my September Boy had the gift of time, and I was determined to give it to him.

For the next year, we gave him the gift of time. He had one more glorious year to be little.

Like it or not, there are certain demands placed upon our school-aged children. These demands are exactly what made being born in September way more than just being born in September. While I am not necessarily ready to fight the status-quo, I can certainly do what it takes to protect my child from the effects of it.

I decided to red shirt my September Boy and it was absolutely the right thing for us. As our school year is approaching the end, I see that giving him the gift of time was the best gift we could have given him. He started school when he was ready, which translated into being confident, happy, and excited about learning. He loves school in a way that I doubt he would have felt without having the extra time. I definitely gave him an advantage, but not one that had anything to do with his future physical abilities. I have no idea if he will be bigger, taller, or faster than the other boys in his class, and quite frankly, I’m not sure that I care. What matters to me now is that he is a happy, vibrant, little boy who adores school and I’ll take happy over fast any day.”

This story was submitted to Love What Matters by Melanie Forstall, 45, of Baton Rouge, Louisiana. You can follow her journey on Instagram here and Facebook here. Do you have a similar experience? We’d like to hear your important journey. Submit your own story here. Be sure to subscribe to our free email newsletter for our best stories, and YouTube for our best videos.

‘Well, why didn’t you?’ She stared at me blankly. Her question stuck with me for months.’: Mom learns important lesson in politeness after daughter’s candid question

‘I feel something.’ Not a single OBGYN had ever touched me above the shoulders. Now I am different.’: Woman diagnosed with thyroid cancer after switching doctors, ‘I panicked’

‘What’s that?’ I grumbled. ‘Your dad bought you things while you were in surgery.’: Woman diagnosed with thyroid cancer learns important lessons from father through poignant gifts

‘This doesn’t make any sense!’ I made a proposal. The only valid excuse for backing out would be death. Otherwise, we show up.’: 44-year-old best friends vow over a ‘pinky promise’ to remain connected