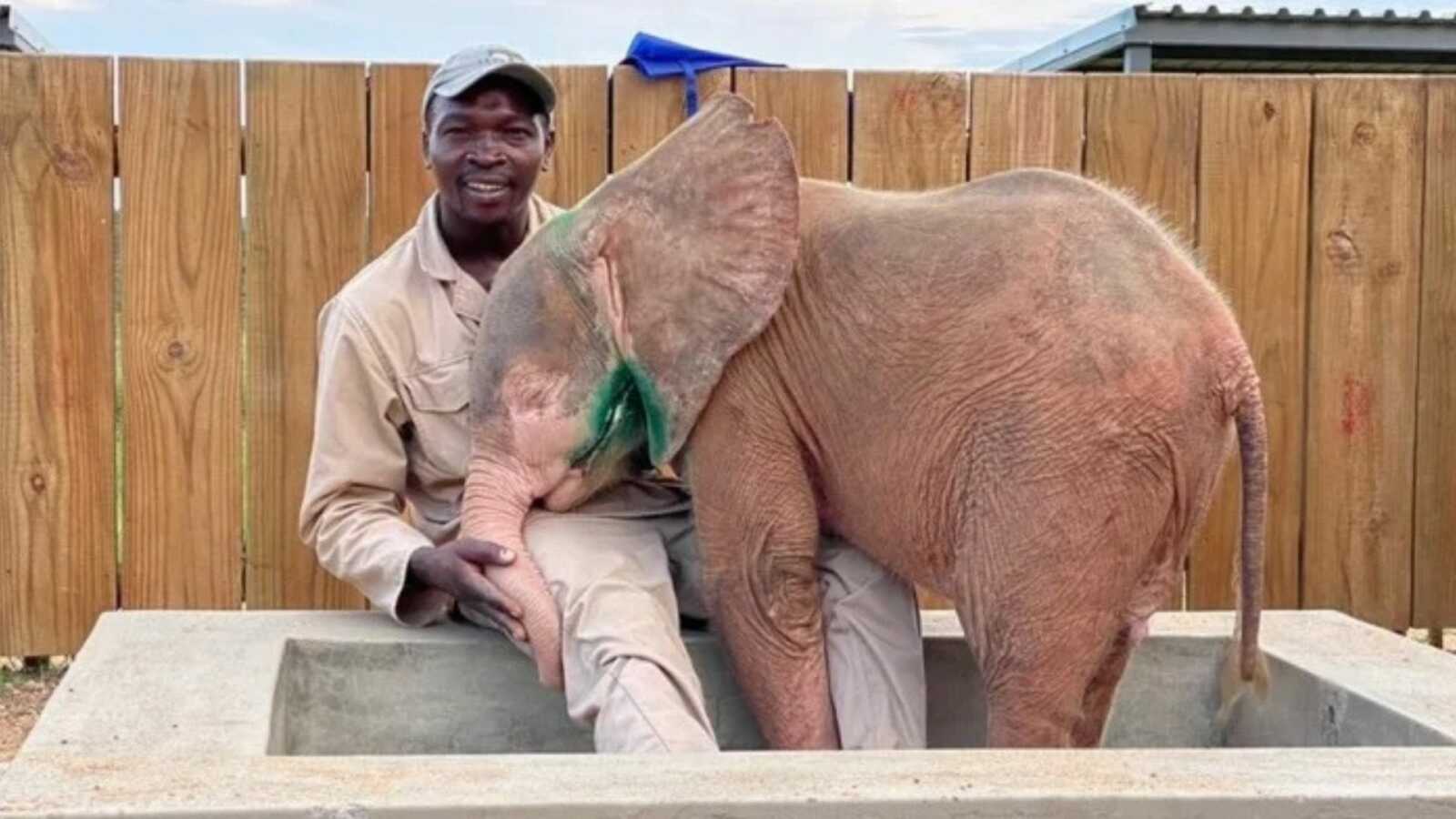 When Khanyisa first came to Hoedspruit Elephant Rehabilitation and Development (HERD) in South Africa, they weren’t sure she would make it.

Adine Roode, the founder of the elephant orphanage, received a call in January about an albino elephant calf who had been wandering alone for days wrapped in a snare. Adine was amazed that she had survived that long, but Khanyisa was just beginning to prove how resilient she is!

Whenever she went outside, her carers held up umbrellas to protect her from the sun. They also had to keep her away from the other elephant residents at first so she had time to heal, but that didn’t stop Khanyisa from greeting them at the fence.

Clearly, she longed to be with her own kind. In the meantime, her human carers gave her all the love and attention they could. The little one received regular bottle feedings, blue antibiotics on her cuts, and plenty of snuggles!

The tiny elephant also found a surrogate mother in Lammie, a resident sheep. The two of them hit it off immediately and can’t get enough of playing together!

As the months passed, Khanyisa gained weight and grew stronger each day.

Finally, it came time for her to meet the elephant herd! First, she was introduced to Jabulani, and their encounter couldn’t have gone better. It wasn’t long before the other elephants had fallen in love with her too!

Since then, Khanyisa has healed from her wounds and officially joined the herd. Not to mention, she’s inspiring thousands with her story!

“We are so proud of Khanyisa’s little brave heart and determination to survive,” HERD wrote. “Being part of her rehabilitation this far has been a privilege.”

What a courageous calf! Despite losing her original herd and enduring so much pain, Khanyisa’s playful, loving spirit has always come through. Thank you, Adine and everyone else involved, for giving this sweet girl a second chance!

See more of this cutie’s recovery in the video below.

‘One day he sat me down and said, ‘Stop bullsh-tting. Start your OWN non-profit.’ It was the little push I needed.’: Young woman opens non-profit animal rescue

‘We have a kitten with no eyes.’ He looked like a mini Frankenstein monster. Instantly, we became advocates.’: Couple shares animal rescue missions, ‘I never planned to own my own personal zoo’

‘You’re not essential, you just work with animals. That could never amount to helping humans.’: Vet technician says ‘they may not be humans, but we are just as important’

‘Can I murder the baby now?’ My first day back to work from maternity leave, I got a text.’: 3-month-old shaken baby survives ‘extensive’ brain damage

“I called his father. ‘What happened?’ He didn’t have much to say. I choked down tears and made my way to the hospital. After x-rays, I was told they suspected child abuse. My baby was bleeding in his brain due to non-accidental trauma. I immediately went to his father. ‘How could this happen?!’ He just kept repeating, ‘He was choking on milk.’ I was enraged.”