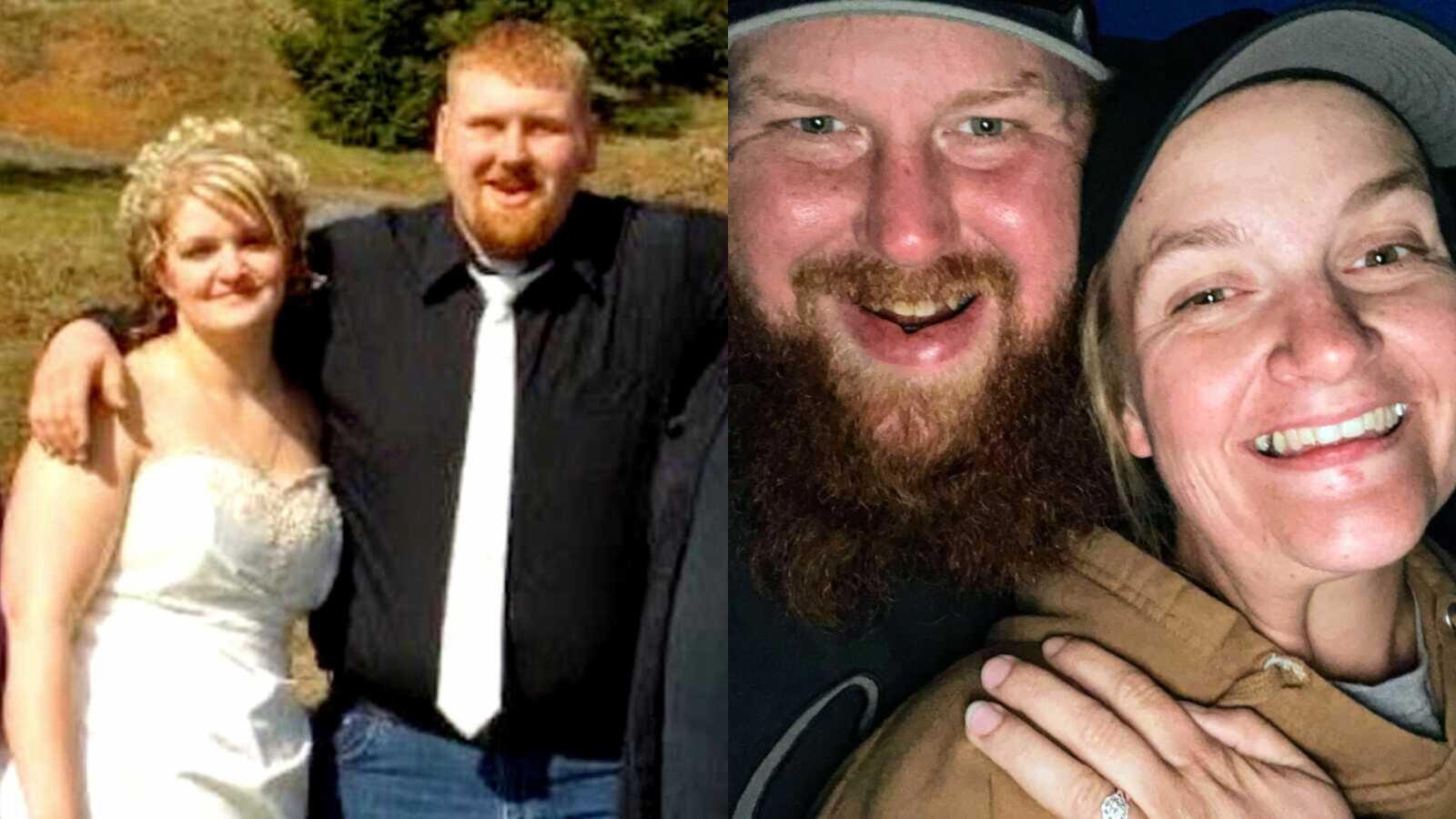 Disclaimer: This story contains details of domestic and sexual abuse that may be upsetting to some.

“I was a 21 year old, living life! I had just graduated beauty school and moved back to my hometown. My grandfather was dying of cancer and I wanted to be close to him.

I had been hanging out with some friends and they introduced me to my now ex. He pursued me for a month and finally I agreed he could go out with all of us. That night I had just three sips of my drink and everything went black. I woke up the next morning in his bed. My heart sank, and I instantly knew something wasn’t right. I got dressed and took off very quickly.

I avoided him for weeks after until I found out I was pregnant. My mom encouraged me to stay with him and so did my pastor. With their pressure, I agreed to try to make it work. I moved in with him and he immediately started isolating me from everyone and restricting my money. He took away my car and forced me to quit my job.

Whenever I would get the chance to talk to my mom, which was few and far between, she would tell me ‘stick it out.’ Soon, the attacks began getting worse and worse. We lost our apartment and moved to a town 40 miles away.

I realized I needed to get out after one night when he came at me from behind and stabbed a butter knife so hard into my abdomen it punctured about an inch and left a scar. The next morning I woke up to a Uhaul and him telling me, ‘We’re going to my moms for a better life.’ His mom was 300 miles away and she was just as evil as he was.

Once we arrived, I was very rarely allowed to leave a 10×10 room unless I was cooking or cleaning for them. I had no contact with my family. I was told to contact them once a week by email but he would rewrite my emails. His mother would allow him to abuse me right in front of her and even egg him on.

At one point I tried to leave and I walked 3 miles in July, 9 months pregnant with no money, just the clothes I could carry. I got to a gas station and a young girl helped me get to the train station. She did not know he was waiting for me inside to take me back. 2 weeks later, I gave birth to my beautiful daughter.

Hope For The Future

No one in my family knew I had given birth. She was so precious and tiny and I swore to protect her with my whole being the second she was born. I knew I had to get out. I collected every dime, nickel, and quarter I could find and bought myself a train ticket and left.

He followed of course and I spent the next three months trying to get away from him. He attacked me and raped me when I was 4 weeks postpartum. This resulted in yet another pregnancy. I chose to have an abortion but managed to hide it and tell him I lost the baby. At this point, I had nowhere to go.

He told me I could stay at his friend Kadie’s house. I had no clue what I was getting myself into but my gut told me to agree. Kadie, still to this day, is my best friend! I immediately knew I could trust her and that she would help me.

She allowed me to stay there and she helped me find the strength to fight back. The night my ex went to jail was after hours of being attacked and finally Kadie was able to help me get away from him.

He went to jail for 24 hours and was released on a release agreement. The agreement was he was to go straight to Washington. Instead, he hung around town unsupervised. I felt very unsafe. Living like this, looking over my shoulder, truly began wearing on me. Kadie suggested hiring a bodyguard, so I asked our silly friend Derek if he would do it. Little did I know, I would fall in love with him and he would save me!

He went to every court date with me and was with me whenever I needed him. It was so weird to have someone not want something from me for the first time in my life. I knew right away I wanted to marry him, but I was scared I was misreading the situation and mistaking feelings. We decided to go our separate ways after my daughter was getting old enough and started calling him dada. 2 weeks later though, he came back and told me he couldn’t live without us in his life.

We got married 2 weeks from that day. Like everything else in our story, it was not planned. My ex had filed for joint custody and I had to prove how I was providing for Gracie. My mom and friends were helping me provide for her at that point, so the lawyer suggested moving to my mom’s house in order to show a stable home to the court.

The only problem was that my mom lived 300 miles away. When Derek came home from work, I told him, ‘We are moving to my moms.’ He immediately said, ‘Let’s get married.’ He wasn’t joking around, as we got married 3 days later and had a very nice wedding.

This all happened so quick. I went from being a 22-year-old newly single mom leaving a very violent, evil situation to a newlywed in the matter of weeks. No one thought our marriage would last a week let alone 13 years. We have had our ups and downs, but in the end we always have each other.

Light At The End Of The Tunnel

This journey was one of the hardest things I have been through. but in the end it is what made me who I am today. It changed me in a way I never thought it could. It helped me see even in your darkest times, there is always a light. Derek, also known as Big Red, is a person I thought only existed in dreams. He is kind, loving, sweet, and giving. Not only to me and our family, but to every person he meets.

He has helped me through my journey of healing. He has been patient when he shouldn’t have been patient. He has stepped up as a father and a husband when no one expected him to. Him and his whole family accepted both Gracie and I into their families with open arms and have never treated us differently.

Today, Derek is a contractor and I work with autistic children. I am taking a break from teaching and working on writing my book. We live in a small community in North Eastern Oregon with our 3 children. Recently, we began making TikTok’s that raise awareness about domestic violence and helping others see they aren’t alone.

This topic is hidden or dismissed way too much. Most of the people in my current life did not even know our story or what I had been through because I had felt shunned if I spoke about it. That is a stigma that needs to be abolished.

We also used our platform to show others that you can grow and heal from whatever took place in your life. Our daughter Gracie is also a DV survivor but has recently been diagnosed with autism and Tourette’s and we document her journey also.

I want others to know we are here to help them! After all, it as a group of strangers who helped me and saved me at my lowest point.”

This story was submitted to Love What Matters by Elise Stevens of Union, Oregon. You can follow her journey on Instagram, TikTok, Kickstarter. Submit your own story here, and be sure to subscribe to our free email newsletter for our best stories, and YouTube for our best videos.

‘Deep within, I knew this could not be my forever. I had to get out. If not for me, then for my son’s sake.’: Domestic violence survivor shares journey from abuse to fierce self-love

‘My abuser always told me, ‘No one’s going to marry you now with that ugly hand.’: Domestic violence survivor gets loving husband’s handwriting tattooed beneath stab wound

‘We either need to end things or get married.’ I was completely blind to what she was doing. I thought I’d found my forever.’: Domestic violence survivor urges ‘you will find love’

‘On my daughter’s birthday, I woke up in a garage to him trying to douse me with gasoline.’: Domestic violence survivor says ‘if you need a sign to leave, this is it’