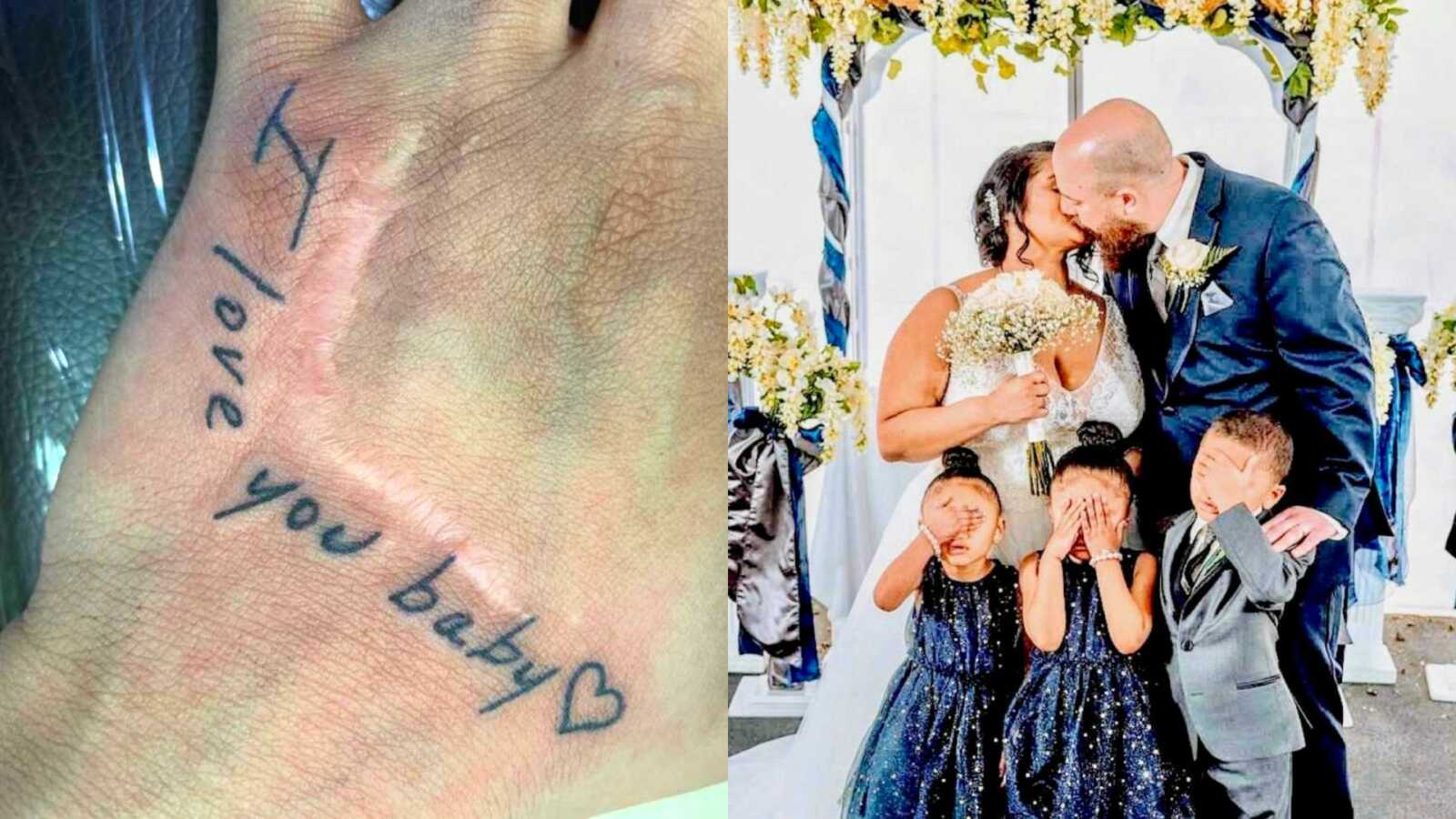 Disclaimer: This story contains details and graphic images pertaining to domestic abuse that may be upsetting to some.

“For many years I looked down at my hand and thought, ‘Wow that’s so disgusting.’ The scar is located on my left hand and before it was healed completely, it looked terrible; it was so painful that at one point I couldn’t even get my fingers to open fully. I had to go through 5 different surgeries before I had a functioning hand again.

My wedding finger was ‘ruined’ back in 2011. I was in a very abusive relationship and one of the worst things my abuser did to me was stab me through my hand, breaking the bone of my left ring finger.

I remember when the incident happened it was in the wee hours of the morning, and my abuser was driving me to the ER due to how much blood I was losing, and it was obvious I was going to need help. On the way there he was spewing out guilt trips about what would happen if I told them the truth. How my son would grow up without a dad and telling me that what happened was a mistake, and being in the vulnerable position I was, I believed him, and at that moment, I made the decision to lie to the doctors. Not only did I lie to the doctors, but I also lied to my family and friends. I remember walking into the ER and asking the doctors, ‘Am I going to die?’ I kept reminding myself to breathe and that everything would be okay.

When my abuser stabbed me, he did it with such force that the blade completely broke off the knife. The doctors did some X-rays, and it was decided that I was going to need surgery. Once I got out of the X-Ray, I realized my abuser had left me in the hospital alone. I called his mom to let her know the truth about what happened and I was met with gaslighting. She told me, ‘This is your fault because you made him too angry.’ After I heard that I felt so alone, but thankfully I did not have to worry about my son because my mom was taking care of him.

The doctors gave me some pain medication which had me in and out of sleep until they finally woke me up to wheel me down to surgery. My abuser showed back up right before I went into surgery, and he told me he would be waiting for me when I got out.

After surgery, I was wheeled to a recovery room where they helped me come out of the anesthesia. I will never forget the sweet tiny nurse who approached me and started whispering to me, ‘Hunny, hunny, what was it that you told me?’ I was in such a fog I was not sure what she was referring to. She continued and told me, ‘Hunny, you told me your boyfriend did this to you.’ I was able to look up, and right behind her, I see my abuser.

Once I noticed him standing there, I knew there was no way I could tell her the truth. I pretended to still be out of it from the anesthesia and laid back down. It was obvious to me that after that incident, I needed to get out of this toxic environment. I began to plan my escape, which took me a couple of years and another pregnancy. I know this may seem very confusing to people who have not been in an abusive relationship, but I knew deep down what needed to be done.

It was as if I couldn’t get it together to leave. It required a good chunk of money that I did not have, self-assurance that I would be able to do this on my own, and the constant fear that I would never truly be free from him. I felt like I was watching my life from an out-of-body experience where I had no control but wanted control so bad. My abuser would always tell me, ‘No one’s going to want to marry you now with that ugly hand.’ It took me 3 years to permanently leave my abuser after the stabbing incident.

As some of you may already know, I met my husband Brian in 2016 and we married in 2018. (You can read our previous story here.) I would look down at my hand and feel pride that I was able to overcome and leave with my own life but still sad that I went through such a dark time. I discussed it with Brian and I asked him if he would write, ‘I love you baby’ with a heart, which is how he always signed his cards to me. I wanted this to be tattooed below the scar on my left hand. I knew that the scar was always going to be there, but I wanted it to be a reminder of the unconditional love that I have found, and all the good and happy memories that I now share with the love of my life.

Getting the tattoo brought out a lot of raw emotions and a lot of pain that was still buried inside. When I walked out of the tattoo parlor with my husband’s handwriting tattooed on my ‘ugly hand,’ it was now something beautiful.”

This story was submitted to Love What Matters by Tiffany Durlak of Antioch, IL. You can follow her journey on  Instagram, Facebook, and TikTok.  Submit your own story here, and be sure to subscribe to our free email newsletter for our best stories, and YouTube for our best videos.

‘I like you around my mommy because you don’t yell at her.’ The judge thanked him for stepping up. I couldn’t hold back my tears.’: Woman marries ‘fairy tale’ man after abusive relationship, new husband adopts her 3 kids

‘My daughter said ‘Daddy!’ the first time she met him. I was mortified. I thought my abusive past would be a deal breaker.’: Stepdad adopts wife’s 3 kids after her abusive relationship, loves them ‘unconditionally’ as his own

‘I got a text, ‘Can’t wait to spend more time with you.’ I never thought someone would be interested in taking on my baggage.’: Stepdad adopts wife’s 3 kids after her abusive relationship