“My husband and I struggled with infertility for 6 years. After numerous blood tests, exams, ultrasounds, injections, doctor visits, 5 failed IUIs, and other infertility procedures our savings account was depleted… Whatever we put in was immediately taken out to cover costs. We felt lost and helpless. After lots of talking and praying, we decided to take a break from it all and just let God lead. We weren’t sure how we were supposed to become parents, but we knew in the very depths of our bones that God’s plan was much bigger than the one we had mapped out for ourselves.

A few weeks later I overheard my co-worker mention that she had adopted two of her daughters from foster care. After speaking with her for a few weeks, and then talking with my husband, we decided on that on the exact day of our 4-year wedding anniversary we would take a leap of faith and begin the process for becoming foster parents. We promised ourselves regardless of what happened, we felt called to help these kids, and maybe, just maybe, it would be how we would become parents. Six months later, we received a phone call that changed the trajectory of our story.

Feral:
1. in a wild state, especially after escape from captivity or domestication.
2. resembling a wild animal.

That’s the word they used to describe our little girl the day she came into our home. Sounds kind of terrifying doesn’t it? I’m sure someone contemplating becoming a potential foster parent may be reading this right now and be petrified that they will get a call one day for ‘that kid.’ The delayed kid, the naughty kid, the rude kid, the troubled kid, the angry kid, the pyromaniac, the traumatized kid. Well, let me tell you about our girl, who was indeed ‘that kid’.

She couldn’t tell us what her favorite color was or sing the ABC’s. She couldn’t tell us what she needed or wanted, or if she was scared, or happy, or sad. The first couple days she’d either scream at the top of her lungs, or cry. Then, she added on shaking her hands back and forth, or singing gibberish noises. She was quite literally an infant walking around in this fragile 3-year old’s body, and it shattered our hearts. Deciphering her version of communication required a lot of patience and energy. From the second she set foot into our home our hearts worried for her.

How is this even possible?

Will people ever accept her for more than what they see?

Would kids her age play with her? Or worse, would they make fun of her?

How could we help her? Where do we even start?

Even with all of our concerns, we knew she was full of magic, it was just that no one had ever shown her how to sparkle. We were 100% committed and determined to show people, especially the multiple professionals who attempted to convince us that she may ‘never overcome her barriers,’ or ‘never be up to par,’ that they were in fact, foolishly wrong. Because, we believed she was not a byproduct of the circumstances she had involuntarily been subjected to. Her past would not define her future, and at the end of the day, that’s truly all “those kids” need: Someone willing to go to bat for them, to invest in them, and love them even in the toughest of times.

Friends, I would be lying if I said it wasn’t hard. It drained me. I would eat, sleep, and breathe this child’s progress. I dedicated each day of the week to a different learning activity. I made flash cards. I made up songs. I made learning and progress charts. We played games. I bought books, and puzzles, and toys. I wholeheartedly REFUSED to have her leave the same way she came in, if that day ever were to come.

After the first couple weeks, I asked teachers and others around her how they thought she was doing with social interactions and speech, or if they noticed a change in her. Almost every time I asked the question, it was as if it pained them to respond. So most of the time the phrase, ‘She’s doing okay.’ was used as a Band-Aid for what they really meant. It was as if they had this preconceived notion, a crystal ball if you will, and had already determined who she was, and who she may always be. They saw her as the little girl who couldn’t, the little girl who, in their minds, may never be ‘just like the other kids’ …and y’all, those words ate me alive. It made me physically nauseous. I cried my eyes out for months, fearing what walls people would place in her path without giving her the benefit of the doubt. She didn’t deserve that kind of inferiority complex at 3 years old, and I wouldn’t dare allow anyone to look at her with misplaced pity, and assume she wasn’t capable of being more than who she was in that very moment.

But, truth be told, they were right. She wasn’t like the other kids. She had endured more in her short 3 years of life than most adults I know… & being ‘ just like them’ meant that her story wouldn’t serve His purpose for whom God intended her to be. I was once told by someone in the foster care system, ‘You have to remember that these kids aren’t the cream of the crop.’ And those words stung me so deep. How did they know what ‘these kids’ were capable of? The truth is: THEY DIDN’T.

Day by day, she began to show progress. First it was mimicking animal noises, then one word, then two, and before we knew it she said her first sentence! When we took her back to her speech appointment a few weeks after her first consult, I’ll never forget the therapist saying that she was in awe that our daughter could even speak one word let alone two! She mentioned that, at the time, our daughter may have been one of her most tragic cases she had ever had in her career thus far and thought that it would be a month or two before progress would happen.

After 6 months of speech therapy and working with her every single day at home, she had progressed 1 year’s worth of growth! After two years, she EXCEEDED her age range in testing for both speech and cognitive behaviors.

The kid was UP TO PAR.

We might have sat beside her, and guided her along the way, but SHE put in the work. She never, not even once complained or whined. (Hand to God). She was hungry to know more, and it showed. She never stopped trying, and when she conquered one goal, she immediately moved onto the next. She was never forced to challenge herself or ask Daddy and I to help her with flash cards, or colors, shapes, or animals, or letters… but she did.

You see, try as I might to make this foster care journey as transparent as possible for those who want to know, so that you may understand the mess and the message that comes with this role and it’s responsibility, there are parts of our children’s stories that will never be shared between anyone other than the two of them when they are much older.

‘That kid,’ our kid, is full of power. Her story is just one small reminder to us that we should never judge a book by its cover, a foster child by their circumstance, or underestimate a single person’s potential, including yourself! This one small part, we’ll expose to you, and proudly remind her of as often as we can, because she should know she defied the odds and she should wholeheartedly believe in herself even when no one else does.

So, when we walk our little warrior to school this week, and she bravely lets go of our hands to head into her first day of kindergarten, I know without a doubt that she will be okay, because now she knows exactly how to sparkle on her own.”

This story was submitted to Love What Matters by Amanda Ogden, 29, of Great Falls, Montana. Submit your own story here, and subscribe to our best stories in our free newsletter here.

‘I have the ‘wild child.’ The one that’s loud. That NEVER listens to ‘no.’ I feel guilty. ‘Was I too hard on him today?’: Woman claims ‘wild child’ moms are ‘trying harder than you know’

‘Some children are just born feral. If a know-it-all wants to tell you otherwise, go find them a drunk and hungry hyena. Shove it into some Doc McStuffins pull-ups and drop it off at their house.’: Mom accepts her ‘feral’ child can’t be tamed

‘Blake’s not breathing!’ The daycare called. He was laid on his back, and found face down in the pack n’ play.’: Mom sees ‘signs from heaven’ after losing son to SIDS, delivering 2 rainbow babies

“I didn’t get any more details than that. I hung up, flew out the door. ‘Who are you here to see?’ the ER receptionist said to me. The girl beside her hit her on the arm. ‘She is THAT baby’s mom!’ She then asked for my insurance card. ‘Please, I need to see my baby!’ Before I walked through the door, I thought I heard a baby cry. I thought I had more time.”

‘We had 90 days to get married. We both questioned what we’d gotten into.’: Woman takes leap of faith in marrying man who had never met her family

“I remember talking to my Dad after the fact. He said, ‘Ronnie called me to ask my blessing. I couldn’t understand half of what he said, but I told him yes, my daughter could marry him.’ Although, not everyone had encouraging comments. I had frequent questions like, ‘What if this guy just wants a green card?’” 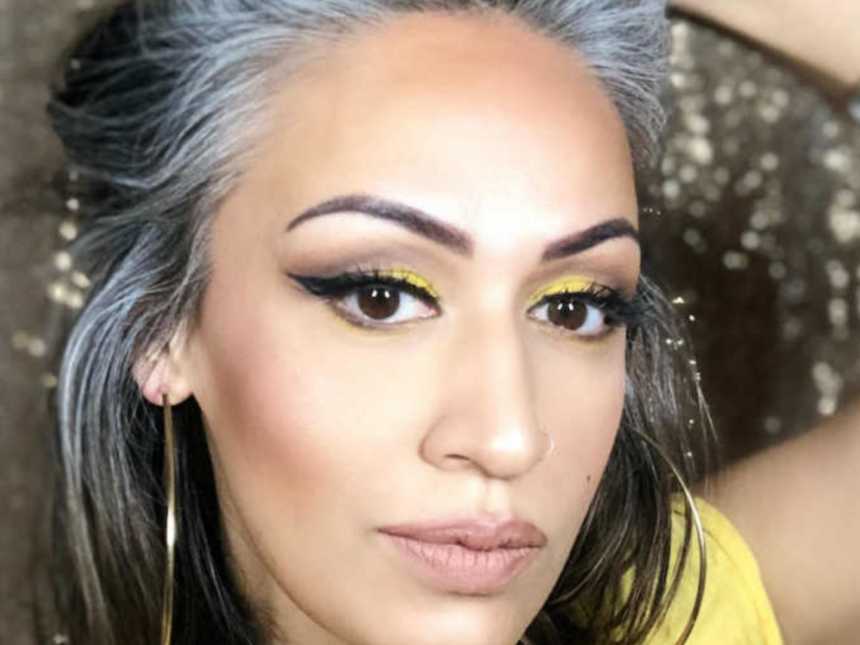 ‘Why do I feel the need to cover this up?’ I decided this was it. I went to the hairdresser, one last time.’: Woman embraces natural grays, ‘This journey is about more than hair’

“Just because a woman has grey hair doesn’t mean they have ‘let themselves go.’”

“The second they started describing Zoey, I knew she would be my daughter! I could hardly answer them to say I would take her because I was crying.”