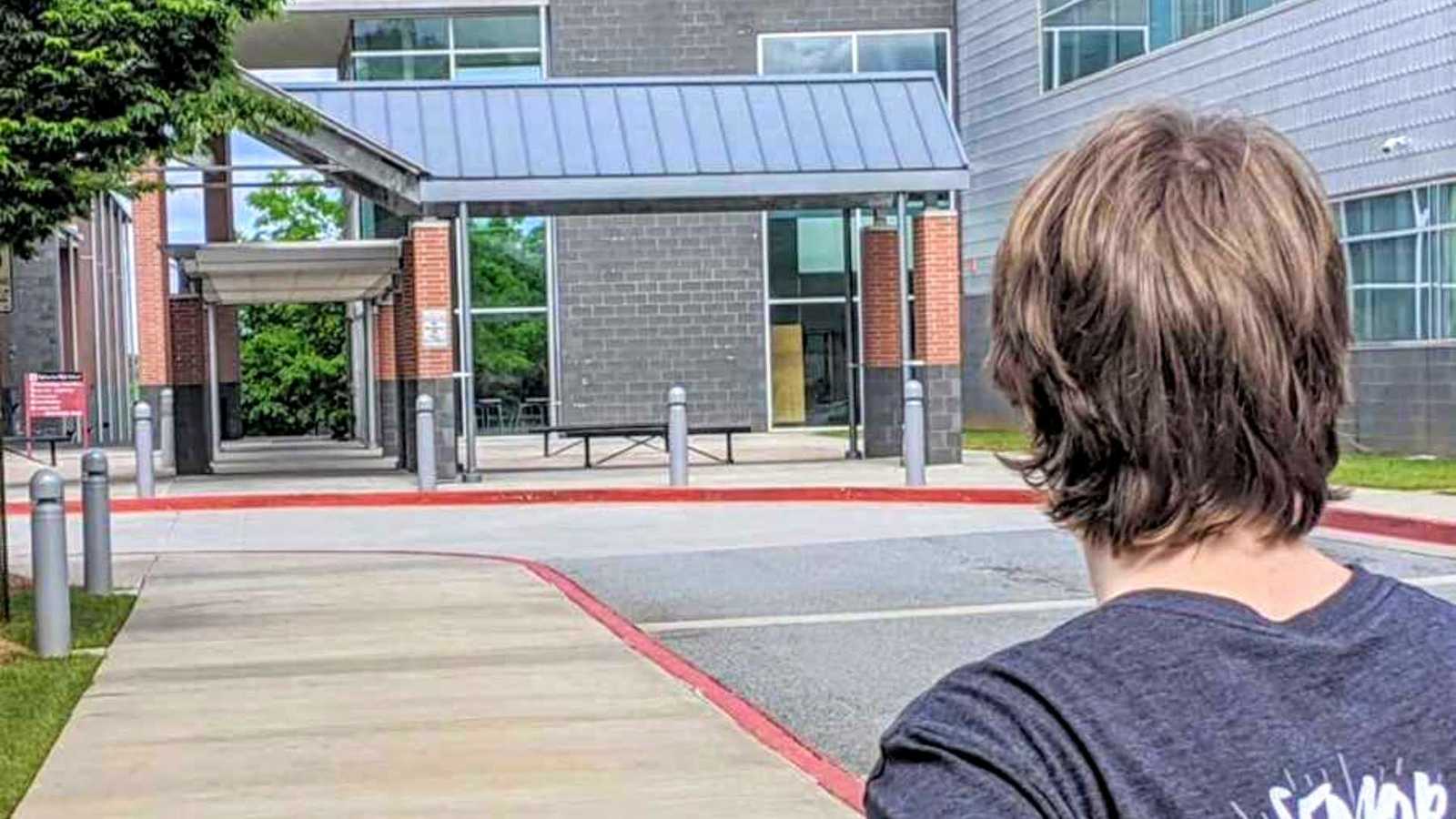 “All my son really wanted was a chance to say goodbye…

Yesterday, when my son and I were out running a couple of errands, he asked if he could stop by his high school.

When I pulled up to the empty parking lot, he asked me to park the car and said he wanted to get out for a moment and walk around. As I sat in the car watching him slowly walk the lifeless grounds of his high school, my heart ached for his loss.

He walked up to the front door and peered in – a door that welcomed him for the last four years. He walked past the windows of the cafeteria where he and his friends once gathered to eat, mess around with each other, and flirt with girls. He stood at the entrance of the football field and just stared – a field where he spent countless Friday nights cheering on his team, being rowdy, and laughing with friends.

Wearing his cherished senior t-shirt (something I didn’t realize until later when I looked back at the picture), he walked around the campus, took a handful of pictures, and slowly walked back to the car.

Like thousands of other seniors, my son is missing out on the final season of his high school year. A season that should have been filled with end-of-year events, major milestones, prom, graduation, a graduation party, and final days with friends he’s known for more than a decade.

As hard as this has been on him, he’s weathered this storm well. He’s mature enough to understand the ‘why,’ strong enough to keep it in perspective and brave enough to put this behind him and look toward his future. Still, he’s looking for closure.

I could see it in his eyes…all he really wanted was a chance to say goodbye.

Goodbye to the halls of his high school where he joked around with friends, high-fived teachers, and rushed to make it to class on time.

Goodbye to the cafeteria where the jocks, theater kids, cheerleaders, brainiacs, and every other clique came together for a few minutes every day. (The truth is, it was always about being together and never about the crappy food.)

Goodbye to the familiar routine that he found comfort in, even though some days were hard as hell.

Goodbye to his favorite teachers who believed in him, guided him, and sparked a fire in him.

Goodbye to the cute girl sitting behind him in Physics who he never mustered up the courage to talk to.

Goodbye to the pep rallies where the sound of the drums from the marching band and the rumbling on the bleachers were sometimes so loud, he could feel it in his chest.

Goodbye to the extracurricular activities he loved, the sports that motivated him, and the clubs that brought him together with other geeky kids who loved the same things he did.

Goodbye to the high school dances he deep down inside dreaded but would give his right arm to attend just one more time.

Goodbye to getting called on by his annoying teacher who always somehow knew he wasn’t paying attention or wasn’t prepared.

Goodbye to the cool teachers who knew the seniors were stressed and let them slide by with an easy A.

Goodbye to the study hall where he never really studied, but just spent the entire time talking with his friends about the game last night, the cute girl sitting across the room, or how he and his friends planned to cheat on their AP World History test next week but never really pulled off.

Goodbye to the gossip and drama that was annoying, but also mildly entertaining knowing who was dating whom, who got caught drinking or who skipped class to go to Chick-fil-A.

Goodbye to Friday nights spent at the football games, basketball games, local pizza joint or just driving around with the windows down with his friends because it didn’t really matter where they went if they were together.

Goodbye to walking into school with the sound of the morning announcements in the background while groups of kids waited until the last minute to race to their first class.

Goodbye to being a senior – the same person who walked in just four years earlier sheepish and shy, worked his way through the ranks and emerged as ruler of the school smarter, wiser, and cautiously optimistic about this new chapter in his life.

And, goodbye to so desperately wanting to be done with high school, but now realizing what he had, how much he loved it, and what he wouldn’t give to have just one more day.

This is one goodbye my son will never have. As a self-proclaimed ‘fixer,’ no matter what I do I can’t fix this one. All I can do is listen when he needs to talk, be there when he needs a shoulder to lean on and support him when it all becomes too much and he needs to shed a quiet tear.

My advice to my son is this… every generation has a story to tell and this is yours. Look to the future and remember that life is defined by moments and you had millions of beautiful moments that can never be taken away. Carry those with you in your heart and never forget.

As for the thousands of other grieving seniors, my heart goes out to you. You have proven your strength and resilience to the world and your class, the Class of 2020, will always be remembered for its fortitude and grace. Saying goodbye is never easy, I know, but how fortunate you are to have so many memories that make saying goodbye so very, very hard.”

This story was submitted to Love What Matters by Raising Teens Today. Submit your own story here and be sure to subscribe to our free email newsletter for our best stories.

‘Dear Class of 2020, we are rooting for you, praying for you, and cheering for you.’: Woman says ‘you remind us of where we’ve been, and give us hope for where we’re all going’

‘My son’s kindergarten teacher sent out an email: ‘Schoolwork is not manageable for some right now – and that is okay.’: Mom urges ‘you can’t do it all right now, just let the rest go’