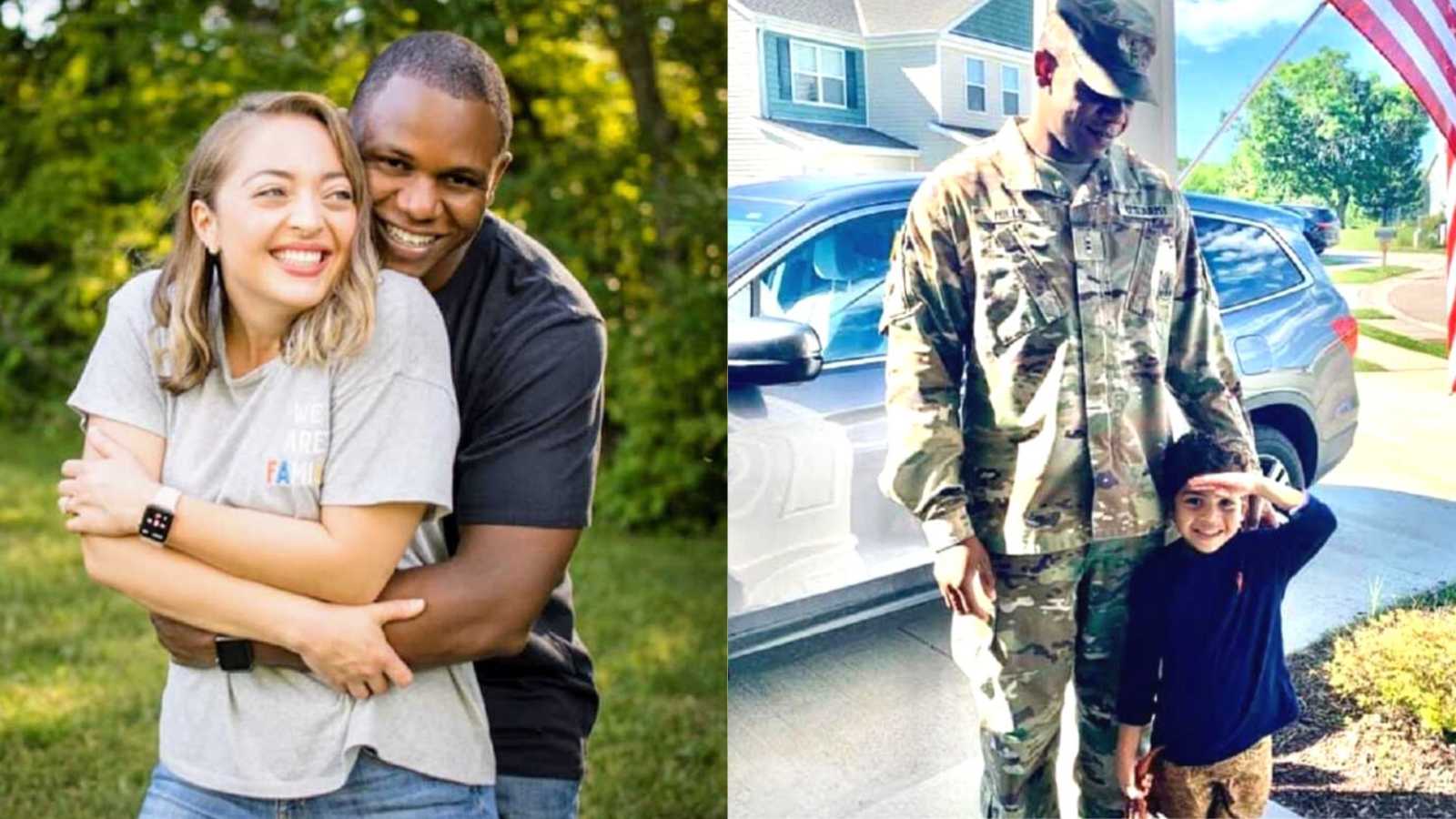 “My husband and I met online while he was stationed in Germany, where I am originally from. When we started talking, he told me about his upcoming deployment, and therefore I did not want to meet him in person (yet) because… what if I ended up really liking him and then he was gone for 12 months? He stayed persistent, though. And so, for more than 12 months we wrote emails, and Skyped. First, only once a week or so, but as we got to know each other better, we eventually talked every day or as often as circumstances allowed — all the way from Afghanistan to Germany.

I remember telling some friends about this guy who I met online, and how I would rather stay home so I could talk to him than to go out to another college kid’s party. Some of my friends were of course full of doubt and thought I was crazy. On Christmas 2011, he finally returned from his tour, and we met in person for the first time. Everyone close to me knew how excited I was to meet him, after months of just seeing his face on my laptop or writing emails. Naturally, people were reserved. You have to remember this was ten years ago, when meeting someone online was still frowned upon. However, I felt that people had even more doubts because he was an African American service member. This is when we started to realize people would look at us differently and not only see a young couple that was in love, but also project their stereotypes on us.

When we got married the same year, people questioned my sanity, and made insensitive comments and remarks: ‘They’re only getting married so he can stay in Germany.’ ‘She just wants to move to the US.’ ‘She’ll move there, and a year later she’ll be back.’ We had a lot of people to prove wrong, and I remember feeling like I had to defend our love just because it was not what people were used to. It also hurt to hear my Turkish grandmother not approve of our marriage because he was black. Although she visited from Turkey that summer and met him in person, she ignored him during conversations at the dinner table – and unfortunately left one week before the wedding. When you are young and in love, you want to share your joy with those you are closest to. You want them to approve. So, yes, it hurt. But you cannot make people see with their heart if they want to stay blind.

When my husband received orders to go back stateside, I was not done with college in Germany yet, and thus, I stayed back, also to complete my visa application. After 14 months of a long-distance marriage, I finally packed my bags, sent three boxes to El Paso, TX where my husband was stationed in the meantime, and followed him. I was excited and so ready for our new chapter together. The color of his skin or the color of my skin did not matter. I feel like there is definitely a certain stereotype, also within the military community, about German women who marry black soldiers, but we did not care, and people’s comments did not affect us. One time, someone told me that my husband ‘was different from the others.’ ‘Oh, really?’ I replied. ‘Yeah, you know what I mean.’ I knew what she meant, but I wanted her to say it out loud so she could realize for herself how narrow-minded she sounded.

Over time, you learn to ignore the looks you get when you are in an interracial relationship. You learn to ignore the stares and the little things people do that show they are not fully comfortable with two people being together when they don’t look the same. More than once, for example, we were asked if the check is separate or together – mind you, we both wear our wedding bands. Or when we traveled together as a family with our toddler, the flight attendant asked us and only us if we belonged together and didn’t provide me with an answer when I asked her, ‘Why?’

As for my husband, I can only admire his strength. People treat him differently when he is Chief, in a uniform, than when he is just a regular guy in a shirt. When people see him, or us, they don’t know our multicultural background. They don’t know he is currently pursuing his Master’s degree and is about to graduate cum laude. They don’t know that he spent half of his life so far serving this nation, that he has been deployed to the Middle East three times, that he was an instructor and now serves as a Warrant Officer. They see a black man, and before they meet him, or talk to him, or get to know him, they already have a picture made up in their head.

Four years ago, when I was pregnant with our first child, we lived in a beautiful historic district in Columbus, GA. We had just lived there for about a year after our time in Texas. We never had any issues with our neighbors; we simply just went to work on the Army base every day and minded our business. But my husband was the only Black person living on this street – and one morning we woke up with a noose hanging from a tree in our backyard. The sole presence of an African American neighbor must have been so irritating that someone climbed over our fence at night to display this threatening hate symbol. The same day we called base housing and requested to move on post.

I am sharing this with you to give you an example of how peaceful existing can still lead to acts of hate. And some still wonder why people are outraged right now? Maybe because they are fed up with having to move, with having to adjust, with having to become invisible just so they don’t have to live in fear. To be honest, it made us cautious to live off post in the future, simply because if we move to another duty station we would not know what to expect from the neighborhood, but living on post at least means that our children can grow up with other military kids who are exposed to diversity on a daily basis.

As a mother of a son who will be identified as black in this country, I sometimes fear for his safety, and I know that when he is old enough we are going to have to have discussions that parents of white children will not have with their kids. We already had to teach him not to run around the neighborhood with his Nerf guns, like the other kids do. One time, he came home from playing outside and out of nowhere, he asked me, ‘Mommy, what color am I?’ What we teach our son is that no matter what someone looks like, we are all defined by our character and by how we treat others. We reject the idea of being colorblind, of ‘not seeing color.’ We teach him to see and acknowledge differences and value them. Mommy is from Europe, thus white. Daddy is from Jamaica originally, thus black. ‘And you, love, you are both and perfect and beautiful the way you are,’ we told him.

So, while everyone has their package to carry and their own burdens and hardships in life, please acknowledge the burden falling on your Black colleagues, neighbors, and friends disproportionately. And know that they’ll never show it. I look at my husband in awe sometimes.

I grew up in a German-Turkish home, and thus I experienced discrimination in Germany from an early age on. Maybe this is what made me more sensitive to the micro aggressions and racism. What I see here in the US currently brings my blood to a boil. The country my husband serves; the country we love.

My husband, in all of this, and as a black man in the US, is so calm! You know why? Because he and millions like him have learned to navigate their worlds too well for that. And although they were told their education and the jobs and the accomplishments would protect them from being treated like second-class citizens; although they were made to believe that working hard and contributing to society would mean society would treat them like human beings, they have learned the painful truth — it’s a lie. They are not okay. And neither should you be. Whether you have POC as family members and friends or not. The Black Lives Matter Movement is not just about race, and it certainly is not about politics. This is about human rights. We all need to speak up!”

This story was submitted to Love What Matters by Esra Mills of Kansas. You can follow her journey on Instagram. Submit your own story here. Be sure to subscribe to our free email newsletter for our best stories, and YouTube for our best videos.