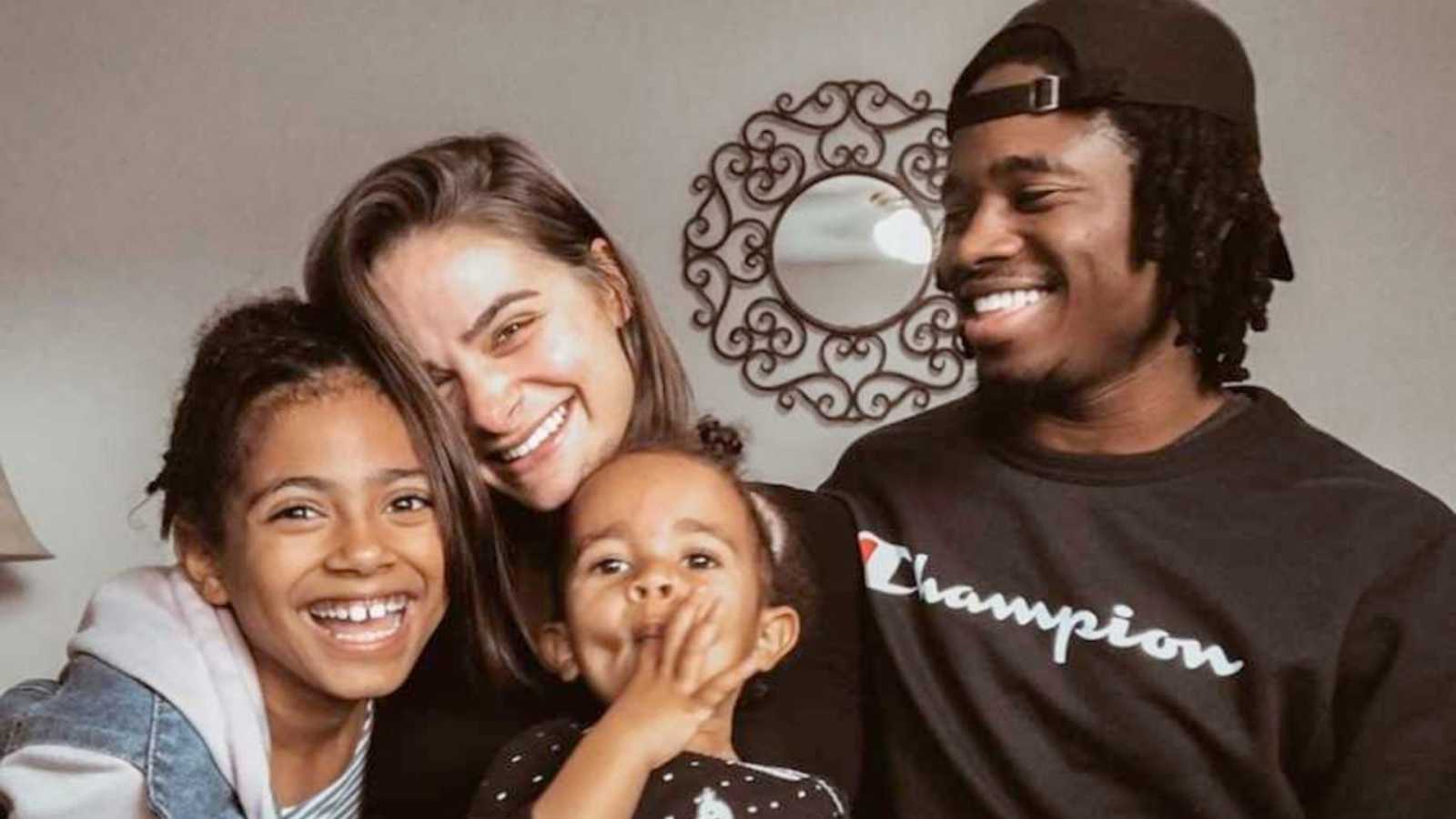 “I was put on this Earth to break generational familial cycles of division, racism, and religious stereotypes. I’m also here to share with you how all of these are tied into one beautiful, transformative story of healing, advocacy, motherhood, and marriage.

I’m the eldest of five kids. I grew up as a pastor’s daughter in an extremely sheltered home. I was homeschooled until high school. My parents decided to get divorced after about fifteen years of marriage and homeschooling was so longer an option, so I was sent off into the ‘real world.’ I attended three different high schools, and at the last high school I attended, I met my husband. My beautiful, strong, educated, black king of a husband. We were sixteen years old and both had been placed in the same English class. We were both brand new to the school — I had moved from Alaska to California, and he had moved from a few cities over. My school schedule had actually been changed four different times and the last change was what brought us together in that class. It was the only class we ever had together. We were drawn together very quickly. About three or four weeks after we first met, we were inseparable.

I had absolutely no clue what I had just walked into. My naive, sheltered, homeschooled, white-privileged self saw absolutely nothing out of the ordinary with our relationship. The world very quickly told me differently. Sure, we were from two completely different walks of life. Actually, there was very little we could relate to each other about at all.

I was intrigued by the contrast. The magnetism between us was undeniable, the chemistry was perfect, and we became best friends. He took me with him everywhere. I was quickly submerged in his family, lifestyle, and culture. My curiosity was sparked around him every day. A history and a culture that had been so white-washed and watered down when it was taught to me transformed into something so rich and beautiful and deep, with all the sorrows and historical tragedies that came along with it. Our senior year together flew by, and we started making plans to go off to college and played with the idea of moving in together. Interestingly, the longer we were together and the more serious we got, the more uncomfortable the people around us seemed to get. What was once seen as a puppy-love, high school sweetheart fling became more and more serious by the day.

And then I got pregnant.

We were seventeen years old with five months of high school left.

The world around us seemed to absolutely explode overnight. The number of offers I received from people in my life to pay for an abortion was stunning — I eventually lost count. The stares in the hallways were brutal. The comments were even worse. I was the only white person on his side of the family ever, and he was definitely the first non-white person on my side of the family. Our baby broke generations of ignorance, misinformation, hatred, and racism with her gentle presence. It was the most emotionally exhausting thing I’ve ever journeyed through, and it was worth every single moment.

My father took my pregnancy extremely personally and mentioned how I had ruined his reputation and embarrassed him. Our toxic relationship and his close-minded views led me to move out of his house the day after I graduated high school and get back on a plane to Alaska at six months pregnant, only a few days after turning eighteen years old. I rented a room from my grandmother and began my journey into adulthood much more quickly than I had envisioned only a year prior.

My now-husband, who had never been on a plane before in his life, dropped everything and flew three thousand miles to Alaska to be with us. This broke a generational cycle of fatherlessness in another moment of healing. We were married on New Year’s Eve at nineteen years old in my mother’s living room with our sweet baby girl sitting on the couch.

Our time in Alaska was tumultuous. I quickly realized why it was considered ‘the south of the north.’ We were used to the stares and my naivety led me to believe it was because we were so beautiful together. It wasn’t until the hateful anonymous online messages started flooding in, the unnecessary traffic stops started, and our toddler ended up in the emergency room for getting bit and hit in the face at her daycare until her face swelled that I started to wake up to the truth — my family was black, and black was not welcomed there.

We made the decision to move back to California. It wasn’t safe for us to stay where we were. We quit our jobs, sold both our cars, gave away almost all of our belongings, and with only a few thousand dollars to our name, hopped on a plane in pursuit of a safer life. It wasn’t easy. The traffic stops didn’t entirely stop. In fact, my husband was pulled over eight times the first three months while driving to work in a predominantly white neighborhood. We were followed and harassed by cops sometimes for miles while we drove, as they would follow behind us only inches from our bumper with their brights on. They pulled him over once for driving too slow with a spare tire on and demanded to know if he was a gang banger.

My journey wasn’t the easiest either. I was usually the only white person in the neighborhoods we found apartments in. The stares were endless. I would walk into his family-owned church and have everyone in the building turn to stare at me in silence and discomfort. The comments we received about being ‘unequally yoked’ and how God would condemn us for being in an interracial marriage poured in, adding to the fact we had conceived our daughter outside of that interracial marriage. (This is where we also journeyed breaking religious stereotypes of what a Godly family ‘should’ look like.) I would get asked regularly at the park if I was the nanny. People would approach our daughter and ask if she was lost and needed help finding her mommy. Sometimes there were even men who would approach my daughter on the playground with God knows what type of intentions because they didn’t see a black woman present and assumed my child was alone.

My motherhood became centered around educating myself as deeply as I could about black history, ethnic hair care, and actively pursuing positive and powerful friendships with black women I looked up to so my daughter could have as many people in her corner as possible.

This is also where I decided I could no longer work outside the home and leave childcare or education of my child in the hands of anyone else. I left my job in Beverly Hills and actually got a job cleaning houses as an independent contractor in pursuit of being self-employed so I could be with our daughter full time. I’m ecstatic to share I’ve now been fully self-employed as an entrepreneur for over five years now, and I get to be a full-time homeschooling mama because of that.

My husband and I have now been married for almost seven years, together for almost ten years. We have three beautiful children, Essence, Naomi, and our son, Jayden. My sweet husband finished his associate’s degree in computer-aided drafting and design, which he was able to accomplish fully debt-free taking classes consistently in his spare time while also working to help provide for us. To celebrate his accomplishment and shift our environment in pursuit of an even healthier life, we recently moved to Seattle. Yes, we moved in the middle of a global pandemic and now find ourselves in the midst of what is now considered the largest civil rights movement in history.

This season of life has been interesting for us. I’ve been extremely vocal about being pro-black and supporting the black community as we fight for equal rights both on my online platform and in ‘real life.’ That’s not new for us. What’s new is people are actually listening now. The black community is finally being acknowledged. Injustice is finally being called what it is, and the world is paying attention.

Our family is not currently the taboo. It’s a symbol of togetherness and unity. It’s been a constant shift emotionally between gratitude and exhaustion. It’s magnified my feelings of love for my children and my husband because of both the positive and traumatic images we’re seeing. It’s stirred up my fire to fight for my children and my husband, while also reminding me of how much work there really is ahead of us. It’s an honor to be in this family, while simultaneously bringing up feelings of fear for my son and my husband specifically. It’s a journey. We’re ending generational cycles of racism, not only now in my personal circle, but in the world.

I am a mother to beautiful black children

I am a wife to a beautiful black man.

I am an advocate for the Black Lives Matter movement.

I am a friend.

I will never fully understand, but I stand.”

This story was submitted to Love What Matters by Micki Morris. You can follow their journey on Instagram. Do you have a similar experience? We’d like to hear your important journey. Submit your own story here. Be sure to subscribe to our free email newsletter for our best stories, and YouTube for our best videos.

‘My children have white privilege. The skin tone hides their true identity and background.’: Mom to bi-racial family says ‘they will be major allies in this fight’